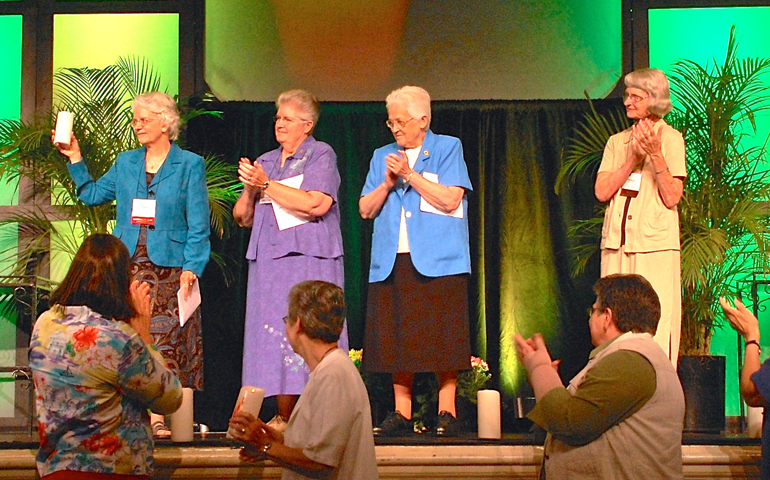 The nation’s largest group of religious sisters welcomed a new leader and said goodbye to another Friday.

The Leadership Conference of Women Religious held its transfer of leadership Friday afternoon, installing St. Joseph Sr. Marcia Allen as president-elect. Allen was the only nominee for the position.

The LCWR, made up of Catholic women religious who are leaders of their orders in the United States, uses a unique leadership style with three current officers: a president, a president-elect and a past president. All three collaborate on decisions.

“We are exceedingly grateful to you, Marcia Allen, for answering the call,” said St. Joseph Sr. Janet Mock, executive director of LCWR. “We welcome you warmly into the presidency.”

Allen will join Immaculate Heart of Mary Sr. Sharon Holland, who will be president this year, and St. Joseph Sr. Carol Zinn, who moves from president to past president.

Franciscan Sr. Florence Deacon was past president and is now finished with what is essentially a three-year term in office.

Allen is president of the Sisters of St. Joseph of Concordia, Kan. She holds a doctorate in spirituality and a master’s degree in administration and has been a staff member of Manna House of Prayer in Concordia since 1995.

Holland, who became president Friday, is a canon lawyer with degrees from Georgetown University and has served for 21 years in the Congregation for Institutes of Consecrated Life and Societies of Apostolic Life, where she was one of the highest-ranking women in the Vatican.

“Thank you for all you’ve already done for LCWR and all you will do in the future,” Mock told her.

Zinn, who moved from president to past president, holds a doctorate in curriculum development and education foundations and a master’s degree in theology. She was a research fellow at Episcopal Divinity School and Harvard University studying leadership and transformation.

Franciscan Sr. Mary Beth Gianoli was named LCWR secretary. The LCWR represents about 80 percent of the 51,600 women religious in the United States.

LCWR has been undergoing a Vatican-ordered doctrinal assessment since 2009. Following the investigation, in 2012, the Congregation for the Doctrine of the Faith ordered LCWR to reform its statutes and appointed Seattle Archbishop J. Peter Sartain to oversee changes. After this assembly, Sartain must approve speakers at the group’s events, according to the doctrinal congregation.

Sartain has attended each of the public sessions LCWR has held so far in its four-day assembly, but business for the group has gone on as usual, including high-profile keynote speakers talking bluntly from the podium while Sartain listened intently in the front row of tables and to the mundane, bureaucratic functions such as adopting a strategic plan. The doctrinal assessment has been discussed in closed sessions and been referred to several times by speakers, but it has not otherwise colored the assembly.

“The assembly always has business that has to be done,” said LCWR spokeswoman and Immaculate Heart of Mary Sr. Annmarie Sanders. “We provide education to members, give them an opportunity to network, give them a chance to look at pressing justice issues of the world and elect officers.”

While Sartain said he and LCWR have an agreement to speak only to each other about the doctrinal assessment, he did tell NCR he is always impressed by the warm, personal relationship he feels at each assembly he attends.

“I’m very pleased with the gracious welcome I’ve received,” Sartain said. “It really is a pleasure to get to know sisters individually and learn about each of their communities. And I’m always struck by how many I know personally from my years in the ministry -- it’s great to be able to see them again and check in with them and see how they’re doing.”

Friday morning, Sr. Nancy Schreck, a Franciscan sister and a past president of LCWR, wrapped up her multi-day keynote address by talking about leadership and the need to connect with others’ sorrow.

Others may not understand this, she said, echoing remarks she had made before, but it is still the right thing to do. She then won warm applause by quoting Friedrich Nietzsche: “Those who were seen dancing were thought to be insane by those who could not hear the music.”

As the assembly was drawing to a close Friday, sisters were feeling rooted and strong. Many of them said they felt more connected to each other and empowered by that connectedness.

“We listened to each other, we prayed, we reflected, we laughed,” said Sr. Kathleen Phelan, a Dominican from Sinsinawa, Wis. “We were deeply touched, but I think we’re determined as women religious in the United States to be together in moving forward.”

Moving forward was a hallmark of the addresses Zinn and Schreck gave earlier in the week, and it was a theme Schreck reiterated in her second address Friday morning, which resonated with LCWR members.

“Carol Zinn and Nancy Schreck,” said a Franciscan sister said, leaning forward, her voice becoming more staccato, “they did not waste a word.”

Zinn and Schreck seemed to be the unanimous favorites of the week.

Joan Mumaw*, an Immaculate Heart of Mary Sister from Monroe, Mich., said Zinn and Schreck’s addresses were among the highlights of the entire week for her, and they left her positive and hopeful.
“I think we’re standing together as religious women,” she said, “And I think it’s inspired.”

“I very much appreciated Nancy Schreck’s presentation,” said Carol Regan, a Holy Union sister and associate director of the Religious Formation Conference. “I thought it was a masterful, masterful overview of our reality today, and found it very encouraging.”

“I’ll certainly take back some of the challenges they gave us,” she said, “The call to be leaders -- to really look at that from a contemplative stance -- to be presence to those that are marginalized.”

*An earlier version of this story misspelled Mumaw's last name.

[Dan Stockman is national correspondent for Global Sisters Report, a project of National Catholic Reporter. His email address is dstockman@ncronline.org. Follow him on Twitter: @DanStockman. Dawn Cherie Araujo is a staff writer for Global Sisters Report. Her email address is daraujo@ncronline.org. Follow her on Twitter: @Dawn_Cherie.]