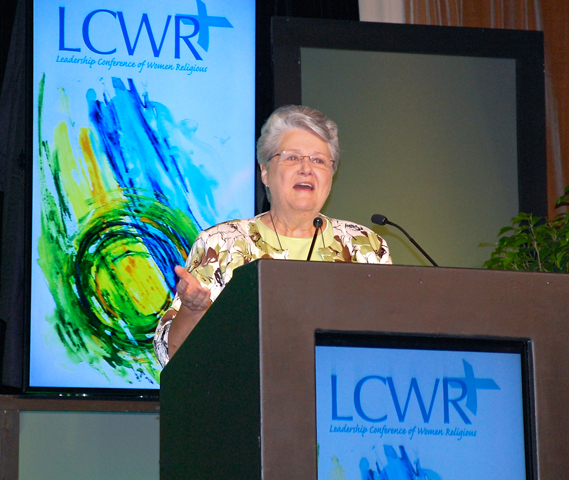 Franciscan Sr. Nancy Schreck, a past president of the Leadership Conference of Women Religious, speaks Thursday to members gathered in Nashville, Tenn., for the group's annual assembly. (Dan Stockman)

The identity of women religious has changed dramatically in the last 50 years, the nation's largest group of sisters heard Thursday, but that change has occurred because they implemented the directives of the Second Vatican Council, not because they have been unfaithful.

Sr. Nancy Schreck, a Franciscan sister and a past president of the Leadership Conference of Women Religious, told LCWR members gathered Thursday here for their annual assembly that Perfectae Caritatis, the Vatican II document on the adaptation and renewal of religious life, has been one of the most implemented of the council documents because women religious have followed its teachings.

But that renewal and change has led to the issues women religious now face, Schreck said. LCWR has been undergoing a Vatican-ordered doctrinal assessment since 2009. Following the investigation, in 2012, the Congregation for the Doctrine of the Faith ordered LCWR to reform its statutes and appointed Seattle Archbishop J. Peter Sartain to oversee changes. After this assembly, Sartain must approve speakers at the group's events, according to the Vatican.

"Many keepers of the great religious traditions can seem frightened by what we have come to know and find it difficult to converse with the complexities and hungers of our vision," Schreck told the nearly 800 sisters at the assembly. "The experience is like that of the biblical exile in which we have been so changed that we are no longer at home in the culture and church in which we find ourselves. This is not a bad thing -- it is simply how God works at times. What is important is that we use well the wisdom we have gained in being so created, especially in solidarity with others in exile."

Schreck's nearly hourlong talk at many points drew murmurs of assent from the crowd; at others, outright applause. (Read Schreck's keynote speech.)

"People who have not made this journey or perhaps done similar inner work would like to keep us where they have known us," she said. She drew murmurs again later when she paraphrased Hebrews 11: "Walking by faith is to seek a world other than the one from which we are swiftly being ejected."

The Vatican doctrinal assessment criticized LCWR for focusing too much on the poor and social justice issues and not enough on abortion and gay marriage. Schreck said women religious are following the directives of Perfectae Caritatis.

"The council asked us to become more aware of social concerns, and we did so with issues from racism to climate change, from trafficking to the nuclear threat, the concerns of the LGBT community to global economics, women's equality, violence, ethics in health care, issues of abortion and the death penalty, drones, peacemaking," she said. "[We have learned] that our truest historical role is responding to the unmet needs of our world and our church."

That response has led to a deepening of faith, she said.

"We have been in a process of maturing since the council's call to renewal, and I dare say that through the process we have become more faithful, not less, more clear about who we are, not less, and more free to give expression to our call, not less," Schreck said.

The theme of the group's four-day assembly is "Holy Mystery revealed in our midst," and Schreck has spoken repeatedly throughout the event about not being afraid to be lost in darkness because it is there that one can find both God and themselves.

On Thursday, she said that is contrary to what the world often demands.

"Interpreted from the outside, especially in U.S. culture and from the perspective of a royal theological position, if we were on the correct path, it all should look much more successful; that is success defined in terms of numbers, power and place," Schreck said. "Our natural tendency is to want to be understood and accepted, applauded and appreciated, but that is not our truest purpose and identity. It is not where we really belong and, indeed, we will sell our souls if we stay in the place of wanting to be part of the mainstream, thus becoming something other than we were intended to be."

The years of being in what she called a "middle space" have led to a maturity that cannot be ignored or denied, even if it is not understood by those outside.

While it is not yet known how the group will respond to the mandate that Sartain approve future speakers, many LCWR members say privately they don't know how the group can assent and maintain its integrity. Scheck -- with Sartain in the audience -- echoed those thoughts Thursday morning.

"The church and the world need our mature love," Schreck concluded. "The journey through the mysteries of our time has carved too deep a path into the soul or essence of our lifestyle and our congregations for us to pretend to be other than we are."

The group has met twice in executive session to discuss the doctrinal assessment and the mandates of the Congregation for the Doctrine of the Faith. They will meet again on the topic Friday. Later Thursday, they are scheduled to discuss two social justice resolutions: One will call for a turn to renewable energy as well as for an end to mountaintop removal coal mining and hydraulic fracturing (known as "fracking") for oil and gas; the other will call on Pope Francis to repudiate the 15th-century Doctrine of Discovery, which justified claiming dominion over indigenous peoples.

Members Thursday morning also voted on officers. Sr. Marcia Allen, president of the Sisters of St. Joseph of Concordia, was the only nominee for president-elect. The results of the election, which will also choose a secretary, will be announced Friday.