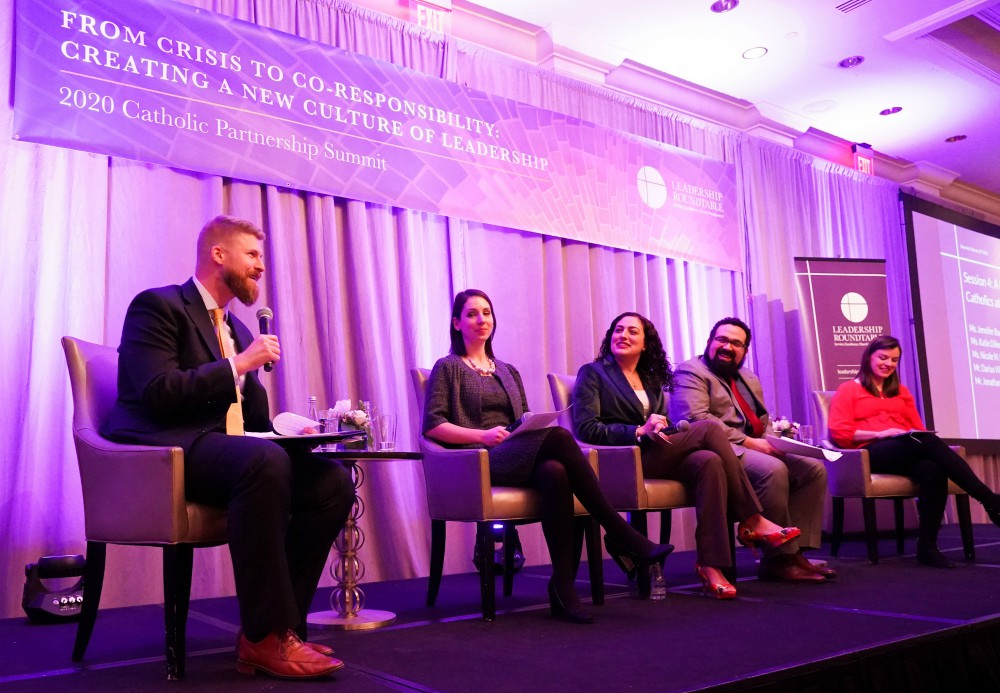 A new report by Leadership Roundtable recommends establishing national standards for financial management for dioceses across the United States, along with an annual, publicly shared audit of financial policies and practices. It also calls for the church to invest in more training and support for young adults interested in ministry.

The proposal is modeled after the "Dallas Charter," which was implemented by the U.S. bishops in 2002 and established national protocols for child protection and would be codified in the church's canon law. The Leadership Roundtable is an organization devoted to promoting best management practices in the church.

"We Are the Body of Christ: Creating a Culture of Co-Responsible Leadership" is the result of a two-day gathering hosted in February in Washington. The conference brought together more than 260 individuals from around the globe, with keynote remarks delivered by Archbishop Christophe Pierre, papal nuncio to the U.S.; St. Joseph Sr. Carol Zinn, executive director of the Leadership Conference of Women Religious; and Archbishop Wilton Gregory of Washington, among others.

"Healthy financial management requires the establishment of common financial and accounting protocols, compliance standards, audits, reporting, and training that could be enacted through a lay association of chairpersons of diocesan financial councils," the report states.

It also recommends that the U.S. bishops' conference utilize a third-party system for reporting financial mismanagement, along with the establishment of an independent, national lay review board to monitor compliance with the newly established directives.

The Leadership Roundtable recommendations come in the middle of both a national and global financial crisis in the United States where more than 20 dioceses have filed for bankruptcy protections in the past 16 years, due to clergy sexual abuse lawsuit settlements and now the global COVID-19 pandemic. A recent study found that nearly half of the dioceses across the country are considering closing or shuttering its programming, including schools, in the face of financial hardship.

In May, the Vatican announced Pope Francis had postponed the annual collection for "Peter's Pence," the pope's major charity appeal, due to the financial devastation caused by the coronavirus.

In addition to addressing financial concerns, the report builds on Francis' 2018 Synod of Bishops on young people to have greater decision-making power in the church and for young people to reflect the demographic diversity found throughout the church.

Among the recommendations is that equal financial resources be provided for the ministerial education of young lay ministers and clergy, including the establishment of a national scholarship fund or loan forgiveness program for young adults who want to work in ministry.

The report also recommends that young adults who work in parish ministries be paid a living wage with competitive benefits in order to better retain talent.

Katie Diller Gleason, the coordinator of campus ministry for the Diocese of Lansing, Michigan, and a speaker at the conference, told NCR that dioceses need to examine the way they approach young adult volunteers and full-time employees.

She said that young adults need to be invited into leadership roles that extend beyond service as extraordinary ministers of Communion, but should also be included on parish finance councils, parish councils and Catholic high school boards.

"We're not talking necessarily about a 19-year-old," she said. "We could be talking about a 25-year-old who has a degree in finance or economics and can come to the table with new ideas."

Diller Gleason said that while she realized the pandemic has put a strain on already limited resources, "youth and young adult ministers are often the first to go."

"Even though we in the church often say that young adults are our top priority, the budget is not only a moral document, but a mission and vision document," she said. "When we cut from our budgets the full-time youth minister with a master's degree and replace [that position] with a part-time youth minister who is a nice person in the community with no ministerial formation, that impacts our ministry to youth and young adults and our ability to form them well."

Kerry Robinson, global ambassador for the Leadership Roundtable, told NCR that the gathering served as a "clarion call to pay attention to the financial practices of the church and to step up and contribute to its financial health and transparency."

She said that the discussions covered a range of topics, including how to best manage the generosity of Catholics, how money is raised, how donor intent is respected, how dioceses and organizations can compete with one another for donations, the need for proper accounting of finances, and the need for proper investments.

Robinson said that there was a broad consensus that "the church deserves to be managed by the highest levels of accountability, ethics and transparency and deserves to benefit from the best managerial and financial practices."

The report also suggests the formation of a working group dedicated to church governance reform in an effort to promote greater co-responsibility in various structures, such as deaneries, leadership teams, pastoral and finance councils, and more.

The proposal is modeled after a recent report from the Australian Catholic Bishops Conference, which is preparing to host a nationwide plenary in 2021 to examine more lay leadership in the church.

"Co-responsible governance, in the view of Leadership Roundtable, describes a way of working where both lay and ordained Catholics make decisions together," Geno Fernandez, Leadership Roundtable board co-chair, said in a statement. "Decision-making is delegated to the most competent professional, respecting both the principle of subsidiarity and the hierarchical constitution of the Church."

He concluded, "This co-responsibility is elemental to resolving the looming financial crisis facing our Church and ensuring a vibrant future."