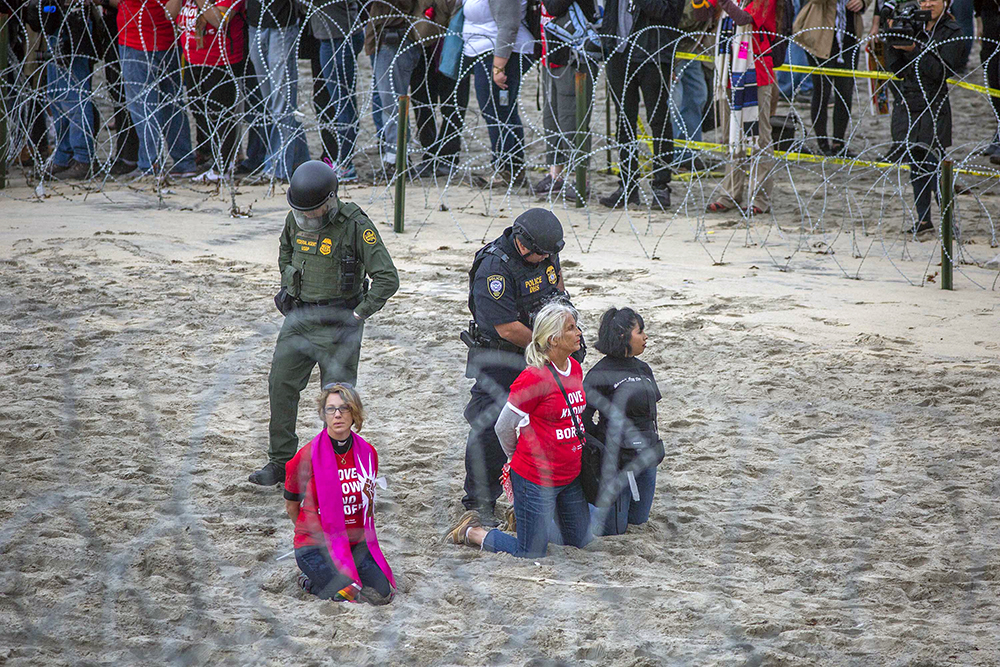 Border police arrest clergy and other protesters at a rally on the American side of the U.S.-Mexico border in Southern California on Dec. 10, 2018. (RNS/Jair Cabrera Torres)

After a tense standoff with officials at the U.S.-Mexico border on Monday (Dec. 10), at least 30 American clergy were taken into custody over the objections of demonstrators, who had come to protest the treatment of Central American asylum-seekers and to decry the extension of a border wall and the militarization of the border.

Priests, pastors, imams and rabbis knelt at the border south of San Diego in front of a row of U.S. Border Patrol agents clad in riot gear. Organizers said 30 faith leaders were arrested, but a U.S. Customs and Border Protection official put the number at 32.

CBP said most were charged with failing to comply with directions from federal officials and then released, but one was charged with assaulting or resisting an agent — a charge the protesters already dispute.

The "Love Knows No Borders" demonstration was organized by the American Friends Service Committee, a Quaker group that assembled religious leaders from across the faith spectrum for the event. Participants said it was meant to express frustration about several border-related issues at once.

"It was about the militarization of the border, about the border wall itself and about calling for the rights of the migrant — particularly the migrant caravan," said Lucy Duncan, an organizer and outreach director for the AFSC who was at the protest and was among those arrested.

"There were people there from all across the country from all faith traditions risking arrest and making a statement, saying this is not what our country stands for, this is not what our sacred traditions teach," said the Rev. Liz Theoharis, co-chair of the progressive, faith-rooted activist group the Poor People’s Campaign. Theoharis participated in the demonstration but was not detained.

Duncan said AFSC had the idea for the protest after learning that authorities planned to close Friendship Park, a well-guarded stretch of the border where friends and family members on both sides commonly gather to talk through the fence and where religious groups often hold joint worship services.

In addition to Theoharis and Duncan, participants included United Methodist Bishop Minerva Carcaño; the Rev. Susan Frederick-Gray, head of the Unitarian Universalist Association; the Rev. Traci Blackmon, a pastor in Ferguson, Mo., and head of the United Church of Christ’s Justice and Local Church Ministries; the Rev. Bruce Reyes-Chow, former moderator of the Presbyterian Church (USA); Omar Suleiman, an imam and adjunct professor at Southern Methodist University in Dallas; and Rabbi Brant Rosen, who serves on the rabbinical council of Jewish Voice for Peace. It could not be determined immediately whether they were among those arrested.

After an immigration-themed interfaith service on Sunday evening, the demonstrators gathered Monday about a mile from the border for a news conference before marching toward the protest site — a beach near Friendship Park.

The Rev. Julie Peeples, pastor of Congregational United Church of Christ in Greensboro, N.C., said the demonstration was split into two groups: roughly 100 who were willing to risk arrest, and roughly 200 who provided support behind them. 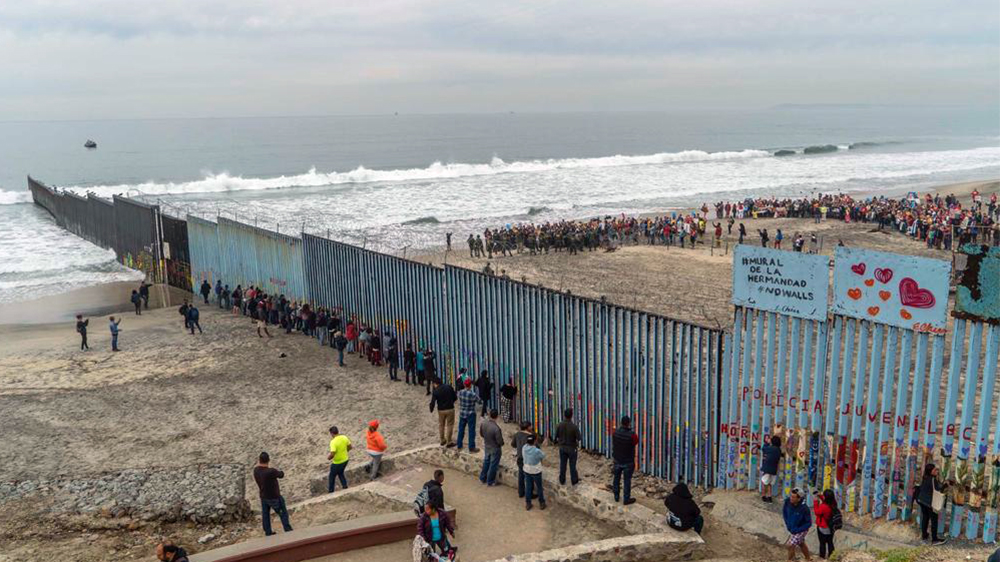 People protest against U.S. immigration policies on the American side, right, of the U.S.-Mexico border in Southern California on Dec. 10, 2018. (RNS/Jair Cabrera Torres)

Theoharis said the group stopped at one point to perform a ritual, where leaders "read the names of those who have died at the hands of Border Patrol or died trying to cross the border into the United States." They then anointed several demonstrators before those risking arrest moved in groups of four into a restricted area.

A line of border patrol agents was waiting for them. The clergy eventually stopped and began to sing hymns and protest anthems. As some knelt in the sand, they sang, "Rise up my people, my condors, my eagles! No human being will ever be illegal!"

Theoharis said they squared off with agents for nearly two hours, with officials sometimes shoving them back as they advanced while singing and praying. But organizers said that as the group turned to leave — partly due to the presence of what were described as "alt-right" counterprotesters — agents began conducting "waves of arrests."

Video of the incident shows Border Patrol agents pulling faith leaders through their ranks before throwing several to the ground and restraining their hands with zip ties. 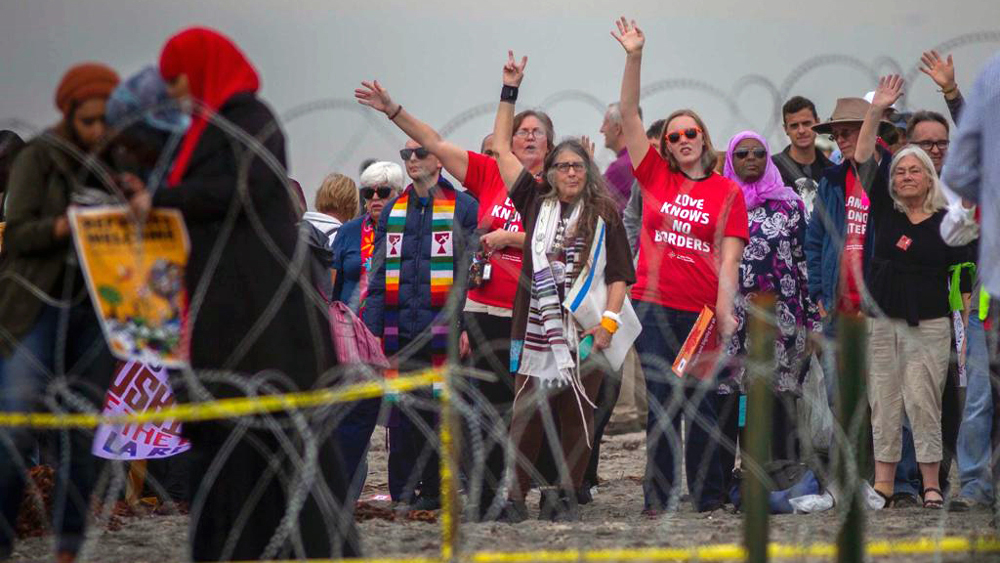 Clergy and others protest against U.S. immigration policies on the American side of the U.S.-Mexico border in Southern California on Dec. 10, 2018. (RNS/Jair Cabrera Torres)

Many of the clergy who assembled have been vocal in their support for immigrants in the past, and some are figures in the New Sanctuary Movement, which shelters undocumented migrants at risk of deportation in houses of worship in defiance of federal authorities.

"I follow Jesus Christ, who welcomed everyone," said Peeples, whose church has offered sanctuary to at least two undocumented people. "That’s very basic, but it’s the truth. God throughout Scripture had a huge heart and concern for migrants."

Duncan said she hopes their demonstration can capture the attention of lawmakers and that they respond with legislation.

"We want to defund ICE, defund Border Patrol, and defund hate," she said.