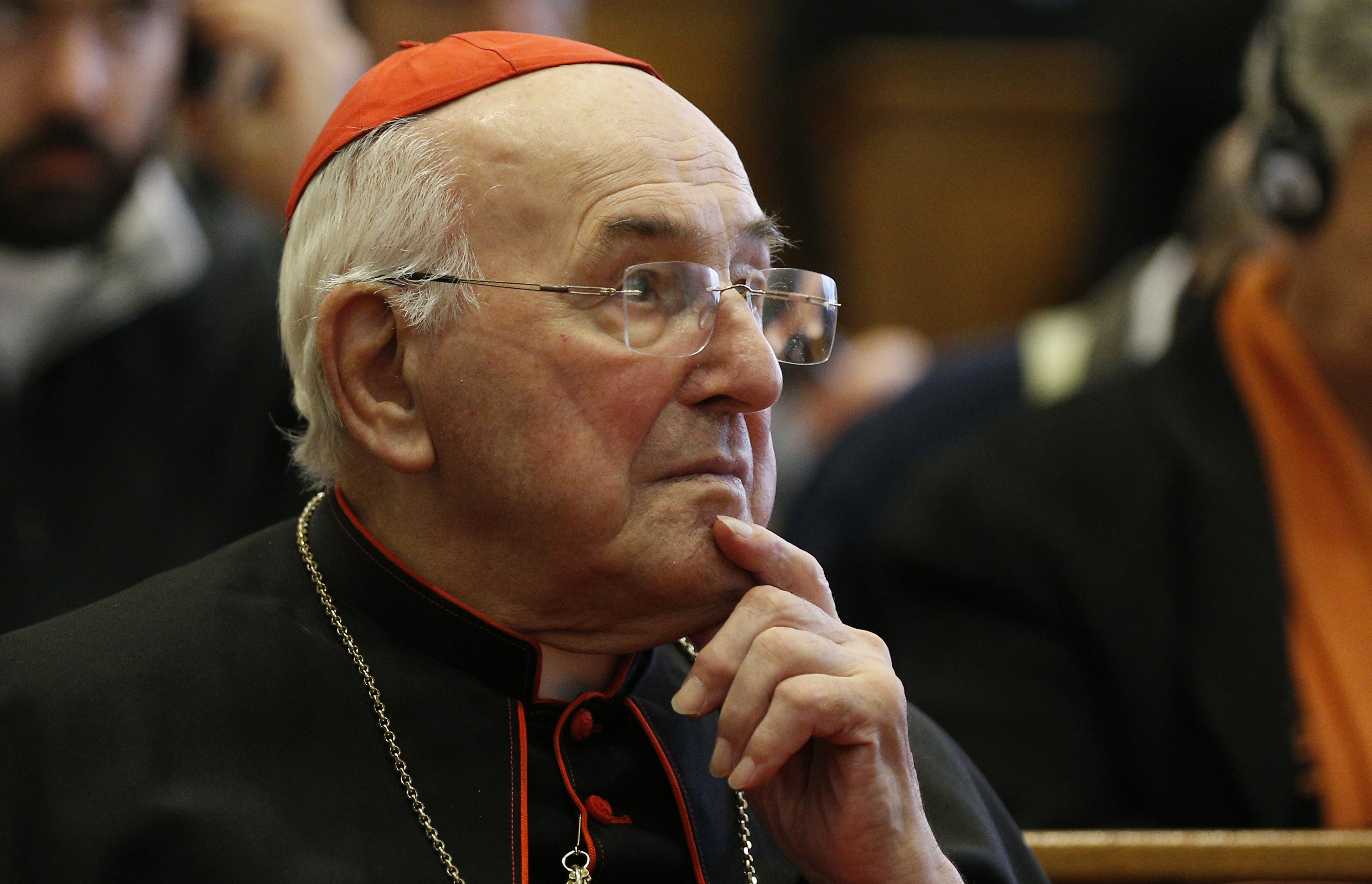 German Cardinal Walter Brandmuller, former president of the Pontifical Committee for Historical Sciences, is pictured in a 2017 photo. Retired Pope Benedict XVI expressed his displeasure with the way the cardinal publicly criticized his stepping down as pontiff, and he defended taking the title "pope emeritus." (CNS/Paul Haring)

Retired Pope Benedict XVI expressed his displeasure with the way a German cardinal publicly criticized his stepping down as pontiff, and defended taking the title "pope emeritus."

In two private letters from the retired pope to German Cardinal Walter Brandmuller, former president of the Pontifical Committee for Historical Sciences, the pope defended the way he handled his resignation and warned the cardinal of the negative impact his public comments could have.

The German newspaper, Bild, obtained copies of the letters written in November 2017, but blurred Brandmuller's name in photos. The New York Times named the cardinal and also published translated excerpts from the letters Sept. 20.

The first letter from the retired pope was a response to a comment Brandmuller made in a lengthy interview with the German newspaper Frankfurter Allgemeine Zeitung published Oct. 28, 2017.

The interviewer had asked what the cardinal thought about the "construction" of "pope emeritus" -- the title the retired pope has taken on. The cardinal responded that the figure of a "pope emeritus" had never existed in the church's history and having a pope "withdrawing now and overturning a 2,000-year tradition totally astounded not only us cardinals."

Referring to that portion of the newspaper interview, the pope wrote that Brandmuller should certainly be aware that other popes had -- though rarely -- stepped down.

Benedict wrote that by using the title "pope emeritus," he would be away from the media spotlight and make it thoroughly clear there was just one pope.

"If you know of a better way, and therefore think that you can judge the [title] chosen by me, please tell me," the retired pope wrote.

In the second letter, the pope acknowledged the cardinal responding to his first letter, and he said he was grateful that it seemed the cardinal would no longer discuss his resignation in public.

"I can very well understand the deep-seated pain that the end of my papacy has caused you and many others," Benedict wrote. "However, for some people and -– it seems to me -- also for you, the pain has turned into an anger that no longer merely concerns my resignation, but increasingly also my person and my papacy as a whole."

With such an attitude, he wrote, his whole papacy "is now being devalued and conflated with sadness about the situation in which the church currently finds itself."

Brandmuller had already postulated the idea that an "emeritus" pope figure could threaten church unity in his essay, "Renuntiatio papae: Some Historical Reflections," published online in July 2016.

Brandmuller was also one of four cardinals, including U.S. Cardinal Raymond Burke, who publicly released in September 2016 a critical set of questions, known as "dubia," asking Pope Francis for clarification about his teaching on the family.

Benedict, a noted theologian, had described his decision to be the first pope to resign in almost 600 years as the result of intense prayer and an examination of his conscience before God.

In the last two days of his pontificate, he pledged obedience to his successor and noted that he was leaving the "active exercise of the [Petrine] ministry." While promising to remain "hidden" in retirement, he also said he was "not returning to private life" but would belong "always and totally to everyone, to the whole church" and "remain, so to speak, within St. Peter's precincts."