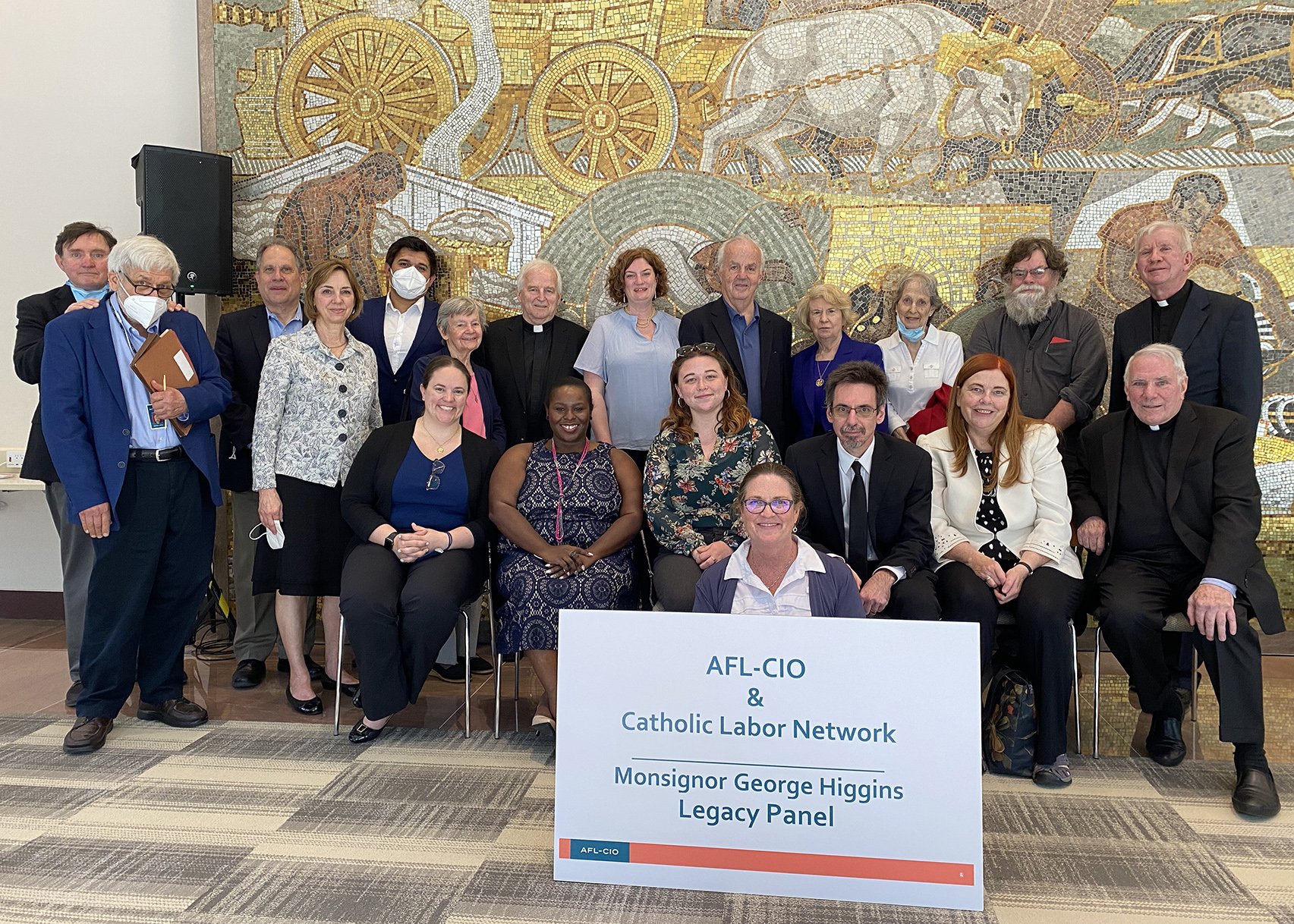 Panelists are seen during the May 2, virtual discussion about the legacy of Msgr. George Higgins and the relationship between the labor movement and the Catholic Church, then and now. (CNS/Courtesy of Catholic Labor Network)

Labor advocates were urged to follow the legacy of Msgr. George Higgins, the foremost "labor priest" of the 20th century, during a May 2 forum celebrating the Chicago priest's efforts on behalf of workers.

"If you look around today, you can see the true measure of the impact Msgr. Higgins made on the labor movement," said Liz Shuler, AFL-CIO president. "He truly was labor's priest. He dedicated his life to bringing the labor movement and the faith community together, wherever working people are lifting their voices from the grape fields of California in the Modesto valley to the coal fields of Harlan County, Kentucky."

Higgins died in 2002 on May 1, the feast of St. Joseph the Worker, at age 86. In addition to his advocacy for workers, unions and the labor movement, he drafted the U.S. bishops' annual Labor Day message for decades and wrote a weekly column, "The Yardstick," which was syndicated by Catholic News Service for 56 years, from 1945 to 2001. He also worked with the AFL-CIO to keep the labor federation neutral on the abortion issue. 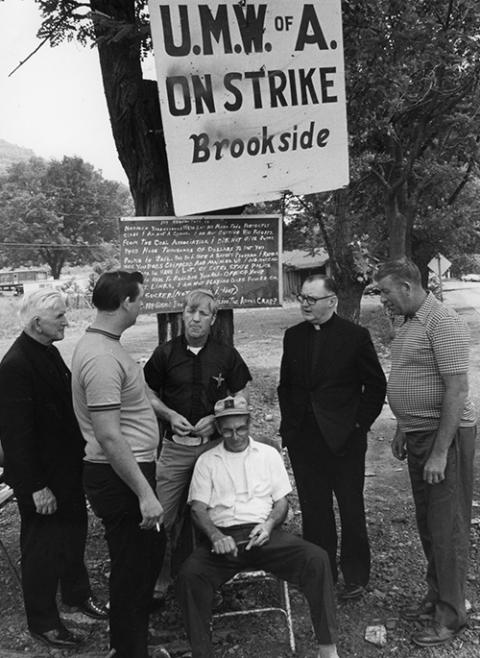 Shuler listed Higgins as one among many Catholic labor figures who mentored and inspired her, including her predecessor as AFL-CIO president, Richard Trumka; John Sweeney, who preceded Trumka, and who "continues to be a person who impacts me, in particular his faith"; and her "spiritual advisers," Fr. Clete Kiley, director of immigration policy for the UNITE HERE union, and Joseph McCartin, director of Georgetown University's Kalmanovitz Initiative for Labor and the Working Poor.

"The Holy Spirit is at our back," Shuler declared, adding that "it takes a committee to make a mighty change. ... That's what the Apostles did, too."

Kiley said as a Chicago archdiocesan seminarian, Msgr. Higgins had to have been influenced by his rector at Mundelein Seminary, where, "I can tell you, every brick, every wire, every toilet, was made union." Further, rather than the typical practice of the day in keeping worldly influences from seminarians, the rector encouraged students to "get their hands on a newspaper" to stay engaged with the larger world.

After Higgins' death, Kiley said someone lamented to him, "With Msgr. Higgins gone, the labor priests are dead." But that's been proven wrong, he added.

"It's clear that the mantle of Elijah has been passed on to a new generation — not just priests, but Catholic labor organizations and lay ecclesial ministers. And I believe Msgr. Higgins would absolutely be delighted to see this," Kiley said.

"The dignity of work and the centrality of participation to justice," said Meghan Clark, an associate professor of moral theology at St. John's University in New York City. Too often, that is often confined to salaries and benefits, and not its "correlation to the common good," she added.

"Work is not how we earn our daily bread. It is what makes us co-creators with God," Clark asserted. "There is always a priority for labor over capital," as demonstrated, she said by the adage: "We are made for work, not work is made for us.

"It is through work that we inhabit and develop our dignity," Clark said, adding there is "just not enough of it" in our present age. "That is evident in Msgr. Higgins' ministry to see the world as it truly is, but think of what it can be." 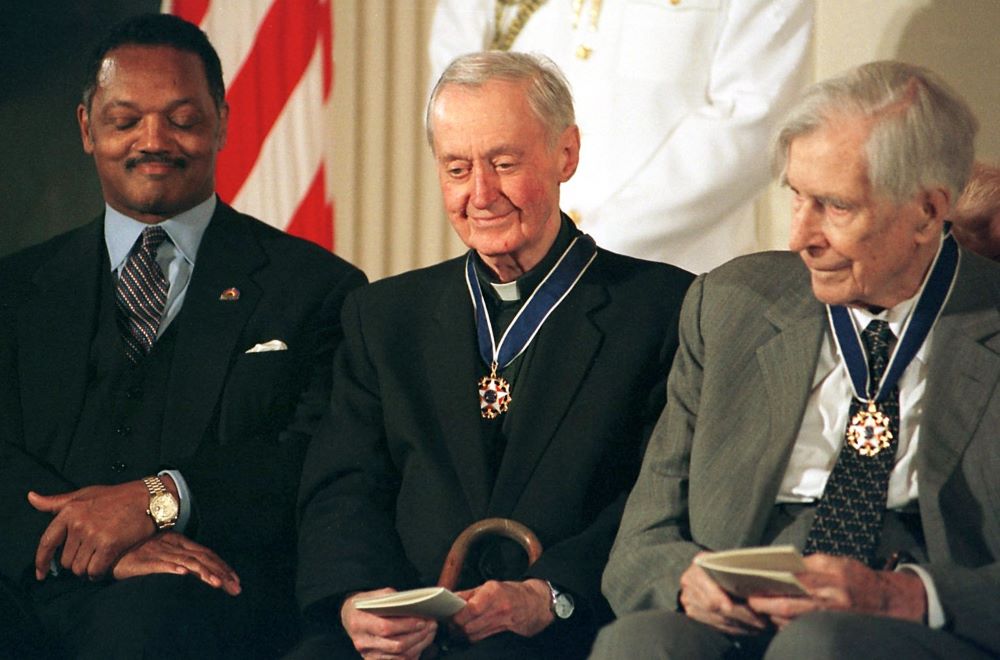 "I came to the church when the church came to workers and stood up with them," said Chuck Hendricks, a labor organizer for 24 years and a Catholic for 12.

He recalled trying to organize painters at Loyola University Maryland. "It was terrifying to get a $5,000 bill in the mail" for his daughter's medical care, he said. The painters were "subjected to a horrible anti-union campaign, and I was fired on that campus," he said, adding that the experience made him "more determined to organize."

Hendricks was hired by UNITE HERE to organize casino workers in Palm Springs, California. He said he got his first taste of how the church could act for good when a pastor in Palm Springs "committed civil disobedience when the company cut off their health insurance."

A turning point for Hendricks was an organizing subcontract food service workers at DePaul University in Chicago. "They were fighting for the right to have a union, affordable health care and a living wage, he said, adding he was amazed by the priests and students who backed the drive.

But he saved his highest regard for the student who headed DePaul's right-to-life club on campus. According to Hendricks, she told university leaders: "The right to health care is the right to life." "When she confronted them about that issue, you really got to see the university start to turn," he said.

"It opened the door to my conversion to Catholicism. It forces us to choose between a church that is safe ... and one that is challenging for those with a lot of privilege."

Fr. Evelio Menjivar, pastor of St. Mary Parish in the Washington suburb of Landover Hills, Maryland, was in the first group of 28 new labor priests trained to rebut the "labor priests are dead" remark.

"This is part of bringing glad tidings to the poor and liberty to captives," Menjivar said of his new ministry. "So many times, the blind are us — not those outside but us — most especially priests and bishops," he added.

"I know somebody close to our family who was not paid," Menjivar said. The person was an immigrant whose boss refused to pay his wages. "There are people who were exploited right to our faces."

Menjivar said: "The word 'solidarity' is a little-known word and poorly understood, but it is more than a few general acts of charity. In terms of the community and the priority for all over the life of all appropriation of goods by the many."

He added: "The church is all the baptized. We are the salt of the world. But many times we aren't doing our job."

"Is it bad to support unions?" he asked. "No, it is not. Actually, it is good that you're doing that. It's a great contribution we pastors can offer the people: 'This is part of the social Catholic teaching.' " But he further asked: "What is the problem with people in passing immigration reform? It is the same thing, that Catholics are not supporting immigration.

"We teach the whole faith, not only some issues."

"We're a bit fractured. We don't have the alignment," Kiley said. What's more, he noted, is that "our bishops are probably as divided" as lay Catholics, if one recent poll is to be believed. "We have to do everything we can in our given callings in life to strengthen that alignment."