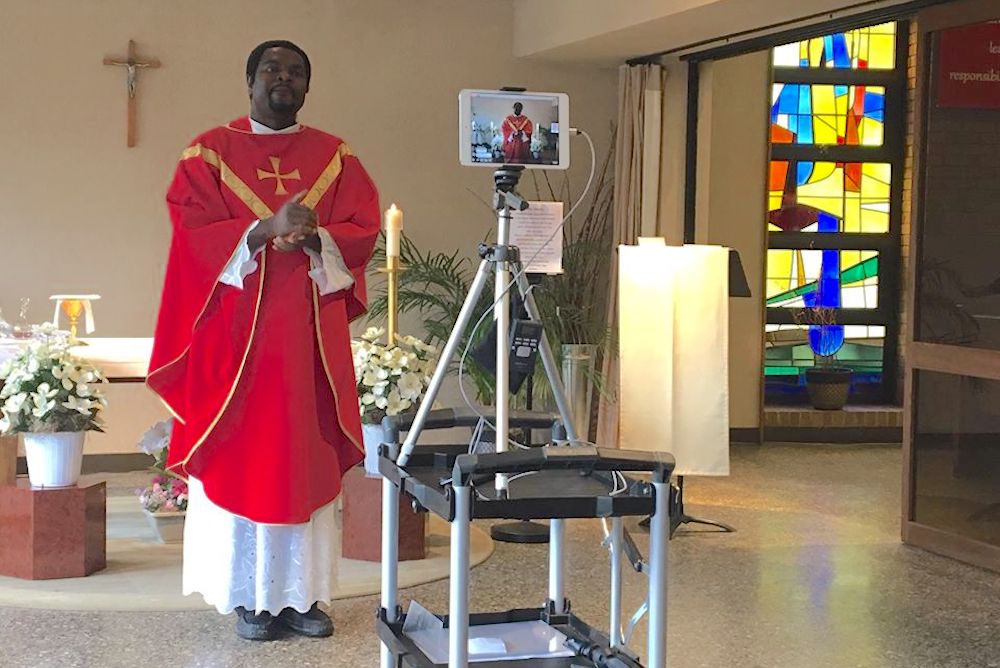 "By the rivers of Babylon we sat and wept when we remembered Zion," the psalmist wrote.

The scriptural message is clear that exile creates longing. But, noted Sommer, return poses its own issues.

"It's never what it was. It's not the old normal," Sommer told NCR as the parish begins a transition to what a new post-pandemic future will bring.

St. Bernard's staff members say that the parish lost about two dozen parishioners to the virus, although the numbers were hard to count. Sometimes the parish staff were notified about deaths, other times not. Especially early in the pandemic, as local funeral homes were overwhelmed, parish staff were notified only when Catholic families told the parish. One funeral home used what became an ominous symbol for New Yorkers during the pandemic: a rented refrigerated truck in the parking lot to house the dead. Traditional Catholic funerals were impossible due to distancing regulations, said Sommer.

There are questions to be answered at St. Bernard's, located on Hempstead Turnpike, the packed thoroughfare cutting through the middle of Long Island suburbia: Will they return? And, when they do, what will they return to? It is a question also being asked by pastors and parish ministers of 17,000 other parishes across the United States.

As of Father's Day, June 21, St. Bernard's, a part of the Diocese of Rockville Centre, opened for Mass at a quarter capacity in the parish gymnasium, with rules including mandated masks for all worshipers, ending a long eucharistic fast and the end to a spring that shadowed 5,000 parish families with pandemic isolation, the specter of hardship and, in some cases, illness and death.

St. Bernard parishioners are counted among the hundreds of thousands who contracted the virus but have survived.

They include Joseph and Jennifer Rojas, parents of 7-month-old Brandon, in regular touch with the parish as they made arrangements to baptize their son. But then Joseph began what he first felt as seasonal allergies toward the end of March.

His fever went up to 103 degrees Fahrenheit, usually around the dinner hour. He self isolated in the bedroom, and his wife and infant son took up the living room. Rojas, who works in law enforcement, went to the hospital, but was sent home, as his oxygen levels were normal. Still he lost 20 pounds.

Jennifer continued her work at home on social media interviews, working with troubled children. She clutched a set of rosary beads, adorned with pink flowers, every night.

"Lord Jesus, we need your healing hand in this house," she prayed. Deacon John Blakeney called from the parish, offering his spiritual support and prayers.

Blakeney's calls were integral to parish ministry during the pandemic. Social distancing meant little direct contact with parishioners, but hundreds of calls were made to parish households. Most were surprised to hear from the parish but welcomed the human contact in the midst of hunkering down. 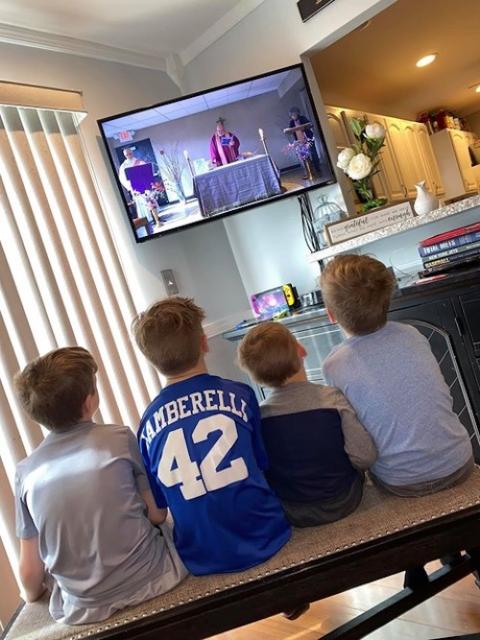 Sommer, 37 years a priest, seven years at St. Bernard's, is known in diocesan circles for innovative techniques to connect with parishioners.

As churches closed in mid-March, the parish stepped up with alternatives. Mass  by video was offered on Facebook. Pictures of parishioners filled the pews, to be recognized by churchgoers at home. The priests in the parish participated in gravesite funerals, adhering to small group gatherings allowed by health regulations.

Sommer organized a drive that went past parishioner houses with a monstrance, offering a blessing. The goal was to be with his people during their suffering.

According to the Catholic Extension Society, the Diocese of Rockville Centre has the second highest infection rate in the country. Levitttown is ranked among the top seven for number of coronavirus cases in Nassau County communities.

Why Levittown was hit hard is another mystery of the pandemic. One theory is that Levittown has a large number of coronavirus cases because of the police officers, firefighters and nurses who live there. The plus side was that they had work, unlike others who lost jobs during the pandemic, but the concern was that their work put them on the frontlines. "Going to work is a life-threatening situation," Sommer said about the public service and health workers from the community.

Amityville Dominican Sr. Christine Sammons, for 17 years coordinator of parish social ministry at St. Bernard's, helped those left without employment during the pandemic.

She noticed her clientele changed. And her approach did as well.

"We try to relate to people on a one-to-one basis," she told NCR. But that was impossible during the pandemic, for safety reasons. Patrons would receive a bag filled with groceries, with no opportunity to engage, to inquire about how they're doing.

More non-regulars dropped by. Sammons attributed that to the wider impact of the pandemic, and that many of her regular clients had moved on to bigger food banks that became more active as the pandemic spread. 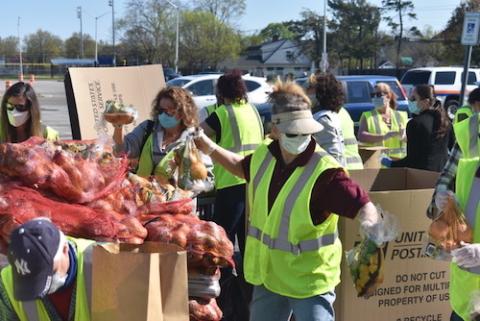 Parishioners have been generous, Sammons said. Some parish volunteers assisted with food distribution at a local public school that attracted more than 600 households.

One father and husband died from the virus, leaving a wife with a child. Parish social ministries arranged to pay a month's mortgage and a car payment for the family.

McDonough noted that Levittown is the kind of community where the founders' families still abound (about a fifth are seniors). Many younger families have long roots to the town, buying houses near where they grew up or inheriting the original family homes. Young Levittown families often find themselves concerned about the safety of their children and their parents at the same time during the pandemic.

That provides a teachable moment.

"That's education right there," McDonough said, adding that the role of faith comes to the forefront in times of crisis, in some ways easier to discuss than when life is more routine.

Meanwhile, the parish tried to respond to the need for spiritual support. St. Bernard's featured regular Scripture and prayer sharing discussions conducted via social media.
That supplemented social media Mass, where about 600 households attended on Sundays, with another 200 regular participants during the week.

Religious education classes were largely on hiatus, although lesson plans were posted on the parish website for interested parents. "We don't want to put pressure on our religious education families right now," said Susan Martin, director of faith formation for the parish for elementary school students. 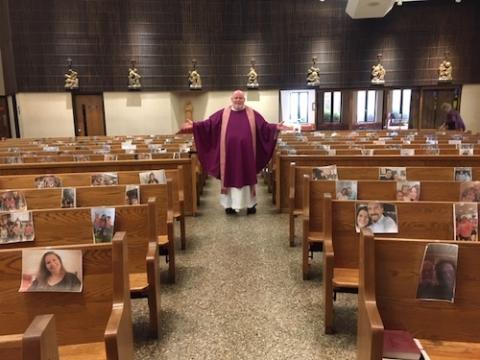 Religious education will return in the fall, via online platforms. It is a new challenge, much as it is with public school educators. There is little sense of how that might go. Martin is hoping that students will be more likely to attend Mass at that time, whatever form that may take, whether virtual or in-person.

The Rojas couple says they are looking to return. They want their son to be baptized in front of their church community. And they offer thanksgiving to God for having survived.

Joseph Rojas said as he got sicker, he learned that an aunt had died from the virus. He was stuck in his room, unable to be much support for his family. "This was all on my wife's shoulders. All she had was Jesus," Joseph Rojas told NCR. Quietly, without telling her husband, his wife was also not feeling well, and she prayed that they could all get through illness, particularly for the future of their son. She got chills and a fever one night, and prayed. The next morning, her symptoms were gone. The family is now fully recovered, she said.

"COVID is out of our house. It is a fallen enemy," said Jennifer Rojas, crediting Jesus for her family's survival. "I am just filled with gratitude that my son gets to play with his father every day."

What kind of congregation will join them at St. Bernard's?

Most likely a limited one. Worship is only opened gradually, as Long Island is now in phase two of a process that allows for curbside retail and outdoor dining but not large church gatherings.

Blakeney sees enthusiasm for a return.

"I'm thinking of the parishioners I see each week. I can't imagine they are not coming back. We miss gathering, everyone just getting together," he said.

A routine event like baptisms, done as community events, may have to be changed to offer families individual ceremonies, as concern about the virus is sure to continue. Some families, hunkered down together for months, have a renewed vision of what is referred to as the domestic church, the role of faith in family life. Some people, acknowledge the parish ministers, may have been bereft of much formal faith influence during the pandemic.

Others adjusted to a social media parish experience.

"I think people have developed a habit of [social media] Mass. They love it," said McDonough, noting that many parish families have enjoyed the informality of the home Mass experience, Sunday morning without rushing children out the door, gathering around the computer screen.

There will continue to be health concerns, especially for older parishioners. Sommer worries they may be too willing to return to Mass despite their vulnerabilities.

Whatever happens in the return, the exiles of St. Bernard Parish have already learned hard faith lessons this pandemic, said McDonough. She is looking at a definition of Eucharist that transcends church attendance. There are lessons to be learned, she said, from the example of the service workers who ventured forth despite dangers, the families who coped with crowded houses filled with children, and those who experienced death and sickness. They have learned to rely on their faith.

Protective health equipment and scrubs, she said, are "now the vestments of mercy and the chasuble of celebration. That's the holy ground."

"I see the body of Christ on the gurney and the stretchers. Let's look for the Eucharist in other places if we can't have it in our hands on Sundays," she said.

The biblical message of exile is complicated, said Sommer. Some will find a another place they like, either another form of spiritual sustenance or a weekend activity that provides distraction. Some will surely not return. Like the Hebrews returned from exile in Babylon, others may return to a place that has been transformed. 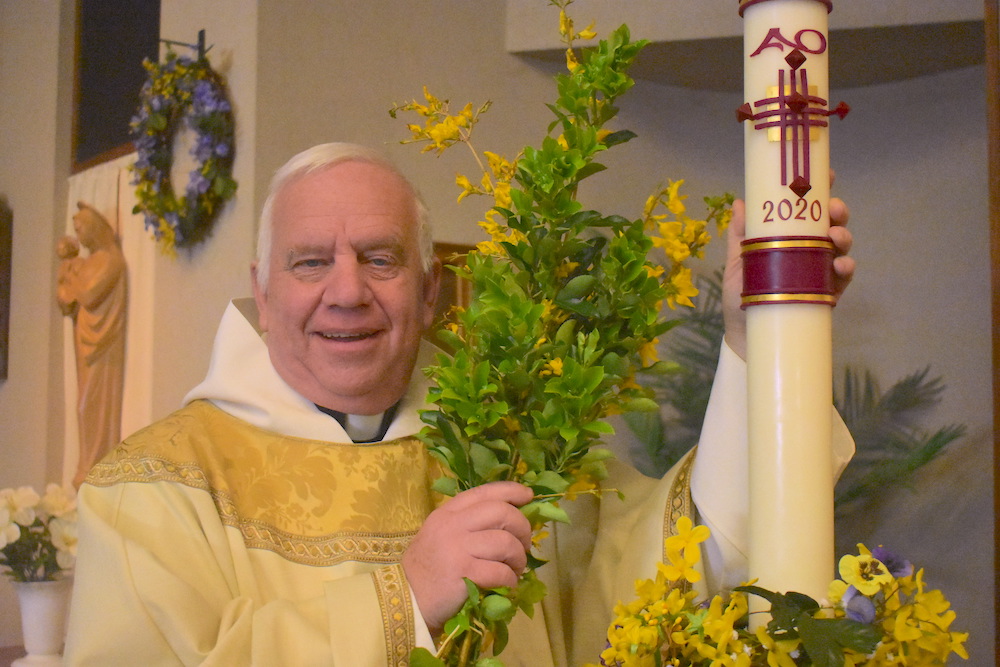