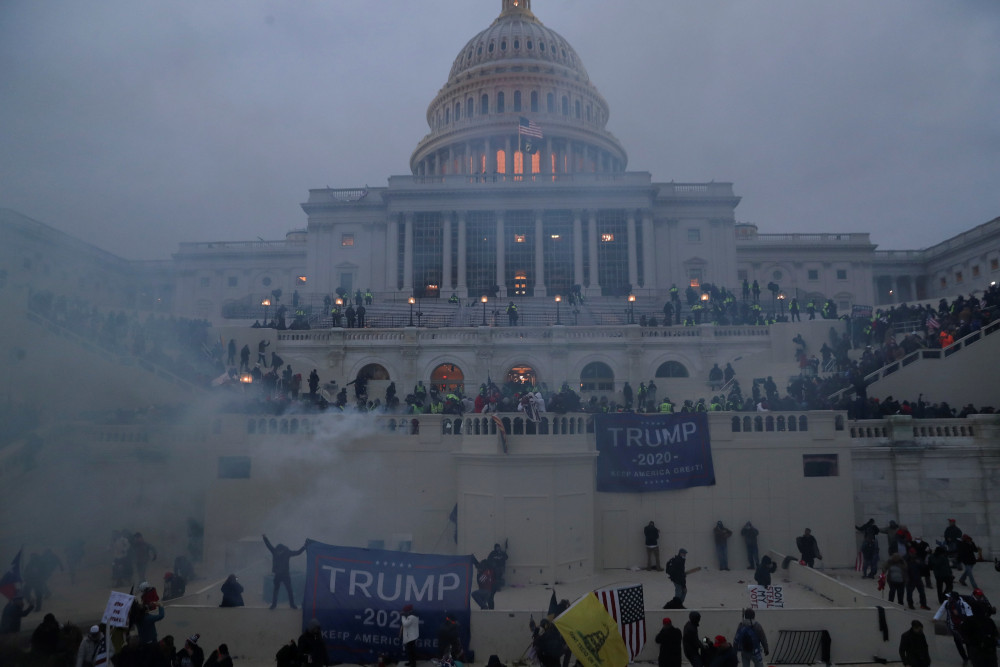 A group of prominent Christian leaders, including the heads of major denominations, say they submitted a letter earlier this year to the House select committee investigating the Jan. 6 attack on the U.S. Capitol, urging members to examine Christian nationalism and arguing the ideology played a crucial role in the insurrection.

Organizers of the letter, which has not previously been disclosed, told Religion News Service they were approached by a committee investigator on the topic. The resulting statement, dated June 2, was facilitated by Christians Against Christian Nationalism, an effort orchestrated by the Baptist Joint Committee for Religious Liberty.

Representatives for the House committee did not immediately respond to requests to confirm the faith leaders’ account of why the letter was drafted, or to clarify whether the committee pursued their request and investigated Christian nationalism specifically.

The letter notes the Christians Against Christian Nationalism campaign began at least 18 months before the insurrection took place. That is why, signatories argued, they “recognized the presence of Christian nationalism at the Capitol on that fateful day.” The letter also referenced a report published in February by the BJC and the Freedom From Religion Foundation detailing the role Christian nationalism played in the attack.

Activists and scholars who have been outspoken about Christian nationalism also signed on, such as Shane Claiborne, head of Red Letter Christians; Rev. Jennifer Butler, founder of Faith in Public Life; scholar and author Jemar Tisby; Mary J. Novak, head of the Network Lobby for Catholic Social Justice; Anthea Butler, chair of the department of religious studies at the University of Pennsylvania; and Jim Wallis, founder of Sojourners and director of the Center on Faith and Justice at Georgetown University.

The letter speaks to increasingly vocal criticism of Christian nationalism among faith leaders, often led by mainline Christian and Black Protestant voices. The Christians Against Christian Nationalism statement alone has accrued more than 30,000 signatures. Institutions such as Georgetown have hosted events condemning the ideology, and a recent effort spearheaded by activist group Faithful America decried various public figures and activists who espouse iterations of Christian nationalism as “false prophets.”

Religious leaders have also protested near stops along the ReAwaken America tour, a traveling event known for controversial right-wing speakers who fuse conspiracy theories with fervent Christian nationalism. A group organized by Faithful America and Word and Way is planning to stage another such protest when the tour arrives in Missouri this weekend.

Many evangelical leaders condemned Christian nationalism in the wake of the insurrection, as did Jewish, Muslim and other non-Christian leaders as well as secular groups.

Both previously had signed on to the BJC’s 2019 letter calling on Christians to push back against fusions of religion and government that the letter says are distortions of their faith.

“We reject this damaging political ideology and invite our Christian brothers and sisters to join us in opposing this threat to our faith and to our nation,” the 2019 letter read.

The ELCA’s Churchwide Assembly also had passed a resolution at its 2019 denominational meeting naming violent rhetoric in the name of Christian nationalism as “not a true Christian faith.”

“It is idolatry and we condemn it,” the resolution read.

The ELCA, the largest Lutheran denomination in the U.S., reiterated that declaration in a tweet posted Wednesday (Nov. 2) alongside an image reading, “I’m a Christian against Christian Nationalism.”

“Christian Nationalism is a threat to the gospel and to American democracy,” the tweet said.

At least one member of the House select committee, Maryland Rep. Jamie Raskin, was briefed about Christian nationalism earlier this year by Tyler and others, and the lawmaker was originally slated to speak at an Interfaith Alliance event last month on Capitol Hill focused on the topic. Raskin also publicly acknowledged the role “white Christian nationalism” played in the insurrection during multiple public appearances this year, and fellow committee member Rep. Adam Kinzinger of Illinois has similarly condemned Christian nationalism by name. Kinzinger told Christianity Today the ideology “100%” contributed to the Capitol attack.

“Had there not been some of these errant prophecies, this idea that God has ordained it to be Trump, I’m not sure January 6 would have happened like it did,” Kinzinger said.

Andrew L. Seidel, one of the authors of the joint BJC-FFRF report chronicling Christian nationalism’s role in the insurrection, said earlier this year he planned to send his testimony to the committee.

But the ideology was not directly mentioned during the Jan. 6 hearings themselves. Instead, lawmakers often focused on the faith of those impacted by the Jan. 6 attack, such as prayers said that day by then-Vice President Mike Pence.

There was at least one indirect reference to Christian nationalism during the hearings, however. In July, District of Columbia police officer Daniel Hodges, who was among those who rushed to the U.S. Capitol on Jan. 6 to defend it from insurrectionists, noted during his testimony the presence of Christian symbols — including ones that fused faith with the U.S. flag or images of weaponry — among the crowd. Members of that same crowd would later attempt to crush Hodges in a doorway as he screamed in agony, a harrowing moment documented in now infamous footage from that day.

“It was clear the terrorists perceived themselves to be Christians,” Hodges said.