The man at the center of the storms 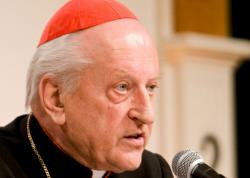 ROME -- This year marks the 20th anniversary of the fall of communism, a process in which Catholics often played a critical role. All across Central and Eastern Europe, stubborn pockets of the faithful, many essentially untouched by the reforming spirit of the 1960s, helped keep resistance alive. In so doing, they not only changed history, but they also helped shape the personality of the man currently at the center of two ecclesiastical storms.

Slovenian Cardinal Franc Rodé, 75, heads the Vatican’s Congregation for Institutes of Consecrated Life and Societies of Apostolic Life. That gives him jurisdiction over religious orders, and makes him the man behind two high-profile, and highly controversial, Vatican investigations: one of American women religious, the other of the Legionaries of Christ.

Both are currently underway, and it will be up to Rodé’s office -- if not necessarily to Rodé himself, since he’s already reached the usual retirement age -- to decide what recommendations go before the pope.

A Vincentian, Rodé comes across in person as charming, capable of putting people at ease in at least five languages. Yet to call him a controversial figure among many leaders in religious life, both men and women, is almost certainly an understatement.

Since coming to his job in 2004, he’s become famous primarily for flinging down gauntlets. Well-known examples include a homily he delivered for the Jesuits in January 2008, bluntly demanding obedience to the hierarchy, and a lecture at Stonehill College in North Easton, Mass., in September 2008, raising the “necessary and brutal question” of whether important sectors of religious life have broken communion with the church, even if they’ve physically stayed in place. Rodé also recently raised eyebrows by asking the U.S. bishops to cough up $1.1 million to fund the investigation of American nuns (see story).

Yet for a man who once spent three years in an Austrian refugee camp after fleeing a hostile communist regime, the pique he elicits now probably seems tame by comparison.

“You have to see the problems directly, look the situation in the face,” Rodé said during an Oct. 3 interview with NCR in his Vatican office, linking his pull-no-punches style to his experience under the communists. “It’s useless to try to hide it, or to pretend that there’s no problem. It’s not only useless, it’s dangerous.”

Not extensions of Rodé

Rodé agreed to the interview on the condition that there be no questions directly about either the investigation of American nuns or of the Legionaries of Christ. He did not want to prejudge the results of either process, he said, or to usurp the roles of the people in charge. He was willing, however, to talk about his personal background, and his views on the general state of religious life.

It would be a mistake to regard either investigation as an extension of Rodé’s personal interests.

In the case of women’s religious orders in the United States, sources told NCR that Rodé would not have initiated such an investigation on his own. Rather, they say, he was responding to requests from younger members of religious orders (expressed in part during the Apostolic Religious Life Symposium at Stonehill College where Rodé spoke), as well as pressure from American cardinals in Rome who felt that such a review was long overdue.

As for the Legionaries, an order founded in the 20th century and with a reputation for being conservative, Rodé is seen as a friend. Privately, he’s told people that he admires the “human qualities” of the Legionaries he’s met, as well as members of Regnum Christi, an affiliated lay movement. Given that sympathy, it’s widely regarded as improbable that Rodé is the driving force behind the apostolic visitation. The review was ordered in March by Pope Benedict XVI, after revelations that the founder of the Legionaries, Mexican Fr. Marcial Maciel Degollado, who died in January 2008, had carried on a long-term affair and fathered a child.

It’s entirely possible that neither investigation will be complete before Rodé steps down. A Vatican official told NCR that Rodé recently said he expects to be out of office by the time the review of women religious in America is finished, and hence someone else will have to deal with it.

That said, there’s little doubt that Rodé’s personal experience has influenced the way he’s tackled his Vatican post, including the two investigations.

Slovenia was among the most scarred corners of Europe during the Second World War. As the war wound down elsewhere, communist partisans loyal to Yugoslav strongman Josip Broz Tito hunted down the anticommunist “Slovene Home Guards,” regarded by the partisans, and by some Allied leaders, as pro-Nazi collaborators, but who professed allegiance to the Catholic church and to an independent Slovene state.

Many Catholics hoped the British would occupy Slovenia as an interim step toward independence. Instead, the British handed over roughly 12,000 imprisoned Home Guards to Tito. The disarmed troops were put on trains, taken home, and promptly shot to death. The mass graves have only recently been unearthed.

“We were on the losing side, and we were vanquished,” Rodé said. “We were like the South in the United States after the Civil War.”

After 60 years, the wounds are obviously still fresh.

“We put all of our hopes, all of our political and military faith, in the Anglo-Americans. In the end, they betrayed us,” Rodé said. Laughing, he added: “Anybody who reads just 40 pages of English history should realize that you can’t trust the English!”

With the handwriting on the wall, Rodé’s family followed tens of thousands of other Slovenes into exile. After spending three years in an Austrian refugee center (which Rodé described as a “concentration camp”), they eventually made it to Argentina. Just 13 at the time, Rodé said he never really fit in with the swelling Slovenian émigré community, whose ferocious anticommunism sometimes induced, he said, a one-sided view of the past.

“I wasn’t attracted to the somewhat closed, reactionary view of many anticommunist immigrants,” he said. “There were also errors on our side. The others, some of them to this day, insist that we were entirely right and the others completely wrong.”

Rodé eventually joined the Congregation of the Mission (usually known as the Vincentians), a community he had first known in Slovenia and then rediscovered in Argentina. He said the order’s simplicity and humility is still part of his spirituality, even if he doesn’t trumpet his affiliation.

“I don’t run around proclaiming the glories of being a Vincentian, but neither do I have an inferiority complex about it,” he said. “You know, if you listen to a Salesian, they hardly say anything without talking about Don Bosco! I don’t do that with St. Vincent.”

Rodé took perpetual vows in 1957, then headed off for studies at the Gregorian University in Rome and the Institut Catholique in Paris. Especially in Paris, Rodé was exposed to the new ideas swirling in Catholicism in the period before the Second Vatican Council (1962-65) and then during the council itself.

Unlike some freshly minted priests, however, Rodé seemed nonplussed by the experience. In his Stonehill lecture, he described testing the council’s reforming spirit in a series of pastoral assignments in the 1970s in Slovenia, where believers were struggling to survive.

“I soon realized that what I brought with me from my studies in Paris was of very little use,” he said. “I needed to be close to the people and to respect the traditional ways of expressing their faith.”

Looking back, Rodé believes that Vatican II, while designed to generate a moderate reform, instead triggered “the greatest crisis in church history.”

“In the 16th century, during the Reformation, many religious left the church and many convents were closed, but it was geographically limited, more or less to Northern Europe,” he said. “In the French Revolution, there was another catastrophe, but it was limited to France. The crisis after the Second Vatican Council, however, was the first truly global crisis.”

“We’ve paid a very steep price due to a secularized, worldly mentality,” he said.

That cost has been especially acute, Rodé believes, in religious life.

“The statistical data make the point,” he said. “Take the case of American nuns: There were 180,000 in 1965, and now they’re just 59,000. Most are getting older, and the vocations just aren’t there. We could say the same thing for the Jesuits, and for most of the great traditional congregations.”

Ask Rodé where he sees signs of hope, and he almost invariably talks about new congregations founded in the last several decades, rather than established orders such as the Dominicans, Jesuits and Franciscans.

“Here in my office, I meet people every week who are founders, men and women, who come here with new projects, new ideas,” Rodé said. “Last week, a Brazilian with an angelic face was here. He’s founding a community that’s a new edition of the Franciscan spirit. They go around with the tonsure like St. Anthony, in sandals, dressed like the poor. They’re in the favelas, working with at-risk youth, the homeless, and they’re itinerant preachers.”

“The new congregations are a reaction against the tendency [in religious life] toward secularization,” he said. “They wear the habit, always; they insist upon prayer and eucharistic adoration; they insist upon the common life; and they also have a great, great focus upon poverty.”

As for the more established orders, Rodé says, “At least at the level of the governments of these congregations, the major superiors, there’s an awareness that we have to change.” He said he’s cheered by data, such as that contained in a recent report by the National Religious Vocations Conference in the United States, indicating that orders with a more traditional spirituality often have better luck attracting new members.

Rodé insists he still has great faith in the perennial vitality of religious life.

“Religious have always been, as the French say, le marchant … those who take the lead in a battle,” Rodé said. “Innovation, new ideas, fresh responses to the problems of the society and the times almost always come from the religious, and then later they’re taken over by the hierarchical church.”

“I think that the most dynamic element, the most innovative element in the church, where the new energy of the Spirit makes itself seen, is the religious,” he said.

Rodé clearly believes some kinds of innovation are better than others.

“In my opinion,” Rodé said -- with a twinkle in his eye, but obviously not entirely in jest -- “the spirit of Anglo-Saxon pragmatism for which you’re known ought to lead to the obvious conclusion.”

The man at the center of the storms