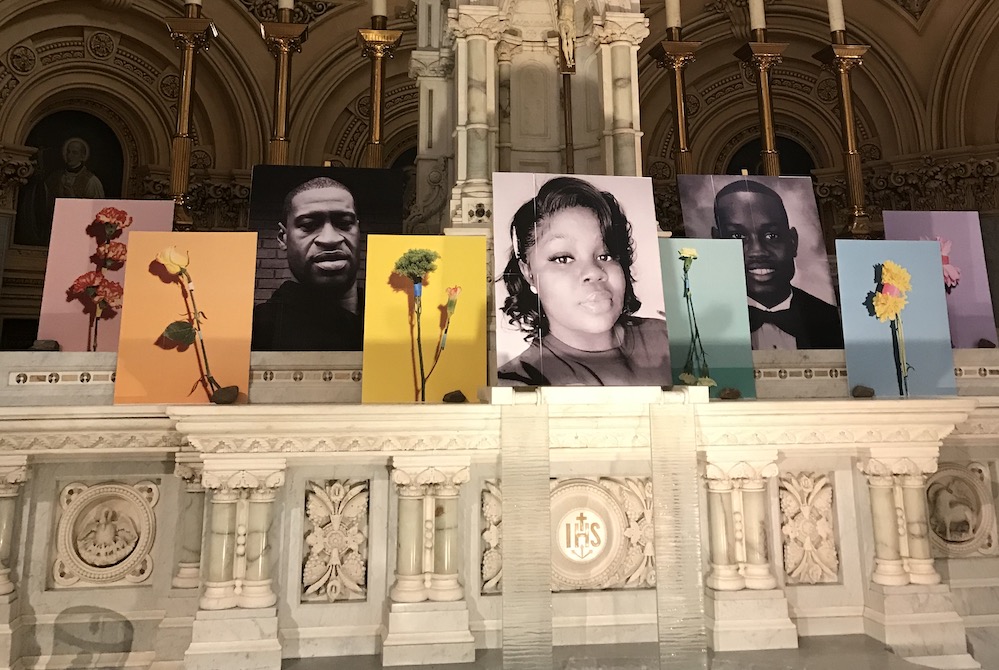 It is a trinity usually relegated to the news headlines, not often portrayed in Catholic churches.

Enlarged photographic images of Breonna Taylor of Louisville, George Floyd of Minneapolis and Ahmaud Arbery of Glynn County, Georgia, all Black people killed by law enforcement and those claiming to uphold the law, graced the interior of St. Francis Xavier Church here this summer.

At the conclusion of each Mass, a time which many Catholic parishes use for announcements, the Jesuit church in Manhattan's Chelsea neighborhood invites Mass-goers to recite a pledge to uphold racial justice. While the photographs are now gone, as the parish moves into a new liturgical year, the pledge remains.

The parish recognition of racial justice that took place over the summer, after the killing of Floyd and others sparked protests across the country, was part of a long educational process, parishioner Boreta Singleton told NCR.

"We remember their lives and that we have a long way to get to justice," she said about the photos of Floyd, Taylor and Arbery displayed in the church throughout the summer. The parish, known for its social activism, via a soup kitchen and outreach to LGBTQ  people and other groups, is near Union Square, a site of frequent Black Lives Matter demonstrations.

The pledge, recited after Communion at Sunday Mass, was borrowed from a Racial Equity Pledge from the First Unitarian Church in Dallas.

It calls for support for "justice, equity, and compassion in human relations" as well as an affirmation that "white privilege is unfair and harmful to those who have it and to those who do not."

The pledge calls for dismantling "the culture of white supremacy" and asks parishioners to "strive daily to understand white privilege and white supremacy and how their existence benefits me."

The weekly recitation of the pledge came after a period of reflection and discussion in the largely-white parish. Singleton, who is Black, notes that before this summer's events the parish had sponsored an adult education program featuring Craig Ford, of St. Norbert's College in De Pere, Wisconsin, and Fr. Bryan Massingale of Fordham University, two Black theologians who have written extensively on issues of racial justice and the Catholic Church.

With the help of a grant from Catholic Charities, the parish also sponsored joint events with St. Charles Borromeo Parish in Harlem and St. Francis de Sales Church on Manhattan's Upper East Side on the theme of racial justice.

"This is not something abnormal. This is something all churches should be doing," said Singleton. "Jesus wasn't one to shy away from issues that were controversial. I credit the Jesuits for doing what every parish should be doing, having the Bible in one hand and the newspaper in the other."

All the ministries of the parish were called upon to incorporate cultural diversity. Singleton, a member of the parish choir, noted that has included music in the African American tradition, as well as Filipino and Vietnamese hymns.

Jesuit Fr. Ken Boller, pastor of St. Francis Xavier, told NCR that parishioners have been largely supportive of the racial justice initiatives. But the pushback from conservative media has been intense, as some parish visitors have taken complaints to the web.

Tucker Carlson on Fox described the prayer "as a new kind of catechism" intended to "replace God with political orthodoxy." On that same program, evangelical author Eric Metaxas compared the parish initiative to Nazi usurpation of religion.

Commentator Michelle Malkin, a Catholic, on Twitter, displaying the photos of Floyd and Taylor, described them as "the new gods on display at St. Xavier Catholic Church."

Malkin has written for the New York Post and is a frequent Fox News contributor. Her support for a Holocaust denier and Charlottesville United the Right demonstrator has estranged her from some conservative groups.

The intensity of the pushback bothered St. Francis parishioner Matt Rosenwasser, a former volunteer hospitality minister. He sees it as a possible security issue.

"Given that these people are feeding information directly to angry and heavily armed people throughout the country, the threat to the parish of being attacked has grown exponentially," he told NCR in an email.

For Boller, the pushback reflects much of the wider divisions in the nation during this election year.

"We are praying to the same God. But we are divided in so many other ways," he said.

Patrick Egan, vice chair of the pastoral council at St. Francis Xavier, said that the commitment to racial justice is consistent with the parish's traditions.

"We have a long-standing commitment to Catholic social teaching that leads us to be in the forefront," he said. Most parishioners remain supportive, Egan told NCR.

He said the parish will continue its emphasis on cultural diversity and anti-racism efforts, even as other concerns, such as a testy post-election period and the ongoing pandemic, take over much of the public consciousness as the memories of this summer's demonstrations fade into memory in many quarters.

"We intend to maintain this for the foreseeable future. People really want us to maintain our focus, even when the issue is not in the headlines," he said.