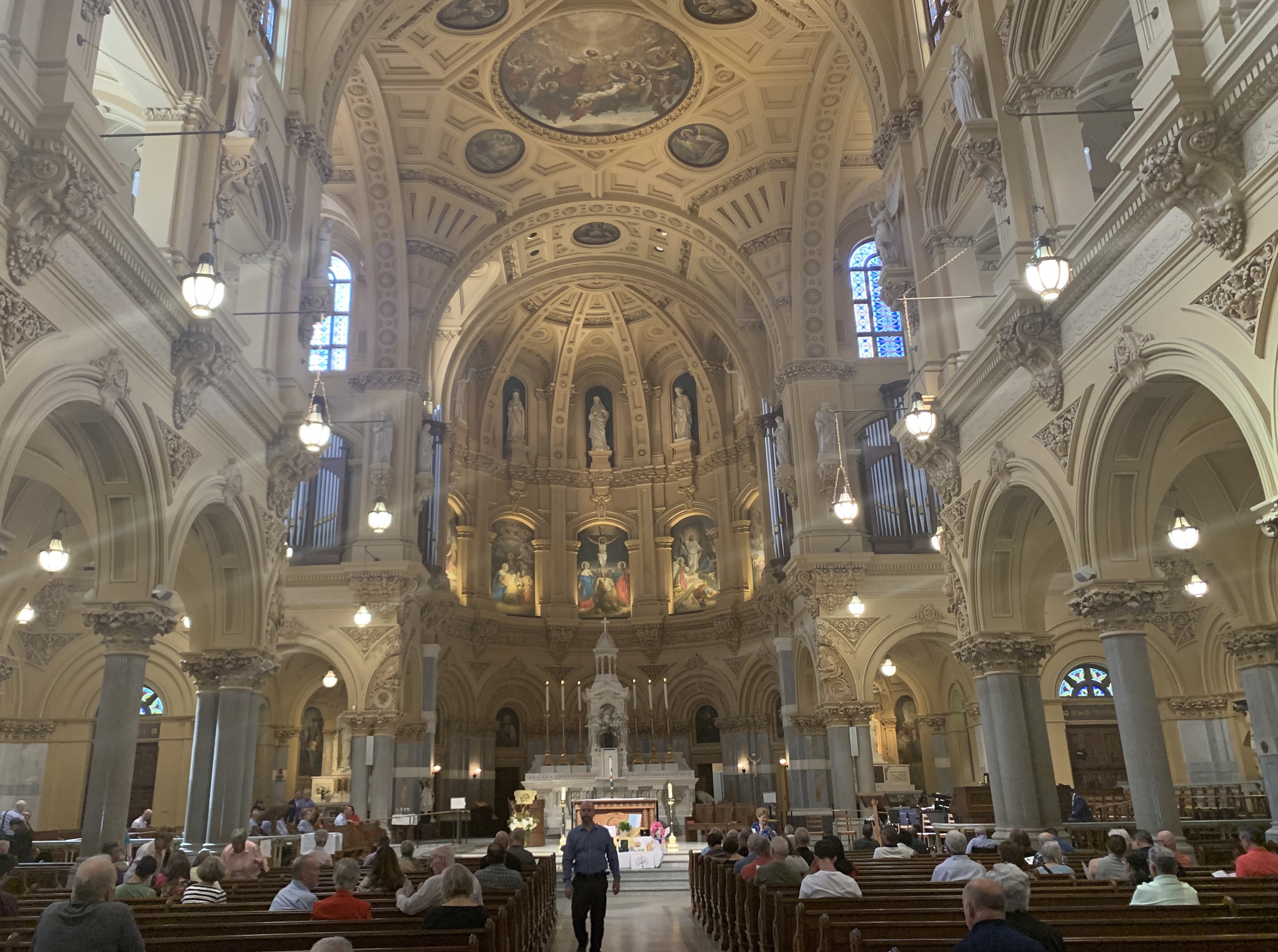 At the Church of St. Francis Xavier in the Chelsea neighborhood of Manhattan, parishioners begin to gather for the popular 11:30 a.m. Mass on a recent Sunday. (Derrell Bouknight)

At a crowded St. Francis Xavier Church, parishioners rise to recite the words to the "Our Father," and everyone motions without hesitation. Hands are raised, arms extended and fingers interlocked.

Parishioners of the church located in Manhattan's Chelsea neighborhood attend Mass knowing the environment they step into is one that embraces members of all backgrounds. The church's mission statement, posted on its website, states a commitment rooted through "powerful and creative discernment," while also emphasizing a respectful community where seekers are welcomed and injustice is challenged.

"This is a place that tries, intentionally, to be very welcoming of everyone," said Jesuit Fr. Ken Boller, who was introduced as the new pastor of the Jesuit parish in September. "With a lot of our groups and ministries, a lot of what we do centers around praying and supporting one another," he said.

Boller, a priest for 44 years, entered the Society of Jesuits in 1964. He spent time in Buffalo and then returned to Xavier High School in Manhattan in 1986, where he was headmaster before serving as president until 1997. 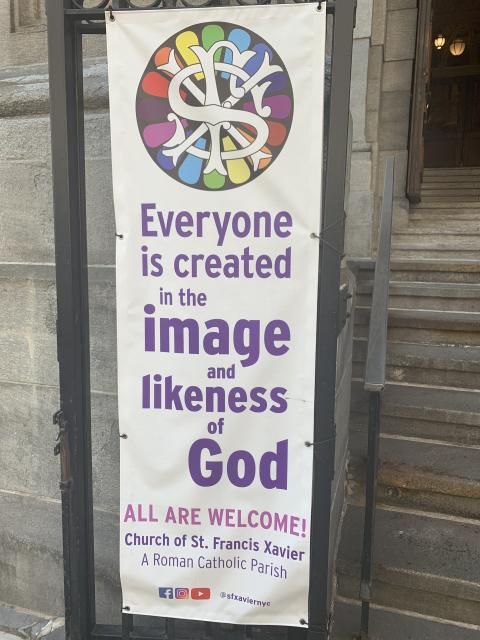 A welcoming banner is posted at the bottom of the church's steps. (Derrell Bouknight)

He also spent time in Harlem, serving as pastor of St. Aloysius Church before moving to president of Fordham Prep in 2004, where he spent nine years, and concluded his academic career at St. Peter's Prep in Jersey City.

Boller noted that parishioners come from all over New York's boroughs. He recalled a time in which he spoke to a parent group prior at one of the Sunday School programs. One parent, Boller said, observed that the church was one where people "want to be here."

"People will go out of their way to come here for the liturgy, for the community, for preaching that's not afraid to engage the issues at hand," Boller said.

St. Francis Xavier was founded in the summer of 1847. According to the church's website, Jesuit Fr. John Larkin was summoned by John Hughes, who eventually became New York archbishop. Hughes wanted Larkin to settle in New York from Kentucky to build a Jesuit parish and school in the city.

The first church was dedicated in October of that year after a $5,000 down payment was offered by a French muralist who had heard that American banks were unreliable. Despite the church's burning down in January of 1848, Larkin persisted, borrowing temporary space until a new church could be built next door to its current location.

Some 2,000 people worshipped in the church beginning on Dec. 3, 1882, after the cornerstone of the third church was laid. Close to 50 murals were painted by William Lamprecht, and Irish immigrant Patrick Keely spearheaded the design of the church, one of the 600 he laid out during his lifetime.

Today the parish is known for its social outreach. 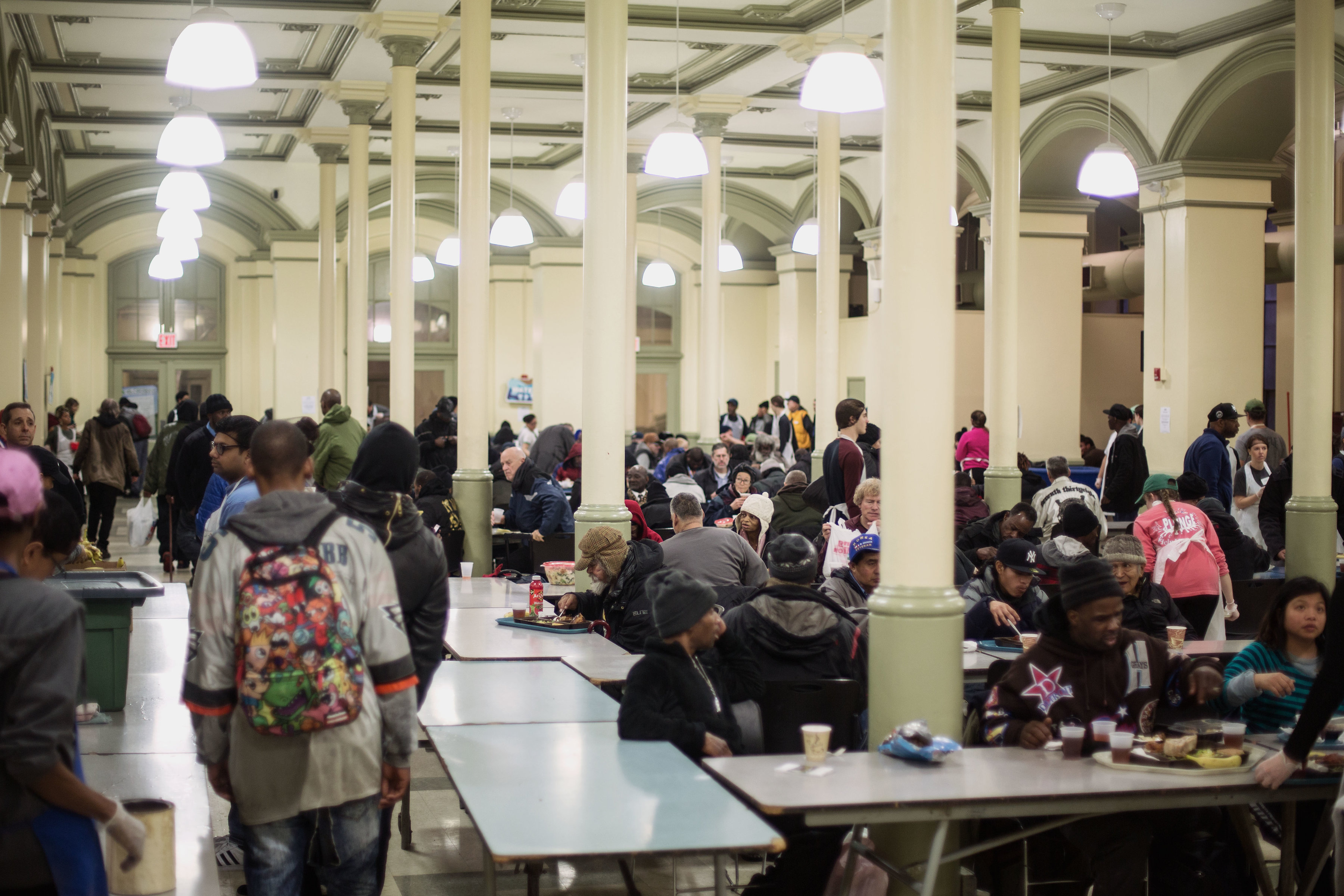 Every Sunday afternoon, the Xavier Mission offers the "Welcome Table," which feeds over 1,000 hungry people and provides them with clothing and toiletry kits. (Ashley Mosher)

The Xavier Mission, a secular "for-impact" organization that is separate from the church but was born from the outreach programs of the parish, focuses on aspects of social justice and volunteer work relating to the community. The Mission prefers the term "for-impact" rather than "non-profit" because it wants to be recognized for what it does as opposed to what it does not.

On Sundays before Mass, a line of people can be found adjacent to the church's entrance awaiting service in the downstairs soup kitchen. The Mission, primarily geared towards low-income residents, offers programs in life skills, trauma support, financial assistance, a food pantry and a clothing room.

Cassandra Agredo, the executive director of Xavier Mission since 2012, oversees the operation of the outreach programs. She said that many of the more than 5,000 volunteers who dedicate their time every year come from different parts of the city. Many, she said, are not Catholic.

"We have three full time people and two part time employees," Agredo said in a phone interview. "Some have been here since the beginning."

In 1983, Xavier Mission opened its doors. Volunteers — whom Agredo refers to as a "tight-knit group" — sign up and offer time to those who go to the church for its many services and programs. In the past, Xavier Mission has had so many volunteers that they had to find new tasks for those who came to assist.

During the blackout of 2003, which affected about 50 million people across eight states, one man was so determined to get to work that he walked from his home in the Bronx all the way to the church.

"One volunteer walked 12 miles from the Bronx to St. Francis Xavier just so he could unlock the doors and so guys could sleep in beds inside," Agredo said. 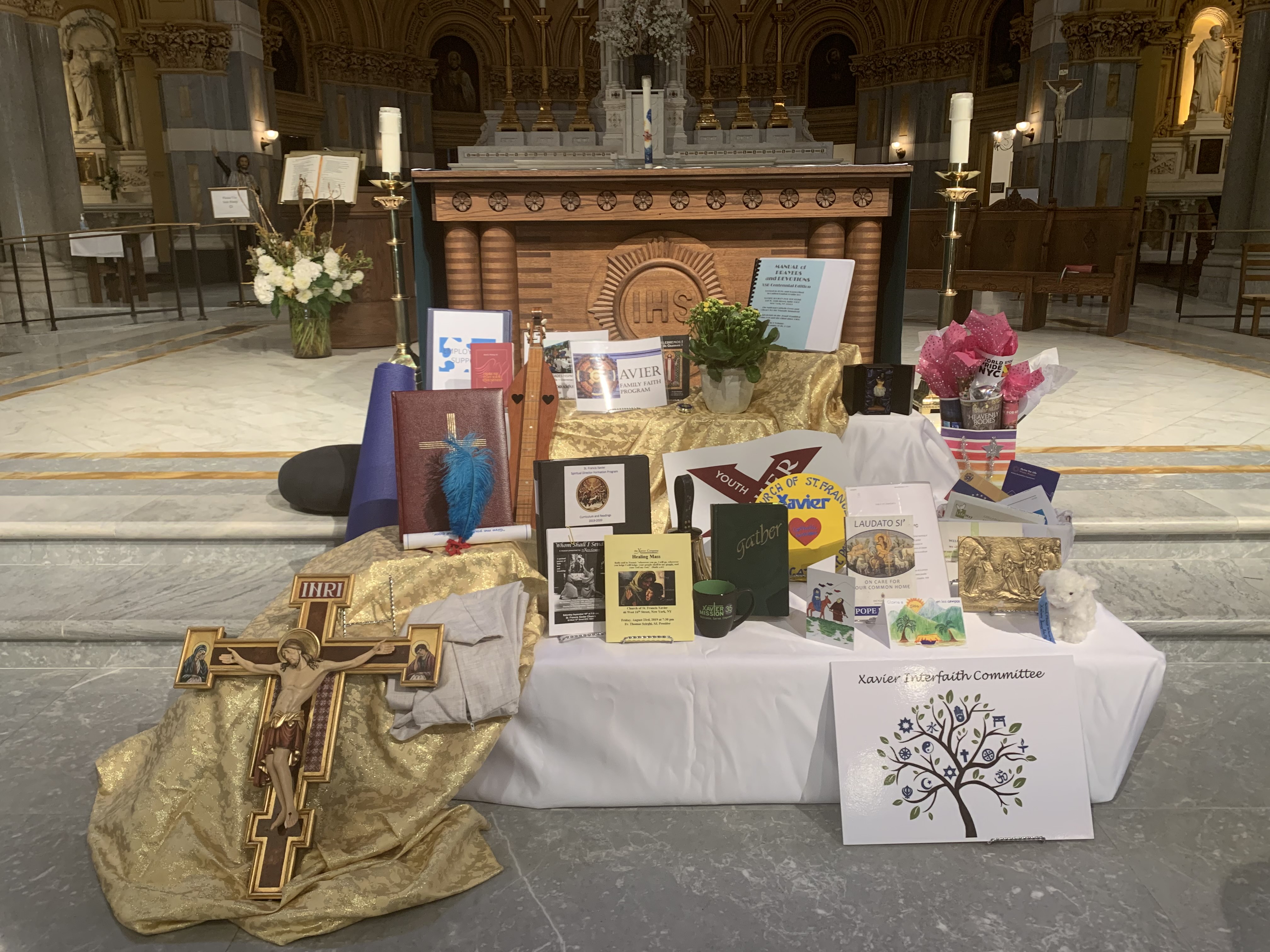 A display in front of the church's altar showcases St. Francis Xavier's many ministries. (Derrell Bouknight)

Agredo also noted the role the parish has played in the LGBT community. In addition to the numerous networks ranging from immigration help to meditation and youth ministry, the church also offers groups for LGBT Catholics and non-Catholics.

While Boller admitted that the task is difficult, he also explained why he believes St. Francis Xavier is moving in a positive direction, pointing to the welcoming setting and the homilies that encourage members of all backgrounds.

"The example is Jesus, he ate with sinners and drank with sinners and tax collectors," Boller said. "We welcome folks to come and to find their place in our prayer. We try to take people as they are and who they are. Each has an equal voice at the table.

"We're not in the enforcement business," he continued. "It's not a police department, it's a church. …We are a Catholic community, we are trying to treat people the way Jesus would."

At a retreat with the pastoral council that took place in September, the group discussed praying and planning. One of the most important elements that Boller takes into account, he said, is listening.

"We have an idealized picture that the shepherd is at the front of the flock of sheep and they follow him, that's not what happens in real life," he said. "In real life, the shepherd is usually in the middle of the flock or towards the end, making sure they're going in the same direction. It's not a question of setting priorities as much as getting to know this community and find out what their needs are."

[Derrell Bouknight is a freelance writer based in Queens, New York.]