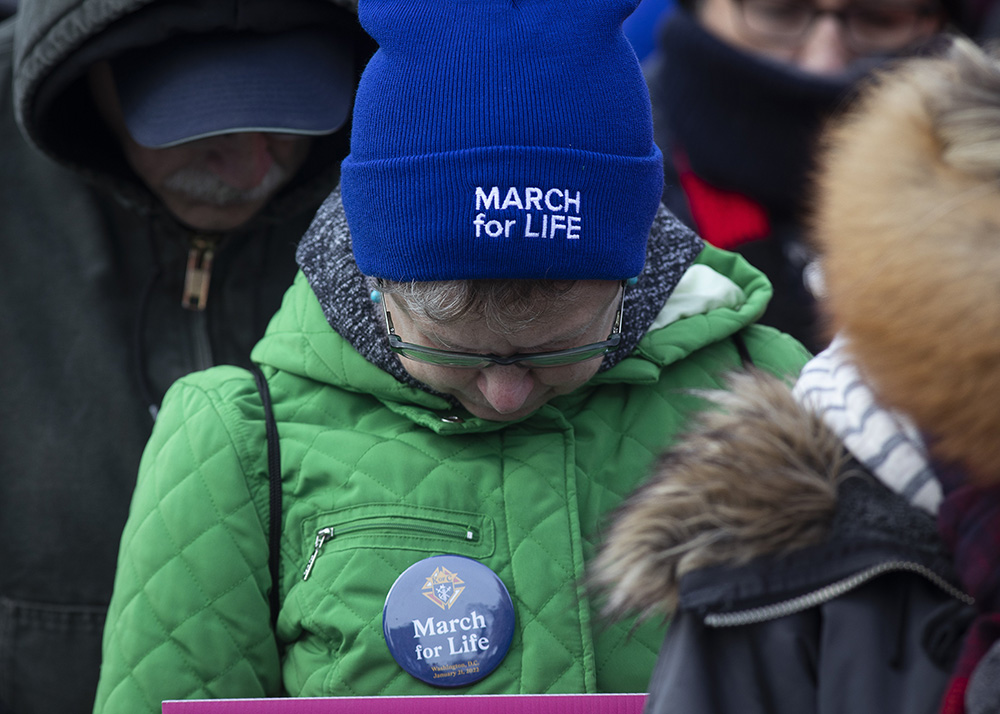 Nearly seven months since the U.S. Supreme Court struck down Roe v. Wade and returned the issue of abortion to the individual state legislatures, tens of thousands of anti-abortion activists will descend on Washington, D.C., for the 50th annual March for Life on Jan. 20.

They will march during a historical juncture for the pro-life movement, which is celebrating the landmark goal of overturning Roe even as the movement has since been on the receiving end of an electoral backlash where abortion rights activists prevailed in several state-level ballot initiatives and pro-choice Democrats fared better than expected in the 2022 midterm elections.

"The pro-life movement has just experienced a major victory in the fall of Roe v. Wade, but our work to build a culture of life is far from complete," Jeanne Mancini, the president of March for Life, told NCR in a prepared statement that referenced the 1973 landmark abortion ruling that the high court reversed in June 2022 with Dobbs v. Jackson Women's Health Organization.

Mancini said the march will reflect upon Dobbs "as a critical milestone" while looking forward "to the next steps."

Signaling a new phase for the movement, activists in 2023 will march to the steps of the U.S. Capitol instead of the Supreme Court. 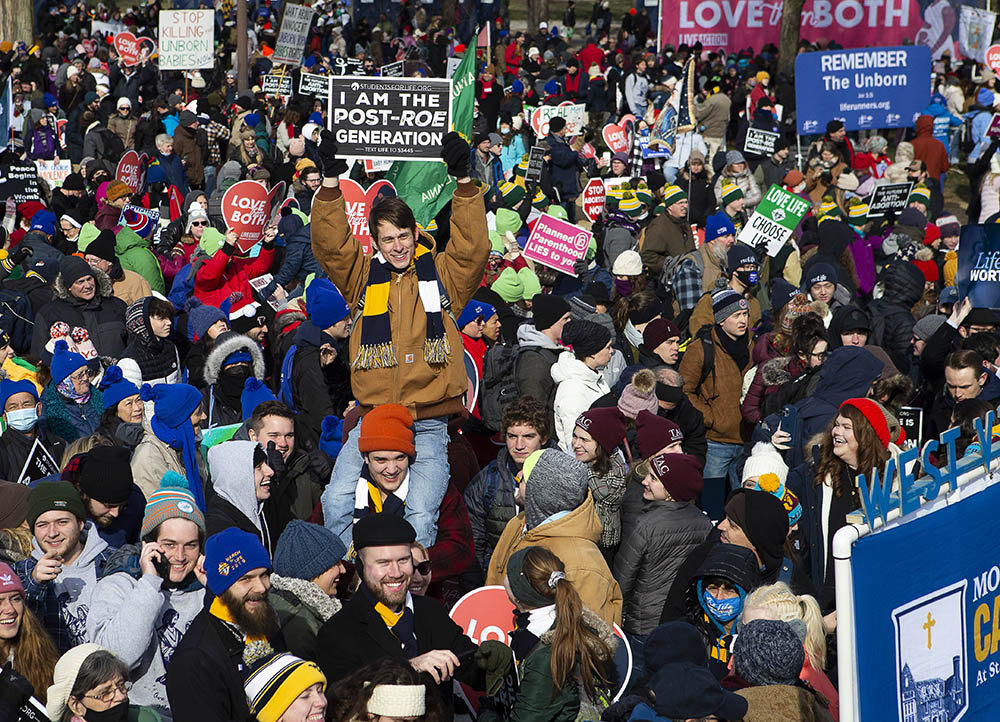 "Those next steps include working to advance legal protections for the unborn at the state and federal level," Mancini said.

Since Roe's overturning, 24 states have banned abortion or are likely to do so, according to a January 2023 report by the Guttmacher Institute, a think tank that supports abortion rights. Legal challenges are pending in several of those states.

On Jan. 11, the Republican-controlled U.S. House of Representatives passed a pair of symbolic anti-abortion bills that are not expected to be acted upon in the Democratic-controlled Senate. One of the bills, the Born-Alive Abortion Survivors Protection Act, would require health care providers to care for infants born after an attempted abortion. A 2002 federal law already mandates that health care professionals provide medical care to infants born at any gestational age.

In October, she also described as "sensible and compassionate" a bill that Sen. Lindsey Graham, R-South Carolina, sponsored to ban abortions after 15 weeks of pregnancy. Other antiabortion leaders supported the legislation even though congressional Republicans distanced themselves from it.

Democrats seized upon Graham's bill to portray the GOP as extremist on the issue, a strategy that seemed to resonate with voters. The Democrats increased their majority in the U.S. Senate while Republicans underperformed in securing the House with a slim majority.

Meanwhile, voters in Michigan, California and Vermont in November chose to enshrine abortion rights in their state constitutions. In Kentucky and Kansas, voters rejected constitutional amendments that would have said residents in those states had no right to an abortion.

"It seems to me we're discovering that voters are generally in the middle" on abortion, said Mary Ziegler, a law professor at the University of California Davis School of Law who is a leading historian on the abortion debate in the United States. 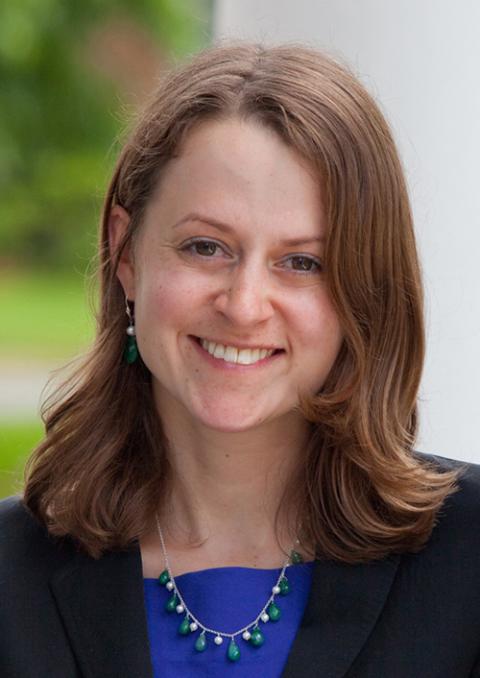 Ziegler noted in an interview with NCR that multiple public opinion polls over several decades show that voters in the United States generally support keeping abortion legal while favoring some restrictions earlier in pregnancy. She said voters "rebel" when the opposing sides make absolutist demands.

"Some people [in the antiabortion movement] have returned to the old playbook of saying the real problem was that the Republicans were running away from their position on abortion, rather than the real problem being that voters are kind of in the middle on abortion. And now that Roe is gone, that's opened the door to bills that would criminalize abortions all together, and a lot of voters don't like that," Ziegler said.

The "savvier players in the movement," Ziegler said, have responded to the electoral setbacks by noting that antiabortion governors won reelection in conservative states such as Texas, Florida and Ohio.

Ziegler said the movement still has "a lot of opportunities at the state and local levels to continue doing what they want to do and pushing even further than just criminalizing abortion."

That prospect terrifies abortion rights activists such as Jamie Manson, the president of Catholics for Choice who often cites polling that indicates nearly 70% of Catholics in the United States did not support overturning Roe v. Wade.

"Anti-choice values and the Republican Party are completely wedded now," Manson said. "The fact you can't be a Republican and be pro-choice is really stunning. Being anti-choice is the litmus test for a bona fide Republican." 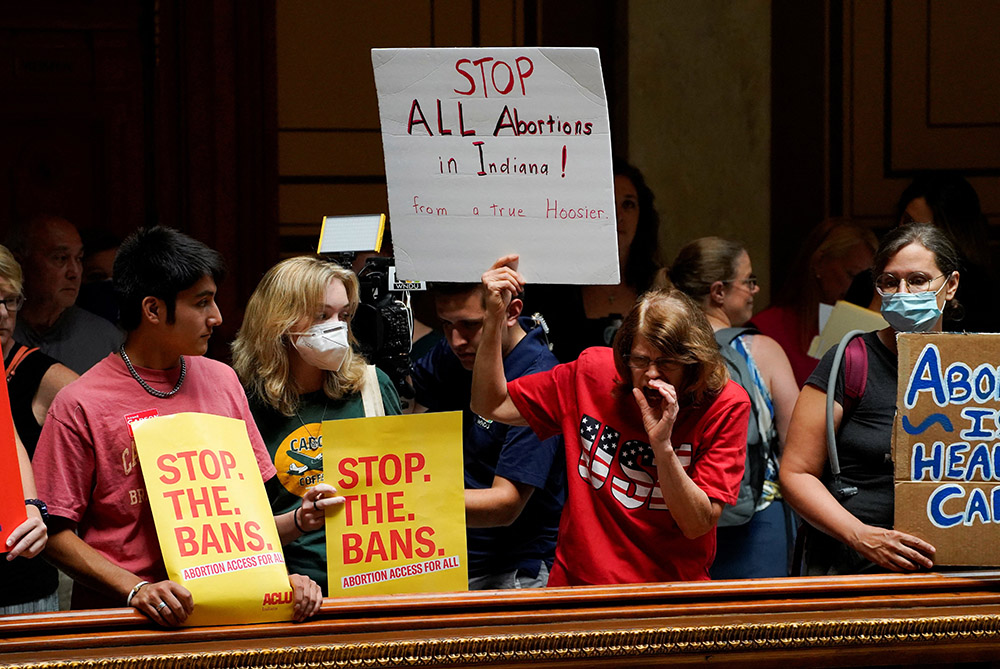 Activists protest inside the Indiana Statehouse in Indianapolis July 25, 2022, during a special session debate on banning abortion. (CNS/Reuters/Cheney Orr)

Conservative Republicans and right-wing personalities have often appeared as featured speakers during the March for Life's rally. President Donald Trump and Vice President Mike Pence addressed marchers in recent years. In 2023, House Majority Leader Steve Scalise will address marchers, as will the Rev. Franklin Graham, the president of Samaritan's Purse who was one of Trump's staunchest supporters on the religious right.

When Trump was president, the March for Life's political nonprofit organization, March for Life Action, mobilized tens of thousands of activists to petition Congress in support of Trump's nominees to the Supreme Court. Over the last decade, March for Life Action also worked with House Republican leadership to support and pass various anti-abortion bills.

Those political ties lead Manson and like-minded activists to see a figure like Frank Pavone, the national director of Priests for Life, as somewhat of an avatar for the pro-life movement: right-wing, outspoken, aligned with Trumpian politics, unabashedly partisan, and unapologetic about the tactics used in the fight against abortion.

In December, the Vatican laicized Pavone after finding him guilty in canonical proceedings of "blasphemous communications on social media" and of "persistent disobedience" of his bishop. In the weeks since, on his personal website and in several interviews with right-wing outlets, Pavone has presented himself as a victim of longtime grudges and resentments in the hierarchy.

Pavone and his associates will attend the March for Life and plan to host several related events in Washington, D.C. 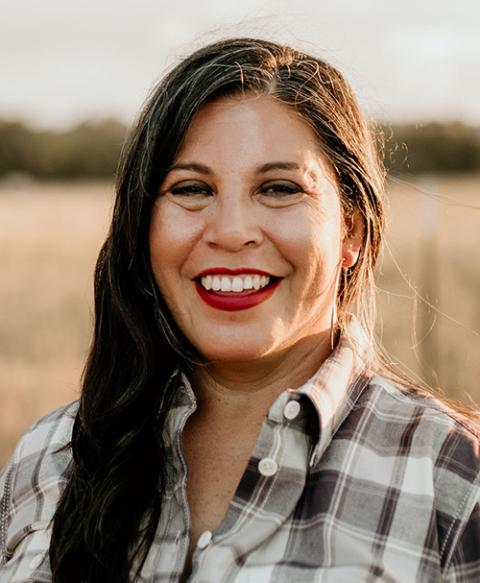 "For me, what he represents is the real agenda of the right-wing movement that has used abortion as an animating force," Manson said.

Leticia Ochoa Adams, a Catholic author and speaker who lives outside Austin, Texas, told NCR she worked at a crisis pregnancy center and used to be involved in the antiabortion movement. But that began to change, Adams said, when she saw leaders in the movement excusing Trump's rhetoric "that violated the dignity of so many human beings."

"The racism, sexism, overall lack of respect for anyone other than himself, and the blasphemy, all of it ignored for a win for the [pro-life movement] rather than upholding the dignity of the human person," she said.

Adams today describes herself as a "whole life Catholic" who prefers to meet people in her community and build relationships. Prior to speaking with NCR, she had just given three-dozen eggs from her chickens at home to single parents.

"I don't need to spend money on marches and protests," she said. "I need to actually be what I said I was in my life within the community I live in. Don't need a movement for that."

However, Laura Antkowiak, a political science professor at the University of Maryland who has studied the pro-life movement and wrote a book about pregnancy resource centers, told NCR that the partisan reputation overlooks the diversity of opinions and roles within the movement. 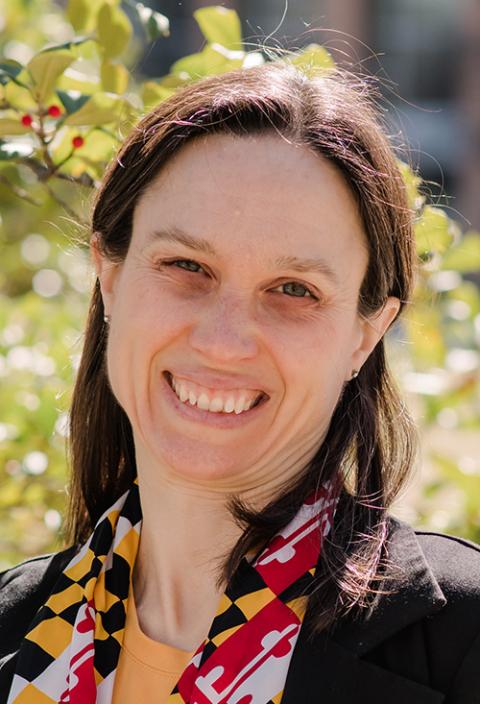 She said many people who volunteer and work in pregnancy resource centers are not involved with or pay much attention to the movement's political wing. She said people in the movement also have differing views about the government's role in providing a safety net to support women in crisis pregnancies.

"The movement is in a better position than the media narrative would suggest, at least if you look at indicators like where public opinion is at, and the high level of commitment that activists who have been involved in that movement are still bringing to it," said Antkowiak, who noted that the public has concern and compassion for women in a post-Roe America.

"That sense of compassion makes it difficult to embrace the total ban on abortion position. The public has a hard time squaring that," she said.

"My own hunch is that if the pro-life movement and others could do a better job of selling an alternative vision of what life would look like in a post-Roe world, including one that provides an array of supports for women, whether through public policy and in the workplace, and is a much more loving society than the one that we have today, I think that's something that could be compelling," said Antkowiak, before adding: "But that's a tough narrative to write."