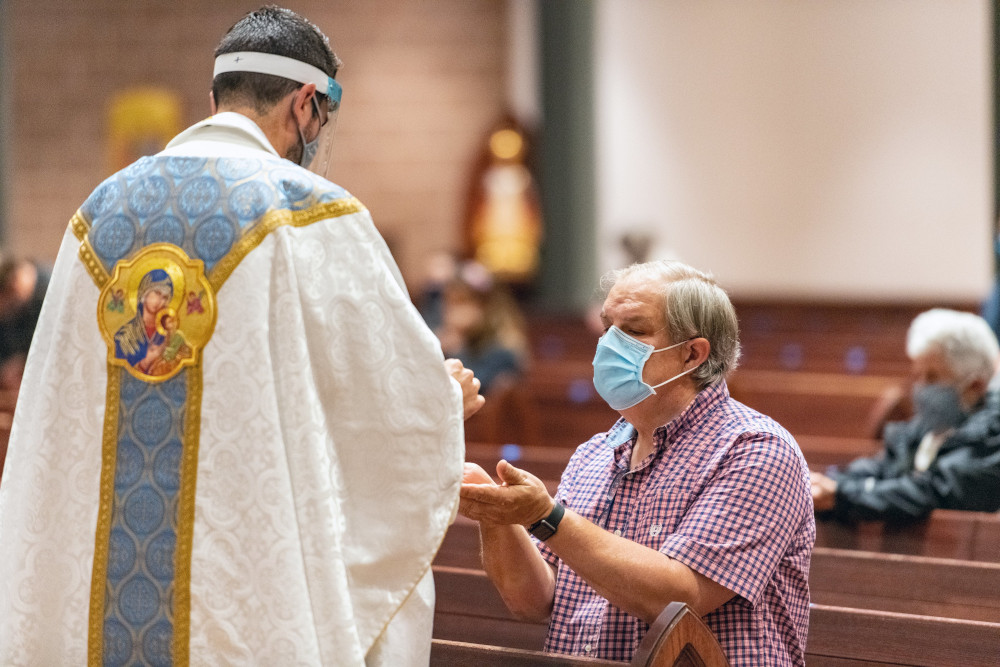 On Sept. 13, Mark Galli will stand before Bishop Richard Pates in the Cathedral of St. Raymond Nonnatus in Joliet, Illinois, to hear these words:

"Francis, be sealed with the gift of the Holy Spirit."

Pates will then dab Galli's forehead with anointing oil (using a cotton ball instead of his thumb due to COVID-19).  And with that, Galli — who has chosen his confirmation name after St. Francis of Assisi— will become a Roman Catholic.

Galli's journey to Catholicism is notable, in part because of the nation's political climate.  A former Presbyterian pastor, Galli spent seven years as editor-in-chief of Christianity Today, the premier publication for evangelicals whose founder was the legendary evangelist Billy Graham.

But for a few days last December, Galli was perhaps the most well-known evangelical in the country – after penning an editorial calling for Donald Trump's impeachment and removal from office and arguing he was "profoundly immoral."

It went viral, earning a rebuke from Trump on Twitter, and bringing Galli — who retired from the magazine in January — a tsunami of publicity. Some of his fellow evangelicals praised the editorial as courageous, given their movement's overwhelming support for the president.

Trump's evangelical supporters labeled it misguided and out of touch.

Now, two months before the election, with evangelical allegiance to Trump polling as strong as before, Galli is leaving the fold.

As with most conversions, however, Galli insists his is personal, not political.

Now 68, he had already decided by the time he wrote the 2019 editorial that he would quit the Anglican Church he had attended alongside his wife, Barbara, for 20 years. His conversion was one reason he decided to retire from Christianity Today on Jan. 3, after 30 years as a writer and editor in the news outlet's stable of publications.

"I'm not rejecting evangelicalism," he said recently in an interview from his home, a few blocks away from Wheaton College, the preeminent evangelical school. "I'm only taking Anglicanism deeper and thicker."

A contrarian who can be at turns gruff and tender, Galli is not embracing liberalism. Politically he remains an independent and considers himself a Burkean conservative — one who believes in honoring tradition and in slow and cautious change.

In that spirit, Galli's late in life conversion has been gradual and carefully considered.

The first inkling came in 1994 when he served as editor of a magazine called Christian History and wrote a cover story on St. Francis of Assisi, whom he admired for his message of simplicity, poverty and submission to church authority even when he knew the church was not always right.

In the intervening years, Galli has slowly moved away from the evangelical mainstream. He started out a Presbyterian, then became an Episcopalian and an Anglican. For a time he attended an Orthodox church.

Two years ago when Galli expressed an interest in attending the course of study for Catholic converts called Rite of Christian Initiation for Adults, his teacher John Ellison, himself a convert, knew Galli's mind was made up.

"Once something commends itself to you as true and real, even if it's inconvenient, you either look the other way and pretend you didn't see it," said Ellison, "or you do something about it." 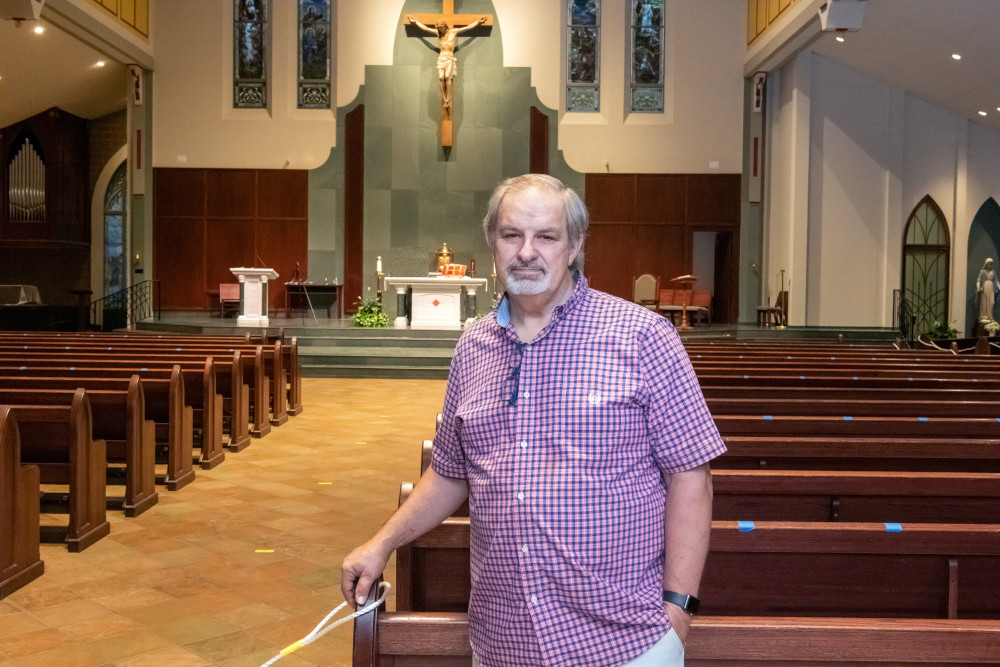 About 34% of American adults have adopted a religious identity different from the one in which they were raised, a Pew Research study found.

For Catholics, most of the switching is away from the faith, not toward it. Among U.S. switchers, Catholicism has experienced the greatest net losses. For every convert to Catholicism, six others no longer identify as such.

But there is also a long and storied tradition of Protestants converting to Catholicism. They include Elizabeth Ann Seton and John Henry Newman, now saints. There's Dorothy Day, founder of the Catholic Worker movement, who is being considered for sainthood. Then there's the English essayist G.K. Chesterton and the English actor Alec Guinness and former British Prime Minister Tony Blair.

Some converts are drawn to the beauty of Catholic ritual. Others to the church's rich intellectual tradition or the centrality of the Eucharist, the bread and wine used for Communion, which Catholics believe becomes the body and blood of Jesus Christ.

For Galli, all those things were important. So was a certain weariness with the constant theological polemics and splinters in the evangelical world.

"I want to submit myself to something bigger than myself," Galli said.

"One thing I like about both Orthodoxy and Catholicism is that you have to do these things, whether you like it or not, whether you're in the mood or not, sometimes whether you believe or not. You just have to plow ahead. I want that. If it's left up to me, I am one lazy son-of-a-bitch. I will not do anything unless someone comes along and says, 'You need to do this. This is really important. This will shape your life. Come on, Galli. Get off your butt.'"

For the past two years, Galli has been attending the daily 6:30 a.m. Mass at St. Michael Catholic Church, a large parish with about 3,000 families about two miles from his home. He goes to confession twice monthly. Lately, he has been volunteering to welcome people to the confession room, and sanitize chairs and door handles in between sessions.

He said he was "miserable" during the first two months of the pandemic when the church was closed.

"The Mass is a perfect Mark Galli service," he said. "There's no singing. There are no hymns. The homily is five minutes. The whole service is 25 minutes. They give you a single thought, a single illustration, a quote, and you're done. Wow."

In some ways, Galli is not a convert. He's a revert.

Born in California, Galli was baptized a Catholic and underwent First Communion, mostly, he said, to please his grandmother. By the time he was 7, his parents quit going to church.

But the summer Galli turned 13, his mother had a born-again experience while watching Billy Graham on TV.

After that, he and his mother attended a "very conservative" evangelical church where Galli answered an altar call and accepted Jesus. In his teens, and later at the University of California Santa Cruz, where he majored in history, Galli attended Presbyterian churches. After graduating from Fuller Theological Seminary, he pastored churches in Mexico City and Sacramento.

While still a pastor, Galli discovered the Book of Common Prayer, the devotional used in the Anglican Communion, and began using it in his morning prayers instead of formulating his own unscripted version.

"I was tired of the trite phrases I used all the time," he said. "The Book of Common Prayer had these magnificent prayers of praise and confession and thanksgiving, and I thought, 'That's what I want to say!'''

In 1989, Galli accepted a job as associate editor at Leadership Journal, a onetime staple of Christianity Today's roster of publications, and moved his family from California to the Chicago suburbs. There, the family joined St. Mark's Episcopal Church, where Galli fell in love with the sacraments and the liturgy. He turned in his Presbyterian ordination credentials.

But the struggles over homosexuality beginning in 2003 when the Episcopal Church ordained its first openly gay bishop, and later, his quest as editor-in-chief of Christianity Today to hold an increasingly fractious evangelical world together, took a toll.

As traditionalists, opposed to gay ordination, the Gallis joined Church of the Resurrection, part of the Anglican Church in North America, the breakaway group that left the Episcopal Church. Barbara, who resettles refugees for World Relief, remains an Anglican.

Then for the past seven years as editor-in-chief of Christianity Today, Galli worked to provide readers a broad tent for Christian concerns, even as white evangelicals became inextricably intertwined with Republican politics and Donald Trump.

It was a source of ongoing frustration.

"On the whole, he wanted to lead and shape a magazine that reminded evangelicals of the good things about their movement, especially at a time when many of us have seen ugly dimensions of the movement," said Katelyn Beaty, a writer and editor who was managing editor of Christianity Today from 2006 to 2016.

Up until Galli's editorial calling for the president's removal, Christianity Today was mostly quiet about Trump. The directive was to remain above the fray.

Even as Galli decided Christianity Today should publish an editorial ahead of the president's impeachment — as it had in the run-up to President Bill Clinton's impeachment in 1998 — he was still unsure he wanted to rattle the cage.

"I sat down to write a typical Mark Galli: 'On the one hand, on the other hand. Let's listen to one another,'" he said. "I thought about it for a little bit and decided, 'You know, I can't do it anymore.'" 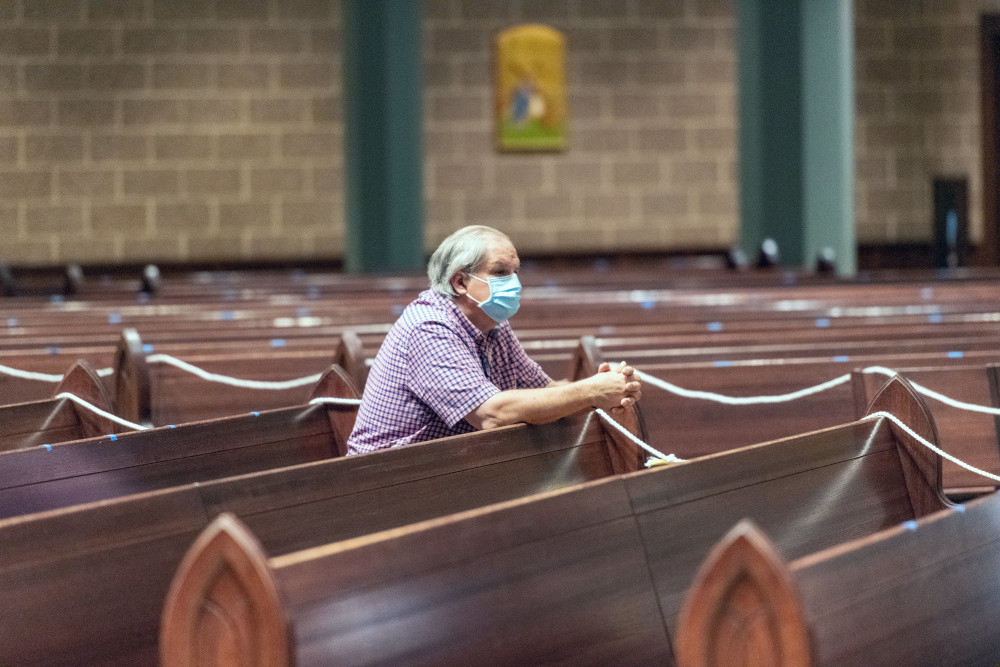 Living under a structure

If Galli had one gnawing frustration with Protestant Christianity, it was the ceaseless splintering and divisions. He tried to work toward unity.

It left him exhausted.

That left him with a choice, he said — to join the institution that claims to be the one true church.

"True unity requires not just a mental and emotional assent, but actually an agreement to live under a structure, an ethos, a way of doing things together," he said.

To be sure, the Catholic Church is also beset with factions and theological controversies, but now retired and a layman, he'll be a step removed from the squabbles.

Galli conceded that some Catholic doctrines still sit uncomfortably with him.

Then there's the ongoing clergy sexual abuse scandal. Galli made his decision to join the Catholic Church the very week a Pennsylvania grand jury issued a report showing at least 1,000 cases of abuse by 300 predator priests spanning seven decades.

"The church is deeply in need of reform," he conceded. "I'm not joining this holy institution that has it all right. I want to be one with these Christians who I think represent the true church in some sense."

Francis Beckwith, a philosophy professor at Baylor University who was president of the Evangelical Theological Society before becoming a Catholic, said conversion can't be easily rationalized.

Galli, who had planned for his confirmation at Easter before the coronavirus hit, has not wavered.

He said he reminds himself of the breadth and depth of the Catholic saints: Augustine, Aquinas, Benedict, Ignatius and, of course, Francis of Assisi, about whom he wrote a book. And he's dazzled.

On Sunday, Ellison, his sponsor, will join him at the cathedral in Joliet. COVID-19 rules do not allow Galli to bring guests. The 22 adult confirmands will wear masks and sit at a distance. It's not the confirmation he envisioned. But it's one he'll live with.