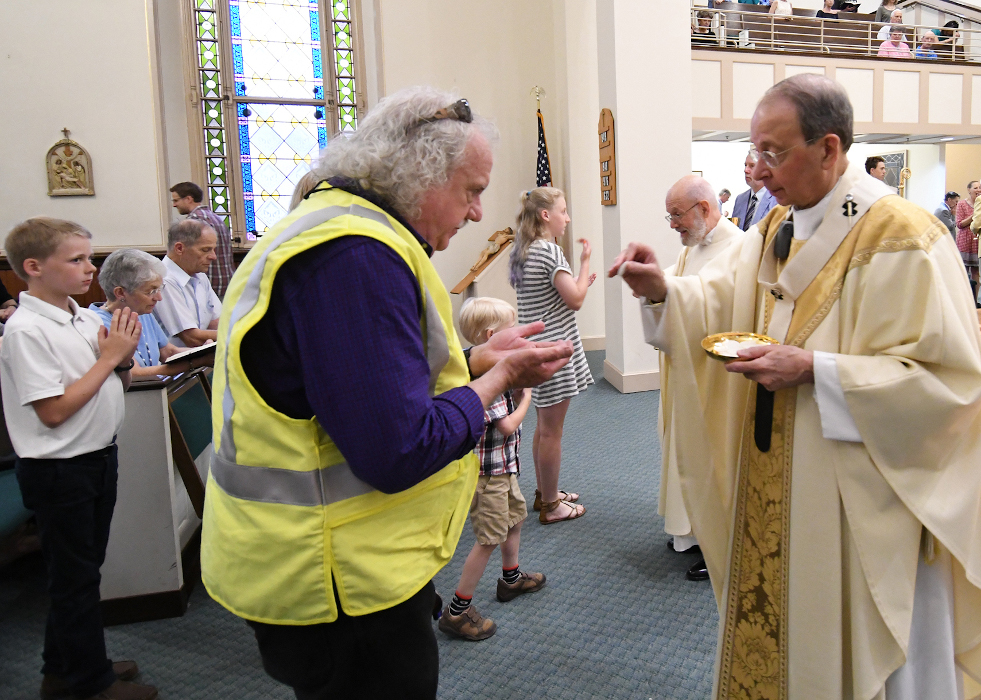 Baltimore Archbishop William E. Lori gives Communion to Kevin Marron, a Baltimore Gas and Electric employee, during a June 2, 2018, Mass at St. Paul Church in Ellicott City, Md. On May 26, 2020, public officials in Howard County, which is in the Baltimore Archdiocese of Baltimore, withdrew regulations that seemed to disallow the distribution of holy Communion. The rules originally prohibited the distribution food and drink during or after religious services. (CNS/Richard Lippenholz, special to the Catholic Review)

Regulations for the reopening of religious institutions developed by a Maryland county that seemed to disallow the distribution of holy Communion were withdrawn after church leaders voiced opposition.

Public officials in Howard County in the Archdiocese of Baltimore originally prohibited the distribution food and drink during or after religious services.

The regulation was included in an executive order issued May 26 by Howard County Executive Calvin Ball related to the reopening of churches and in-person religious services.

After the Archdiocese of Baltimore expressed "serious concerns" about the order, the county agreed to withdraw the restriction.

The order allowed barber shops and hair salons to open at 50% of maximum occupancy starting at 7 a.m., May 29. But the same order continued to limit indoor religious gatherings to no more than 10 people; outdoor religious services would be capped at 250 people.

Such a prohibition would restrict the distribution of holy Communion, an integral part of the Mass. In fact, if the priest could not consume the Eucharist after consecration, the Mass would not be valid.

The order also required that all attendees at indoor or outdoor religious services maintain a 6-foot distance and wear face masks or facial coverings at all times.

"For the Catholic community, the reception of Communion is central to faith lives and to our public worship. The Archdiocese of Baltimore has developed thorough and carefully thought-out guidelines for resuming public Masses, including detailed guidance on the safe distribution of Communion," the archdiocese said in a statement May 27.

"These guidelines respect both the sanctity of the sacrament and the need for abundant caution to protect the health and safety of both those receiving and distributing Communion," the statement said.

A spokesman for the county, Scott Peterson, said May 28 in a statement that because Maryland Gov. Larry Hogan had announced a modified reopening of restaurants in the state starting May 27, the county would revisit all restrictions on food consumption. "As we move closer to a full Phase 1 reopening, we will be lifting food consumption restrictions for faith institutions," Peterson said.

The county planned to "work with our faith leaders to provide guidelines that will allow residents to worship safely and all religious leaders to resume practices safely," the spokesman added.

He acknowledged that the archdiocese had already released its guidelines for its first phase of reopening, which began for some parishes May 15, and a second phase, set to begin May 30-31.

He said the archdiocese's guidelines for reopening as well as other will be considered by the county as it executes its plan.

Mary Ellen Russell, archdiocesan spokeswoman, said the archdiocese would continue working with all local jurisdictions. "We are very pleased to hear that Howard County will be lifting its restrictions on faith institutions regarding food consumption," she said.

"We are grateful to County Executive Ball and his team for working closely with our community and many others to ensure the health and safety of all while respecting essential elements of our faith traditions. These are unchartered waters for all in leadership, and it is essential that we continue to work together for the common good," Russell said.

Earlier the archdiocese released guidelines for a second phase for beginning the celebration of public Masses where appropriate.

Parishes will be allowed to celebrate Masses starting May 30-31 at one-third of capacity only if a local jurisdiction is allowing religious services for more than 10 people and a parish has taken all precautions necessary for sanitizing and maintaining social distance.

Because Howard County is one of several Maryland jurisdictions that are not allowing religious gatherings of more than 10 people, parishes there could not celebrate public Masses, but could still have wedding or funeral Masses with a maximum of 10 people in attendance, according to the archdiocesan guidelines.

The archdiocese's statement said that upon learning of the executive order, church leaders shared its second phase guidelines for distribution of holy Communion with the county and expressed "our own serious concerns about their recent guidance preventing Catholic churches in Howard County from distributing Communion."

"While we recognize and value the urgent desire to guard the health and safety of local communities that is guiding the decisions of our government leaders, we are committed to engaging in dialogue with them to work together toward a policy going forward that balances the need for free expression of religious faith and the public's health and safety interests," the statement said.