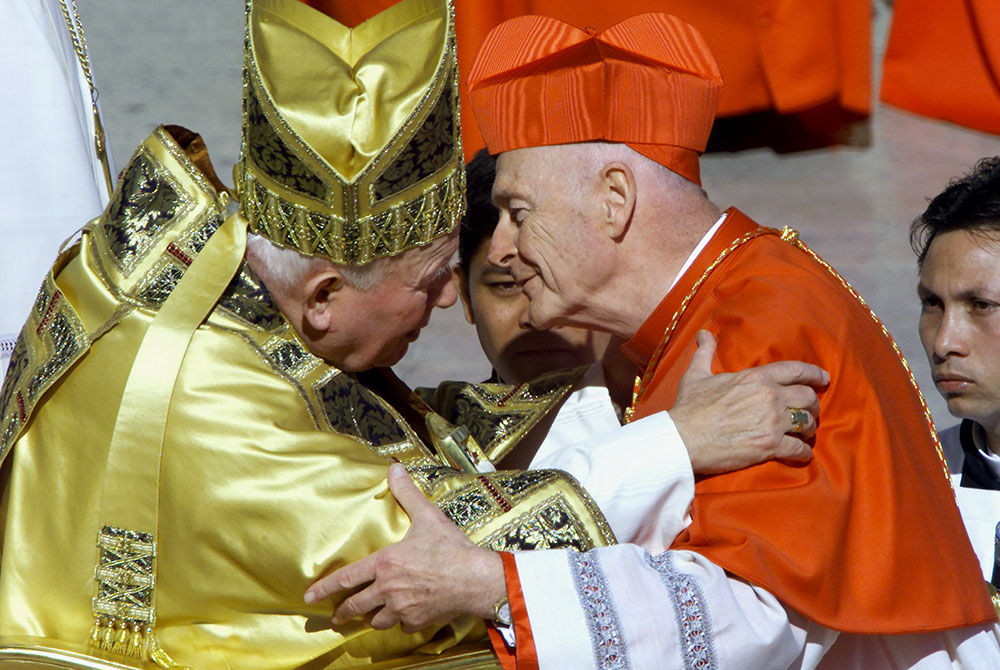 The Vatican's explosive report on the career of disgraced ex-cardinal Theodore McCarrick makes one thing devastatingly clear: the late Pope John Paul II decided to appoint the priest as archbishop of Washington despite repeated warnings from high-level advisers on both sides of the Atlantic.

The drama surrounding the pontiff's decision in 2000 takes up nearly 15% of the 450-page report and includes a severe warning against promoting McCarrick from New York's Cardinal John O'Connor, similar advice from the Vatican's then-ambassador to the U.S., and Vatican officials asking John Paul to sign his orders on the matter, in actions that now appear oddly prescient.

O'Connor's letter, which had not been previously published before release of the Nov. 10 report, is especially charged. The cardinal, then one of the highest figures in the American church, relayed reports from what he identified as "impeccable authorities" that McCarrick had been the subject of anonymous allegations and was known to invite seminarians to sleep in the same bed as him.

About the possibility of promoting McCarrick beyond his then-role as the archbishop of Newark, O'Connor wrote: "I regret that I would have to recommend very strongly against such promotion." 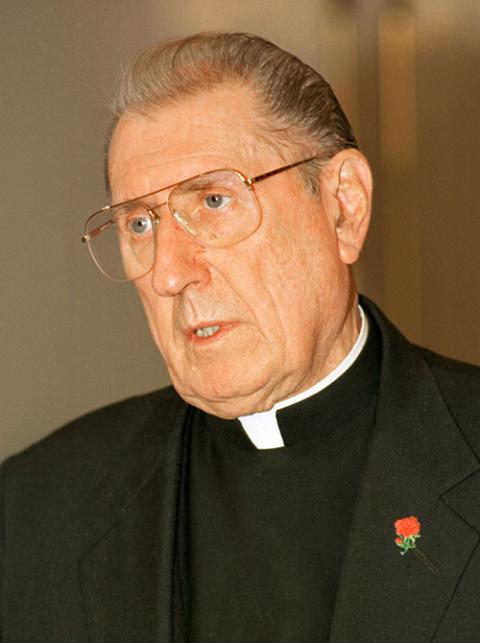 Cardinal John O'Connor of New York is pictured in Washington in this 1999 file photo. (CNS/Nancy Wiechec)

O'Connor, who sent the letter on Oct. 28, 1999, as he was suffering from brain cancer that would lead to his death only seven months later, also said he had "grave fears" about the possibility of the promotion and the "grave scandal" it could cause the church.

O'Connor's letter was sent to Archbishop Gabriel Montalvo, the Vatican ambassador. Montalvo sent it on for review by Archbishop Giovanni Battista Re, who was akin to the pope's chief of staff from 1989-2000. Re shared it with John Paul.

In a note accompanying O'Connor's letter, Montalvo said there was "the possibility of causing a scandal of great proportions," and suggested leaving McCarrick in Newark, or even "entrusting him with some other duty outside the United States."

Yet, John Paul's appointment of McCarrick as the fifth archbishop of Washington would be announced on Nov. 21, 2000. John Paul would make the archbishop a cardinal on Feb. 21, 2001.

Now aged 90, McCarrick was long one of the most influential prelates in the U.S. Catholic Church. In June 2018, four American dioceses announced that an allegation of sexual abuse by McCarrick had been found "credible and substantiated."

Pope Francis confirmed McCarrick's removal from the priesthood, after a guilty finding by the Vatican's Congregation for the Doctrine of the Faith, in February 2019.

George Weigel, a biographer of John Paul II, responded to the release of the Vatican's report on McCarrick's career by saying that the late pontiff, now a saint, had been "fooled" by McCarrick's denials of his abusive behavior.

Although John Paul was certainly deceived, the Vatican's executive summary to the report suggests the pontiff was something of a partner in the deception — deaf to the advice of his counselors against making the appointment because of his experience in Poland, where authorities would sometimes level false accusations against bishops in order to try and damage the church's reputation.

The turning point of the deception was a handwritten Aug. 6, 2000 letter given by McCarrick to then-Bishop Stanislaw Dziwisz, John Paul's long-time personal secretary. In that letter, McCarrick promised Dziwisz, now the retired cardinal archbishop of Krakow, Poland, that he had "never had sexual relations with any person, male or female." 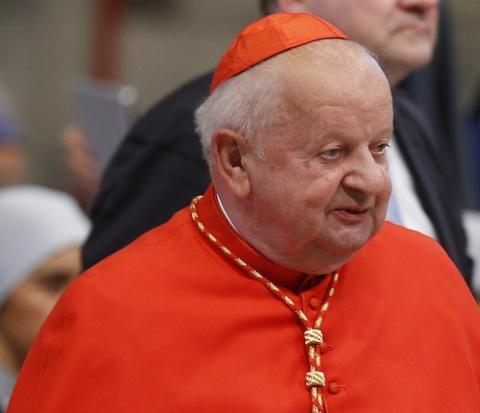 The Vatican report notes: "Pope John Paul II became 'convinced of the truth' of McCarrick’s denial contained in the letter to Bishop Dziwisz, a fact that [now] Cardinal Re noted in subsequent correspondence in late 2005 and recalled in interviews conducted in 2019 and 2020."

A month after receiving McCarrick's letter, John Paul met with Cardinal Angelo Sodano, then serving as the Vatican's powerful secretary of state, on Sept. 11, 2000.

According to a memo Sodano wrote after that meeting, which the cardinal had the pope sign in confirmation of his orders, Sodano was instructed to tell the Congregation for Bishops to add McCarrick's name to the list of candidates for Washington, from which McCarrick had originally been excluded.

The Vatican report also reveals that on Sept. 22, the Congregation for the Doctrine of the Faith waived the normal requirement for a brief check of McCarrick's adherence to Catholic doctrine before being considered for the appointment. (The congregation would normally be expected to release a nulla osta, or "no objection," letter.)

The report does not say who ordered the waiver, but one unnamed doctrinal official is quoted: "It was the first time since working in the Congregation that we would not ask for the nulla osta, particularly if the bishop candidates were to be presented directly in Audience to the Holy Father."

On Oct. 11, Re, now the prefect for the Vatican's Congregation for Bishops, formally wrote to John Paul to present the terna, or list of possible candidates, for the Washington post.

Highlighting McCarrick, Re wrote that "he has an extraordinary capacity for work, a ready and lively intelligence, good character, solid priestly spirit and full doctrinal reliability."

"The letter he wrote last August 6 assures that the rumors about his morality are completely without foundation," stated Re.

John Paul formally made the appointment in an Oct. 14 meeting with Re.

"The Pope dated and initialed the document in his own hand: '14.X.2000 JPII,' " states the Vatican report. "Below the Pope’s initials, Prefect Re handwrote: 'The Holy Father nominates as Archbishop of Washington H.E. Msgr. Theodore McCarrick, transferring him from the see of Newark.' " 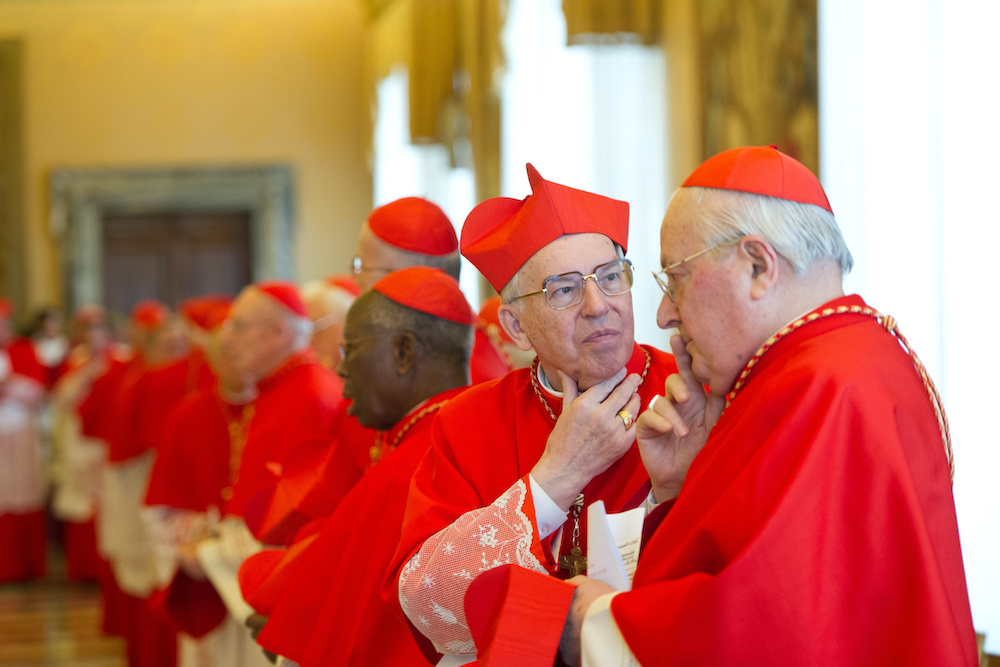 Cardinals Giovanni Battista Re and Angelo Sodano talk after Pope Benedict XVI announced his resignation in Latin during a meeting of cardinals at the Vatican, Feb. 11, 2013. (CNS/L'Osservatore Romano)

'It remains a mystery'

There is a jarring coda to the drama surrounding John Paul's decision to appoint McCarrick to Washington a bit later in the Vatican's report.

In April or May 2008, American psychotherapist Richard Sipe published an open letter to Pope Benedict XVI reporting rumors that McCarrick had "slept" with seminarians. Sipe said he knew of four priests who had had such encounters with McCarrick and suggested Benedict could ask the doctrinal congregation to investigate the matter.

In response to Sipe's claims, Re wrote a note to Archbishop Pietro Sambi, who had replaced Montalvo as the Vatican's ambassador to the U.S., querying him for information about the rumors.

Sambi responded on May 31, 2008. His language was rather pointed, especially for a diplomat.

"For this Nunciature it remains a mystery how it is that Card. McCarrick was appointed to Washington: he was in 16th place in the order of preferences; he wasn’t part of the terna of candidates," wrote the ambassador.

"One can ignore the advice of informants and of the Nuncio, but then one has to take responsibility before God and His Church," Sambi said.