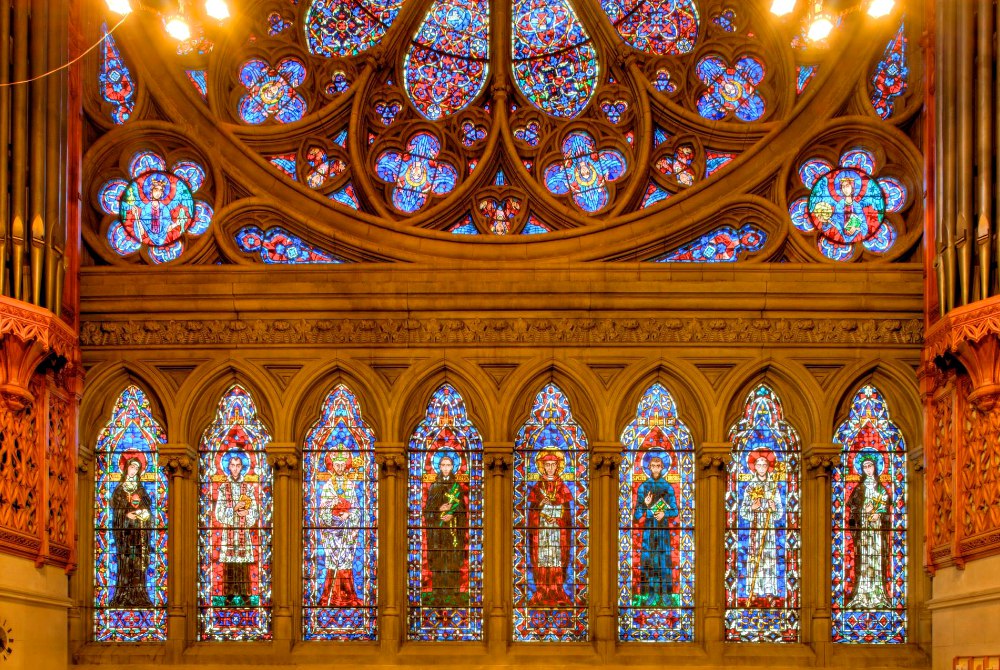 Stained glass windows are seen in the interior of the Cathedral Basilica of the Sacred Heart in Newark, New Jersey. (Wikimedia Commons/Bestbudbrian)

While some reacted with shock to a report released Nov. 10 by the Vatican detailing how church officials ignored former Cardinal Theodore McCarrick's long history of sexual abuse, one group was not surprised.

Those who went through seminary for the Archdiocese of Newark, New Jersey, during McCarrick's tenure as archbishop from 1986 to 2000 already knew the story, with the Vatican report a kind of "imprimatur" validating their experiences.

Bob Hoatson remembers that as summer weekends approached, "Uncle Ted," as McCarrick called himself, would send out invitations to a select crew of students. They would number just beyond the number of beds available at McCarrick's New Jersey beach house. McCarrick, according to the report, would then invite a seminarian to share a bed with him.

"Everybody knew about McCarrick, about Uncle Ted and the 'nephews' he had," Hoatson told NCR.

Those selected for the beach house trips knew, said Hoatson, "you had to go," or they would fear repercussions with the archbishop, who had ultimate authority over their future careers as priests.

Hoatson, then in his 40s, was never invited, he surmises because of his relatively advanced age. But before starting ordination studies for Newark, he asked if the archbishop was still sleeping with seminarians, and was assured by an archdiocesan official that the practice had stopped, even as the invites to the beach house continued. Hoatson had heard of McCarrick's reputation while he worked as a teacher in New York's Harlem as a Christian Brother.

Hoatson eventually left the priesthood and now devotes his time to a foundation devoted to sex abuse recovery. He is also a regular protester about the church's sex abuse policies and describes himself as a longtime whistleblower on sex abuse concerns.

Other former priests for the Newark Archdiocese said that McCarrick's proclivities were an open secret. (NCR requested an interview with a current priest in the archdiocese but was told by an archdiocesan spokesperson via an email that pending litigation prevented that).

Michael Reading, a former priest of the archdiocese, now lives in Seattle and said he is described in the report as having been groped on the beach by McCarrick during an outing at the New Jersey Shore.

The incident, recounted on Page 446 of the report, indicated that McCarrick reached into Reading's bathing suit during a beach outing. It went unreported at the time.

"I didn't say anything about it. But what can you do when you are being ordained in two months?" he told NCR. He said he was at the time "dumbfounded" by the grope and said he made sure to create some distance from the archbishop as a result.

He remembered that his ordination class was told by McCarrick that for him to ordain them, he would have to get to know them.

"I wasn't going to participate in being one of his guys," an outlook that he said might have cost him in terms of assignments after ordination, said Reading. For example, while he asked for an assignment in one of the archdiocese's cities — he is a native of Elizabeth, New Jersey, and had served as a deacon in urban Newark — he was sent to a parish in the far reaches of the archdiocese. He was also an assistant director at the archdiocese Propagation of the Faith Office, but when he was ready to take over as director when the longtime priest who headed that office retired, he was replaced.

Ed Bognacki, a former priest of the Newark Archdiocese, told NCR that there were few surprises in the report on the disgraced former cardinal. 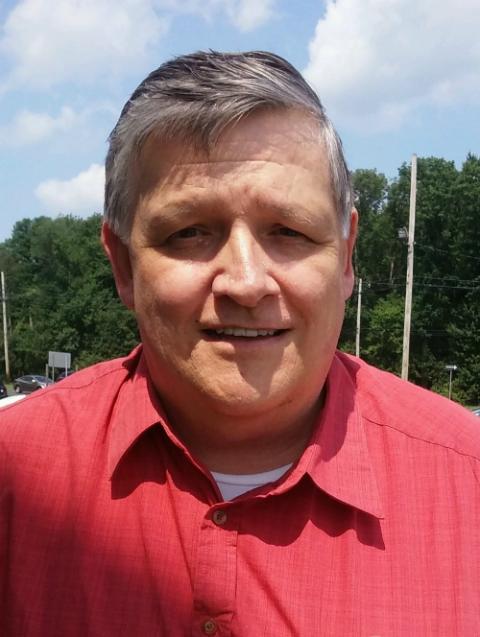 "It was widespread, well-known. Some of the bishops made it sound like nothing went on," he said about the documents from the New Jersey bishops in the report evaluating McCarrick's fitness to be made archbishop of Washington, D.C.

Many priests in the archdiocese knew about the beach house, where McCarrick would bed down with seminarians. They also knew about the regular visits of "nephews" (McCarrick is an only child but referred to sons of families he befriended as "nephews") who regularly went to the then-archbishop's residence in Newark.

Bognacki now works as a substance abuse counselor in New Jersey. He said he left the priesthood because he could not accept church teaching on homosexuality.

The documents from the New Jersey bishops referenced in the Vatican's McCarrick report expressed, at most, suspicion that the disgraced former cardinal was guilty of sexual transgressions. But many priests in the Newark Archdiocese had a clearer view.

"We used to joke about 'nephews,' " said Bognacki. "Most of the seminarians knew exactly what he was referring to."

The four bishops whose reports are quoted extensively in the report about suspicions about McCarrick's behavior were James McHugh, Vincent Breen, Edward Hughes and John M. Smith. All are deceased.

Bognacki said he sensed fear in the responses of those bishops as outlined in the report.

Smith, who served as Newark auxiliary bishop 1988-91 and later headed the Diocese of Trenton, New Jersey, recounted living with McCarrick in Newark, when the archbishop was regularly visited by what Smith described as nephews. "I never thought there was anything improper or immoral in these visits," Smith is quoted as stating in a letter quoted in the report.

Smith also noted: "I must say that I would be completely shocked if any individual accused Archbishop McCarrick of immoral behavior" (Pages 155-57 of the report). 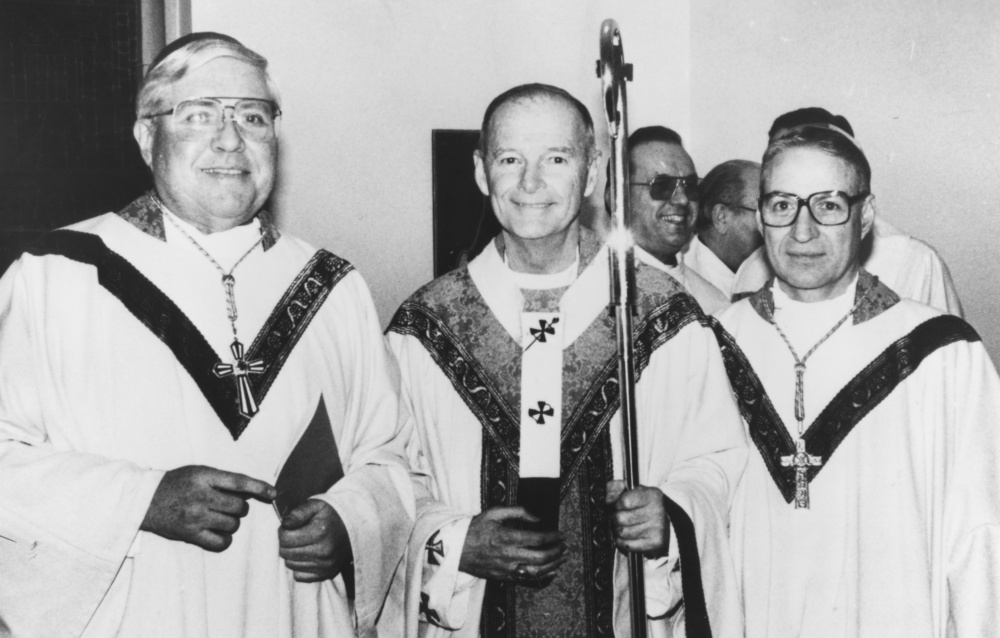 Bognacki said Smith "was either tremendously naive or there was something he didn't want to talk about." Many Newark clergy at the time knew all about McCarrick's issues, and regularly joked and commented about them, according to Bognacki.

The tone of documents written by the New Jersey bishops, he said, indicated that they feared McCarrick's power and influence in the Vatican and, although the letters were supposed to be confidential, knew that McCarrick would eventually find out about any negative statements contained in them.

Bognacki noted that much of the incriminating information in the report about cover-ups of McCarrick's behavior involves those who are deceased. There were other prominent clergy, he said, who he suspects also had to know about McCarrick's behavior and are still alive.

While the accounts of McCarrick's actions were no surprise, he said that the parceling of blame for his rise in the church in the report was.

"I was surprised so much landed in the lap of John Paul II," said Bognacki, who said responsibility for a lack of action on McCarrick's abuses went far and wide. 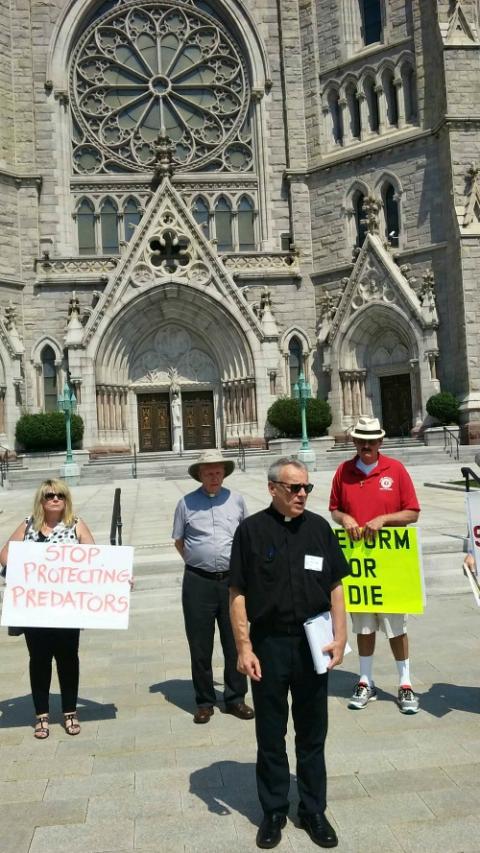 Fr. Desmond Rossi, a former Newark seminarian, has remained a priest, although he left the New Jersey archdiocese and was ordained for the Diocese of Albany, New York.

Rossi said that McCarrick once made a point of placing his hand on the-then seminarian's leg during an office conversation, an action he found uncomfortable. But for Rossi, the biggest concern was the tone McCarrick set in the Newark Archdiocese.

Rossi's claim that he was raped by two fellow seminarians was judged by an Archdiocesan Review Board as credible but unsubstantiated. He is still pursuing his case.

"By his own behavior, [McCarrick] set conditions that people could do what they wanted. He set the signal," Rossi said, noting that at the seminary at the time "there were a lot of winks and nods. The people who could have told the truth at that time failed us."

"It goes to show me how vulnerable we are" to people with power and authority over us, Rossi told NCR. "His whole life was power," he said of the former cardinal.

While the report accurately recounted events, it doesn't offer much of a pathway forward for the church, said Reading. One aspect is that since McCarrick's abuse often involved adult seminarians, it was not taken seriously by church authorities.

The report, he said, "emphasizes the abuse of power, and how it took so long for the church to take it seriously."

Rossi, for one, said the scathing report is a landmark advance in the church's struggles with sex abuse.

"Today, I feel proud of my church. I can't think of any other institution that has made themselves as vulnerable as the church has now. It gives us hope," he said.

Rossi takes some solace that while the report describes failures of church leaders, many of whom are deceased, "the main character is not dead. He is still alive. It is seen as a vindication of truth."

McCarrick has not publicly commented on the report.