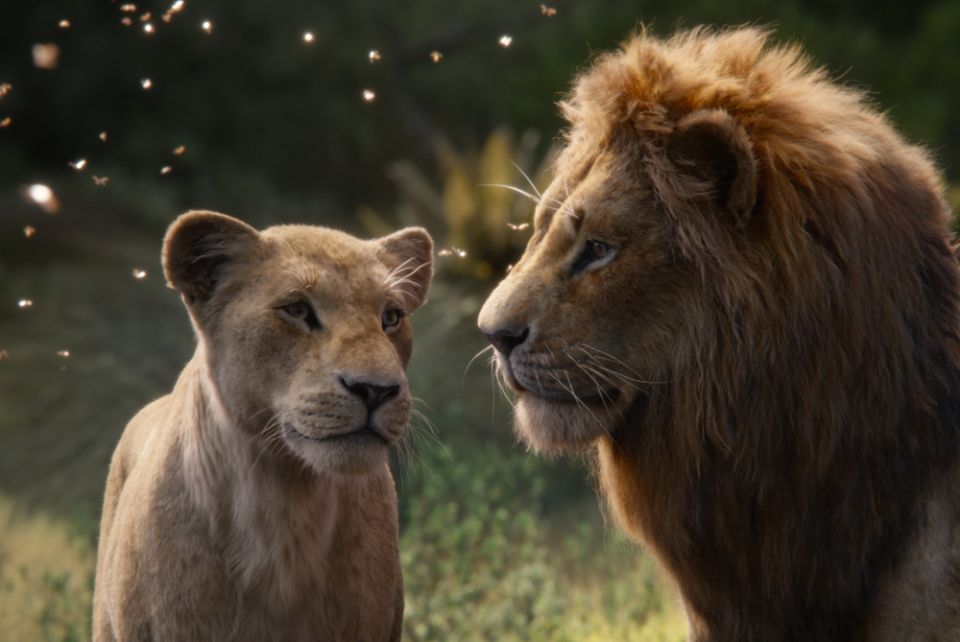 The characters Nala, voiced by Beyonce Knowles-Carter, and Simba, voiced by Donald Glover, appear in the movie "The Lion King." (CNS/Disney)

Many people above the age of five have seen Disney's 1994 original animated feature film, "The Lion King," or more recently, the Broadway musical. We know the story; we love the music. And now for the film's 25th anniversary, Disney is releasing a "live action" CGI, computer-generated imagery, version of the beloved classic, directed by Jon Favreau.

Favreau directed the 2016 remake of "The Jungle Book," fine-tuning the photorealism technology, he told journalists at the international press day July 11 in Beverly Hills, that made possible this visually stunning new version.

Just to recap, the story takes place in the Pride Lands of Africa where a new tiger cub prince is born, Simba (voiced by Donald Glover). His father, the king Mufasa (James Earl Jones), brings him out to meet the wise mandrill Rafiki (John Kani), who takes Simba from the embrace of his mother Sarabi (Alfri Woodard) and holds him high on the bluff of Pride Rock so that all the animals can pay homage.

Simba is playful and wants to wander with his friend Nala (Beyoncé Knowles-Carter). Sarabi sends Zazu (John Oliver), a red-billed hornbill to keep an eye on them. Mufasa tells Simba that all the land and animals he sees will be his kingdom to care for but warns the cub not to go to the wasted area in the darkness beyond. Mufasa teaches Simba about the circle of life and the interconnectedness of all creation.

However, Scar (Chiwetel Ejiofor), who lives apart with a pack of hyenas, is jealous of his older brother Mufasa and his nephew Simba. He refused to attend the initiation ceremony and wants to get rid of Mufasa and Simba so he can be king. He tells the young Simba that the forbidden place is just an old elephant burial ground that would be interesting to visit. Simba and Nala are curious and sneak away on their journey. When the two youngsters are attacked by Scar's henchmen hyenas, Mufasa rescues them.

Scar then lures Simba into a gorge and gets his hyenas to set off a stampede of wildebeest. Mufasa rescues Simba but is trampled to death. Scar shames Simba saying he is responsible for his father's death and that he should leave, never to return. The little cub runs off, scared, sorrowful and feeling guilty.

Simba collapses in the desert and is found by the meerkat Timon (Billy Eichner) and his buddy the wild boar Pumba (Seth Rogan). The two welcome Simba to their oasis and teach Simba to forget about the past and live for today, singing "Hakuna Matata" in Swahili, in other words "no worries."

The years pass and Simba grows into a 400-pound lion content with his friends at the oasis. But back at Pride Rock, things are going from bad to worse. Sarabi pleads with Scar to stop over hunting and depleting their resources. He wants her to be his queen, but she refuses. Nala, seeing how dire things are, goes for help. She thinks Simba is dead and is shocked to find him. She pleads for him to return, and at first, he refuses. Then Rafiki appears and assures him that his father lives on in him, that he is the king now and has responsibility to live out his destiny.

Even though I heard critics at the press conference say they didn't think the film was that great, they were willing enough to take the swag Disney offered — a large plush stuffed Simba and a toy from the character collection of our choice (I got Scar for one of our self-identified grumpy nuns; she was very grateful). They also gave us a bag with an activity packet "created in partnership with Disney's animals, science and environment." Included was information about the Lion Recovery Fund (in partnership with the Leonardo DiCaprio Foundation), and ways people can help the lion population in Africa. The leaflet says that in the last 25 years, half of Africa's lion population is gone from loss of habitat, human-lion conflict, and loss of prey and lions to "illegal bushmeat snarling." Lions now number only about 20,000.

I beg to differ with my colleagues' lackluster opinion of the film because the "photorealism" illusion of live action is gorgeous. It immerses the audience into the CGI reality of the Pride Lands. When "The Circle of Life," sung by many members of the Broadway musical cast, booms out at the beginning of the film it goes right to the heart. The story is basically the same, though the three hyenas are not so funny; they are dangerous. They add another layer of darkness the original animated feature does not have. Other small details have changed but the only one that bothered me was Rafiki's staff. It shows up later and is used to fight off attackers. I liked its use as the staff of a wiseman or shaman in the original film.

I never once looked at my watch during the almost two-hour film. This is so rare for me because so few films can hold my attention for that long. I looked at the close-ups of the bugs with great interest. The images are true to animal anatomy but avoid all private parts; indeed the cub Simba seems visually gender neutral. I scrutinized the faces of the animals that remained true to their animal nature and did show not emotion. The emotional temperature of the film, then, has to be set differently and here it is with the drama, music and the voices of the characters. With animation you can do anything but not with life-like animals. And whenever you get into anthropomorphism, giving animals human qualities, you have to suspend your expectations and your disbelief. I found it hard to believe the critics were not willing to do this.

The animals were voiced very well, though James Earl Jones' Mufasa seems less robust and shows signs of king fatigue. Billy Eichner and Seth Rogan are the comic relief. As for the music, the same songs are in the film as in the original. Except for "The Circle of Life," most of the songs are shortened, and less vigorous, at least to my ears. I wonder if this is because preference in this film is given to the beauty and wonder of the visuals.

At the press conference, we were told that the filmmakers wanted to remain faithful to the original and the musical. I think this was too complex a goal, and this may be what the critics sensed about the film. As with the 1993 film, Hans Zimmer scored this version. He was present and obviously moved to be part of this huge production.

Thematically, I think catechists and religious educators will be able to talk about baptism and confirmation, sacraments of initiation. For unchurched parents who come to sacramental preparation classes, seeing "The Lion King" might give them an entrée into what baptism is about. There are also themes of preservation of wild animals, lions in particular, as well as the environment. Character education, so lacking in our age, is going on throughout the film. The female characters hold their own, even though Whoopi Goldberg's original Shenzi, leader of the hyena pack, is now voiced by Florence Kasumba, and has lost her sense of humor.

Disney is an entertainment corporation with huge financial interests and profit goals. "The Lion King" is a cash cow for sure. But if you are going to go to the cineplex, why not take in a film that is engrossing, beautiful to look at, wondrous to listen to, and, at the end of the day, inspiring? You could wait for the DVD or small screen, but I think you'd lose the ineffable sense of the vastness of Africa and creation that the big screen and surround sound gives.

Leave comparisons at home and enjoy 2019's "The Lion King" for what it is: a work of art.