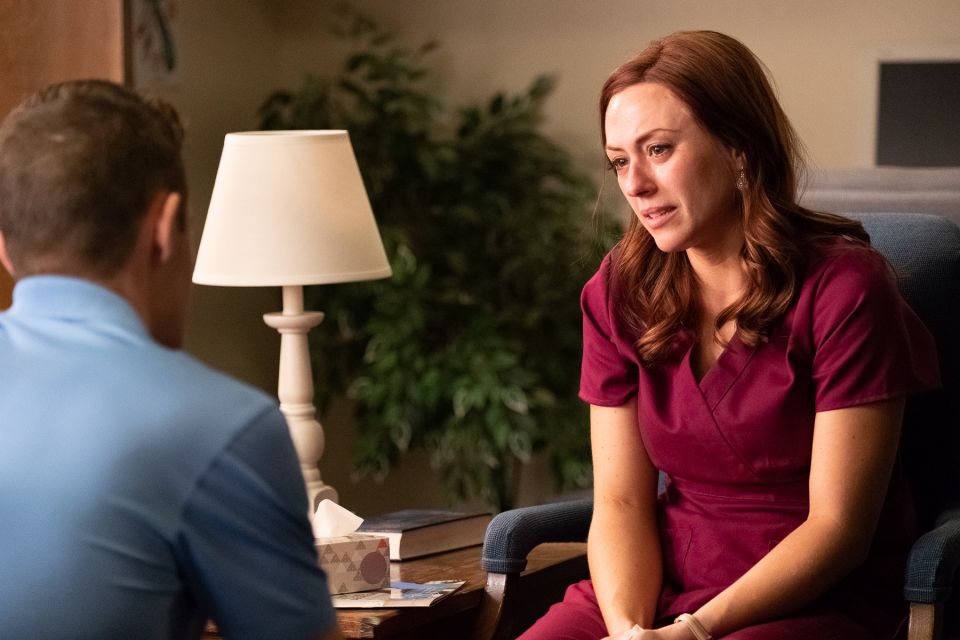 "Unplanned" is a new film from Chuck Konzelman and Cary Solomon, both known for the Evangelical paranoia, audience-bait trilogy "God's Not Dead." They have teamed up again for a true-life story. This time it actually works as a feature film, though I wouldn't call it exactly entertaining.*

"Unplanned" is the story of Abby Johnson, a former volunteer, then clinic director at Planned Parenthood in Bryan, Texas. It is based on her best-selling 2014 memoir titled Unplanned: The Dramatic True Story of a Former Planned Parenthood Leader's Eye-Opening Journey Across the Life Line.

In 2001, Texas A&M University junior Johnson (Ashley Bratcher) stops at the Planned Parenthood booth at a volunteer fair. After chatting with the young woman tending the table, Abby signs up to assist clients at Planned Parenthood.

Abby had an abortion as a freshman. When she told her older boyfriend Mark (Alexander Kane) she was pregnant, he told her she could get an abortion. He knew a place in Houston because he had taken another girlfriend there. Abby struggled with her decision because of her Christian upbringing and worried about what her parents would think. But she went through with it and about a year later she married Mark. The marriage did not last and just after filing for divorce, Abby discovered she was pregnant again and had another abortion.

Now, as she walks away from the volunteer fair, she tells herself that having the second abortion or "getting rid of the pregnancy" was better for everyone. She validates her decision to volunteer for Planned Parenthood because she wants "to keep abortion safe and rare." This becomes her self-consoling mantra over the next few years whenever her conscience or a loved one questions her work.

Abby's assignment is to escort young women from their cars to the front door to avoid being hassled by anti-abortion protestors on the sidewalk. But some protestors, from the Coalition for Life, take a different approach. Shawn (Jared Lotz) and Marilisa (Emma Elle Roberts) become friends with Abby. Marilisa and Abby bond over shoes and she appreciates Shawn's gentle manner.

Abby volunteers for the next six years and is respected by everyone at the Planned Parenthood facility. When Cheryl (Robia Scott), the director of the Bryan Planned Parenthood location, is promoted to the main office in Houston, she hires Abby to take her place. Abby works in the front office for two years as a counselor, instructor and manager. She obviously enjoys her work.

She is now happily married to Doug (Brooks Ryan) and the staff at Planned Parenthood throws her a baby shower when she becomes pregnant. Abby is great at her job as the director of this non-profit organization that she believes helps women by making abortions safe and earns a significant award as employee of the year.

At a large meeting for managers of Planned Parenthood facilities, Cheryl says that the staff must increase income by raising their abortion quotas. Abby is very surprised by Cheryl's directive. Puzzled, she stands and asks why this is necessary when Planned Parenthood is a non-profit organization. Cheryl tells her that "Non-profit is a tax status, not a business status. Revenue per patient must increase." Abby is shocked when the Planned Parenthood management issues an official reprimand for her file because she questioned the designated authority person in an open meeting.

Abby returns to work wounded by her experience. In September 2009, Abby is asked to help out with an ultrasound-guided abortion because the staff is shorthanded. In her now eight years at Planned Parenthood, Abby had never actually seen an abortion performed. An ultrasound-guided abortion is rare for their facility, but the visiting doctor insists. As Abby guides the ultrasound wand over the woman's uterus during the procedure, she watches as the tiny unborn baby, 13 weeks into its development, struggles as it is finally suctioned out in pieces. After her own two abortions and supervising over 22,000 abortions, actually seeing one via ultrasound makes her ill and she has to flee the room.

This scene actually happens in the opening minutes of the film and though we know it is created by CGI, it is very graphic. Abby's years of denial, of placating her conscience by telling herself she is helping women by making sure abortions are rare and safe and that the baby feels nothing, are over. She had believed the lies of the largest abortion provider in the country.

Abby quietly quits. She literally walks away. When Planned Parenthood realizes this, it takes Abby to court to obtain a gag order, afraid she will go public. Because she and her husband do not have money, she hires a contingency lawyer (Kaiser Johnson) whose billboards promise to get clients "what they deserve."

Know that this is a low-budget film with non-union actors. The two performances that stand out, however, are Bratcher as Abby and Johnson as the cheesy lawyer, Jeff, who provides some much-needed comic relief at the end. Unfortunately, Scott as Cheryl, while very much like the actual character according to the film's publicists, is a simplistic one-dimensional stereotypical plot foil on the screen. More nuanced writing and character development would have made the story even more powerful.

"Unplanned" is an important film, a designation that directors hate to hear. It is not entertaining (until the cheesy lawyer shows up) but tells an emotional story with wide-ranging implications. It may entice anti-abortion extremists to employ even more explicitly graphic images to try and scare women out of abortions.

The film may also have an effect on women who have had abortions, so resources for post-abortion healing are listed at the end of the film. But Johnson's story goes straight to abortion industry workers, implicitly inviting them to look at what they are doing and to change the course of their lives. At a pre-release screening, some of us asked that information for pregnant women in crisis also be listed and it is now included.

"Unplanned" was made in secret under a different title because the subject is controversial, and the filmmakers wanted to protect the film from any pre-release opposition. So far, Planned Parenthood has not tried to block the release of the film nor did it challenge Johnson's memoir on which the film is closely based.

The film is rated "R" because of the flowing blood in the abortion sequence, which I think is entirely appropriate. "Unplanned" opens nationwide in select theatres March 29.

*This sentence has been updated to clarify the author's intent when describing the movie.

Culture | 'Unplanned' is important, but not exactly entertaining