'A Wrinkle in Time' has powerful themes, but still underwhelms 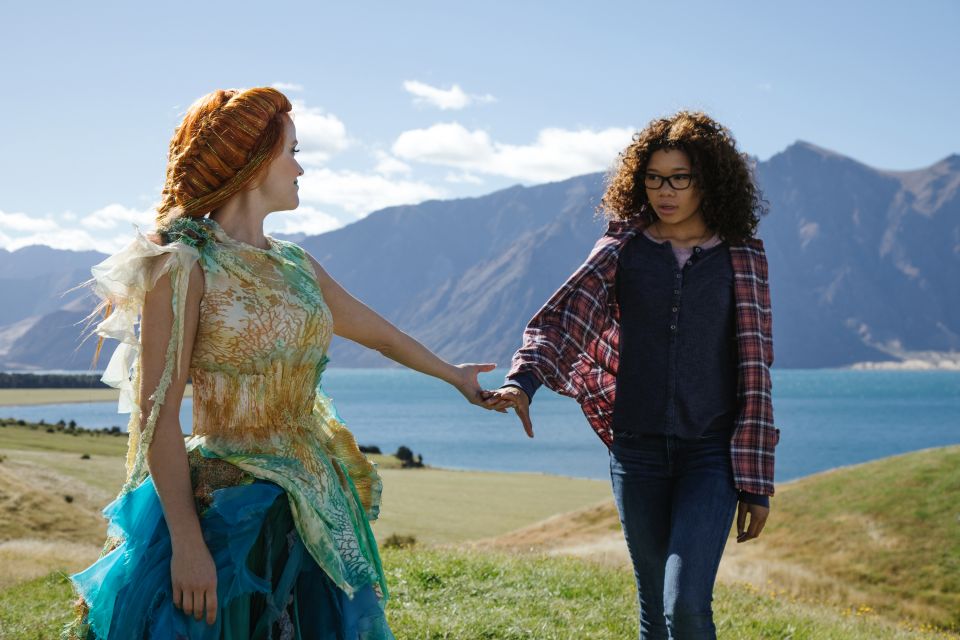 Reese Witherspoon and Storm Reid star in a scene from the movie "A Wrinkle in Time." (CNS photo/Disney)

If you take the long view of Disney's latest film "A Wrinkle in Time" (based on Madeleine L'Engle's 1962 novel), it's a good enough movie for kids maybe 10 and older to see.

They might focus more on the interaction among the three main characters, 13 year-old Meg (Storm Reid), her 6 year-old, adopted brother, Charles Wallace (Deric McCabe), and Meg's crush, Calvin (Levi Miller), and see in the adventure grace and love that transcends anything mean girls, missing or cruel dads, and the dark side of the universe can throw at you. Or so the films' trio of Wizard of Oz-like, mystical creatures, Mrs. Which (Oprah Winfrey), Mrs. Whatsit (Reese Witherspoon), and Mrs. Who (Mindy Kaling), tell us in perfunctory bromides from Gandhi and Rumi. They keep telling Meg to be a warrior, so she becomes one.

Perhaps the kids in the audience will skip or forgive the poor quality of the messy postproduction work on Witherspoon's eyes that we are gifted to see repeatedly in close-ups, the uneven script, and the even more uneven sound mixing that left the otherwise amazing Charles Wallace's dialogue mostly unintelligible.

Some of the scenery is stunningly beautiful, but the immensity of the universe was missing. Many of the images were too obviously computer-generated. I don't blame the wonderful director Ava DuVernay's direction of the film (she who gave us "Selma"). It feels like Disney took a look at what they had and cut the budget midway, figuring the beloved novel would sell the tickets. Maybe it will. But I don't foresee moviegoers' seeing it a second time. If I were a Disney executive, this film would embarrass me. Or maybe this is one of those fantasy stories that need to stay the way you first imagined it in your head.

"A Wrinkle in Time" tells the story of scientists Dr. Alex Murry (Chris Pine), who is white, and his wife, Dr. Kate Murry (Gugu Mbatha-Raw), who is black, and their two children, Meg and Charles Wallace (who is always referred to by his first and middle names). Alex is fixated on studying the universe and believes that through a mental process called "tesseract" a person can travel through time and space without a space ship. One night he disappears.

Four years later, Meg is not doing well in school and is being bullied by her classmates. Charles Wallace is a prodigy and watches out for his big sister. Both children and their mother miss Alex very much. After Meg hits a girl who said mean things on the fourth anniversary of his disappearance, Mrs. Whatsit shows up on a dark and stormy night as Meg and Charles Wallace are up late in the kitchen. The boy is not afraid, but Meg doesn't trust the weird, ethereal (and just a little ditsy) woman who claims to know where their father is.

The encounter starts a long journey through time and space to search for Alex. The adventure includes Calvin, who has his own issues and a crush on Meg. The three Mrses are like guardian angels, but they can only take the children so far. In time, they must discover their own resources to combat the "It," the dark, evil energy force that has taken Alex.

The film highlights relevant and important themes such as forgiveness, love for family, self-confidence, and the belief that love is what operates the universe and transcends all the bad stuff. There's not much emotion in the film except for the very end.

The racial diversity of the cast and the dominance of female characters make it seem like Disney has been listening to what audiences want. The acting by the kids and Mbatha-Raw was good, as was Zack Galifianakis, who deserved more screen time as the “Happy Medium.” The film could have been less cheesy, particularly the Mrses costumes, despite some scenes that were gorgeous: the floating flowers and the transformation of Mrs. Whatsit into a flying green goddess who transports the children from one “space” to another.

I saw some connections to St. Hildegard of Bingen's writings on the energy of created things and even Teilhard de Chardin's idea of the unfolding of the cosmos, which probably influenced L'Engle herself.

Nevertheless, "A Wrinkle in Time" could have been so much more.

Culture | 'A Wrinkle in Time' has powerful themes, but still underwhelms

At Cannes, Wim Wenders talks about making movies that matter