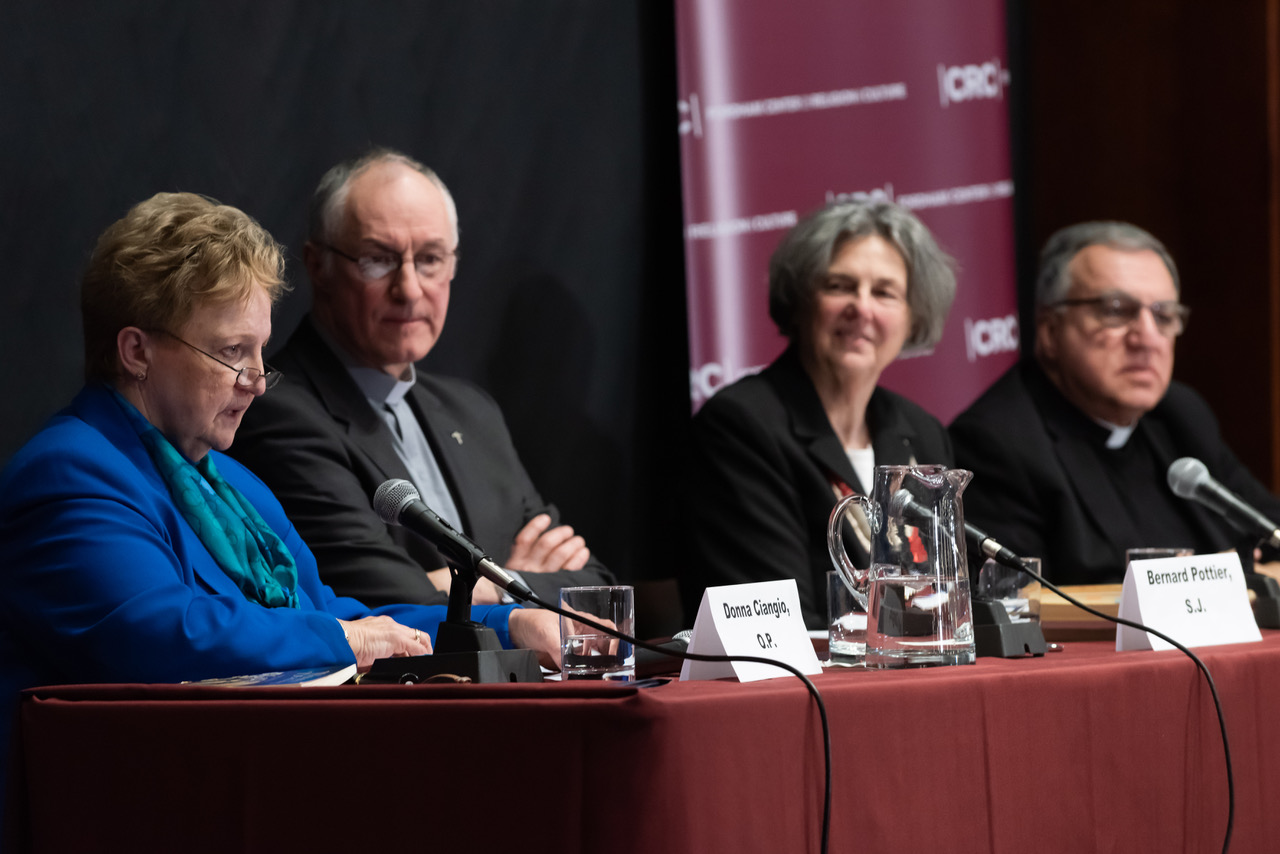 A study he commissioned on the possibility of ordaining women deacons is complete and now on the desk of Pope Francis.

Phyllis Zagano and Jesuit Fr. Bernard Pottier, two members of that commission, told a packed auditorium at Fordham University's Lincoln Center campus here that the evidence indicates women deacons have a long history in the church and that they are needed in ministry worldwide.

"History alone is not dispositive. It can't answer the question one way or another," said Zagano, author of numerous books and articles on the topic of women deacons and senior research associate at Hofstra University in Hempstead, New York. But, she said, the ministry need is there.

Zagano, an NCR columnist, has long studied the diaconate in the ancient church and is involved in current discussions. "I would like to think of women's deacon future. But I have no promises for you," she told the audience of more than 300 at the seminar sponsored by the Fordham Center on Religion and Culture.

The commission, founded two years ago and led by Cardinal Luis Ladaria, is a Vatican first. Comprised of 12 members, it includes an equal number of men and women. Their task was to study the history of the diaconate of women.

"We are better, men and women coming together," said Pottier, a permanent member of the Vatican's International Theological Commission, making the point that the commission modeled what a mixed-gender clergy could accomplish.

The permanent diaconate was reinstituted in the church after Vatican II. There are currently 45,000 permanent deacons in the world, men who serve in various ministries and can preach and witness marriages and perform baptisms, among other duties. They include both married and single men, with some 18,000 serving in the United States.

Transitional deacons have long served in similar ministerial roles as a stepping-stone to priestly ordination.

Zagano spent months over the two-year span at the Vatican researching the topic and participating in discussions. She said that cardinals and bishops she met from all over the world, even in places such as Asia, Africa and Latin America, where there are few deacons, were supportive of the diaconate and opening ordination to it for women.

One Latin American archdiocese has 400 priests to minister to more than five million Catholics. In one Venezuelan parish, 14 different chapels are served by two priests. The need for ordained ministers is great, said Zagano.

"Our moral obligation is to bring the Gospel to the people of the world," she said.

Much of the discussion here focused on the long history of women deacons, which dates to St. Paul's reference to Phoebe, a woman who served as a deacon. The tradition of women deacons continued through church history, being suppressed in the church in the West as the rites of ordination became perceived as closely connected to the all-male priesthood.

Pope Benedict XVI emphasized, however, the different vocation of priesthood and diaconate. That distinction has emboldened supporters of ordaining women deacons because it separates the issue from the ordination of women, which was categorically ruled out by Pope John Paul II.

Dominican Sr. Donna Ciangio, chancellor for the Archdiocese of Newark, said that people in the pews are ready to ordain women. Some even assume that active women ministers in their parishes are already ordained deacons and want to hear women preach, a ministry that is open to deacons, she said.

The panel emphasized that they were discussing women deacons, not women priests. Audience member Karen Gargamelli-McCreight pressed the panel on women's ordination to the priesthood but was rebuffed and told that was a topic not on the evening's agenda.

"It has nothing to do with what we are doing tonight," said Zagano.

Zagano said she has confidence that the pope would make the right decision about ordaining women deacons, keeping in mind the ministry needs of the church.

She cited Francis' plea for people to make noise about issues in the church that concern them. "He is a man of deep prayer," she said. "This guy is for real."

A version of this story appeared in the Feb 8-21, 2019 print issue under the headline: ‘No promises’ on women deacons.