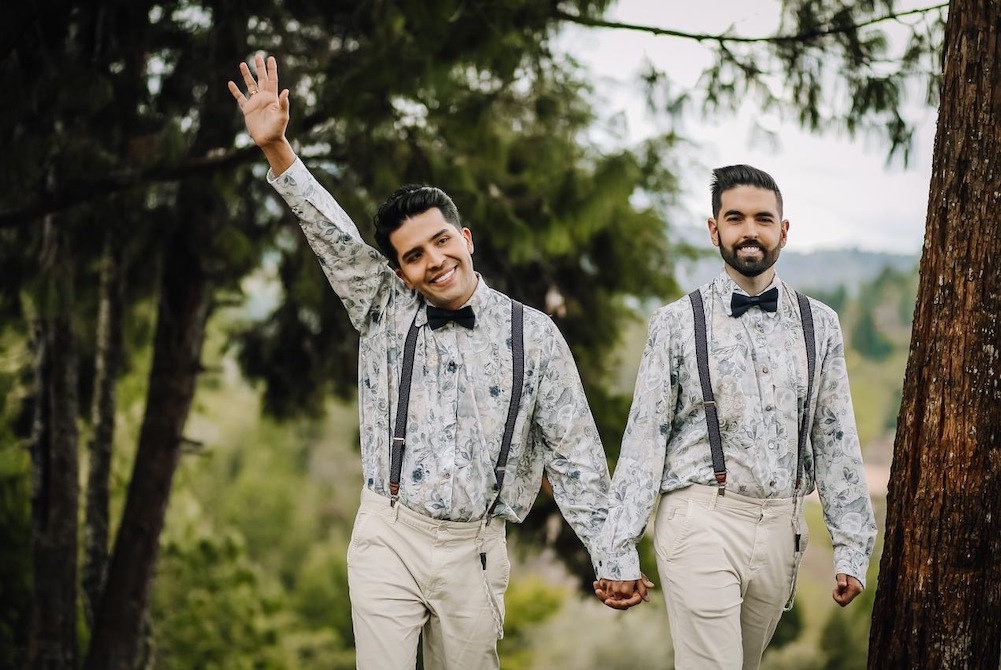 Sebastián Pascuas, left, and Santiago Botero walk holding hands on their wedding day in November 2020. Botero and Pascuas, who regularly attend daily Mass together, said having a Catholic priest at their wedding in November 2020 was very meaningful — both to bless their union and to consecrate the Eucharist so that they could share Communion together as newlyweds with their loved ones. (Juan Arango)

On a warm October day in 1998, Dan McNeil and Patrick Canavan walked down the aisle with their families at a church in Washington, D.C., singing "Lover of Us All."

In the eyes of God and their loved ones, they committed their lives to one another and promised to "make our home a place of love and welcome," Canavan said.

For McNeil and Canavan, both deeply faithful men who had met at a retreat for gay and lesbian Catholics, being married in a Catholic rite was vital.

A friend of theirs — a Catholic priest affiliated with the Washington chapter of Dignity, a Catholic LGBTQ advocacy organization — officiated and blessed their union in an Episcopal church.

Having the priest there to recognize the sacramentality of their marriage was important, McNeil said. But marriage is the one sacrament conferred by the two people "standing before God" with the priest as a witness, he said.

"A friend of mine today said, 'Don't forget that the Vatican doesn't get to decide who God blesses,'" Canavan said. "And that's true — God gets to decide. And we will take a chance on God."*

Responding to a March 15 Vatican decree banning priests from blessing gay unions on the premise that God "cannot bless sin," McNeil, Canavan and other LGBTQ Catholic couples and advocates told NCR the Vatican is out of touch with the reality that LGBTQ Catholics find and mirror God's love in their relationships.

"[The Vatican decree] is insulting," McNeil said. "If there's ever a place where I experience God, it's in the midst of our commitment to each other, our care for each other, our relationship."

Jesuit Fr. Jim McDermott, who is gay, said it's not uncommon for priests to be asked to bless the weddings of LGBTQ couples. He said being invited as a guest to his LGBTQ friends' weddings has been an honor for him.

"When I've been asked to attend a wedding of two men or two women, I've always been very happy to be able to be invited to those experiences and very proud of those people for the commitment of their lives they've made," McDermott said. "The people that I know that are queer and married are incredibly inspiring people who have helped me on my journey as a priest and as a gay man."

Santiago Botero, who lives in Colombia, said meeting his now-husband Sebastián Pascuas was the answer to his prayers for a stable partner who shared his love for Jesus after a difficult journey of accepting his identity.

Botero and Pascuas, who regularly attend daily Mass together, said having a Catholic priest at their wedding in November 2020 was very meaningful — both to bless their union and to consecrate the Eucharist so that they could share Communion together as newlyweds with their loved ones.

"For us as Catholics, we know that Christ is there [in the Eucharist], so for us … it was important to have a priest celebrate the Eucharist," Pascuas said in an interview in Spanish.

Pascuas and Botero said their small, outdoor wedding was planned during a time of year when it often rains in Colombia. In the days leading up to the wedding, they prayed for the rain to stop.

"It was miraculous, because every day it rained — every day it rained — and that Sunday, it didn't rain. ... The sky was gorgeous," Pascuas said. "With God's help, [our wedding] was a beautiful moment. In the end, we saw it as a promise between ourselves and God to love each other and be faithful to that love forever."

Pascuas said he wasn't surprised about the Vatican's announcement on blessings for gay unions. The church won't change overnight, he said. But there are lots of LGBTQ Catholic couples who long to have the church recognize and honor their relationships, he said.

Yunuen Trujillo, an immigration attorney and lay leader in LGBTQ ministry who runs the Instagram page @LGBTCatholics, said the Vatican statement — particularly the line that says God "cannot bless sin" — felt very out of touch with the experiences of actual LGBTQ Catholics.

Trujillo, who is queer, isn't married but said she believes her vocation is to be in a committed relationship one day.

"We allow for blessings of inanimate objects," she said. "To know that an inanimate object could be perceived as having more value than a committed loving relationship between two adults. … It just sounds really wrong to me."

Botero said the Vatican statement confused him because he sees Pope Francis as someone who wants to "embrace everyone." 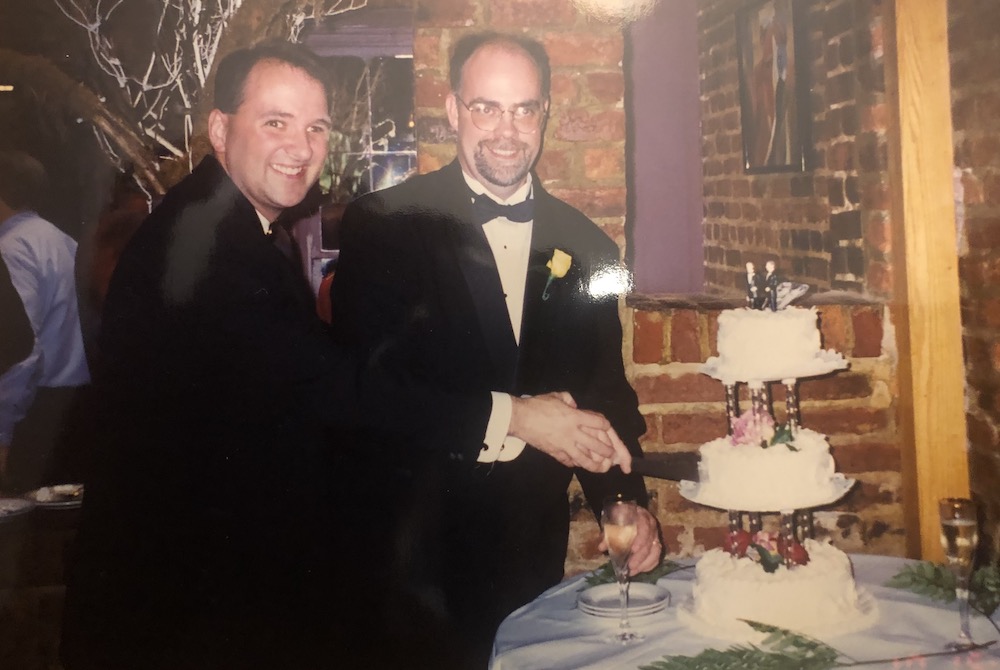 Dan McNeil, left, and Patrick Canavan hold hands and prepare to cut their wedding cake at the reception following their holy union ceremony in October 1998. They were legally wed at San Francisco City Hall in August 2008. (Courtesy of Patrick Canavan and Dan McNeil)

Rev. Kori Pacyniak, a pastor at Mary Magdalene Catholic Community, an independent parish in San Diego, said the news about the Vatican statement was "disappointing to hear." Over the past few years, Francis' efforts to reach out have raised LGBTQ people's hopes about greater inclusion in the church, they said, at the same time that the church retains language that says queer relationships are "intrinsically disordered."

"I think for many people, this kind of a statement, couching the language that casts same gender relationships as sin, that the church does not have the authority to bless sin, is pretty much a slap in the face," Pacyniak said.

McDermott said he found the statement "painful and confusing" and said he believes the church's stance is not in line with the lived experiences of LGBTQ Catholics.

He said it was significant that the statement said the church could bless LGBTQ individuals, but that this is "cold comfort" for queer Catholics considering the message's statement that "God does not bless sin."

Trujillo said among the LGBTQ people she knows, she's seen three main responses to the Vatican statement. Some people, she said, already have a strained relationship with the church because they've felt rejected for so long. This statement is only driving them further away, she said.

Gay Catholic couples want to be holy just like everyone else, Botero said, but so many have left the church because they feel rejected.

"Their reaction is, 'Oh, what else could I expect,' " Trujillo said.

Older gay Catholics who have persevered in the faith for decades despite discrimination and rejection tend to express feeling exhausted and disheartened that this statement is "more of the same," she said. And many younger Catholics simply don't listen to the Vatican, she said.

"What matters to them is Jesus, and Jesus' love," Trujillo said. "And [the Vatican] is not really relevant. Either they distance themselves from the church or they ignore what the church says."

McDermott said when the Catholic Church makes homophobic statements, it can challenge people's faith and legitimize prejudice, workplace discrimination and harassment of LGBTQ people, making their lives more difficult and even dangerous.

"When an official religious or spiritual organization, an organization that wants to be the voice and the hands of God, says things like this, it has serious, ongoing implications for people's lives beyond their ability to get married," he said.

*This article has been updated to clarify an attribution

A version of this story appeared in the April 2-15, 2021 print issue under the headline: Memo to the Vatican: Same-sex couples find God's love in marriage, too.