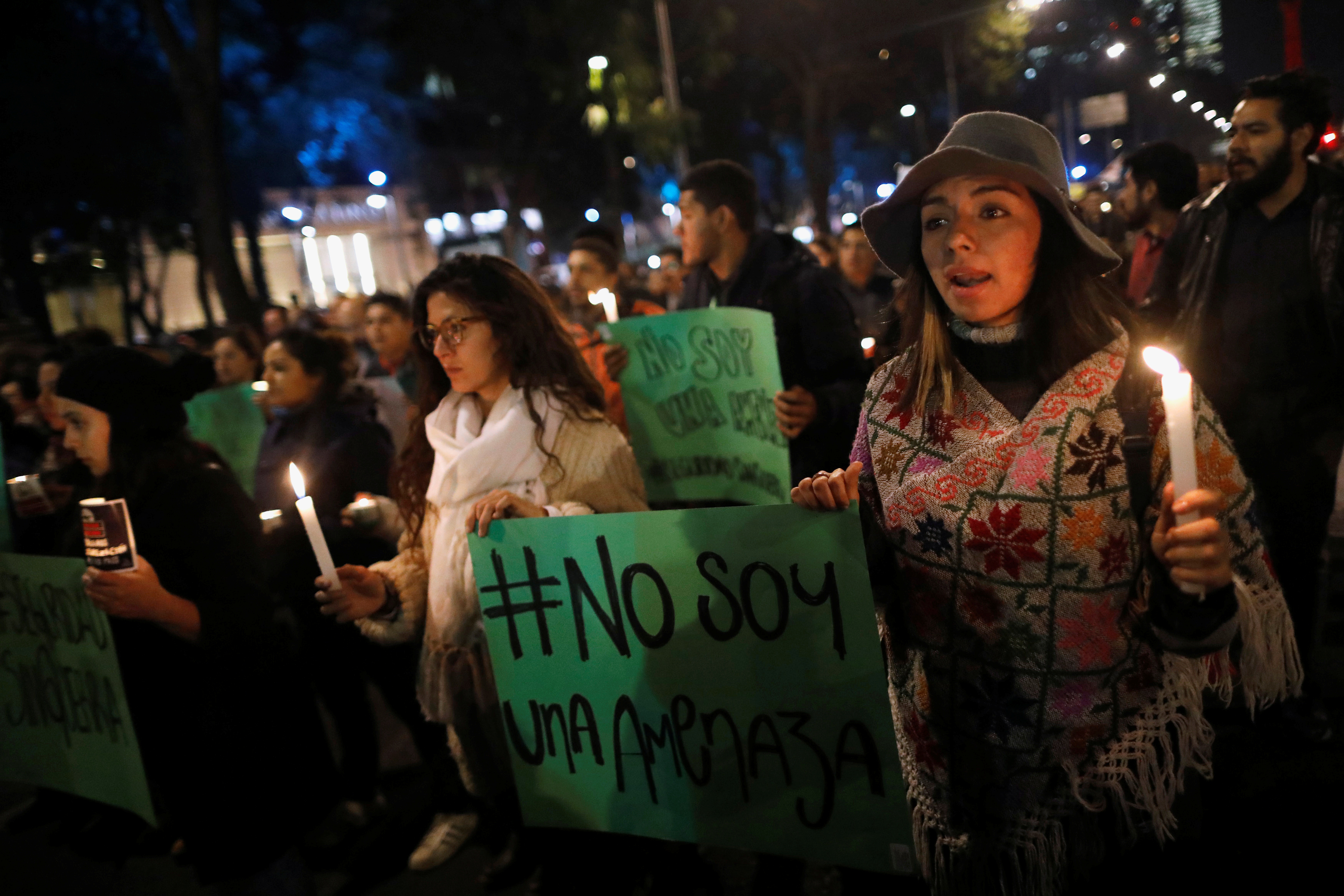 Activists hold candles during a Dec. 13 protest against the new Internal Security Law in Mexico City. Mexico's Senate approved the law Dec. 15 amid outcry from opponents and admonishments from national and international organizations. (CNS/Edgard Garrido, Reuters)

A new law deepening Mexico's dependence on soldiers for public security purposes has provoked alarm from some clergy and Catholic human rights organizations, who warn the use of the armed forces has failed to calm the country and new provisions could provide a pretense for cracking down on peaceful protests.

Mexico's Senate approved the Internal Security Law early Dec. 15 amid outcry from opponents and admonishments from organizations such as the National Human Rights Commission and the United Nations, along with warnings from Mexican activists that the new regime risks "militarizing" the country, lacks sufficient safeguards to prevent abuses and could be used against peaceful protesters. The law still must be signed by the president.

"It gives permission to the president to discretionally utilize the armed forces for practically any reason," said Michael Chamberlin, deputy director of the diocesan Fray Juan de Larios Human Rights Center in Saltillo. He said the law is not well-defined and could be used "for practically anything."

Proponents argue the law -- lobbied for by the armed forces -- provides a legal framework for how the president can deploy soldiers, while requiring an explanation for why army intervention is necessary, along with an obligation for local officials to present plans for improving local police.

But introduction of the law and the controversy it has sparked come as Mexico suffers shocking levels of violence; in terms of murders, 2017 is shaping up as the deadliest year in modern Mexican history. The controversy also reflects the difficulties and deficiencies of Mexico's crackdown on drug cartels and organized crime, which has cost more than 200,000 lives and left more than 30,000 disappeared.

The security issue has caused some conflict for the Catholic Church in Mexico, where at least 35 priests have been murdered since 2006. Church leaders have made mostly timid pronouncements on violence and corruption -- bringing a scolding from Pope Francis in 2016 -- and the church has fought accusations that it accepted tithes from drug lords.

Cardinal Carlos Aguiar Retes of Tlalnepantla, since named to Mexico City, backed the law, saying it was necessary for soldiers to have "their rules well-established." Other clergy in violent corners of the country expressed outrage, however, saying the approach of sending in the armed forces has not calmed the country and even caused the contrary effect.

"The more they have wanted to militarize or have militarized the state, with federal police, the navy (and) the army, criminality has increased," said Bishop Salvador Rangel Mendoza of Chilpancingo-Chilapa.

Rangel's diocese in Guerrero state has turned especially violent as dozens of criminal groups fight over the production and processing of heroin, prompting him to seek out cartel bosses for dialogue in an attempt to lower levels of violence.

"I've said that sending soldiers into the streets ... isn't going to fix anything," he told local media. "There has to be a dialogue, an attempt at approaching [those in illegal activities] as a way of lowering criminality."

Some critics say police forces remain as corrupt and incompetent and ever, the product of politicians pawning off public security responsibilities on the army. They say the approach reflects the short-term thinking of local Mexican politics, and the preference over the past decade to send in soldiers to battle cartels.

"The Mexican state's priority over the past 10 years has been to deploy the army in a frontal assault, instead of carrying out careful investigations or attacking (the cartels') finances," said Santiago Aguirre, deputy director of the Jesuit-run Miguel Agustin Pro Juarez Human Rights Center. "What this law does is put all of the state's resources in the army -- with ever bigger budgets -- without shoring up our investigative abilities or police forces."

The Mexican bishops' social ministry reacted in a statement, "Let's move toward having institutions that with qualified training, coordination and equipment to provide internal security and leave the army to its role of national defense."

Then-President Felipe Calderon announced a crackdown on drug cartels shortly after taking office in December 2006. More than a decade later, soldiers still patrol the streets, while accusations of abuses have accumulated against the armed forces, still considered by polls to be the country's most trusted institution, along the Catholic Church.

An analysis by the Washington Office on Latin America, a human rights think tank, found only 3 percent of the accusations against soldiers brought to civilian courts resulted in convictions.