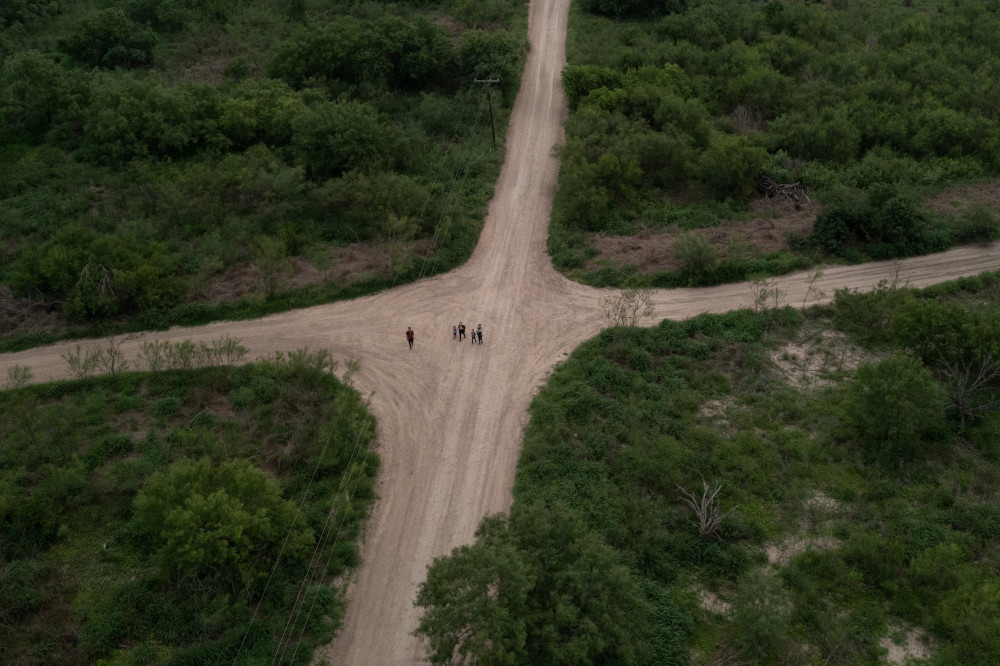 Migrants from Central America walk down a dirt road in La Joya, Texas, May 24, 2021, after crossing the Rio Grande. (CNS/Reuters/Adrees Latif)

After hearing the story of a Salvadoran immigrant and her plight to leave her home country, bishops from the U.S., Central America and Mexico meeting in Mundelein June 2 turned to a camera facing a woman identified as Maria Antonia.

Even though she was who thousands of miles away, in Irving, Texas, they gave her a blessing via Zoom.

"Our wish is that your family find stability and you'll find peace and continue to experiment God's consolation," said Bishop Oswaldo Escobar Aguilar of her home country.

The bishop of the Diocese of Chalatenango, El Salvador, led a dozen other brother bishops in the blessing as they saw through her story the reality of the complexities they discussed June 1 and 2: violence, displacement, looking for safety and a chance to start again.

On the final day of a historic meeting of bishops and international Catholic organizations gathered at Mundelein Seminary outside of Chicago, they discussed the challenges the church faces even while trying to get Catholics to understand church teaching on migrants such as Maria Antonia.

"We need to evangelize our own, we really do," said Don Kerwin, executive director of the Center for Migration Studies in New York. "Really, the whole church is not with us and we should be honest about that. We don't need messaging as much as we need Catholics to be in communion with migrants, as many of you have talked about.

"And we need Catholics to be Catholics. We don't need them to be Republicans or Democrats or whatever. The church really has a beautiful vision for gathering God's children, a vision of communion, a vision of diversity, and it works."

It was a sentiment shared by other participants, including Sr. Norma Pimentel, executive director of Catholic Charities of the Rio Grande Valley in the Diocese of Brownsville, Texas.

Despite gaining great respect for her work with migrants, Pimentel, a Missionary of Jesus, said she has seen her fair share of Catholics who don't like the welcome she's giving migrants, but she feels compelled to carry out the message of the Gospel by helping them.

She said the church sees two types of Catholics: "Those wanting us to tell them what to do, how to help [migrants]," and those who are "politicized, who believe that what we're doing at the border is wrong."

Even with the opposition, "it is our job to speak up," she said on the last day of the meeting organized at the urging of U.S. bishops to address ways the church will need to organize itself to help migrants since their numbers likely will increase as a result of the pandemic, climate change and political destabilization in Central America. 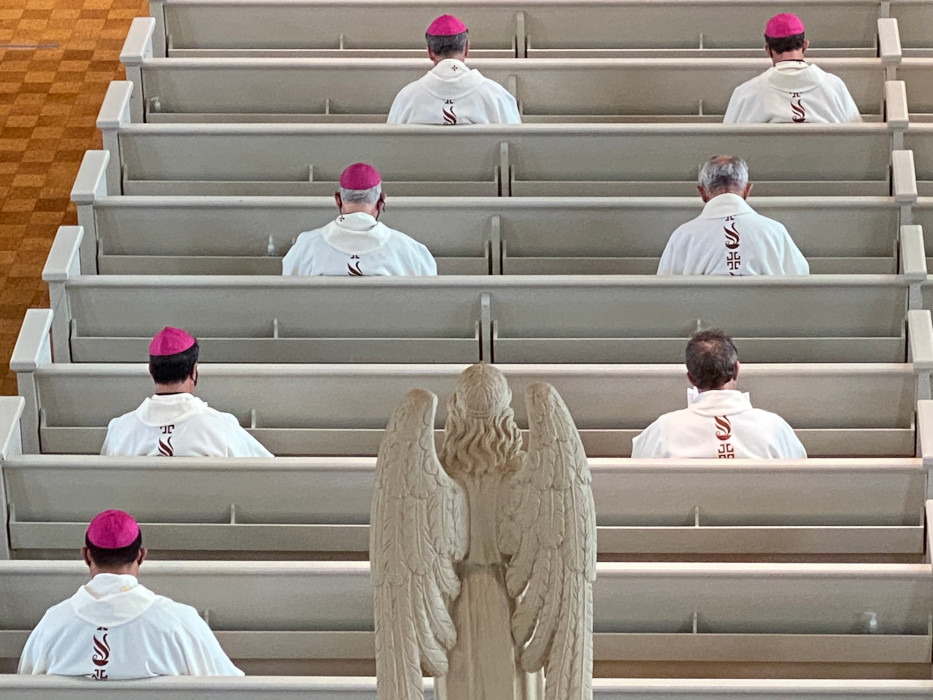 Bishops from the U.S., Central America and Mexico gather for vespers June 2, 2021, at the chapel of Mundelein Seminary outside of Chicago. Along with Vatican representatives and Catholic organizations, the prelates participated in an emergency session June 1 and 2 to set forth the U.S. church's response to immigration as well as to seek greater collaboration with bishops from countries where some migrants are coming from. (CNS/Rhina Guidos)

In the closing Mass June 2, the bishops kept the plight of the Salvadoran woman and others like her in mind. Archbishop Gustavo Rodriguez Vega of Yucatán, Mexico, the main celebrant, said that meeting had been extraordinary, inspired and guided by the Holy Spirit.

"The experience of migrants is a religious experience," he said.

In many cases, migrants talk of the strength they find in the dangerous journey headed north as they invoke "our brothers and sisters," the saints and the Virgin Mary to help them during the journey, said Rodriguez.

What they seek from the journey is something life-giving, he said, even though some find, instead, death.

The meeting the bishops embarked on is one that also seeks that life-giving nature in finding ways to be able to help migrants, he said.

"Maybe not to everyone's satisfaction but we've accomplished some objectives," Rodriguez said.

At the end of gathering, many bishops in the room, from the U.S. and Central America, pledged to implement measures in their dioceses to help migrants, whether they were passing through their dioceses or becoming permanent residents in their localities.

Cardinal Michael Czerny, undersecretary for the Vatican's Migrants and Refugees Section, addressed the meeting via Zoom.

"Each of you participating in these discussions is located somewhere: ecclesially, institutionally, professionally, geographically," he said. "Your parishes encounter migrants in many ways: There are parishes of departure, parishes of transit, parishes of arrival, parishes of short- or long-term settlement, and parishes of return."

"The pastoral task includes to welcome, to protect, to promote and to integrate. There are a myriad of opportunities and challenges for the communities all along the migrant's way," the cardinal continued. "This meeting will succeed if each one really tries to listen and understand 'walking in the other’s shoes.'"

The meeting, brought about because of what likely may become increasing numbers of migrants, is one about facing "enormous" pastoral challenges, he said, but he encouraged the prelates to find ways to create a "church without borders," one in which a person passing through will feel the welcome the Gospel calls on Christians to extend.

"Responding, these are some dimensions of pastoral ministry: to accept and guide the discernment of those departing, to support those who remain, to care for those in transit, to seek out those who arrive, to welcome returnees and to liberate and rehabilitate those who have been trafficked," Czerny said.

He encouraged work on both sides, those welcoming migrants and ministering to those facing conditions that lead them on a dangerous journey, working to address the conditions that displace them.

He urged them to dialogue with government institutions, explaining to them: "This is what we do, and then this is what we ask for, push for."

Participants from organizations such as Catholic Relief Services, the U.S. Conference of Catholic Bishops and other nonprofits said they had been reaching out to U.S. government officials, dialoguing with them on behalf of policies to help migrants.

He added: "We are sorry that artificial and unjust barriers get erected to divide the human family and push people to the margins of social, economic, political (and sometimes even church) life. While accepting national boundaries as legitimate, we want the church's compassionate ministry to go beyond political divisions."