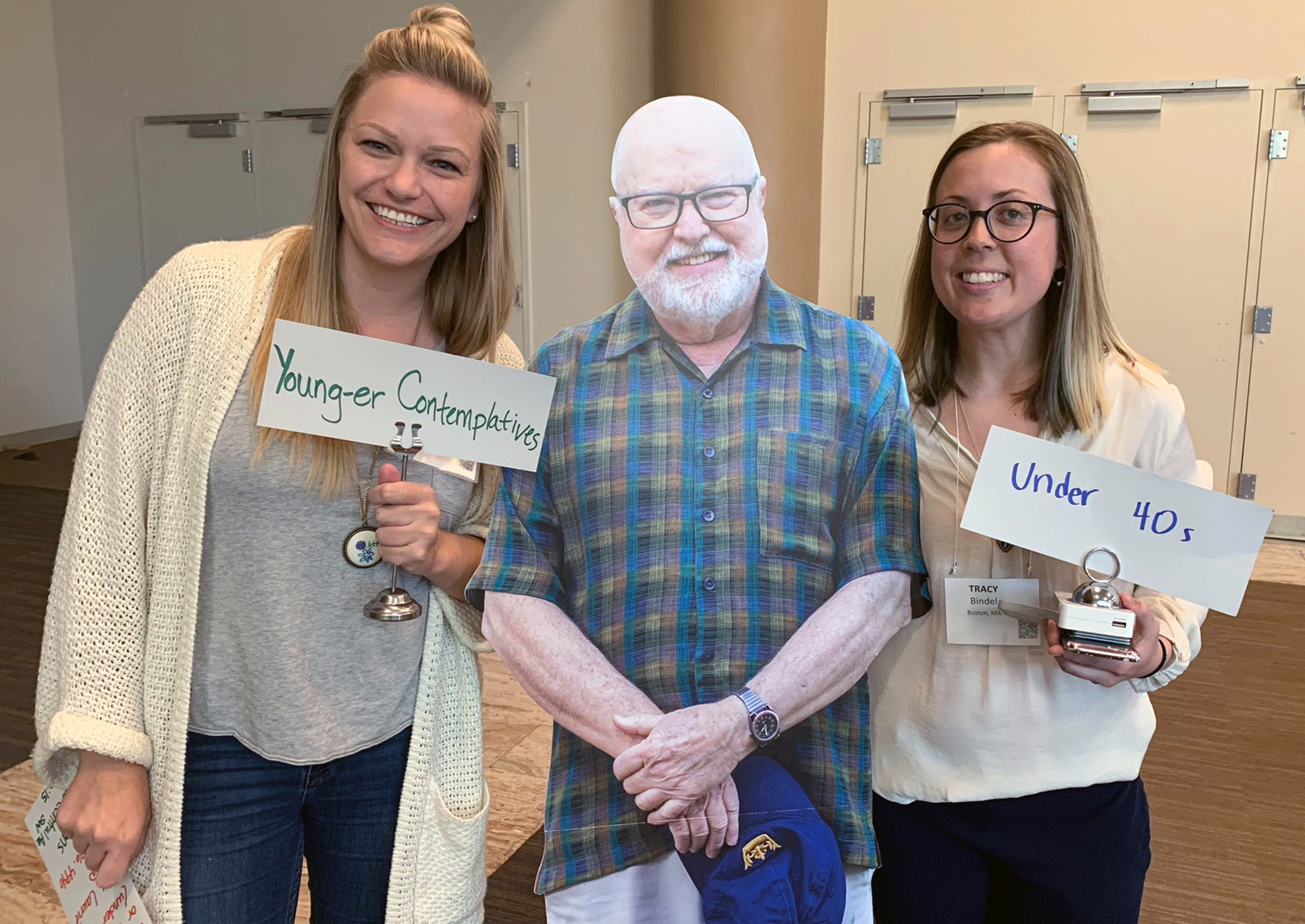 Laurie Wevers, left, 35, a mental health therapist and spiritual director from San Diego, and Tracy Bindel, 30, a law student and anti-racism activist from Boston, stand with a cardboard cutout of Richard Rohr while holding table stanchions looking for "young-er" and "under 40" contemplatives for a meet-up after an evening session at The Universal Christ conference in Albuquerque, New Mexico. (RNS/Cathleen Falsani) 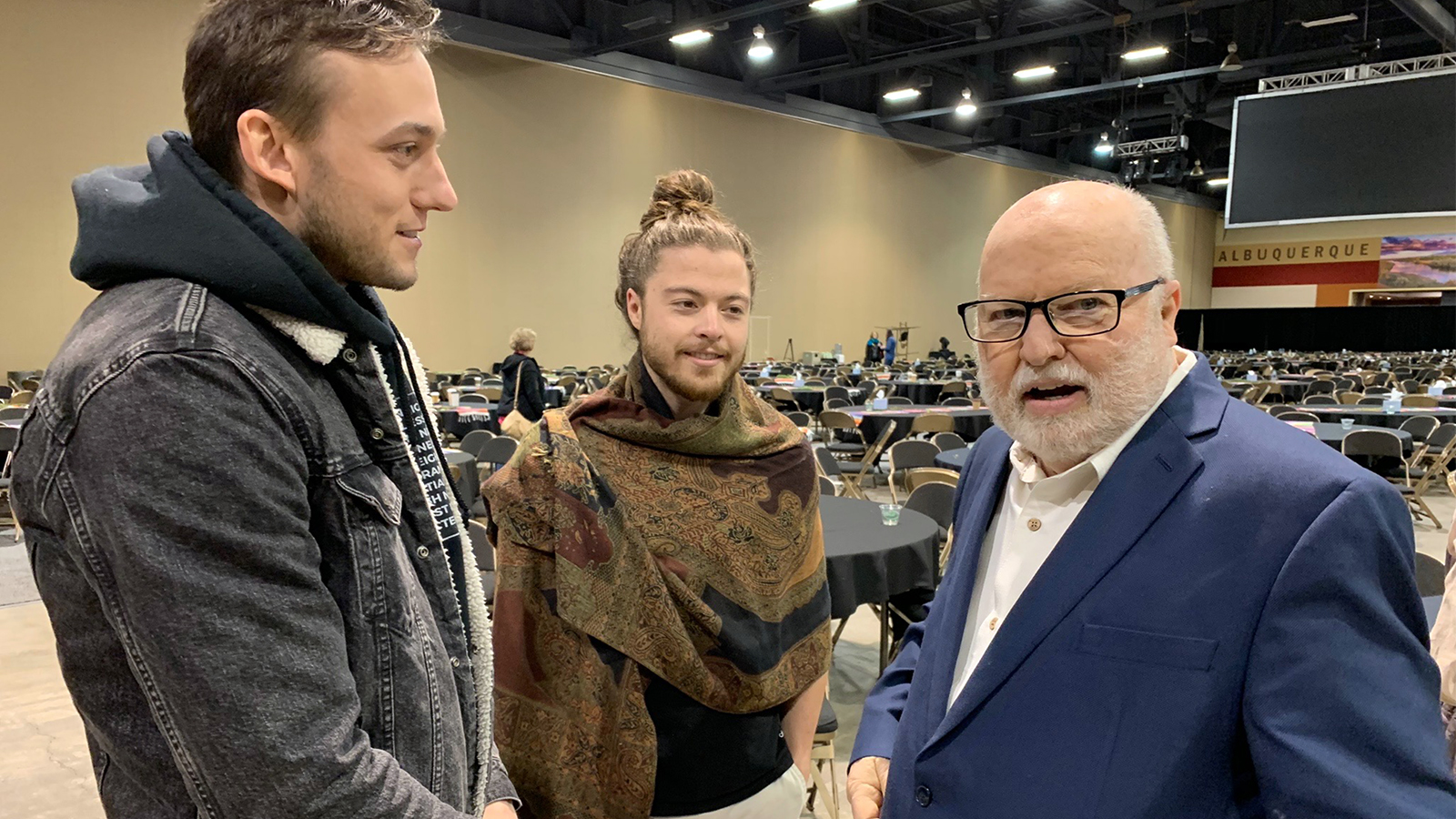 Richard Rohr, right, the 76-year-old Catholic contemplative, mystic and author, visits with Wes Lambert, 27, of Brooklyn, left, and Anthony Graffagnino, 28, of Berkeley, California, center, after the close of The Universal Christ conference in Albuquerque, New Mexico, in March 2019. (RNS/Cathleen Falsani)

Anthony Graffagnino describes himself spiritually as both frustrated and curious.

A Pentecostal turned Unitarian, the 28-year-old Graffagnino said he's had his fill with "stale and dead expressions of faith that I saw really doing nothing to better the people around me or the world around me."

Discovering the Christian mystical tradition through the work of Franciscan friar Richard Rohr helped change that.

"Father Richard's work allowed an entryway into Christianity when I didn't think there was any," said Graffagnino, who is studying to be an interfaith chaplain at Starr King School for the Ministry, a Unitarian Universalist seminary in Berkeley, California.

Graffagnino was one of a number of millennials drawn to The Universal Christ — a four-day conference in New Mexico's capital last month led by Rohr, one of the preeminent Christian contemplatives of the last century.

Pentecostal in his early childhood, Unitarian through his teen years and then spiritually unaffiliated until he began "flirting with the Quakers" in his late 20s, Graffagnino also has explored Vedic Hinduism, spiritual Taoism, mystical Judaism and Sufism.

Rohr's work has been a bridge between those spiritual traditions and his native Christianity, where they have "found a resting place in my own backyard," he said.

While many younger Americans today are spiritually unaffiliated, aka "nones" — a quarter of all adults under the age of 30 in the United States say they don't identify with any religion or spiritual tradition, according to the Pew Center for Religion and Public Life — millennials are increasingly finding contemplative spirituality appealing.

"One of my publishers says (younger Christians) are my biggest demographic — not Catholics but post-evangelicals," Rohr told Religion News Service in an interview a few days before The Universal Christ conference began in late March.

"The collectives are emerging outside of formal religion, for the most part, because we became too insular," the 76-year-old Catholic mystic said. "They've imbibed this kind of universal sacred, and we're seeing this especially in the millennials. They just put us to shame."

Whether it's in the stillness of silent meditation, walking a labyrinth, or centering prayer; the practice of engaging with scripture through Lectio Divina, the Ignatian tradition's Daily Examen; or a combination of Buddhist mindfulness, Kundalini breath work and Taizé prayer, many young adults are happy (to borrow a line from Van Morrison) to sail into the mystic.

"My heart speaks to me in the silence," said Laurie Wevers, 35, a mental health therapist and spiritual director in San Diego.

Growing up as an evangelical Christian in the Midwest, Wevers wasn't exposed to contemplative practice or mystical tradition. Then, a professor at her Christian college in Minnesota suggested she meet with a spiritual director.

While similar in practice to psychological talk therapy, spiritual direction's aim is different. In the Christian tradition, a spiritual director is a person of faith who is trained to help guide other people of faith into a deeper relationship with God.

Like all contemplative traditions, it places a high value on personal experience with the divine.

In the dozen or more years since Wevers found contemplative spirituality through spiritual direction, she has become a spiritual director herself and earned a master's degree in marriage and family therapy.

Most recently she enrolled in The Living School, an intensive two-year program of study in contemplative practice and mystical tradition at The Center for Action and Contemplation, founded by Rohr in Albuquerque 32 years ago.

"Being contemplative and being quiet did something to my heart and brought peace — it brought change without me having words [for] how that happened," said Wever, adding that other contemplatives, including Christians Parker Palmer, Meister Ekhart and St. John of the Cross and the Buddhist teacher Pema Chodron, also have influenced her faith and practice.

"I can't imagine doing a non-contemplative spirituality," she said.

Presently, about half of the Center for Action and Contemplation's four-dozen staff members are millennials — including Executive Director Michael Poffenberger.

"Richard's definition of mysticism is experiential knowledge of God, and in evangelical-speak you could call that the 'personal relationship with Jesus Christ,' " said Poffenberger, 36, who grew up in Washington state, the son of an Irish Catholic mother and a Protestant father.

While he was reared largely as a Roman Catholic, Poffenberger, who joined Rohr's staff in 2014, spent a few years in evangelical Protestant communities as a teenager.

"I had more of what I would call mystical experiences through evangelical worship than I ever did through my Catholic formation experience," he said. 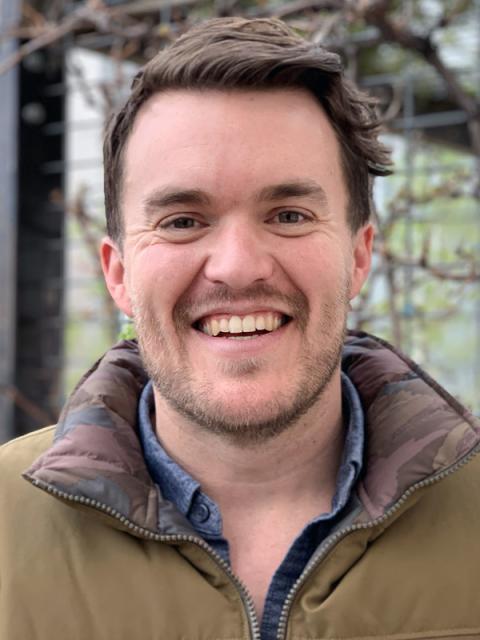 Poffenberger's first exposure to Christian mysticism came during his college years at the University of Notre Dame, where he became involved in social justice efforts.

One spring break, he spent a week at the Abbey of Gethsemani in Kentucky (the Trappist community where Thomas Merton was a member) reading Dorothy Day's autobiography, The Long Loneliness.

"I was radicalized by that experience," he said.

Later, during a summer spent volunteering alongside Mother Teresa's Missionaries of Charity in Calcutta, India, Poffenberger had a life-changing mystical experience.

In the evenings, after working with the Missionaries of Charity sisters as they tended to the poorest of the poor in their Home for the Dying, the community gathered in the chapel for the eucharistic adoration, where they would sit in silent meditation.

"Serving dying people throughout the day and then just sitting in total silence for an hour in the evening alongside these women who are just such symbols of love and courage in the world. … It's hard to then go on with life after that as if something hasn't changed," he said.

After graduating from Notre Dame, Poffenberger relocated to Washington, D.C., where he worked for a decade on various anti-violence efforts in Central Africa.

At a men's retreat during his tenure there, he became acquainted with Rohr's contemplative work.

"A lot of struggles I had were around power-privilege questions for me as somebody working in D.C.," he said. "What I experienced in Richard was an access point into the spirituality that actually gave meaning to those deeper questions and spoke to the reality of suffering that I was seeing and engaging with, and trying to make sense out of it."

Tracy Bindel, an anti-racism activist, attends law school in Boston and runs Freedom Beyond Whiteness, a nationwide network of contemplative action circles. For her, the Center for Action and Contemplation has been a spiritual community where she doesn't have to hide any part of herself.

Bindel grew up in an evangelical Christian community where she learned about the power of prayer. But as a young adult coming to terms with her sexuality, she felt she no longer fit in that tradition.

"When I realized that it didn't welcome my queerness, I kind of pulled that string and many other things fell apart in the world for me," Bindel said.

"Once I knew very clearly that I was a beloved child of God, it just became a matter of how do I actually live into that truth? The church that I grew up in didn't affirm that."

Eventually, with the help of Rohr, who teaches that "everything belongs," she found a home in completive practice.

Wes Lambert's unlikely path toward mysticism began a decade ago when he was a Southern Baptist teenager.

Some friends asked if they could lay hands on him and pray over him, something that to a very "hands-off" Baptist was an uncomfortable proposition. But Lambert relented, and when he did, something happened that changed his faith and life.

"This white light kind of overcame me and I ended up — the best way to describe it is in a trance — and I saw this vision of Jesus," said Lambert, 27, who works in the fashion industry in New York City. "For me, my whole faith was in my head. … This is what God had to do to get me out of my box."

Years later, after a relationship breakup sparked a period of questioning everything — including his faith — Lambert turned to meditation, which eventually led to a five-month stay in 2017 at the Trappist-run Monastery of the Holy Spirit in Conyers, Georgia.

"The silence and contemplation has really kept me grounded, holding the paradoxical questions of faith," Lambert said.

The contemplative tradition is "expansive enough … that it leaves room as you grow," he said. "To be Christian is to see Christ in everything."