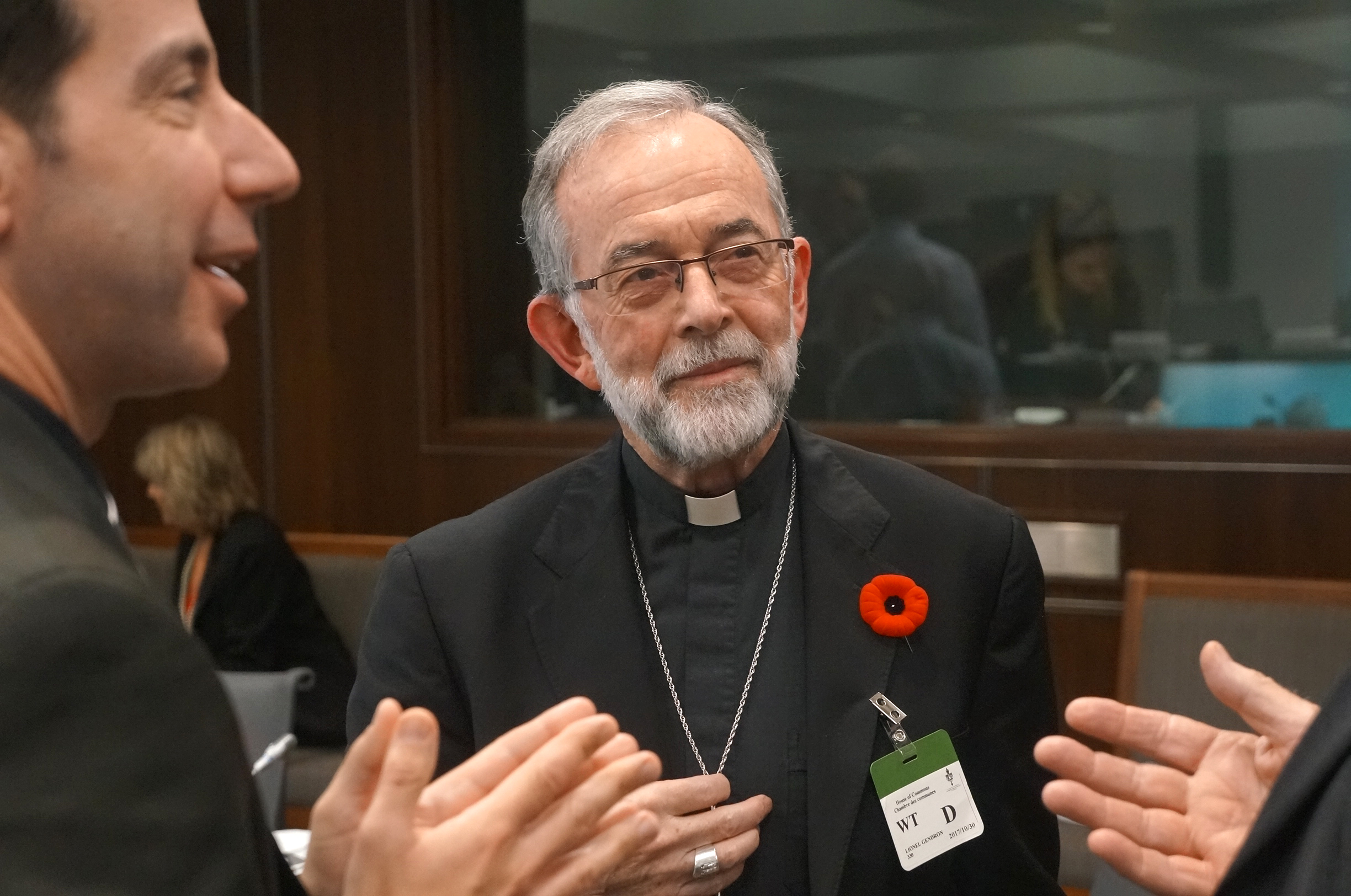 Quebec Bishop Lionel Gendron of Saint-Jean-Longueuil is seen in the House of Commons in Ottawa Oct. 30, 2017. (CNS/Canadian Catholic News)

A conservative member of Parliament blocked a motion calling on the Canadian Conference of Catholic Bishops to invite Pope Francis to apologize for the Catholic Church's role in abuse at Indian residential schools.

However, Charlie Angus, a member of Parliament, said the motion would come up for debate and a vote in the House in the coming weeks.

Angus is seeking unanimous government support for a motion to call on the CCCB to formally invite Francis to apologize in Canada, as requested by the 2015 report of the Truth and Reconciliation Commission. While the idea behind the schools was to promote the greater integration of indigenous communities into modern Canadian life, the schools -- many run by Catholic religious orders -- led to a situation in which many children were torn from their families, lost their native language and cultures and often suffered abuse. The commission's report used the term "cultural genocide" to describe what happened to aboriginal Canadians in residential schools.

Garnett Genuis, the lone dissenter on the April 18 motion, told journalists he refused to give consent because he thought Parliament should not be "dictating" to any religious entity how to run its affairs or how to engage in reconciliation. Stressing the principle of separation of church and state, Genuis said such a motion would be an unprecedented move on the part of Parliament in relation to a religion.

Genuis said the Catholic dioceses and religious orders that were involved in the schools had apologized and paid compensation for their role in running the schools. Whether the pope should come and apologize, he said, is a matter for the Catholic Church to decide.

Earlier in the day, the president and vice president of the Canadian bishops' conference held a news conference on Parliament Hill to attempt to "clear up misconceptions and inaccuracies" related to the motion.

Joining them via telephone conferencing was Irving Papineau, a Mohawk from Akwesasne and vice-chair of the Canadian Catholic Aboriginal Council. Papineau said a papal apology is "not much talked about" in his community.

"What is needed is not more words, but local initiatives and programs," he said, noting indigenous communities are diverse and need "tailor-made," not one-size-fits-all solutions.

Bishop Lionel Gendron of Saint-Jean-Longueuil, Quebec, president of the Canadian Conference of Catholic Bishops, told the news conference it was not true that Francis has refused to apologize, only that he could not personally respond to the Truth and Reconciliation Commission's call that he do so on Canadian soil within a year.

Gendron and Archbishop Richard Gagnon, CCCB vice president, noted that Pope Benedict XVI had apologized in 2009, and his apology had been accepted by the then-national chief of the Assembly of First Nations, Phil Fontaine.

Fontaine, however, had told the Canadian Broadcasting Corp. that the bishops were taking his words out of context.

"I would never say anything to diminish what happened nine years ago, but I also call on the Catholic Church, and the Canadian Conference of Catholic Bishops, to honor its commitment to reconciliation nd healing," Fontaine said.

When challenged by journalists about Fontaine's comments, Gendron said, "This is what he said," referring to his remarks after Pope Benedict's apology, but added, "if he has changed his position since then," that is his choice.

Francis is "open to coming to Canada, and what the pope says to indigenous people is what he determines is best, pastorally speaking," Gagnon said, noting he could not "articulate what the pope will say."

The bishops said the pope has been invited to Canada by the current and past two CCCB presidents, and reiterated that a trip remains possible.