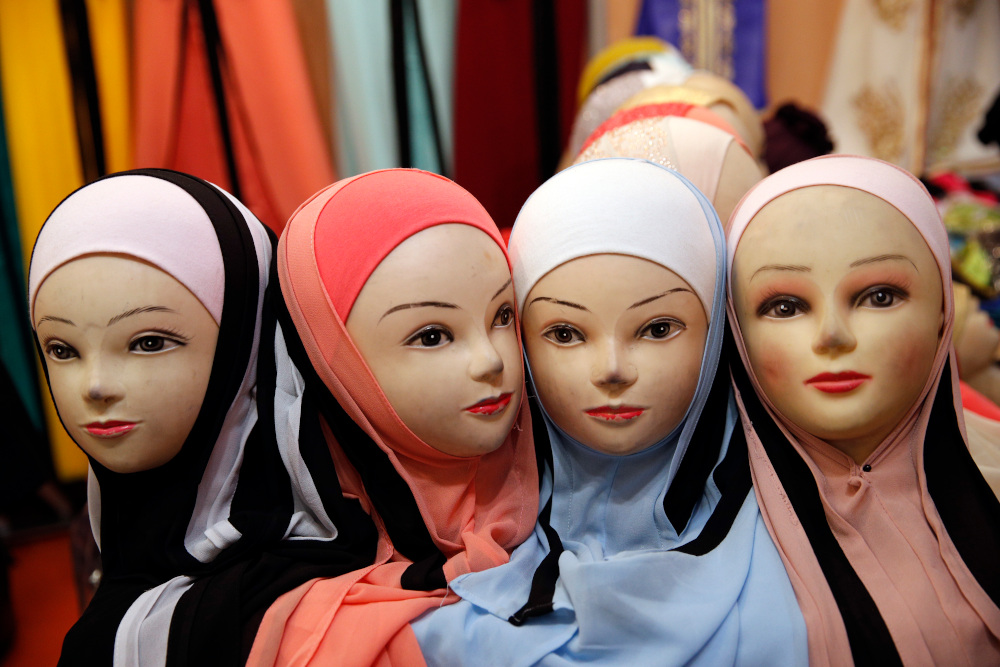 In this March 30, 2018 file photo, mannequins with veils are on display inside an exhibition hall at the France Muslim Annual Fair in Le Bourget, north of Paris. Islam is the No. 2 religion in a largely Catholic nation where many, especially the anti-immigration far-right, hone to France's roots and view its Muslim population, which grew from the nation's colonial past, as intruders and a threat to the French way of life, including secularism. (AP/Christophe Ena, File)

When a far-right French official disrupted a regional council meeting to demand that a Muslim woman accompanying a group of schoolchildren be ordered to remove her headscarf, "in the name of our secular principles," her own child buried his head in her shoulder and cried.

The scene has triggered a venomous national debate that is scrambling questions over the headscarf, Islam, immigration and radicalization.

The clamor reached a crescendo with the shooting and wounding Monday of two Muslims outside a mosque in southwest France by a suspect with past links to the anti-immigration National Rally party. The 84-year-old alleged gunman told investigators he attacked "to avenge the destruction of Notre Dame," Paris' grand cathedral ravaged by fire in April — which he blamed, inexplicably, on Muslims.

In other times, the Oct. 11 confrontation at the council meeting in Dijon might have been but one more installment in France's decades-long battle with itself over how to define, and enforce, secularism, a principle inscribed in the constitution more than a century ago to ensure neutrality regarding religions.

But today's uproar illustrates the growing unease — even contempt — by some sectors of society toward those Muslims seen as failing to join the French melting pot. Such views aren't limited to the far right: The conservative-led Senate approved a bill Tuesday banning mothers from wearing headscarves on school field trips, and a survey by the Ifop polling firm published Sunday suggested that eight out of 10 French think secularism is in danger.

Some contend this shows the normalization of Islamophobia in France.

"The veil (headscarf) is seen as the symbol par excellence of religious visibility" and is "seen by some ... as linked to radicalization," said Nicolas Cadene, No. 2 in the government's Observatory of Secularism.

"We're in a climate of a meeting of fears, emotions, instincts," he said in an interview.

For Cadene, French society is growing polarized as one part increasingly turns away from religion while another, notably Muslims, grows more visible. The attack inside Paris police headquarters early this month by a Muslim intelligence employee that left four dead raised already percolating tensions, he said.

In all cases, he said, the debate shows the confusion over the 1905 law separating church and state, the basis of the country's unusually important secular identity. He said the law is not meant to protect a "mythical identity, white and of Catholic culture" promoted by some.

Islam is the No. 2 religion in a largely Catholic nation where many, especially the anti-immigration far-right, hone to France's roots and view its Muslim population, which grew from the nation's colonial past, as intruders and a threat to the French way of life, including secularism. 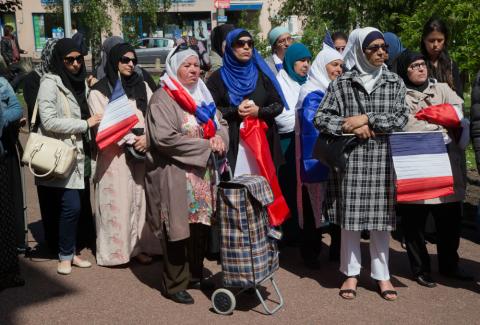 In this May 16, 2014 file photo, women wear muslim scarf and hold French flags gather outside the town hall of Mantes la Ville, northwest of Paris. The French Senate approved a bill Tuesday proposed by the mainstream right that would oblige women wearing headscarves to remove them when accompanying school outings. The bill has almost no chance of becoming law since the lower chamber, controlled by President Emmanuel Macron's centrist party, will almost certainly axe it. (AP/Michel Euler, File)

Fifteen years ago, France forbid students from wearing "ostentatious" religious signs in classrooms, including headscarves. Seven years later, it became illegal to wear face-covering veils in French streets. While all showy religious signs are included in the 2004 law and all garments covering the face are banned in the 2011 measure, it has never been a secret that Muslims were the target.

The mother who was the focus of National Rally official Julian Odoul's anger at the Dijon regional meeting has said she decided to accompany a class because her son implored her to go.

"What he told me when he was crying is that he felt everyone was against me," the woman, identified only as Fatima E., told the Collective Against Islamophobia in France, which published the interview.

"I felt a rejection I've never felt before," she said. "Today, I have a negative opinion of what is called the Republic."

A caustic political climate five months before municipal elections is feeding today's debate. A tattered mainstream right is trying to rebuild itself by playing the anti-immigration card , while a newly strengthened far right tries to lure them to its ranks.

The French Senate approved a bill Tuesday proposed by the mainstream right that would oblige women wearing headscarves to remove them when accompanying school outings. The bill has almost no chance of becoming law since the lower chamber, controlled by President Emmanuel Macron's centrist party, will almost certainly axe it.

But the issue sparks discord even within Macron's government. For Education Minister Jean-Michel Blanquer, "it is not desirable" for a mother to wear a headscarf on a field trip. Prime Minister Edouard Philippe says that it's fine — as long as the mother doesn't proselytize.

Macron has shown cautious opposition to the idea.

"The wearing of a veil (head covering) in public spaces is not my affair," he said last week. "Laicite (secularism) isn't about that."

The real concern, he stressed, is stigmatization of Muslims, the majority of whom have adopted the French way of life.

Macron has concentrated on fighting radicalization and the apparent growth among Muslims of a community-based identity, which the French widely view as fertile ground for the propagation of political Islam.

For some, the issues are linked.

Far-right leader Marine Le Pen views the constant debate over the Muslim headscarf as a result of "massive immigration," which, she contends, leads to such closed communities.

"The veil is an ideological marker. It's a marker of identity," she said recently, also calling it a "political weapon."

For Muslim groups, the mosque attack was the culmination of a growing climate of hate.

Abdallah Zekri, council member and head of the Observatory for Islamophobia, decried those who criticize Islam to build their reputations via TV talk shows. Barely a day goes by without a new round of soul-searching over secularism by politicians and pundits getting an unfiltered hearing in the French media.

A noted Lyon-area imam, Kamel Kabtane, denounced what he said was the "fractious and dangerous media and political campaign against Islam and Muslims."

Muslims fear more of the same from "the entrepreneurs of hate and violence" who want to "pit French against French," he said.