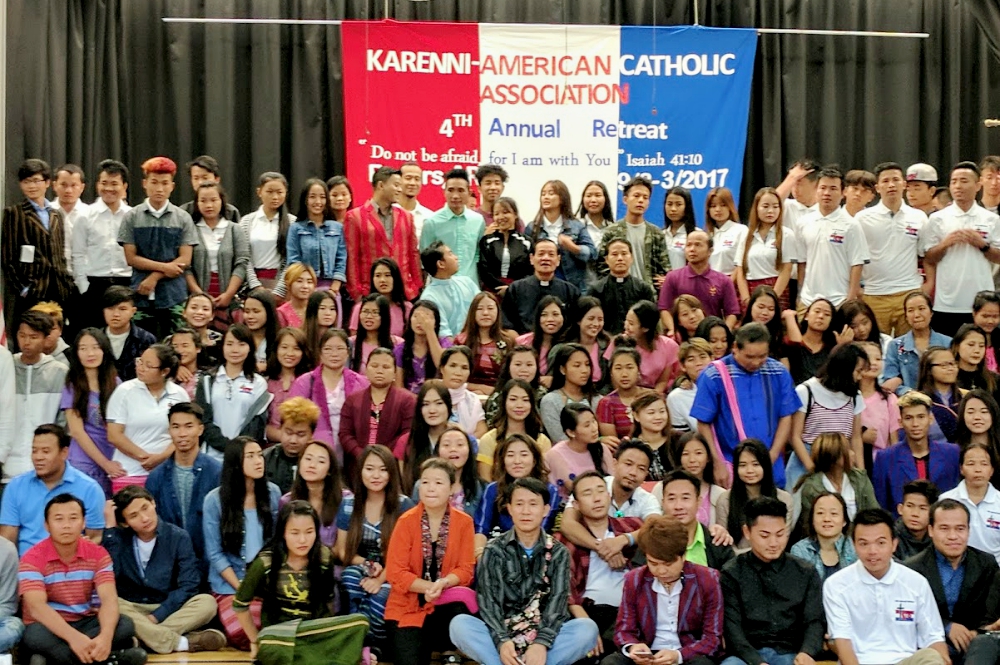 Bishop Stephen Tjephe of Loikaw, Myanmar, is modest about his visit to the Karenni communities in the United States. He stresses that he could not do much, except be with them, giving them support and encouraging them to live a life of faith.

Tjephe, 62, was installed as bishop of Loikaw on Jan. 11, 2015. His diocese is located in Kayah state, eastern Myanmar, bordering Thailand. The prolonged conflict in Myanmar, also known as Burma, has caused one of the most protracted refugee situations in Asia. 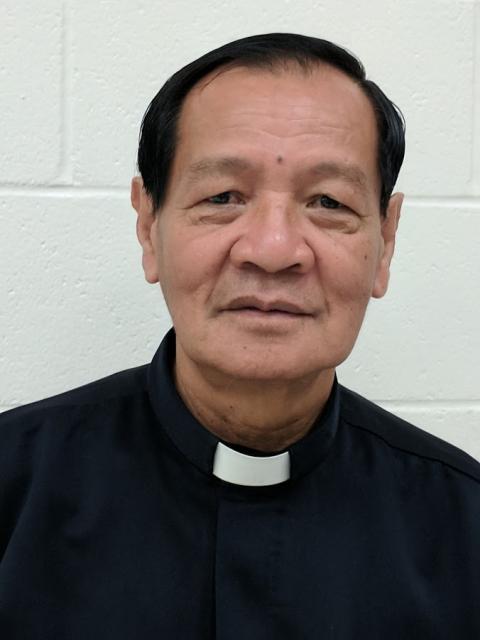 After Burma became independent from the British government in 1948, the country was embroiled with internal conflicts involving communists and ethnic groups. The conflict continued when Gen. Ne Win became military dictator. There was insurgency from various ethnic minority groups that sought autonomy.

The government suppression drove hundreds of thousands of Karen, Chin, Mon and Karenni to the border into Thailand or Malaysia. It was in Thailand camps that these young Karenni Catholics were born. Most of them came from Tjephe's diocese.

Meanwhile, in the western Myanmar state of Rakhine, a minority Muslim people called Rohingya also face persecution. Although they have been living there for generations, they have not only been denied citizenship but deprived of the right of free movement and higher education. The latest violence forced hundreds of thousands to flee Myanmar into Bangladesh. Pope Francis in mid-August said he was saddened by the news "of the persecution of a religious minority, our Rohingya brothers and sisters."

Interviewed in Arkansas, Tjphe talked about his impression of Karenni Catholics, the church's position on the Rohingya people and his visits to the many Karenni communities in the U.S.

NCR: What is your impression from your pastoral visit to Karenni communities? What have you learned?

Tjephe: I would like to say that our people, comparing to the past life, this is a new life for them, a transitional life-period for them. Regarding the livelihood, there is a progress compared to my first visit in 2011. Then, they just rented apartments; now, they own homes and cars. Their livelihood is advancing. Their children are in schools and some have graduated. They tried to adapt themselves to the U.S. life.

Only the elderly people, especially those who speak only Burmese, some of them are still not happy in this country. They just remain inside their homes and do not go out. It is like a prison for them. But anyhow, it is a better life compared to the previous life in refugee camps where they lived for a long time. It was a life of misery there.

They brought with them many things into this country, but the only serious thing that matters is faith. They practice their faith, though not perfect. They are united to their old culture, which is faith in Jesus. They are devout and united together.

For some elderly people, especially those who are converted to Christianity recently, their faith is not really deep inside, in a sense that they do not understand Christianity, catechism and other teachings. The only faith they have in Jesus is that we are Catholics and we attend Mass together. They observe the Mass. They have devotional spirituality. So, for them, we need to instruct and follow up with religious instructions, especially those who come from the camps.

But there are those who had been in church community back in their villages in Myanmar. They have received proper religious instructions and catechism. With their strong faith life, they can be church leaders here and can also lead new converts.

Apparently, you have great care for your people. You also sent priests to this country to care for them. How many priests from your diocese are here?

Five from my diocese.

What about the American church? What can they do to help?

Although they care for them, they really don't know what to do for them due to language barriers. They would ask other parishes to see if there are Burmese priests to care for these new migrants in their resettlement.

Some seem not to care very much. Probably, they have no idea about these people. The Karenni leaders want their people to be known to parishes where they live. They also want parishes to know about their people. That's why, when I visit, they want me to say Mass to let these pastors know that Karenni people are attending Mass in their parish. Help integrate them. Some American Catholics really care for our people. They try to help them in all means. Taking care of them with whatever the needs are.

In our diocese, when a local parish helps poor people regardless of their religious affiliations, they intend to want to belong to the Catholic community. Because they know that we care. For us, charitable social work is an effective means of evangelization.

For example, in our diocese in some of our villages where priests and sisters cannot be reached, we have a group of "little evangelizers" (zetemins) to visit these people. They go to villages and visit with the people in the homes. They stay with them in villages. They provide them with medical care. They teach preschool students and catechism to older kids. At the same time, some zetemins traveled with the refugees and lived with them in camps across the border.

When the villagers come to know them, they would ask the evangelizers that they wanted to be like them. Could you teach us how to pray? They would ask who God is. Since we are kind and charitable to them, they said they want to be like us. This is preaching by action. It is not just preaching with words. Zetemins are laypeople.

Talking about means of evangelization, is this weekend gathering good for the young people?

Yes, it is a starting point by bringing young people together to pray, listening to talks, and sharing fellowship. It is a good means to deepen their spiritual life as a larger community. This gathering is better than nothing.

However, we need to organize a little better. They are looking to set up and want to be recognized as an association. However, they need good leadership to guide them, to help them.

They need to have a plan, direction and try to actualize it. They have just begun to think of their network as some kind of association or community. They see something positive in this gathering on a national level. Again, the leadership is a little weak. They need a lot of sacrifices to organize this.

Pope Francis has a great concern for refugees and migrants. The last few weeks, there has been violence against minority Rohingya. He even called them "Rohingya brothers and sisters." What is the church in Myanmar's comment on this sensitive issue?

Actually, we have the same mind and the same idea as Pope Francis. We tried. Rohingya is a very sensitive language. The government has asked not to use the term Rohingya, because it is very sensitive to Buddhists, especially those who are against these people. But there are some Buddhists who are very good who consider Rohingya people not as minority but as human beings. We also recognize that they are human beings. But it is in the mind of some ultra-nationalist Buddhists who want to get rid of them from the country. It is very difficult position to be in. We have to be reminded by the very fact that these people are fighting for their lives. ... 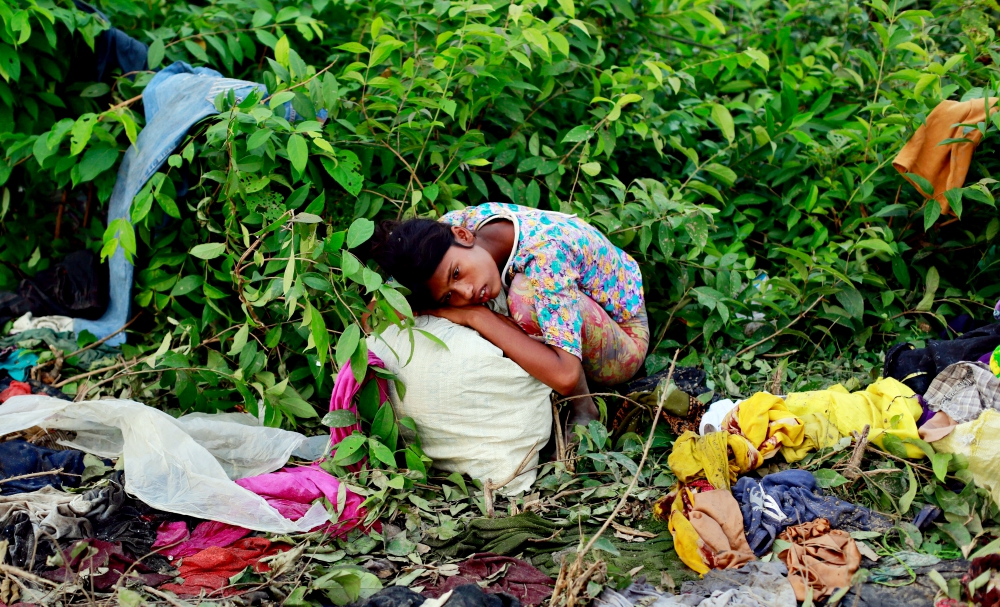 Our Cardinal Charles Bo of Yangon also talked about this injustice and persecution against Rohingya, that we must consider them and treat them as human beings. The cardinal also said he raised his voices against religious extremism, the plight of the internally displaced people and treatment of minorities.

You diocese has a mission to build a church that is participative, inculturated, self-reliant and has missionary outlook, engaging dialogue with other religions by mutual understanding and cooperation. Could you elaborate?

We have a good relationship with people of other religions and denominations. We have no problem with them at all. We are peaceful with them. Although we are minority, people of other religions respect Catholics very much because of our devotion and our quest for unity. We never created any problem. The only problem we have may be insurgents. But we have to understand that they feel persecuted and they fight for their rights. But there is a peace agreement.

My predecessor, Bishop Sotero Phamo, initiated dialogue of reconciliation with the insurgents and the government. He was able to have two groups sign the cease fire and the peace agreement. They reconciled with the government.

Another big group of insurgents is also coming in. Earlier, this group wanted independence, but two months ago, they wanted to have a federation with all the states. Our democracy leader, Aung San Suu Kyi, also wants a federation. 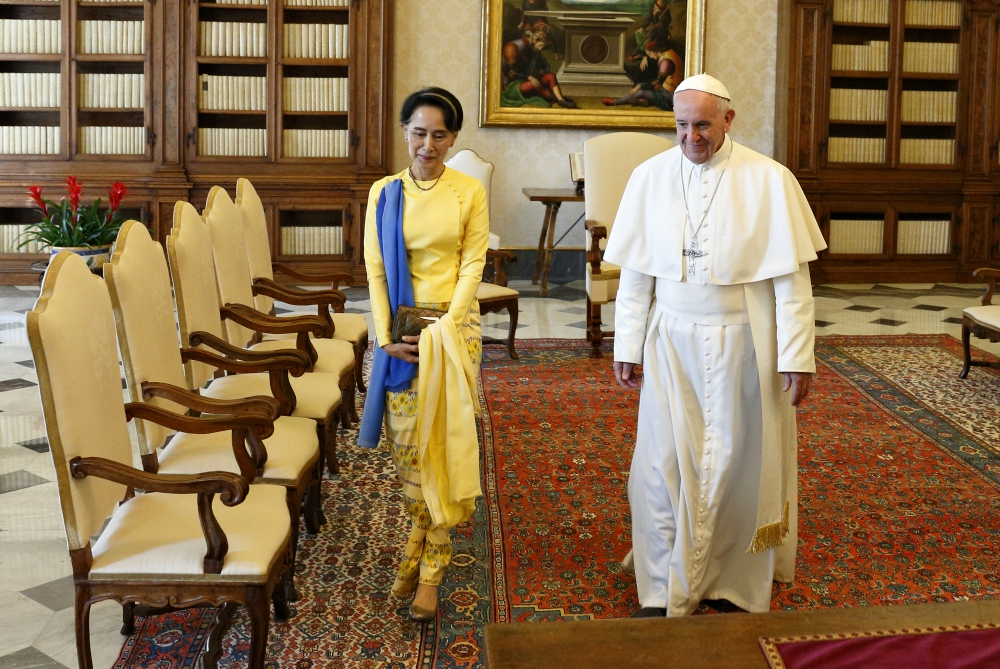 Pope Francis walks with Aung San Suu Kyi during a private audience at the Vatican May 4. (CNS/Paul Haring)

Pope Francis will visit Myanmar in November. What do you think of his visit?

I am glad that he is coming in. I am happy about that. I am hoping he will come in to bring peace and justice. No, he is not going to change the government. With his visit, people will know about our life in Myanmar. We are aware that some priests are afraid of security. Perhaps it is because of the Rohingya situation, since the pope talked about Rohingya. Those who are against the Rohingya might feel that the pope would try to change their mind.

But anyway, we have talked to Aung San Suu Kyi and the military. We talked about security. We invited him to come to visit Myanmar two years ago to celebrate 500 years. Aung San Suu Kyi met him twice. I think God will be with him and there is no fear about his security.

What kind of messages would the pope give?

He will talk about peace and dignity of human beings. We all are God's creatures. We need to be fair for all of them. Peace and justice for all human beings. What is the purpose of his visit? Love and peace. This is the main topic. Bring us love, harmony, and peace. That's the theme of the visit.

As far as the preparation, I don't know, as I was out of the country. I know that there will be two open Masses, and that the pope will visit Yangon and Nay Pyi Taw.