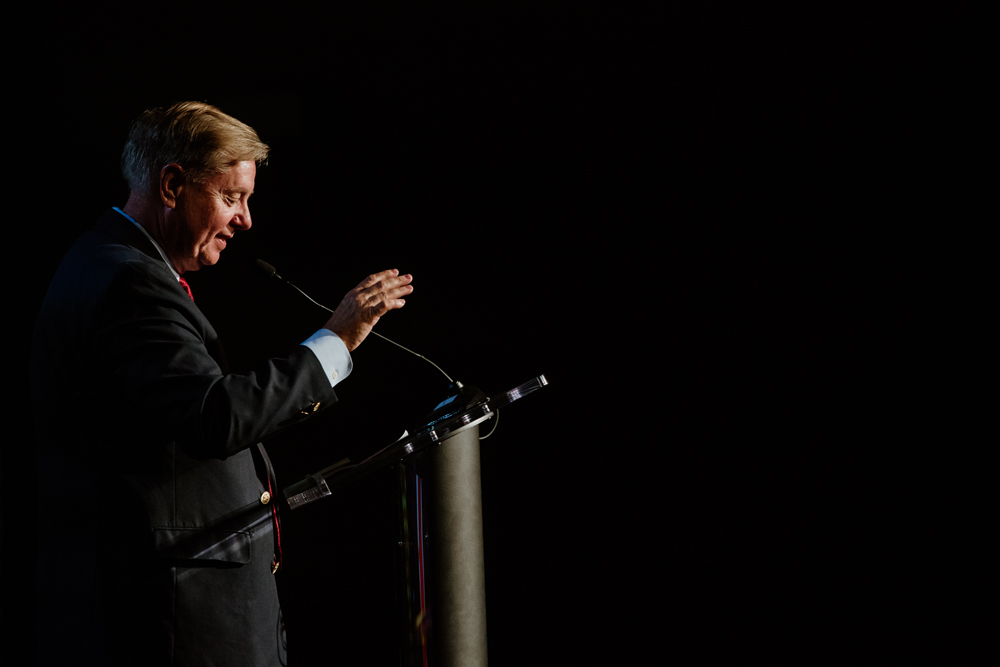 In the closing address of the ninth annual Napa Institute conference, Republican Sen. Lindsey Graham of South Carolina delivered an entertaining appeal for the reelection of President Donald Trump, despite "chaos" in the administration at times.

Graham, who lost the 2016 Republican presidential nomination to Trump, said he and Trump "got off to a rotten start," and admitted that he once "hated his guts."

But now, the Southern Baptist said about the president, "I like what he does, not necessarily the way he does it."

A broad variety of informational, educational and catechetical presentations were available to participants at the Napa Institute over the course of the event in 13 plenaries and 27 45-minute "breakout sessions" as well as other free-standing offerings.

As in past Napa Institute conferences, marquee issues included defense of religious freedom, traditional marriage and the unborn, but there was also much attention to parish renewal and the sex abuse crisis and cover-up.

Among other observations, the four underscored the role of the laity in oversight of church financial dealings and handling of abuse or other church personnel misconduct.

Other plenaries focused on economics, reenergizing parishes, and cooperation between Catholics and evangelicals.

In a keynote titled "The Socialist Delusion and the Catholic Business Solution," Andrew Abela, provost and senior vice president of the Catholic University of America, laid out an apologetic for a principled "entrepreneurial capitalism" that acknowledges church social justice teachings in contrast to an "imperialistic capitalism" that seeks to "impose one's will on others" and "extract more wealth than you create."

Arriving from across the U.S. and Canada as well from several other nations, participants were not limited to intellectual offerings. Free-time alternatives included chocolate making, vineyard tours, painting class, lawn games, beer tasting, horseback riding and a Franciscan mini-retreat.

Only one of the 13 keynotes, "Changing the Hearts and Minds of the Next Generation," featured a woman — Kristan Hawkins, president of Students for Life of America, in conversation with former Wisconsin Gov. Scott Walker.

A dozen women were among presenters in nine of the 27 breakouts.

"We have struggled maintaining a balance of women," Busch conceded in an email. He noted he had "added two women board members to the Napa Institute" and cited examples of women who have been speakers at Napa events.

"That said," he continued, "we need more women. I will charge the speaker committee to achieve that objective."

The reflection was in keeping with the annual gathering’s advancement of Catholicism, closely aligned to what many might associate with another era — solemn liturgies, nuns in full habit, a muscular emphasis on confession, and a hint of triumphalism in the air: rosary, exposition of the Blessed Sacrament, eucharistic procession, and access to time with first-class relics of Pope St. John Paul II, St. Pio of Pietrelcina (Padre Pio), St. Maximilian Kolbe, and St. Maria Faustina Kowalska.

On each of the main days of the conference there were multiple Masses with opportunities to celebrate the Eucharist, including in Latin.

Space and time were reserved daily for the rite of reconciliation and/or spiritual direction.

Attendees say the sacramental and pious practices help nurture habits of holiness and a reverence for the church, its teaching authority and its doctrines, as well as the grace to follow them.

"God works in mysterious ways," Graham said, and was drowned out by laughter before he could finish the sentence. "If you had told me in 2016 that Donald Trump would be the leader of the evangelical movement. …"

"When you back away," Graham added, Trump "has been a hell of a good president for all the things that matter," despite "chaos" at times generated at the White House.

The senator said that under Trump, the U.S. military "is stronger than at any time since Ronald Reagan," and that the economy is historically robust.

Trump has appointed a near record number of federal judges: 43 to courts of appeal and 99 to district courts. Dozens of others await confirmation.

Graham reviewed last fall's contentious confirmation hearings regarding Kavanaugh, strongly criticizing what he said were efforts to have the nominee's "life cut up and destroyed" by Democrats manipulating "accusations of 30 years ago."

The lawmaker claimed both Kavanaugh and Christine Blasey Ford, who had accused the then nominee of sexual assault, were both victims of the process.

Graham's fiery intervention during the Kavanaugh hearings has been credited with saving the nomination.

Graham was introduced by Marjorie Dannenfelser, president and an organizer of Susan B. Anthony List, a nonprofit that campaigns for pro-life legislation and candidates.

It was Dannenfelser who reportedly served as the link between the Napa Institute and Graham, who had not been familiar with the now 10-year-old organization.

The activist praised Graham for promoting the Pain-Capable Unborn Child Protection Act, which would make abortions of fetuses after 20 weeks of gestation illegal.

If doctors won't operate on a 20-week-old fetus without anesthesia, "Why would we dismember it?" Graham asked.

"Over time we are going to win this fight," he pledged, stating that only seven nations allow unconditional abortion on demand after 20 weeks, including China, North Korea and the United States.

"Being in this club is not who we are," he said to applause.

A sustained, standing ovation followed Graham's keynote, which he concluded by saying, "Let's kick their asses in 2020."

Graham's address, as well as comments from presenters and participants, made clear the institute's affinity for conservative politics.

Notable was the number of participants in clerics, cassocks, robes and habits. Clerics and religious were given a 50% discount on the Napa Institute's $2,600 registration fee. Many also relied on scholarships.

Bishops attended at no cost. More than a dozen were present, including Philadelphia Archbishop Charles Chaput, the "ecclesiastical adviser" to the Napa board of directors.

NCR attended keynotes, breakout sessions and other presentations free, and commuted from nearby Fairfield.

The event is staged at the luxury Meritage Resort and Spa in Napa, which is part of the Irvine, California-based Pacific Hospitality Group  of which Napa Institute co-founder Tim Busch is founder and CEO.

Participation in the annual gathering has increased every year, as have the Napa Institute's outreach and influence.

In July 25 opening remarks, Busch told attendees that "more than 100 mergers and alliances" of lay apostolates have been stimulated through networking and new relationships at the conferences.

He and others say fruitful exchanges along these lines often take place during the post-9 p.m. "In Vino Veritas" cigar receptions.

In May, the organization officially launched the Napa Legal Institute, which will, among other things, provide financial, organizational and legal resources to nonprofits "faithful to the Magisterium of the Catholic Church." 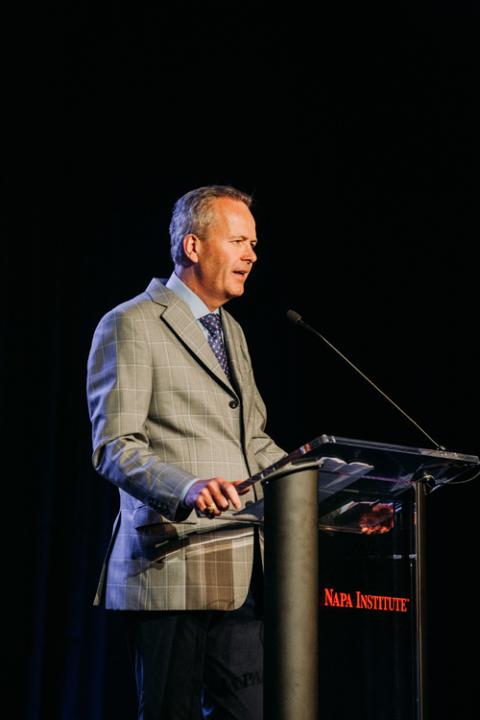 The new entity's directors include Leo Leonard, executive vice president of The Federalist Society who has advised President Trump on judicial selections.

The Napa Institute has also co-sponsored conferences on topics including labor and church sex abuse reform.

This July's Institute theme was "This Catholic Moment: Authentic Faith in Times of Crisis."

"This is a time of crisis and cleansing for the church. … There has probably been more cleansing in the last year than in the past 25," Busch said, calling on the standing-room-only crowd to "not tolerate the dictatorship of clericalism."

The "antibiotic" to hierarchical leadership lapses, he said, "is really the laity" who have been called by the Second Vatican Council to "engagement and empowerment" and to "our seat at the table."

Busch noted it was Burke's first Napa address. He called the cardinal "a man of truth who takes a lot of criticism for that."

Burke received the Institute's Award for Apostolic Zeal in recognition for his "commitment to Christ and his church by boldly proclaiming the Gospel in word and in deed." 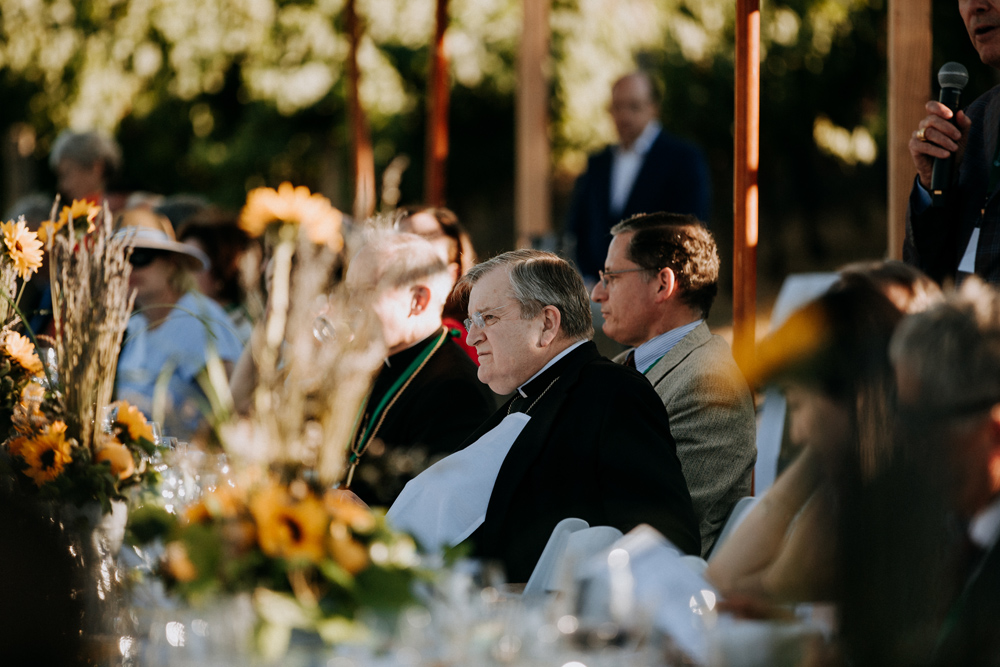 Weigel urged listeners to embrace an "all-in Catholicism" that embodies rigorous sacramental practice and "service to the poor and marginalized, and the walking wounded in our decadent culture."

Burke implored the assembly to fight division and apostasy. He reviewed several "pervasive errors" in church practice, including laxity around teaching on sexuality and on the centrality of "salvation through faith in Christ alone."

Five protestors — four from the Thomas Merton Center in Palo Alto and one from the Northern California Call to Action chapter — arrived Thursday morning as Weigel and Burke were speaking. The group was escorted off the resort campus by local police called by Meritage security.

Among other things, the five told NCR they wanted to call attention to what they described as the Napa Institute's anti-Francis bias.

In a prepared statement, the Thomas Merton Center claimed the Institute "is allied with prominent, conservative political and religious leaders — some of Pope Francis' most vociferous critics. We see the alliance as antithetical to the Christian teachings of the Beatitudes."

"We do not advocate any derogation of Pope Francis," Busch told NCR. "As I [have] stated, we support Pope Francis and listen carefully to his teachings. I particularly support his issuance of the motu proprio to provide more accountability for bishops in all aspects. More can be done, but this is a huge start."

In early May Pope Francis issued motu proprio (on his own initiative) sweeping new church laws on investigation of clergy sexual abuse. He mandated that all priests and religious order members worldwide report any suspicion of abuse or its cover-up. Francis also established a new system for evaluating abuse reports or cover-up by bishops which empowers metropolitan archbishops to investigate bishops in their regions with Vatican consultation.

Asked in May if establishing Burke as a featured presenter was tantamount to endorsing the cardinal's controversial confrontations of Francis, Busch said Burke "is a serious theologian" and "recognized by many Catholics as someone that they would pay attention to."

Attempts to interview Burke and Graham were not successful.

The event program featured 13 "keynote sessions" plus Graham's concluding address as well as 27 45-minute "breakout sessions" and other free-standing presentations.

*This story has been updated to correct Gomez's title for the bishops' conference.