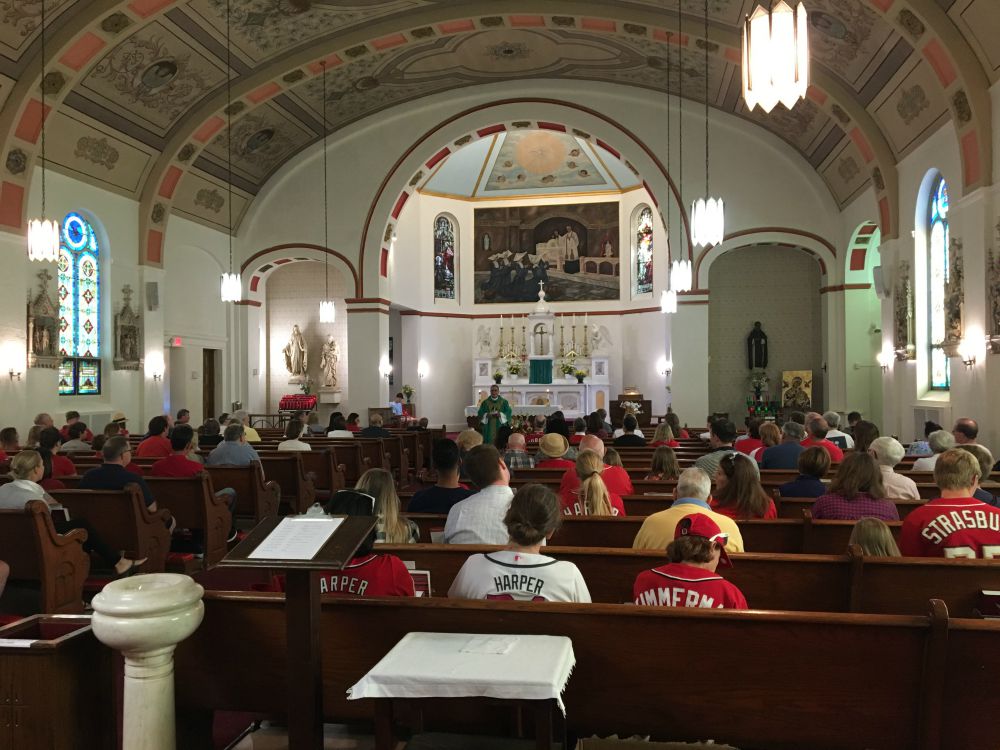 The pews are full at the Nats Mass on Sept. 10. (Julie Bourbon)

It might be a stretch to chalk up the Washington Nationals' clinching of their fourth division title in six years to the prayers of the faithful who attend Sunday Mass at the church closest to the stadium. But baseball fans are superstitious, the season is long, and the Lord works in mysterious ways. Who can really say?

St. Vincent de Paul, a small parish in transitioning Southeast Washington, D.C., sits just one block from the stadium that's slowly become an anchor since it opened in 2008. The team, known locally as the Nats, won a dismal 59 games that year, losing 102 and causing some fans to question their faith (in the team, if not in the baseball gods). The vibrant scene of condos, bars, and restaurants that now surrounds both the church and Nats Park was still just a gleam in a developer's eye.

Since then, the neighborhood and the team have thrived. And what started in 2014 as an effort to reach out to Catholics who come downtown for Sunday home games has blossomed into something else altogether. Something with its own hashtag: #NatsMass.

There were 10 scheduled Sunday 1:35 p.m. games at Nats Park this season, and before each, the noon Mass, or Nats Mass, at St. Vincent de Paul was celebrated. It became a weekly noon Mass only this past Easter. Just over a dozen people regularly attend on non-game days; close to 150 came to the last Nats Mass of the season, before a match-up against the Mets, on Sept. 10. A small crowd stood in the back. Bryce Harper and Stephen Strasburg jerseys predominated, along with shorts and sneakers.

"I have to say, I just love it," says Fr. Andrew Gonzalo, who has been the pastor since July 2016. Father Andy, as he's known, could count on one hand the number of people attending the noon Mass then. Now, even fans of visiting teams come at times. "Baseball is unifying," he says, "so we come together, even when we come from different teams, in the name of the Lord." 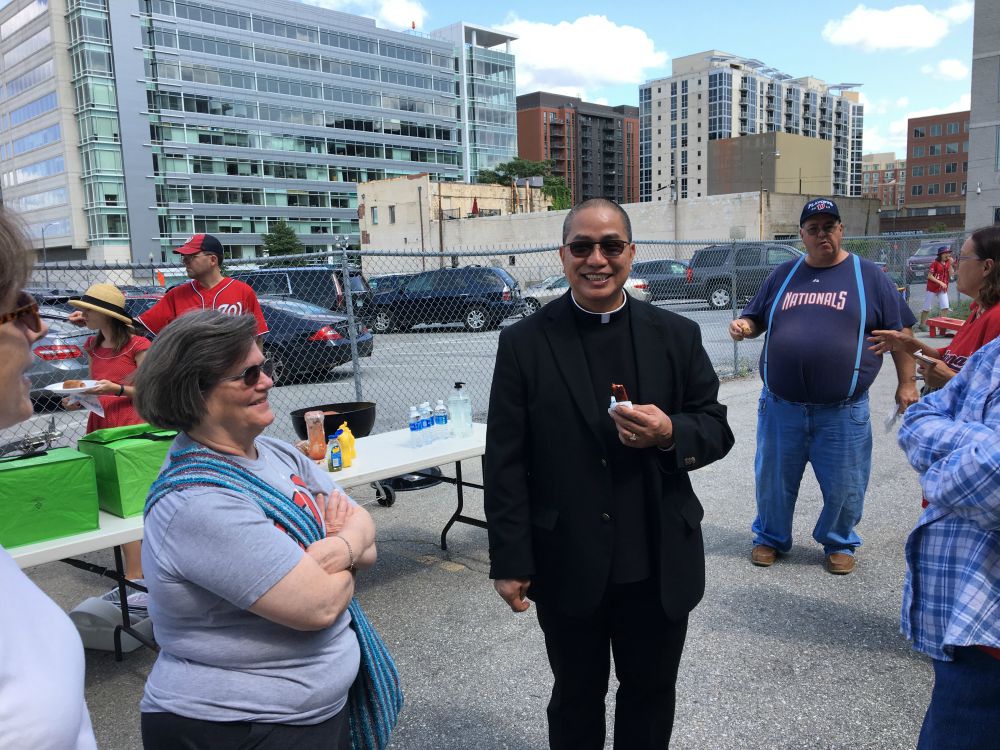 "The very fact that they come to the Mass before, it gives me a feeling of pride," he adds, "that our Catholics think of communing with God before they go to the games."

Mindful that congregants are going to the stadium afterward, Gonzalo keeps the Mass to 45 minutes, routinely asking for volunteer altar servers and playfully telling the eager congregation to sit down because they still have four minutes to wait for latecomers.

"Short sermon today, Father," jokes William Wagner on his way into the church. Wagner came from his home in Arlington, Virginia, across the river; it's his fourth Nats Mass this season. "It's a great idea and they've really done a nice job of preserving this church," he says just before rising for the entrance hymn. One verse, no organ. 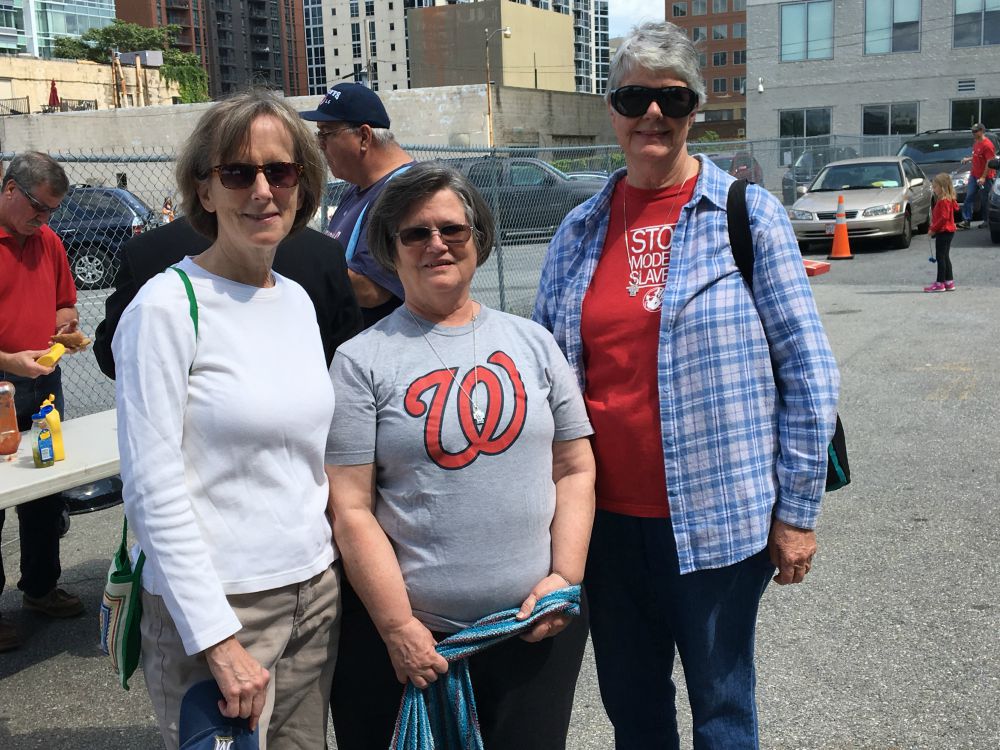 Daughters of Charity Srs. Mary Bader, Maggie Scally and Mary Powers gather after Mass, before heading out to the Nats game. (Julie Bourbon)

Gonzalo moves the Mass along, praying that everyone has fun and goes home with joyful hearts. His sermon is all the more powerful by virtue of being brief. He speaks this day of forgiveness, and teases that he must have a congregation of saints, "because I go to confession and nobody comes," he says. "I am bored."

As the laughter hangs in the air, though, Gonzalo gently suggests that, "We're tired of asking for forgiveness," even as we are ever more in need of it.

This experience is a change of pace for a man who was formerly a member of the Congregation of the Immaculate Heart of Mary Missionhurst, serving Pygmies in the Congo for 17 years. The native of the Philippines, 52, is now a diocesan priest.

His office, adjacent to the church, is a mix of stacked papers and boxes, a recently acquired statue of St. Vincent de Paul (with a bandaged wrist), and a curio cabinet full of crucifixes, statues of Jesus and Mary, and bobbleheads of current and former Nats players. A "NatsMass" jersey, numbered 00, hangs on the back of a chair. The ease with which Gonzalo moves from the sacred to the profane is very much part of his appeal.

"It was great," says Maria Bailey, who, with her husband Mike and five children, of Silver Spring, Maryland, was attending the Nats Mass for the first time. Her 11-year-old son was one of the altar servers. 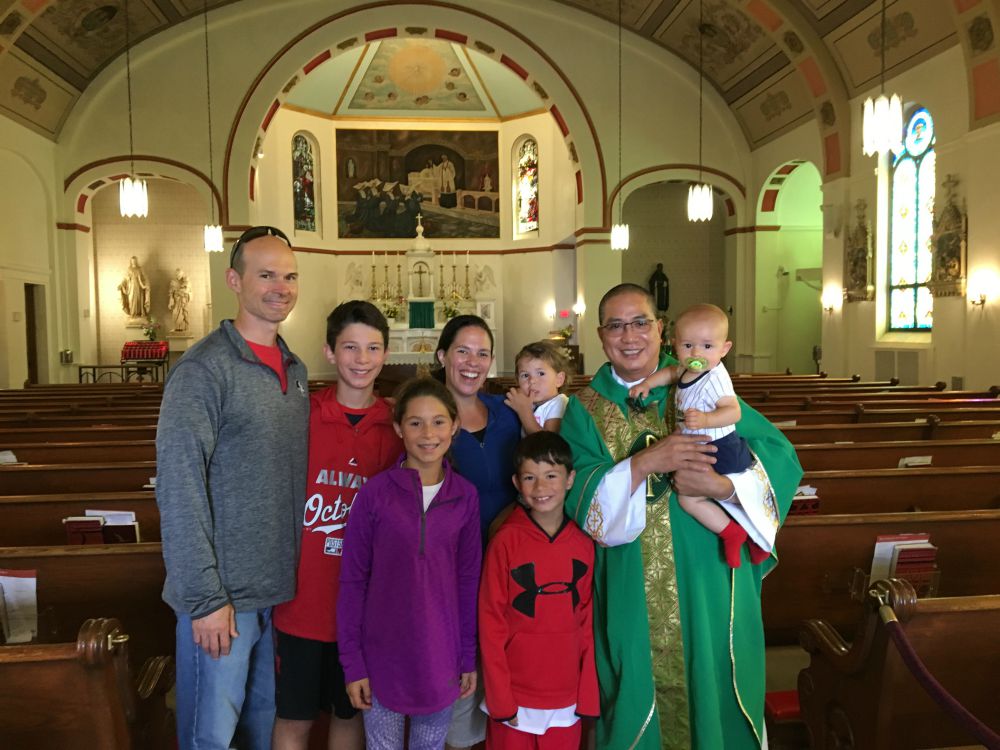 The Baileys chat with Gonzalo for a bit after Mass, saying they hope to come back next season, then they all head to the parking lot, where the Knights of Columbus grill hot dogs to sell with bottled water at far less than stadium prices.

"It was very nice, very welcoming," says Daughters of Charity Sr. Mary Bader, chief executive officer of St. Ann's Center for Children, Youth and Family in nearby Hyattsville, Maryland. "It had quite a bit of charm to it."

Bader, along with two other Daughters of Charity — all baseball fans — was enlisted just before Communion to serve as Eucharistic ministers. It was their first time to the Mass they'd been hearing about. Gonzalo's homily, she says, "was very simple, to the point, and practical."

As baseball wraps up and the Nats head to the post-season, the days of 100-plus losses are over. Like the team, the fortunes of the parish, which was founded by the Josephites in 1903 but has since reverted to the Archdiocese of Washington, have waxed and waned with the times.

Gonzalo notes that the neighborhood's transient residents, many living in pricey apartments, are unlikely to become permanent parishioners. "But that is not an excuse not to evangelize them. We do try to reach out. That's why we created this Mass," he says, giving credit to his predecessor for coming up with the idea.

"That is what we can offer, evangelization. I think this is it," he says, drawing a parallel between his experience in the Congo and what he's trying to do at St. Vincent de Paul. "We go to where the people are and we meet them there."