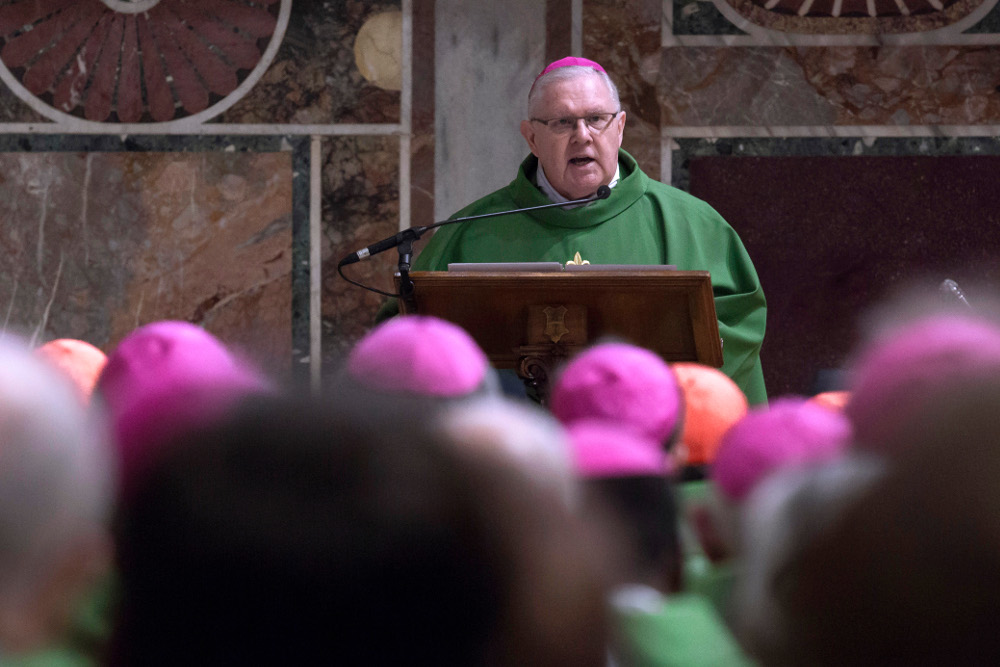 Archbishop Mark Coleridge of Brisbane, president of the Australian bishops' conference, gives the homily during a Mass at a meeting on the protection of minors in the church at the Vatican Feb. 24. (CNS/Maria Grazia Picciarella)

It took a long time — decades, in fact — for understanding of the clergy sex abuse crisis to evolve to a point where it is now widely recognized that the scandal metastasized systemically, the abuse itself a twin evil with a cover-up that was repeated from country to country, continent to continent, in shockingly similar ways by the leaders of the Catholic Church.

Clergy culture or clerical culture are quickly becoming well-worn descriptions of an entity that previously went by the more reverential term "priesthood." That's what we once used when we were referring to the caste of people that we believed indelibly marked as different, in pursuit of holiness in unusual ways and, albeit flawed in some ways, generally above reproach.

If you want a better understanding of why other instincts took over in the Catholic community, why many of us needed a new word, some other way of describing a reality that was becoming increasingly evident over the three-plus decades during which the scandal emerged in distressing detail, I commend the column by Fr. Mark Slatter. "A culture is a network of personal meaning and valuing," he writes. "Clerical culture hinges on leaders attracting similarly disposed persons through the laws of social attraction, evoked in different ways since Plato as the principle of 'like seeks after like.' The psychology engenders webs of kinship among priests, bishops and similarly disposed lay groups, bishops and cardinals, wealthy lay Catholics and think tanks. They always find each other through family resemblance, whatever that happens to be."

My first awareness of the use of clerical culture to describe one of the underlying causes of the sex abuse crisis occurred more than a decade ago while working on a long reporting project for NCR that ran under the banner "The Emerging Church." I began looking around for anyone, especially bishops, who used the term in reference to the crisis. I couldn't find any in the United States, but found a number of instances in which bishops in other countries were beginning to examine how features of priesthood as it had evolved were themselves contributing to the crisis.

One of the most advanced treatments I could find at the time was a 2010 pastoral by Archbishop Mark Coleridge of Camberra, Australia, who played a prominent role in the recent global meeting in Rome of bishops who head episcopal conferences. "I came to think that the problem was in some way cultural," he wrote at the time. "It seems to me a rather complex combination of factors which I do not claim to understand fully, even if I now understand more than I did." He went on to list a series of factors that might contribute from misunderstanding of church teaching on sexuality to seminary training, triumphalism, and a "culture of discretion" that "turned dark when it was used to conceal crime and to protect the reputation of the church or the image of the priesthood."

It is good to see this thread of thought being developed. Taking an unblinking look at their own culture and their role in the perpetuation of this awful chapter in church history will be the most difficult and most profound action the bishops can take. And the only action that outside forces such as bad publicity and lawyers can't force them to do.

Work by people like Slatter, however, might help them arrive at that point of honesty. He writes: "Hierarchical culture is the gold carrot for those predisposed to its allurements. In its crassest forms, it not only seems unbreakable but comes with a breathtaking lack of shame over its paraded grotesqueries of entitlement, aristocratic airs and blind ambition. Ultimately, it's a choice to be a certain kind of human being, for in that mysterious precinct of personal freedom one continues to prefer lesser values such as reputation to higher ones like dignity. One's status in the system is perceived as tantamount to being a servant after God's heart." Give it a good look.

The term "unique" evokes an auto-response from most editors toward the "delete" key. Whatever it is that a writer might think unique probably isn't, but as you'll see we allowed the expression into the story by John Gehring. The Washington Archdiocese earns the designation if for no other reason than that it is the only see in the capital city of the richest and most powerful country on the planet.

Our intent was to provide a thorough profile that the new archbishop of Washington — we're told the naming is imminent but the Vatican never provides a schedule for these happenings — might have at hand when he lands there. As Gehring points out, it's a complex place, what with all the political power and money floating about, lobbyists, pundits, think tanks and, in the Catholic universe, diversity heaped on diversity, spanning cultures, ideologies, ecclesiologies, theologies and those just looking for a nice fit of a community with which to worship.

"I remember looking around church one day years ago and Ted Kennedy was in front of me, Bill Bennett was behind me and Chris Matthews was also there," James Zogby, a prominent Catholic and liberal activist told Gehring. Put that into your homily preparation plans.

Taking an unblinking look at their own culture and their role in the perpetuation of this awful chapter in church history will be the most difficult and most profound action the bishops can take.

In addition to that swirl of power and monied interests and policy wonks and religious and political ideologues, the new archbishop will have to walk amid a church that has seen its two most recent leaders enmeshed in different ways in the sex abuse scandal.

We'll provide a further look at the archdiocese — its less glamorous but no less important side, the church that walks with the poor and marginalized — in a later installment.

National correspondent Heidi Schlumpf profiles another entity that will be keeping tabs on the new archbishop of Washington at close range.

During the past year or so, NCR has been tracking a kind of informal, but alternative structure to the U.S. Conference of Catholic Bishops that has evolved. It emerges from a confluence of think tanks and media outlets, many of them part of the nonprofit arena, funded by big money and quite influential in promoting a very conservative narrative of the Catholic Church in the wider culture.

One of the newer players — a for-profit outfit that sees a much bigger market here than in the United Kingdom — is the London-based Catholic Herald, which recently launched a U.S. edition. It is headquartered in the Dupont Circle area of Washington, D.C., sharing office space with the Ethics and Public Policy Center and the Faith and Reason Institute. Schlumpf provides a detailed and sharply written report.

In this space nearly a month ago, I wrote that few on the planet knew as much about the clergy sex abuse scandal as Jason Berry. I think that claim was thorough backed up by the three long essays he provided that detailed his view of the crisis from the first time he wrote about it in 1985 until the present. One other person who is in that league is Thomas Doyle,  who now refers to himself as an inactive priest. Doyle, who holds a canon law degree among a list of advanced degrees, was working in the nuncio's office in Washington in 1984 when he first heard of the crisis and reacted differently from most of his confrers. He walked toward the crisis, not away from it, and eventually ended up spending much of his life accompanying victims in their pursuit for justice. As has been documented earlier in these pages, he paid dearly at the hands of church authorities for bucking the culture of cover up. But there really are few on the planet who knows as much as he does about the scandal — and from deep inside the clerical culture. He understands better than most the culture's dynamics and why the scandal won't go away.

Berry gave us the most substantial lead up you'll read anywhere to the February meeting in Rome. We'll close off the coverage and commentary next week with a column by Doyle. One final note: It is telling that these two men, who were informing the public and the  bishops of the crisis that was brewing long before any spotlight shined on it in Boston, decades before the Pennsylvania grand jury report, have been, as far as I can tell, remarkably absent from all of the symposia and panel discussions being held far and wide on college campuses and elsewhere, not to mention from the gathering in Rome. We've had them on our pages for years. The church would have been far better off had the bishops and others listened to them a long time ago. They remain voices of authority on the subject.

A version of this story appeared in the March 22-April 4, 2019 print issue under the headline: Bishops must look within their own culture.