A near occasion of cynicism 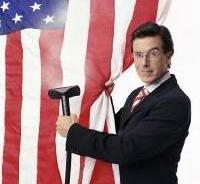 Stephen Colbert: great comedian, or the greatest comedian? I say the latter, but then I'm a die-hard fan. I watch the show, have read the book, bookmarked the site, even bought the T-shirt.

The former "Daily Show" correspondent first caught my eye with his theological humor on the show's "This Week in God" segment. Now I religiously (pun intended) watch his late-night talk show, "The Colbert Report" (silent Ts on both words), on Comedy Central. If you can't stay up until 11:30 p.m. EST, you are clearly not his target market, but you can catch the show online at colbertnation.com the next day.

On the show, Stephen Colbert the fictional anchorman is a caustic, right-wing egomaniac who hates all liberals, defends the pope and regularly insults other religions by insisting that Catholicism is "the one true faith." In real life, Stephen Colbert, the youngest of 11 children, is a self-described Democrat and practicing Roman Catholic who says his parents taught him it was possible to question the church and still be Catholic.

The pseudo-right-wing slant of "The Colbert Report" is just that -- fake. His persona on the show is a parody of blowhard political pundits, in particular FOX News' Bill O'Reilly, whom Colbert affectionately refers to as "Papa Bear." Of course, Colbert's "Threatdown" list of the most dangerous threats to America is regularly topped by -- you guessed it -- bears.

So most viewers understand that when Colbert gives death penalty opponents a "wag of the finger," he probably supports their cause. Or when he agrees with frequent guest William Donahue of the conservative Catholic League, he's really mocking him. Or when he coins the word "truthiness" to refer to those things he "knows" despite evidence, logic or facts to the contrary, he's actually pointing out the problems with today's public discourse.

But does everyone really get the joke? Many college students say their main source of real news is comedy programs like "The Colbert Report," "The Daily Show" and "Saturday Night Live." Both "Daily Show" host Jon Stewart and Colbert insist they are not journalists, but an Indiana University study found that their viewers get as much substance from their shows as from the typical "info-tainment" news their parents watch a half hour earlier.

Researchers disagree on whether "fake news" viewers are less informed than those who consume other media. One study says they definitely are, while several others say the opposite, including one by the Pew Research Center in 2007, which found fake news viewers are more knowledgeable than those who regularly watch "The News Hour" on PBS. For the record, I watch both.

Of course, correlation doesn't mean causation. Those knowledgeable "Colbert Report" viewers didn't necessarily get that knowledge from Colbert. They may merely be educated people who enjoy, and understand, satire.

I enjoy satire as much, or maybe even more, than the average person. I even guiltily laughed at The Onion's post-9/11 coverage ("Not knowing what else to do, woman bakes American flag cake"). But like a parent pushing vegetables, I'm starting to worry about a diet too heavy in fun fake news and lacking in serious news consumption.

So guess who's not honoring you now, Stephen? Me. And I've got a "Wørd" for you: cynicism.

Chronic distrust and suspicion may not be one of the seven deadlies, but I'm not the only one who thinks it's not good for the soul. "The only deadly sin I know is cynicism," said Henry L. Stimson, President Herbert Hoover's secretary of state.

Fake news shows are feeling like a near occasion of cynicism to me. Studies have shown that viewers of "The Daily Show" express more cynical views of the political system and the news media. But again, it's unclear if the show causes cynicism or merely attracts those who are already cynical.

Some have argued that such disillusionment or even contempt could prompt viewers to get more involved in the political process (perhaps explaining the attraction of many younger voters to the idealistic Barack Obama), and that the real responsibility for cynicism rests on those political and media people ridiculed on the shows.

But cynicism can also lead to bitterness or despair, that inability to care that often manifests itself in boredom, escapism and commitment phobia. It's the "whatever" attitude that has come to define a whole generation today. The early monastics called it acedia, and saw it as a spiritual affliction, not a psychological one. Spiritual writer Kathleen Norris describes her own struggle with acedia in her latest book, but she also sees it as a societal problem.

It's not Colbert's fault that millions of Americans prefer sarcasm and end up cynical. But even he shields his kids from his show so they don't begin to see him as insincere. So maybe, good Catholic that he is, Colbert could join the fight against cynicism. Maybe create an "Idealismstrong" bracelet.

Don't make me get out the Atone Phone.

A near occasion of cynicism