A new Jesuit foothold in Vietnam 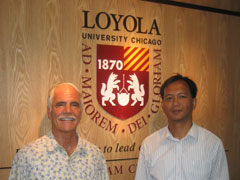 HO CHI MINH CITY, VIETNAM -- Jesuits, we know, don’t always think like the rest of us. Ignatian spirituality can lead people to think -- and plan -- in unique ways, sometimes looking decades, even centuries, into the future.

Such was the case when Jesuits first arrived in Vietnam in the early 17th century. Among them was a missionary named Fr. Alexander de Rhodes who arrived in Hanoi about 1619, and in a mere dozen years mastered the local language, wrote the first Portugese-Latin-Vietnamese dictionary (a move that romanized Vietnamese script), and published the first Vietnamese catechism and Bible.

Meanwhile, the Jesuits won favor with the royal court and are said to have converted, in a matter of years, some 6,000 locals. Even if that figure is a bit high, those early efforts eventually led to millions of converts.

Vietnam today is the second most Catholic country in Asia, with some 6 million Catholics among its population of 90.5 million. Only the Philippines has a higher percentage of Catholics.

Local persecution forced the Jesuits out of Vietnam on a number of occasions, the first in 1630. More recently, in 1975, when the North Vietnamese army swooped south and united Vietnam, foreign Jesuits were again forced out.

In the last dozen years, however, Vietnamese religious are slowly being allowed more latitude by the Hanoi government, and have made contacts with outsiders. Local and foreign Jesuit contacts have emerged.

At the center of this re-emergence is a Jesuit priest named Julio Giulietti, director of the relatively new Loyola Vietnam Center, an educational enterprise of Loyola University Chicago in Ho Chi Minh City.

Giulietti, former president of Wheeling Jesuit University in West Virginia, former director of the Center for Ignatian Spirituality at Boston College, and former director of the Center for Intercultural Education and Development at Georgetown University in Washington, has more than three decades of experience in university education and Ignatian spirituality. Living now in Ho Chi Minh City, Giulietti is the latest Jesuit to have bold plans for Vietnam.

I spoke with him a few months back during a trip I took to Vietnam. Giulietti, a former NCR board member, has traveled to Vietnam dozens of times in the last 16 years, assimilating Vietnamese culture, learning to navigate obscure bureaucracies, and developing many close contacts along the way.

Remarkably, the Loyola Vietnam Center, located in a commercial building in downtown Ho Chi Minh City, initially formed to provide expertise to Vietnamese in the areas of advanced nursing skills, medical and surgical education and small business development, is the first American educational institution of any sort to receive a license from Hanoi’s Ministry of Education and Training.

Nursing and small- to medium-sized business development are currently highly needed skills in Vietnam, but educating in these areas, in Giulietti’s vision, is just a starting point. Eventually he would like the center to be educating in the humanities as well.

“Then you’re obviously going to have a spiritual, religious and humanistic presence,” he said. “We may not directly speak about that in Vietnam at the moment, but it’s going to be there. … We have been granted a license to teach as an American institution of higher learning and we need to show ourselves trustworthy and establish our educational credibility.”

Patterned after Jesuit institutes in Rome and Beijing, the Loyola Vietnam Center represents the latest effort to spread Ignatian spirituality in colors that match the possibilities and needs of a quickly growing nation.

“One of the profound aspects of growth and development in the human mind and heart is knowledge,” said Giulietti. “Not just intellectual and cognitive knowledge, or knowledge about how the world operates, or skill or something that would lead someone to be a leader, but also the knowledge of how to ask the right questions about who I am as a person, not only my name, address and family name, but how do I think and feel about myself. What brings me joy in my life and in what way have I received the grace of God that has led me to experience the gifts that I have?”

The Loyola Vietnam Center has grown out of the visions of Giulietti; Jesuit Fr. Michael J. Garanzini, president of Loyola University Chicago; and Patrick Boyle, associate provost at Loyola Chicago. All are notably global thinkers who see the value in providing value-oriented education, in forming global leaders.

“I have to be careful that I’m not doing anything overtly religious,” Giulietti told NCR. “Especially with the Vietnamese people, because the authorities would assume wrongly that that’s really what the center is trying to do, to be a subversive religious entity. That’s not it. The best way for us to be ‘spiritual’ is to treat all we encounter with respect and a willingness to learn from them. That is especially important in the educational environment in Vietnam. It’s the quality of a person’s life that we need to celebrate in all the ways we encounter it.”

If the fullest formation of the person is the goal, the first step for Giulietti was listening carefully to the local people to hear about their most pressing educational needs. He says he did not come to Vietnam to be the latest person to impose a program that people don’t want. His listening and discernment led him to focus on nursing, community medical care, and small business development, three areas of expertise clearly needed in Vietnam today.

Giulietti says he first reached out to some Vietnamese doctors he had come to know and they connected him to hospitals and universities that have nursing programs that were willing to engage with an American university.

“They opened the door for us. We brought in from Loyola Chicago five nursing instructors, a physician and a basic scientist here about a year ago,” he explained, saying the intention is not to teach classes as much as to instruct local professors and teachers.

Giulietti explained how he is filling in needs when he encounters them. For example, Vietnam has cancer institutes in Hanoi and Ho Chi Minh City, but none in central Vietnam. So his center has begun working with a Vietnamese doctor, trained in the United States, who works in the field of cancer treatment in the central Vietnam city of Da Nang.

Funding for the Loyola Vietnam Center, like other creative organizations, is evolving along with the scope of its work. It receives support from Loyola University Chicago and is reaching out to foundations and some Vietnamese people who share the Ignatian educational mission.

At the moment Giulietti’s operation is large on vision and still modest in scope. Besides him, there are three other full-time staff members at the center. Meanwhile, partnerships are growing, he says, and an “adjunct” staff is taking shape little by little.

While the center operates out of several rooms on one floor of a building, Giulietti sees it growing within a couple years to take the top two or three floors. Another phase in the center’s life will be to increasingly join its mission with the Loyola University Chicago study abroad program.

It will require more networking with local officials, he said.

“You know, 10 to 20 years from now when there could be a Vietnamese person sitting in my chair, they’ll have a large staff and will be very well-known, and the Loyola Vietnam Center will begin to look like the center in Beijing, because it will be doing something very important for people. I’m proud of Loyola University Chicago for investing in us to do this work.”

A new Jesuit foothold in Vietnam