At the International Rescue Committee, a humanitarian aid, relief and development organization, Rachel Taber and Doug Hewitt spent their days doing everything they could to make a refugee's resettlement to the United States easier and more welcoming. But the job was "heartbreaking," as Taber and Hewitt felt they were unable to get refugees the support they needed or the jobs the two of them thought the refugees deserved.

Refugees often face barriers that they can't control, Hewitt said. Beyond barriers of language and culture, employers are often wary of people being from cities they've never heard of or having degrees they haven't seen before, according to Hewitt.

"Even people that I would think in my head, 'If I had a company, I would hire this person right now,' " Hewitt said. "But for some reason the employer would find a reason not to hire them."

Taber and Hewitt then got the idea to start the 1951 Coffee Company, a coffee shop in Berkeley, California, dedicated to hiring and training refugees to be baristas.

"We wanted to be the employer we wanted to see in the world," Taber said.

Nonprofits centered on coffee and refugees have started popping up across the U.S.

Like 1951 Coffee, Refuge Coffee Co. in Georgia is a coffee shop run by refugees. And 734coffee’s coffee beans are grown and harvested in Gambela, a part of Ethiopia where more than 200,000 South Sudanese citizens have taken refuge. Even Starbucks has made a global commitment to hire 10,000 refugees by 2022.

For Taber and Hewitt, it was an unexpected political climate that brought 1951 Coffee into the spotlight.

The company was founded in 2015, but its first training workshop wasn't held until 2016 and the first coffee shop opened January 21, 2017 — the day after President Donald Trump was inaugurated, not long before the Trump administration scaled back the refugee program and put in place a travel ban.

"And that was our moment," Taber said. "The timing of this perfect storm coming together, where people wanted to show their support to the refugees."

Taber said they had lines out the door and tons of media attention. She laughs now, but with a staff of 10 baristas, six of whom had been in the country for only two months, it was overwhelming.

But it's that kind of community support that has allowed them to grow.

The company currently has two coffee shop locations in Berkeley, the latest opening in early August on the University of California, Berkeley campus. They also have a third shop planned to open in fall 2018*.

The growth has allowed 1951 Coffee to continue to hire more refugees.

"It's not just work," Merhawit Temesgen said. "It's like [a] second home."

Originally from Eritrea, Temesgen came to the United States four years ago but only started working as a barista at 1951 Coffee this past summer, before the school year starts again. Temesgen is currently studying electrical engineering and computer science at at Berkeley.

She isn't just learning how to make coffee, she's learning everything she can from Taber and Hewitt. After she graduates she wants to use her degree to encourage other women immigrants and refugees. 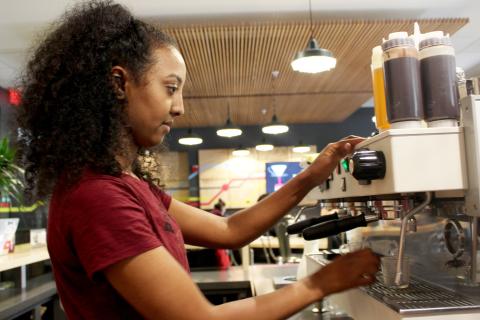 Merhawit Temesgen, a refugee from Eritrea, works as a barista at 1951 Coffee. (Heather Adams)

"From them I've learned that the little things you do could change the problems you see," Temesgen said. "So they have empowered me to make a change."

Taber and Hewitt have started receiving calls about expanding all over the United States and even before they opened their first shop, one of their own board members asked when they plan to go national. Taber said they were so stuck in the day-to-day, it was impossible to think about expanding outside of the Bay area.

The accelerator program at Miller Center for Social Entrepreneurship is a free program specifically designed to help companies focused on refugees expand and grow.

"For a number of years, I had assumed that some of the most pressing problems of poverty on the planet were out of reach of social entrepreneurial approaches, refugee and migrant workers among them," Thane Kreiner, Miller Center's executive director, said.

Kreiner said he was pleasantly surprised when the program received more than 100 applications. Twenty-one were selected and each given two Silicon Valley executive mentors and a structured set of lessons to help create a strong business model with the end goal to be "investor-ready," Kreiner said.

For 1951 Coffee, there was no better mentor than Louis Jordan, former senior vice president of corporate finance at Starbucks. He was sold on the idea from the beginning but the true test, he said, was if the company made good coffee.

"Once I visited, I knew they could do that," Jordan said.

Then it was doing the work of making sure the company can keep that quality as it expands. For example, he said, if you go to any Starbucks in the country, you know what you're going to get. He wants that same thing for 1951 Coffee.

"For me, as long as you're able to start with really, really great coffee and you're able to expand that coffee platform and keep it at a consistent quality level," Jordan said. "That's the key thing."

Although, the coffee shops are able to give a number of refugees permanent, living wage jobs, it's 1951 Coffee's training program that is the heart of the company.

It currently has two training facilities, one in Oakland, and thanks to a $63,000 "Opportunity for All" Grant from the Starbucks Foundation, the company was able to open a second location in San Diego, California.

Taber said the kinds of jobs refugees are typically able to get are part-time and "4Ds" — dull, difficult, dangerous and dirty. The State Department requires refugees to be economically self-sufficient within six months of arrival to the U.S.

"It's nearly impossible to make that," Hewitt said, which is why their training program is set up to get refugees out of "4D" jobs and accomplishing the State Department's goals.

The free training program is only two weeks long, allowing trainees to get to work almost immediately. It's infused with English language skills, information about U.S. culture and how to adapt to a new environment. Plus, Taber and Hewitt know refugees are often booked with appointments where they have to go fill out documents at certain offices during their first few weeks in the country, so the program is only held in the mornings.

"That way when they've finished our two-week training program, they have something to add to a resume, add to a job application that's here in the United States," Hewitt said. 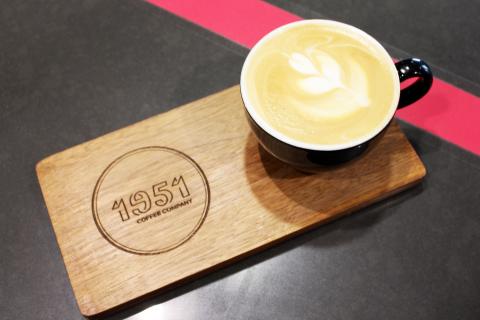 A cappuccino is ready to be served at 1951 Coffee. (Heather Adams)

1951 Coffee's training program goes one step further by inviting coffee industry employers to a mock cafe session to see the trainees in action. Taber and Hewitt said this kind of program works and that almost all of their trainees get hired.

After his training program, Ali Fayaz was originally hired to work at a cafe at the Dropbox headquarters in San Francisco. But when a management position opened up at 1951 Coffee, he returned.

"It just showed me the way, that I can have a future in this." Fayaz said. "It means a lot for me. This is the best thing that I ever chose."

Taber and Hewitt credit their success to a lot of help — even beyond the Miller Center and Jordan. It was everything from Taber's church, First Presbyterian Church of Berkeley, giving them the space to open their first cafe for cheap to both Taber and Hewitt's churches helping them find donations and volunteers to build and set up the first coffee shop and training center.

"We could not be where we are today without the faith community helping us," Taber said.

Reath is one of the approximately 20,000 Sudanese children known as the "Lost Boys" of Sudan. After living in refugee camps for 13 years, he arrived in the United States about 11 years ago.

When Reath started 734coffee, he looked around at what those in Gambela could realistically do — it came down to making clothes and coffee.

"But how much clothes can you buy?" Reath asked. "I feel like the best thing that people relate to would be coffee."

Deciding how to help other refugees was easy. He saw the daily struggle of people unable to pay for education in the refugee camps.

"No one will ever take my education away from me now," he said. "Education is the key to success in this global world."

His biggest fear is failing, feeling that he will let down the refugees he longs to help, which is why he's soaking in every bit of information through Miller Center's program.

Both coffee companies have to be what Kreiner calls "investor-ready" by October when they'll present to investors and other cohort participants at Miller Center's Social Entrepreneurship at the Margins Showcase. But both companies are already thinking far past October.

For 734coffee, it's all about getting recognition. When people see 734coffee, Reath wants them to think of refugees.

For 1951 Coffee, it's all about expanding training, providing more jobs and increasing advocacy work.

On World Refugee Day, 1951 Coffee invited 150 community members, including Miller Center mentor Jordan, to their cafe. Attendees were given an identity of someone new to the country and in 25 minutes went through a mock experience of what the first month in the United States looks like for a refugee. Former program trainees ran the stations and purposely refused to speak English or hand participant's forms in English.

"It was confusing, it was chaotic," Taber said.

The goal was for participants to pay rent at the end of the "month." It was nearly impossible. But that was the point — it was eye opening.

Baristas also give talks on the Berkeley campus and the cafe hosts talks, recently welcoming one of the last remaining Holocaust survivors, Sylvia Ruth Gutmann, to speak about her memoir, A Life Rebuilt: The Remarkable Transformation of a War Orphan.

"For two people to have this kind of impact," Jordan said. "It's extraordinary."

*This sentence has been clarified that a third shop is planned to open with no specific location finalized.