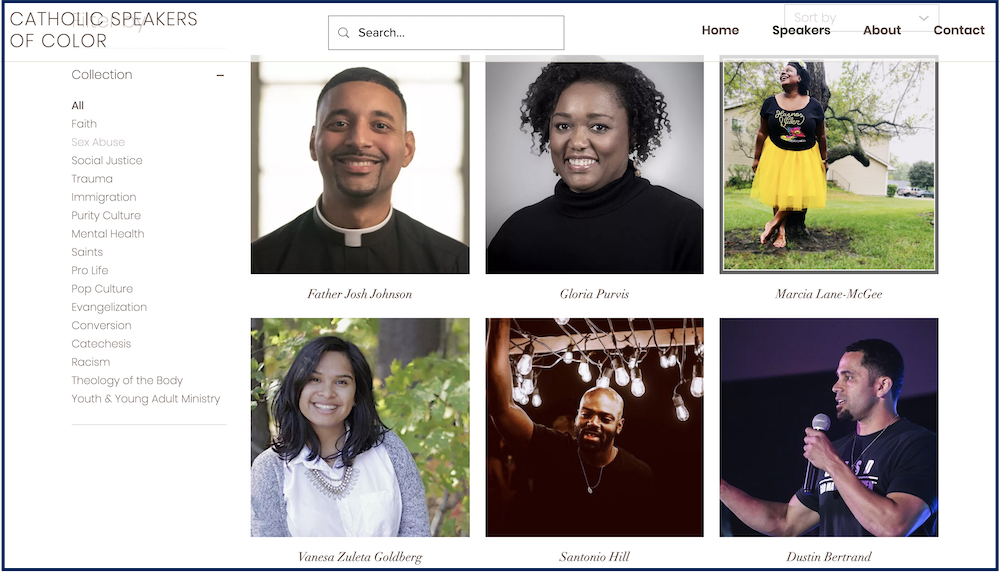 After learning about her own family's intergenerational wounds from racism, Leticia Ochoa Adams began to see the Catholic Church's complicity in racism and set out to change the church's narrative when it comes to issues of race and social justice.

Last October, the writer and mother founded the new website, Catholic Speakers of Color, which aims to help conference organizers find a more diverse array of Catholic speakers. The online platform features 53 speakers, including Adams, who represent a variety of ethnicities and skin tones.

"In Catholic speaking and writing circles, it's who you know that gets you jobs," said Adams. "For Catholics of color [in the U.S.], we are so spread out. Every space in Catholicism is either white or Hispanic. And for Hispanics, you can either speak at an all Spanish [language] platform or be the token Hispanic in white spaces. And Black Catholic speakers are so isolated from each other."

In addition to providing a service to organizations looking for speakers, the list has become a source of community and encouragement for those on it. "I know several people on the list who when they feel overwhelmed, just scroll through the list and remember 'I'm not alone,' " Adams said.

All of the speakers must submit a letter of good standing to be added to the website, but the speakers represent a variety of political opinions. "We all have different stories and different reasons for being Catholic … just like white people," she said. 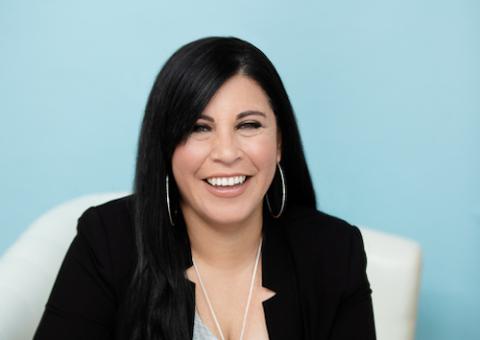 Vanesa Zuleta Goldberg got involved with the website after connecting with Adams over social media. "As a young adult who grew up specifically interacting with youth ministry spaces, to see a website that highlights the gifts of people who look like me means so much," Goldberg said. "To know that BIPOC  [Black, Indigenous and people of color] have a space where we can be properly represented is a huge step forward in ministry circles."

Though Shannon Schmidt, who met Adams through the "Rend Your Hearts" novena campaign, hesitated to add her name to the website at first, she started to see that the rapidly growing list of "inspiring, knowledgeable men and women" Adams was bringing together was due to "the Holy Spirit moving through the church as only the Spirit is capable of doing."

The website has opened new doors for Schmidt's ministry, she said, noting that she has been asked to write for new publications, join panels for virtual events, and connect with a wider network of Catholics who are people of color, Black and/or Indigenous. The website has also helped her to "find a group of women of color and white allies committed to amplifying diverse voices with whom I can share my spiritual journey."

Having a sense of community "has been a ballast in the midst of this pandemic, recent political upheaval, and discord over racial justice in the church," Schmidt said, adding that she is grateful for other members who are "companions on the journey of discipleship."

"They have been the hands and feet of Jesus a real way and have kept me tethered to Christ and to the sacraments," Schmidt said. "I am so grateful for the way that the simple act of adding my name to a list has become a significant moment of encounter with Jesus Christ."

Adams, who identifies as Tejana*, grew up in Texas and recalls that her experience of learning English was marked with xenophobic and racist trauma, as she was punished for speaking Spanish and threatened with being put in special education classes. One teacher paddled her for speaking Spanish to a janitor.

Looking back, "it makes me realize the internalized racism that I had," she said.

Although baptized Catholic as a baby, in junior high school she became a devout, "Bible-thumping" missionary. "I'm a natural radical. When I see truth in something, I jump all the way into it," Adams said. She remembers collecting tracts and carrying around her Bible at her junior high school so she could quote Scripture to her peers during lunch.

But a series of tumultuous events led her away from her missionary impulse. She faced repeated emotional and sexual abuse during her teen years, gave birth to her first child at 16 and got married for the first time at 19 to a man she barely knew. After having three more children and miscarrying one, her husband's drug addiction drove them apart. They were divorced after eight years of marriage. After her second marriage, she wanted to settle down so she moved to the suburbs with her family.

She describes her reversion to Catholicism (what her former church community told her was the "whore of Babylon") in 2010 as a "joke of God," attributing it to the omnipresence of Marian images in her family members' homes. "There's something about being in a house with 40,000 Mary statues … she tilled the soil for me."

She describes how she found healing from her sexual abuse in the Catholic Church, namely in the Catechism of the Catholic Church and the writings of Catholics like Edith Stein, John Paul II and Teresa of Avila. It was reading the saints that changed her "us versus them" mentality. The saints showed her that we are all sinners, all broken and wounded, and in need of Christ's healing love.

After her eldest son died of suicide in 2017, Adams discovered the stories of past family members who dealt with mental health difficulties and began to realize the generational trauma brought on by colonialism. Adams' great-great grandfather, who was half white and half Indigenous, was raised by his white grandmother, a Mormon who hated Native Americans, and was sent to a Mormon school where he learned English.

"That trauma got passed down generations," she said.

Adams also learned that another distant relative was won by a Spanish soldier in a poker tournament when she was 14 years old, and she died by suicide.

"I started to realize how much that trauma … colonialism, oppression, subjugation has to do with my life and my child's life."

She also saw racism in the pro-life movement, where she observed how crisis pregnancy centers were more likely to tell women of color about the benefits of adoption, while encouraging white women to raise their children.

"As a Latina and having raised three children born of crisis pregnancies, this bothered me," she said, but she got push-back when she raised the issue. "No, I don't think 'everything is racist.' I just know what it feels like to be the person on the other end," she said.

Adams' approach to social justice is firmly rooted in the church's social teaching and in the Gospel. "I always point people to the Gospels," she said. "Universal healthcare is not a 'socialist issue.' It's Catholic. It's a matter of not exploiting human beings."

She believes that if the church doesn't show how Catholicism speaks to social issues, "young Catholics, especially young Catholics of color, will go to the far left or far right."

For this to happen, there needs to be a change in narrative amongst Catholics. For most, being pro-life and anti-racist are two separate issues. For Adams, "You can't be one or the other. It's both/and. It's not about being left or right. It's about being Catholic."

Though she admits that it's scary to know that she will not save the world, she insists that it all starts with cultivating the spiritual life and paying attention to the small things. She describes herself as being in a "constant conversation" with God, asking him what to do each day. An avid reader, she's found great consolation in the catechism and writings of Thomas Aquinas, and is finishing a bachelor's degree in philosophy at a Catholic seminary.

"I've realized how much knowledge is a gift that God gives us to know him better." She offers all of her writings and speaking engagements to God, "to do what he wants with them … to let them land in the inboxes and Facebook feeds of whoever needs to see them."

Most importantly, she makes it her mission to focus on "what's on God's to-do list for me, and not on mine. It's not my responsibility to make it all work out. … He's more than capable of handling it. God doesn't need my opinion on what to do, and I know he won't leave me alone if he wants me to do something."

*This story has been updated to correct Adams' ethnic identification.