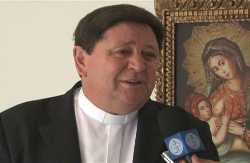 In his first interview for the American media since being named as the Vatican’s new top official for religious life, Brazilian Archbishop João Bráz de Aviz has signaled that he’s open to dialogue with women religious in the United States about the on-going Apostolic Visitation, saying he recognizes that whenever higher authority in the church intervenes, there’s always a “problem of trust.”

The 63-year-old prelate, who expects to take up his new Vatican post in mid-February, spoke to NCR by phone from his residence in Brasilia on Jan. 7.

Bráz de Aviz candidly acknowledged that he doesn’t understand English and has never travelled in the United States, so he has “a great deal to learn” about the situation facing women religious in America. He said that sometime in the next few days, he’s planning to meet in Brasilia with Mother Clare Millea, the American sister in charge of the Apostolic Visitation.

Bráz de Aviz was tapped on Jan. 5 as the new Prefect of the Vatican’s Congregation for Institutes of Consecrated Life and Societies of Apostolic Life, replacing 76-year-old Slovenian Cardinal Franc Rodé.

In his conversation with NCR, Bráz de Aviz spoke about his background and his broad perspective on church affairs – in particular, an emphasis on unity and seeing things through other people’s eyes which he said he acquired through a “long and very deep friendship” with the Focolare movement.

The interview took place in Italian, which Bráz de Aviz speaks fluently as a result of having studied in Rome at both the Gregorian and Lateran universities. The following is an NCR translation of the conversation.

NCR: When did you learn of your appointment, and when will you be on the job?

Bráz de Aviz: I learned about it on December 14. I was here at my house in Brasilia in the evening when Cardinal Bertone, the Secretary of State, called me to tell me about it. I’m planning to arrive in Rome sometime in mid-February, but the precise details haven’t been worked out yet with Rome. I need a little bit of time to finish up some things here in my archdiocese.

You don’t come from a religious order, but do you have experience of religious life?

t
For one thing, I attended a minor seminary here in Brazil, in Assis, run by an order called the Pontifical Institute of Foreign Missions, the PIME fathers of Milan. I was a diocesan seminarian there from 1958 to 1964, and I received a wonderful education from them. Beyond that, I’ve developed many contacts with both men and women religious through the Focolare movement, which has a department dedicated to religious orders. I’ve had a long and very deep friendship with the Focolare.

How did that friendship with the Focolare develop?

t
When I was 16 years old, believe it or not, a Cubist painter who was part of the Focolare movement came to our seminary to give a talk, and from that point on I just fell in love with them. It came at an important moment for me, because it was a time when the great ideologies were taking off in Brazil. The theology of liberation was being born, which had this incredibly beautiful concern for the poor, but which was also sometimes heavily ideological. We young people were very attracted to it, and the Focolare gave me the right sense of balance.

Many would say the same thing about the Community of Sant’Egidio – that it too has a “preferential option” for the poor, but it’s an option of faith rather than ideology.

Yes, exactly, and I’m also a friend of Sant’Egidio.

Brazilians have told me that you don’t come to your new Vatican job with a strong agenda, but with a willingness to learn. Is that right?

t
I think that says it very well, and it’s the same thing I’ve been telling people these days. First of all, I don’t bring any careerist sense that this is a personal promotion. In my heart, I see this as a service to the Holy Father and the church. We’re supposed to be brothers and sisters in the church, so we have to give of ourselves in service.

Beyond that, I have to confess that I don’t even know much about the congregation I’ll be working in, so I have a great deal to learn. I have to walk together with those who are already there, with the people who know this field very well, because it’s a huge and very specialized area. In the main, my impression is that the Holy Father is content with the work that’s been done, so I don’t think I’ve been chosen to make immediate dramatic changes. I think I was chosen in part because the Holy Father wants a Brazilian in the Vatican, since at the moment there’s no other Brazilian holding a senior Vatican position.

In the years since the Second Vatican Council, some observers have spoken of a “crisis” in religious life. Do you see a crisis?
t

I think there are certainly signs of difficulties, such as the decrease in vocations. Many orders, many congregations, have seen a significant diminishing of vocations. We have to be attentive to what’s happening, to try to understand what the problems are.

We also have to recognize that the great changes in the culture in our time effect religious life. We live in a very different world than the one in which we grew up. For example, globalization is a reality that we haven’t succeeded in governing effectively. We have to ask how, in this new world, a strong commitment to consecration before God can still make men and women happy, since there are so many other things in the culture that promise happiness.

The question that Vatican II wanted to ask the religious orders is still a valid one: Is the light, the inspiration, that God gave to the founder of the order still a living force in the order today? What’s needed so that the nucleus of that inspiration penetrates this new world, and so that the order remains faithful to the light that shines from the founder?

Beyond crisis, do you also see signs of hope for religious life?
t

There are so many! Every charism given to the church is a seed of the word given in a particular moment in time. In order to help them persevere and grow, it seems to me, we need to accompany them – not with authoritarianism, but with mercy and fidelity.

Some would say that many religious orders have become overly “progressive” since Vatican II. What’s your view of that?

t
I would say that many orders have been trying to seek a new light, a new way of responding to changing circumstances, and that’s good. Sometimes, however, it’s my impression that they don’t attach enough importance to the orientations of the Holy Father concerning how to go about that. I remember in 1980, Cardinal [Bernard] Gantin came to Brazil to give a couple of orientations to the doctrine committee of the bishops’ conference on liberation theology. The bishops received those orientations very well, but that wasn’t always true of the theologians. I believe we need the orientations provided by the Holy Father, which we ought to see not as an imposition of authority but as a kind of light for perceiving what God is asking of us. If we don’t have that vision, it’s easy to become overly focused on our own individual circumstances and miss the larger context.

Do you know the United States?

t
Not really. I understand very little English, and I’ve never travelled in the United States.

You’re aware of the Apostolic Visitation of religious women in the United States?

t
I’m aware of it, because I recently spoke with Mother Clare Millea, the American sister who’s in charge of the visitation. She’s coming to see me here in Brasilia sometime in the coming days, in part because we also have to talk about her congregation [Congregation of the Apostles of the Sacred Heart of Jesus]. Beyond that, I really don’t know anything at all.

Are you aware that many sisters in America are concerned because, to them, the process seems “secret,” and they’re worried that they won’t have an opportunity to respond to whatever the conclusions might be?

t
I’ve heard that from the sister who spoke to me. I haven’t read anything else about it, so I’ll have to learn once I arrive at the congregation in Rome.

Are you open to talking to the American sisters about how to make this a constructive experience?

Of course. What the Holy Father wants is fidelity to the consecrated life, but we also have to be in dialogue with the world and all the other things that women religious strive to do. I would say that “secrecy” is not the spirit of this intervention. You know, whenever a higher level of authority in the church intervenes, they’re doing so because they have a responsibility to carry out a mission, but there’s often a problem of trust. I want to create trust – I believe in that very much. We have to get past this vision of seeing one another as enemies, believing that the ‘other’ is somehow far from God or a threat to me.

I learned that vision from the Focolare. They taught me that I always need to try to understand the path that the other person is on, how they see things, and to learn from it. It’s very important to find the good in what other person thinks and feels, not to condemn it or try to destroy it. It’s a spirit of unity, which we have to construct together. For me, there is no other path. By the way, I have a great relationship with the religious here in Brazil, including the national coordination for religious orders.

So you’re open to dialogue with the religious women in the States?

t
Yes, I want to learn from them and to walk with them. You have to see people up close, get to know them, which helps you overcome whatever problems are there. I would say the same thing about the sexual abuse crisis that we’ve lived through in recent years. We have to be concerned with the holiness of the church, but we also have to be very close to those who have been wounded, to the victims. I’m passionate about that.

Do you know Archbishop Joseph Tobin, the secretary of the congregation?

t
No, I haven’t spoken with him yet.

I realize it’s still a work in progress, but overall, how would you describe your vision of religious life?

t
I’d put it like this: Every congregation, every order, in the church is like a beautiful flower. Together, they make up a garden, and we have to be concerned not just with the individual flowers but with the garden as a whole. What’s the relationship among the various charisms? Do these flowers have the capacity to see the beauty in the others? In order for the garden to be healthy, the flowers have to grow together. That’s another way of talking about the balance between unity and diversity, which can be difficult to achieve in a heavily individualistic culture, where everyone wants to make their personal vision of things the rule for everybody. Instead, we have to be governed by the rule of charity, and I think that’s something we have to re-discover in the church.