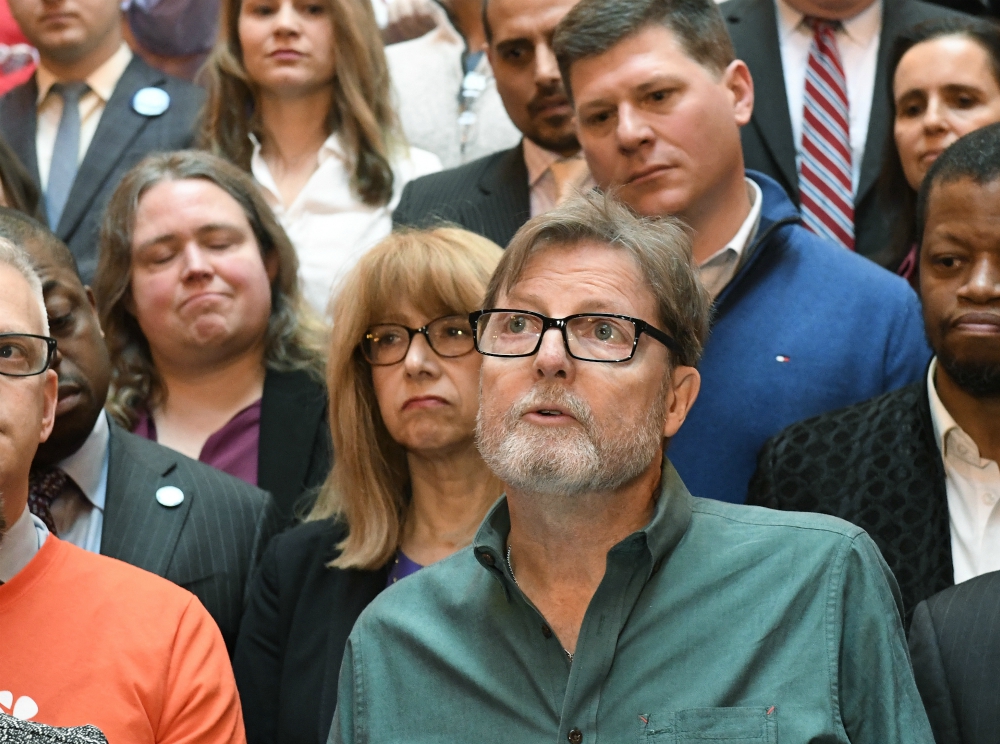 Brian Toale speaks while standing with New York legislators, survivors and advocates in favor of the Child Victims Act at the state Capitol in Albany Jan. 28. The state legislature approved changes to the statute of limitations for sex abuse victims that day. (AP Photo/Hans Pennink)

They finally got a yes.

After more than a decade of lobbying, advocates for changes in the New York state statute of limitations found out Jan. 28 that the state legislature approved what they had long wanted.

Both the State Assembly and State Senate approved changes in the Child Victims Act, allowing sex abuse victims to sue and file criminal charges until they reach the age of 55, and opening a window for suits for up to a year for those previously frozen out by the current law. Currently, lawsuits are limited to those under the age of 23, one of the more restrictive in the country.

For Brian Toale, who says he was abused by a lay Catholic high school teacher on Long Island in the early 1970s, the changes were both startling and welcome.

"All of a sudden, it swept through, as soon as the Democrats were in control," he told NCR.

He said it was difficult to recognize that the goal he had fought for seemed to be accomplished. "All of that energy, all of this focus, then the bottom fell out," he said.

Toale has been lobbying for the proposed legislation, which has long been opposed by the state's Catholic bishops. Changes in the statute of limitations on sex abuse had been successfully killed in previous years by the Republican-controlled State Senate. Toale would make frequent journeys along with fellow survivors to Albany, a 280-mile roundtrip from his Manhattan home, to make his case.

Finally, in the aftermath of midterm elections, Democrats took total control of state government and moved toward support for statute of limitations changes.

The bishops agreed to support the legislation when it included provisions that would also cover public entities. Gov. Andrew Cuomo is expected to sign the bill.

The bishops had long argued that the legislation was unfairly targeting religious institutions by leaving public schools and other government entities freed from its provisions. They also said that it would cripple the state's dioceses and drive them into bankruptcy, affecting the church's social and education ministries.

Toale expects to sue Chaminade High School in Mineola, Long Island, where he attended in the early 1970s, which he said employed a lay teacher who was a sexual abuser.

The lay teacher is now deceased but worked at Chaminade, a private Marianist high school, for two years. Toale said he would look for compensation for 30 years of therapy. Through the legal discovery process opened up by the new legislation, he would like to find out who authorized the employment of his alleged abuser and how the offending teacher was hired in the first place. He would also like to know how many students were victimized and what the school leadership knew.

Toale is not covered by compensation programs authorized by a number of dioceses in the state, including the Rockville Centre Diocese where Chaminade is located, because he was not abused by a cleric and a religious community operates the school.

The New York Archdiocese and the dioceses of Brooklyn and Rockville Centre have each initiated a compensation program, administered by an independent arbitrator, that compensates those who were victimized by diocesan priests or deacons. The upstate diocese of Syracuse followed with a similar program. Millions of dollars have been awarded, including $40 million from the New York Archdiocese alone. Survivors who receive awards agree to give up future claims.

One result of the new legislation is a political chasm between Cuomo, who is a Catholic, and the church. Cuomo's support for legislation that would extend abortion rights in a way that its opponents describe as infanticide, coupled with his acerbic remarks directed at the state's bishops after the legislature approved the statute of limitations changes, have created a groundswell of opposition from some Catholics.

New York Cardinal Timothy Dolan said he is regularly pressured to formally excommunicate the governor, a stance he has decided against, arguing that it would only benefit Cuomo politically.

Cuomo's late father, Mario Cuomo, another New York governor, also had a long-running feud with Catholic bishops, which culminated in his 1984 address at the University of Notre Dame during which he defended his political position supporting abortion rights.

In a New York Post opinion piece headlined "Why are Cuomo, Democrats alienating Catholics?", Dolan asked of Andrew Cuomo, "Why did he reduce the sexual abuse of minors, a broad societal and cultural curse that afflicts every family, public school, religion and government program, to a 'Catholic problem'?"

While New York advocates for sex abuse survivors applauded the new legislation, one advocate said he is taking a wait-and-see attitude.

"Nothing really matters until something is actually passed, signed and put into law," said the advocate, requesting anonymity because he was reluctant to comment on legislation that has not been formally enacted into law. He said he did not want to raise the hopes of New York sex abuse survivors who could benefit from the changes.

California passed a one-year window allowing sex abuse lawsuits in 2002. The result was $1.4 billion in successful claims against Catholic dioceses in the state.

The issue was revisited in 2018 when the California legislature voted to allow claims of childhood abuse for those up to 40 years of age, plus a five-year window for those who repressed memories of past sex abuse. However, then-Gov. Jerry Brown vetoed the bill, arguing, "There comes a time when an individual or organization should be secure in the reasonable expectation that past acts are indeed in the past and not subject to further lawsuits."

"With the passage of time, evidence may be lost or disposed of, memories fade and witnesses move away or die," he added.

But Cuomo has long been a public backer of changing the statute of limitations and the general consensus is that the legislation will become law. Toale, for one, is confident that the new law will be signed by Cuomo and enacted.

"It's not all about the compensation, although for many people it would be helpful. It's about getting your life back," he said.

[Peter Feuerherd is a correspondent for NCR's The Field Hospital series on parish life and is a professor of journalism at St. John's University, New York.]