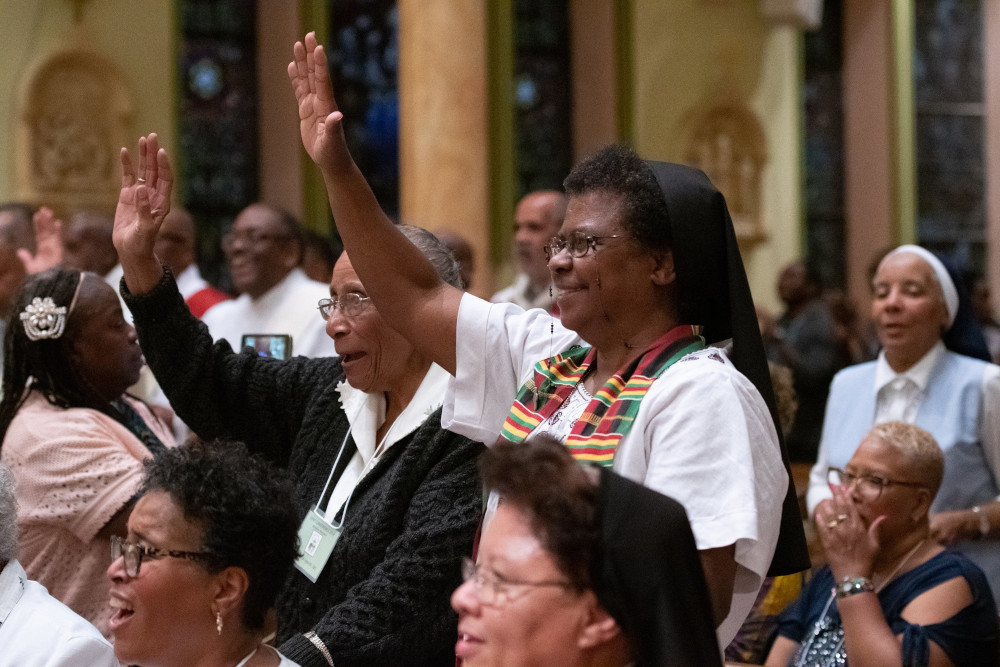 The National Black Sisters' Conference issued a "clarion warning" to U.S. Catholics saying church members and leaders have not done enough to speak out against the sin of racism.

"In this moment of dual life-threatening pandemics; COVID-19 and racism, the voice of the church in America is, for the most part, eerily silent when it comes to the racial unrest in this country," said the Sept. 16 statement by the national organization of more than 150 Black Catholic women religious and associates in the United States.

The group said they felt compelled to "hold up the light," referring to an old spiritual with the same title, where light is held aloft to "expose the darkness of evil and sin, thereby destroying its power."

"We are holding up the light," the sisters said, "against the sin of racism that is still alive and well in the Catholic Church today."

They said this has been happening "since the first Catholics set foot on this continent, armed with papal bulls sanctioning and blessing the enslavement of Africans and the removal of native peoples from their lands, all in the name of Christianity."

This continued, they added, during the civil rights movement when Black Catholics continued to experience "racism, segregation, Jim Crow laws, disenfranchisement, police brutality, and socioeconomic inequality in society and in the Catholic Church," while church leadership, "for the most part, remained silent and disinvested."

And now, during this current moment of racial unrest, the sisters maintain that Catholics are not doing enough.

"Very few bishops have spoken out in support of the peaceful demonstrations by the Black Lives Matter movement; very few have called out the racism and hypocrisy of many white Catholic priests and laity. Sadly, the leadership of the church is not addressing the slaughter of Black lives in the streets of our cities by those sworn to serve and protect as a pro-life issue," they said.

The sisters also questioned why the U.S. Conference of Catholic Bishops hadn't "publicly issued a strong statement in support of the courageous actions of their brother bishops," referring to Washington Archbishop Wilton D. Gregory and Bishop Mark J. Seitz of El Paso, Texas, as well as other bishops and priests who have shown support for the Black Lives Matter movement.

In response to the sisters' statement, Bishop Shelton J. Fabre of Houma-Thibodaux, chairman of the conference's Ad Hoc Committee Against Racism, said: "We have great respect for the women religious who do so much for their communities, the laity and the church at large.

"We invite the sisters to be in conversation and deeper collaboration with their local bishops, many of which have spoken out boldly in confronting racism as an attack against the sanctity of life and contrary to who we are and are called to be as disciples of Jesus Christ."

In a statement to Catholic News Service, he added: "In response to the strife, anger, anxiety, and anguish felt by people due to ongoing racism in our church and society, dioceses and entire conferences of bishops have had listening sessions, webinars, calls for prayer and fasting and task forces formed to confront racism." 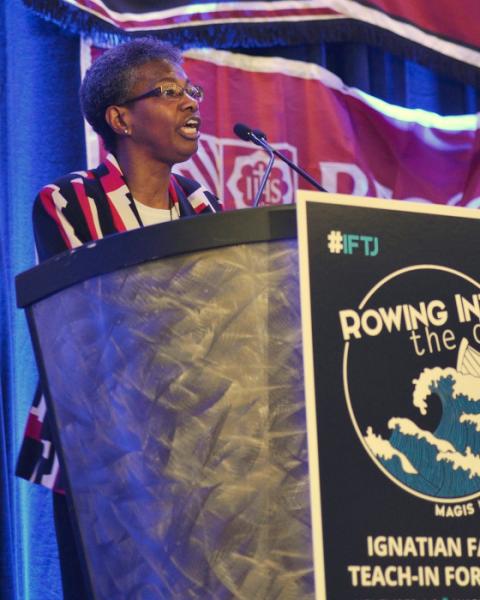 Sr. Patricia Chappell, a member of the Sisters of Notre Dame de Namur, speaks to young adults at the Ignatian Family Teach-in for Justice held in Arlington, Va., Nov. 5, 2017. Chappell, executive director of Pax Christi USA, is a founding member of the National Black Sisters' Conference, and served as its president from 1996 to 2001. (CNS/Courtesy Ignatian Solidarity Network)

The bishop, who led the bishops in writing their 2018 pastoral, "Open Wide Our Hearts: The Enduring Call to Love — A Pastoral Letter Against Racism," added that laity-led efforts responding to racism have been taking place across the country.

But he said that "until racism is eradicated from our church and society, it is impossible to say that any one of us has done enough," and he said he welcomed "the light the sisters hold up to shine upon us all."

Another focus of the sisters' statement was the need to view efforts against racism as a pro-life issue, quoting Pope Francis who said: "We cannot close our eyes to any form of racism or exclusion while pretending to defend the sacredness of every human life."

"If we as Catholics are truly to 'Open Wide Our Hearts,'" the sisters said, referring to the pastoral, then Catholics must "hold up the light of Christ against the sin of racism. We must speak the truth not only in love, but we must speak the truth forthrightly about the complicit, systemic and structural racism that continues to exist in the American Catholic Church today."

If Catholics don't commit to this, the sisters said, "it will make a fallacy of all that we profess as members of the one body of Christ."

Until racism is eradicated, the sisters said they would "continue to hold up the light" for the church they love and "to which we have dedicated our lives."

In May, the sisters issued a statement about recent deaths of Black Americans at the hands of police and said they would not remain silent about it.

They said that if the bishops' pastoral on racism is to "have any moral legitimacy, then our episcopal leaders must give more than lip service to addressing the sin of racism that is destroying communities of color around this nation. As Christians, as Catholics, as people of faith, we must do more than just pray; we must model Jesus' message to love one's neighbor."