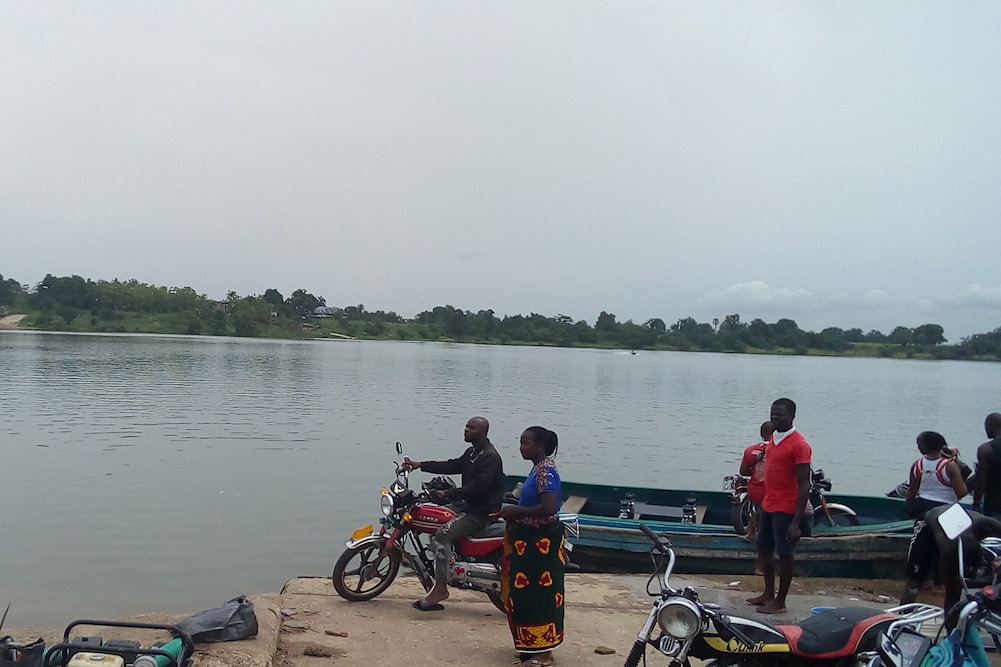 Editor's note: Fifty years ago, the Biafran War officially came to an end with the signing of the surrender documents by Gen. Philip Effiong, the administrator of Biafra, after Col. Chukwuemeka Odumegwu Ojukwu went into exile in 1970. However, there are still unresolved issues surrounding the war: growing agitation for separation, no cenotaph erected or wreaths laid at the tomb of those who fought and died in the war. NCR's freelance correspondent, Patrick Egwu spoke to some Catholics on the anniversary.

On July 6, 1967, war broke out between a Muslim Hausa dominated government of Nigeria and Biafra — an area mostly dominated by Christian Igbos living in the country's south geopolitical zones. Nigeria had won independence from British colonial rule Oct. 1, 1960.

A coup in 1966 by Johnson Aguiyi-Ironsi, an army general from the South East region, led to death of Prime Minister Abubakar Tafawa Balewa and other top leaders from northern Nigeria dominated by Hausa and Fulani ethnic groups.

The north felt betrayed in the coup as no Igbo leader was killed. Six months later, a counter-coup was launched by Gen. Yakubu Gowon and other young military officers from the north. Aguiyi-Ironsi was killed in the process, and what followed was a pogrom, a series of massacres and increased violent riots targeted at the Igbos living in northern Nigeria. Reports say more than 80,000 to 100,000 Igbos were killed, while more than one million fled back to the eastern region.

On May 30, 1967, Col. Chukwuemeka Odumegwu Ojukwu, a Catholic from the Igbo ethnic group, declared the eastern region as an independent Republic of Biafra following the massacre of his people. When several peace agreements and negotiations brokered between the two sides failed, Nigeria's federal government launched a military operation to reunite the breakaway republic. What followed was a 30-month civil war that claimed the lives of more than 2 million people, predominantly from the Biafran side.

"It was a dark moment in our history," Fr. Gerald Ohaeri, a Spiritan priest and member of the Holy Ghost Congregation, told NCR. "The war was a war of liberation for everybody in the East," he says referring to Igbos living in South East Nigeria. "Everybody felt we were being marginalized and we felt we should be on our own and that was what caused the whole thing."

Ohaeri was a 16-year-old seminarian in high school when the Biafran war started. As a Seminarian, Ohaeri was active during the war — not in the battle field but as a volunteer for Caritas — the arm of the Catholic Church that responds to emergencies, promotes development and advocates for a fair and just world.

"We visited camps with victims of the war to deliver relief materials to them," Ohaeri, whose brother fought as a soldier during the war, says. 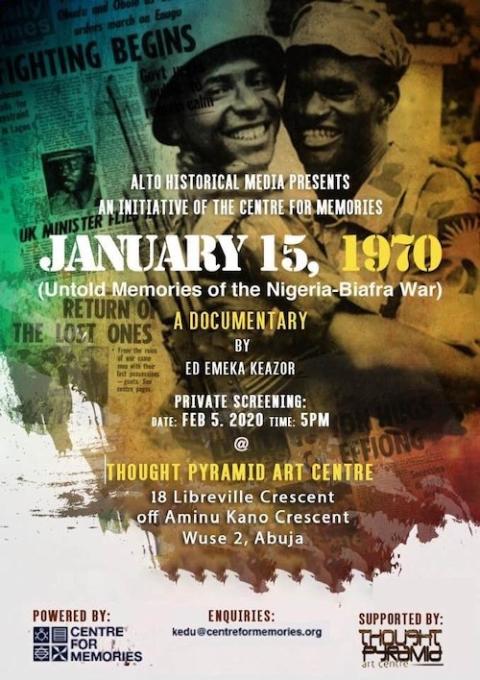 Memorials in commemoration of the end of the war

On Jan. 15, 1970, the Biafran War ended with millions of deaths, casualties and displaced persons recorded.

Each year, across Nigeria, events and remembrance ceremonies are held by people from the Eastern region who were mostly affected by the war. Public events, book readings and film exhibitions were held to reflect and remember those who died during the war and those still living with the scars of the war.

On Jan. 15, 2020, the Centre for Memories (CFM), a repository of Igbo history and culture, premiered a documentary titled "January 15, 1970: Untold Memories from the Nigeria-Biafra War" to coincide with the day the surrender document was signed by Effiong.

Another series of exhibitions will be held Feb. 7 and 8 in the city of Enugu — the once headquarters of the defunct Republic of Biafra. In 2017, CFM launched its inaugural civil war exhibition. The exhibition used photos and artifacts, to capture memories about the legacies of the war. The CFM has organized a monthly lecture series and book readings where events surrounding the war would be discussed.

Ohaeri said, "We are doing this memorial every year to conscientize ourselves on the problem that led to the war, and then we put things in place to make sure that those things are no longer with us."

"It is more than everything to me," Henry Ihuoma, who knew about the war from reading books, seeing documentaries and listening to his father who fought in the war, told NCR. "It reminds us of who we are and where we are coming from."

Henry Ihuoma, a parishioner at St. Jude's Catholic Church, Lagos, said the commemoration activities should be encouraged every year, as it is a platform for the younger generation to learn how to live today to avoid the mistakes of yesterday.

During the commemoration, Nigeria's Vice President Yemi Osibajo visited the National War Museum, which showcases relics from the war. The museum, established in 1985, was aimed at putting aside the ugly episode of the war behind and moving forward towards the process of national reconciliation and healing.

"Without mincing words, the civil war was a defining national tragedy and a robust national conversation is necessary to aid the process of healing and reconciliation," Osibajo said in a tweet after visiting the museum. "The last 50 years belonged to us, but the next 50 years belong to our children and we must unshackle them from ghosts of ancient grudges and grievances," he said. "By their conduct, our children show us that it is possible to forge friendships, let us give them a chance to do better than ourselves."

Despite the ugly episodes of the war, Nigeria hasn't learned its lessons and is still at the brink of another possible war as a result of growing agitations and protests by different regions to break away from the country.

For instance, a group known as the Indigenous Peoples of Biafra [IPOB] is agitating for a break-away from Nigeria and reestablishing the Republic of Biafra. Since 2015, the IPOB has organized peaceful demonstrations and sit-at-home protests, demanding independence. The group founded by Nnamdi Kanu, an Igbo, cites marginalization, insecurity and corruption — triggers of the Biafran war as reasons for their agitation. However, the group's movements and activities have been met with bloody opposition from Nigeria's security forces. In 2016, Amnesty International accused Nigerian army of killing 150 pro-Biafran peaceful protesters. In 2017, the federal government proscribed IPOB as a terrorist organization. 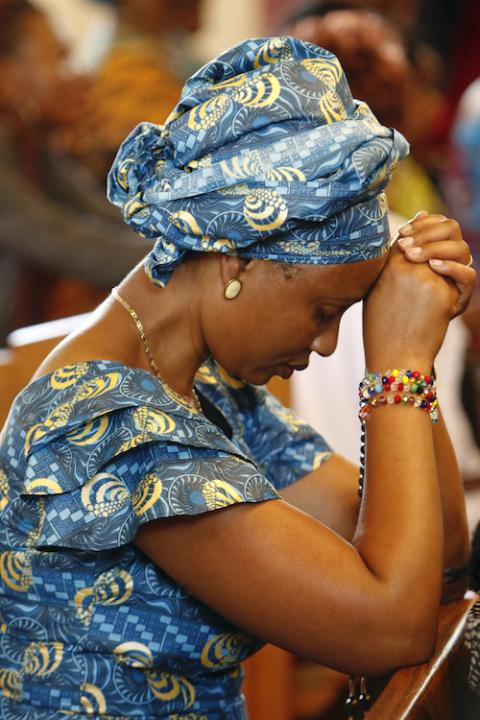 A woman prays prior to a Mass for Catholics of Nigerian descent July 21, 2019, at St. Thomas the Apostle Chapel in West Hempstead, New York. (CNS/Gregory A. Shemitz)

Ohaeri said the country is not serious in its reconciliation efforts. The priest told NCR that Nigeria's memorial of the war is not done the right way as he had seen in other countries that went through bloody wars, especially Germany, where he once lived.

"If we had a memorial at the end of the war, it would have taken care of all these agitations," Ohaeri said. "The memorial is to say, 'This war was fought and we made a mistake or we did not make a mistake?' What were the mistakes we made? We must correct them so that war will not come again. But if you don't correct those mistakes, they will keep reoccurring like you have all these agitations going on."

"The agitators say this country is not working, it's not a home. So the same problems that were there in the first place are still there," he said.

The Nigerian government has been accused of not publicly apologizing to the Igbos who were largely affected in the war.

"After 50 years of fighting the war, no government in the country has ever apologized for the genocide committed against the people," Ihuoma said. "I think that is the biggest problem, and it's quite unfortunate."

"People are not comfortable with Nigeria because the country is not working, and that is the problem. But if we address the issues realistically and sincerely, all these agitations will fizzle out," Ohaeri told NCR. "That is how to solve problems."