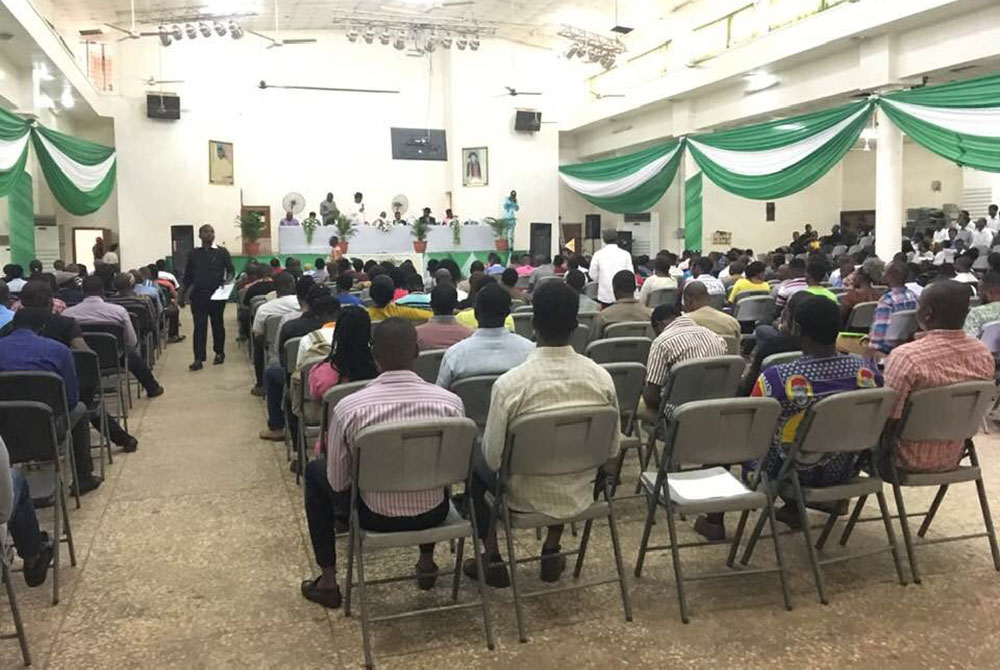 Participants at the witchcraft conference at the University of Nigeria, Nsukka, in November 2019 (Patrick Egwu)

Last November an international conference on witchcraft divided Nigerians across religious lines. The B.I.C Ijomah Centre for Policy Studies and Research at the University of Nigeria, Nsukka — Nigeria's first public institution — organized the conference, the first in the country that aimed to demystify the concept of witchcraft that has been shrouded in secrecies and mysteries for decades in Nigeria, the West African region and all around the world.

"All cultures do not share a consistent pattern of witchcraft practice and beliefs," Egodi Uchendu, director of the center, said. "In Nigeria, for instance, the practice of witchcraft often intercepts with other concepts like magic, sorcery, esotericism, diabolism and even religion. From an interdisciplinary point of view, this conference seeks to find answers to pertinent questions such as: What is witchcraft? What factors influence witchcraft labeling in various communities? How does the practice of witchcraft affect society?"

However, other Christian groups differed in opinion and support of the conference, which they said would add knowledge and create awareness on the mysteries of witchcraft.

During the conference, a Catholic priest, Fr. Innocent Enweh from the department of religious studies at the university, said the opening prayers and asked for God's intercession and blessings on the success of the event.

In reacting to the debates and controversies generated by the conference, Bishop Matthew Hassan Kukah of the Diocese of Sokoto, said witchcraft exists and made reference to Jesus' encounter with demonic spirits, as reported by Crux.

"Church pastors discuss witchcraft regularly and preach against it all the time, drawing from their experiences during their training and in their ministries," Uchendu, a professor of history and international studies at the university, said in response to the protests about the conference. "I am sure the information from this conference and the research findings would assist them in their work for the gospel."

Uchendu continued: "Some persons erroneously concluded that only witches can discuss witchcraft. We are not witches. We are professors and scholars who are intrigued by this phenomenon of witchcraft."

"I don't see anything wrong with this event," Enweh told NCR. "People are just being ignorant about an academic event that wants to promote knowledge and help people better understand the concept of witchcraft."

Despite the protests, more than 1,000 students, scholars and researchers attended the conference. Scholars and researchers from the fields of psychology, philosophy, humanities and anthropology attended, presented papers and shared thoughts on the concept of witchcraft and sorcery, and the mysteries behind them.

Uchendu said the conference was all about "provoking intellectual reflections that guide the shaping of thoughts and the development of a pro-positive developmental mindset in Nigeria and Africa." 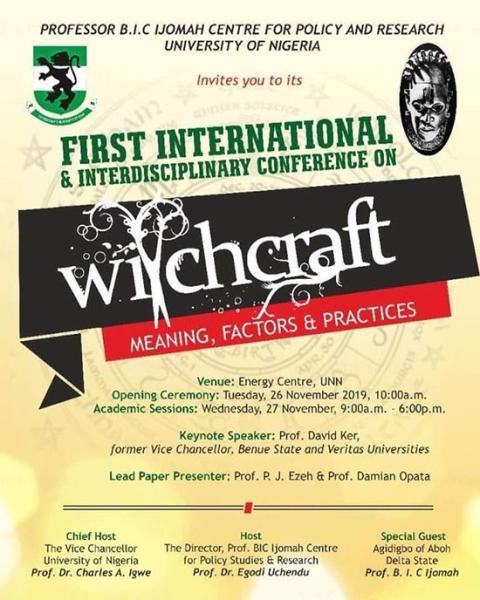 A poster for the conference (Courtesy of B.I.C Ijomah Centre for Policy Studies and Research)

With its diverse religious orientations and a reputation of being the most religious people in the world, there is a deep belief in witchcraft, black magic and other acts of sorceries in some parts of Nigeria, often taking traditional forms. People believe that some supernatural forces are invoked to attack other people.

Widespread poverty and diseases such as HIV/AIDS are some of the reasons for the increase in the belief systems in witchcraft. Families or individuals experiencing misfortune easily blame it on their children. Children who often fall sick, for example, are labeled as witches and wizards.

In 2018, Nigeria displaced India as the country with the largest number of people living in extreme poverty, with an estimated 87 million Nigerians living on less than $1.90 per day, according to findings by the World Data Lab's World Poverty Clock in partnership with the Brookings Institution.

Christian groups and NGOs have been advocating for an end of branding children as witches. In Nigeria children are branded as witches, attacked and often killed in some cases. A UNICEF report highlighted the violence and abuse children accused of witchcraft face in Nigeria. As Utibe Effiong reports at The Conversation, research shows that the practice of witchcraft is very common in the Niger Delta and among the Ibibio tribe, who live predominantly along Nigeria's coastal and southern areas.

In 2012, however, some progress was made: a state government introduced a law that makes it illegal to accuse children of witchcraft. But since the law was passed, no person has been prosecuted for violent attacks on children as witches.

The witchcraft conference was intended to dispel the culture of witchcraft and fear that is affecting Nigeria, Egondu said.

In 2009, as reported by The New York Times, during his first pilgrimage in Africa, Pope Benedict XVI told clergy and other Catholic faithful in Angola to work against beliefs in witchcraft, emphasizing that "Christ has triumphed over death and all those occult powers."

"I have heard that these things exist but it was during the conference that it became more clear and meaningful to me," Pascal Agu, a Catholic student at the university who attended the conference, told NCR. "They adopted an academic angle to make me understand what witchcraft is all about and the myths surrounding it in different societies and cultures."