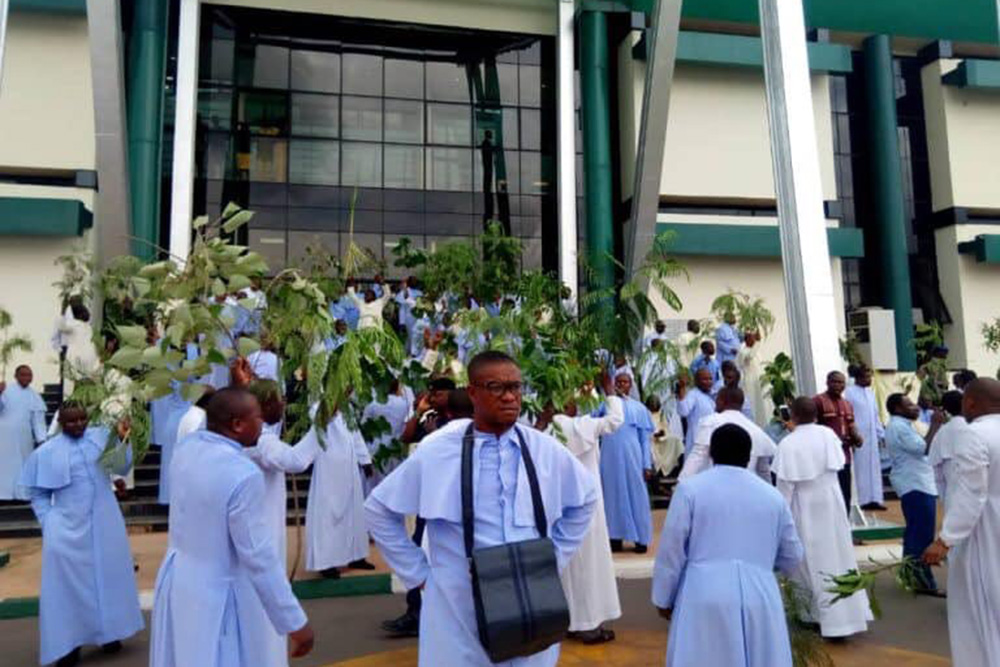 The killing of Fr. Paul Offu Aug. 1 led to a protest by Catholic priests in the diocese. Priests are seen here protesting at the Government House in Enugu, Nigeria. (Patrick Egwu)

On Aug. 4, about 1,000 Catholics attended a Mass offered by Bishop Callistus Onaga of the Diocese of Enugu at the Holy Ghost Cathedral following the killing of Fr. Paul Offu.

Offu was killed by gunmen, suspected to be semi-nomadic herdsmen from the Fulani ethnic group, on Aug. 1 when he was returning to his parish, St. James the Greater Parish in Enugu state, South East Nigeria.

The killing of Offu triggered a massive protest by priests in the diocese who marched through the streets in the city.

"Nobody is safe now; we are no longer safe," Onaga said during the Mass. "We should always pray for peace of our people and land because we are not the only ones affected. We seem to be living in a state of anarchy, total breakdown of law and order. In recent times, an alarming number of our people, including priests and government officials, have been killed by these murderers. The rate of kidnappings have continued to increase, both in the villages and in cities." 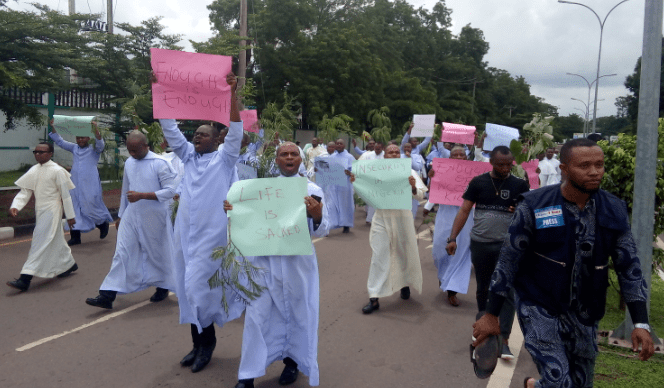 Offu was not the only priest to be murdered in a gruesome manner or attacked in recent times in Nigeria. On Aug. 29, Fr. David Tanko was killed by gunmen while on his way to a peace meeting with fellow priests on how to resolve a communal crisis in Taraba state, in Nigeria's northeast region. After he was killed, his dead body and car was set ablaze. In March, Fr. Clement Ugwu was shot and abducted at his parish in one of the local farming communities in South East Nigeria. A few days after he was abducted, Ugwu's decomposing corpse was found a few miles away from the church. The three gunmen who allegedly carried out the attacks were later arrested.

In 2018, two priests, Fr. Joseph Gor and Fr. Felix Tyolaha, and 17 of their parishioners were killed by suspected herdsmen who had invaded their parish in the Middle-Belt region of the country during a 5:30 a.m. Mass. The attackers also burnt more than 50 houses and destroyed farmlands. After the attacks, thousands of parishioners took to the street to protest the killings and demand justice. Pope Francis, during a Mass in Rome, prayed for the two priests.

Across Nigeria, suspected herdsmen have been blamed for abductions for ransom and killings. Foreign Affairs reported that "according to the International Crisis Group, in 2018 the conflict between herders and farmers was six times deadlier than Boko Haram, with a death toll of 1,949, almost double what it was the year before."

In a statement in August, the Catholic Bishops Conference of Nigeria called on President Muhammadu Buhari to deal with the herdsmen killings, kidnappings and other crimes. Last year, following reported killings, the bishops' conference had asked Buhari to step down in the wake of the killings for his inability to protect Nigerians.

"We came here to pay our last respect to the priest who was killed in this unfortunate manner," Nkem Anele, one of the worshippers who attended the Mass at the cathedral, said. "We are scared because nobody knows the next victim. If nothing is done soon, then these killings will surely go on and become uncontrollable."

The Africa Faith and Justice Network, AFJN, a Washington-based social justice organization, called for urgent action from the government to end the killings.

The AFJN has been working in Nigeria with Catholic communities to promote peace, advocate for human rights and social justice.  Last year the AFJN held a national day of public prayer which they called "public witnessing against killings in Nigeria."

"We held a conference and challenged them to stand up against the killing of priests in Nigeria," Notre Dame Sr. Eucharia Madueke, the coordinator for women empowerment at AFJN, said. "We need to continue to respond to the call of the church and act for the sake of justice and to claim our moral voice and speak out."

Nigerian churches have a tradition of praying for peace in Nigeria. Every Sunday, during post-communion rites, many parishes say a "Prayer for Nigeria in Distress," for peace and security in the country.

Meanwhile, solutions to the frequent unresolved killings in Nigeria are nowhere in sight. In the first quarter of 2019, 1,071 people were killed and 685 others were kidnapped across the country, according to the Nigerian police.

During the Mass at Holy Ghost Cathedral, Onaga said the government and security agencies owe the people the duty to protect them. 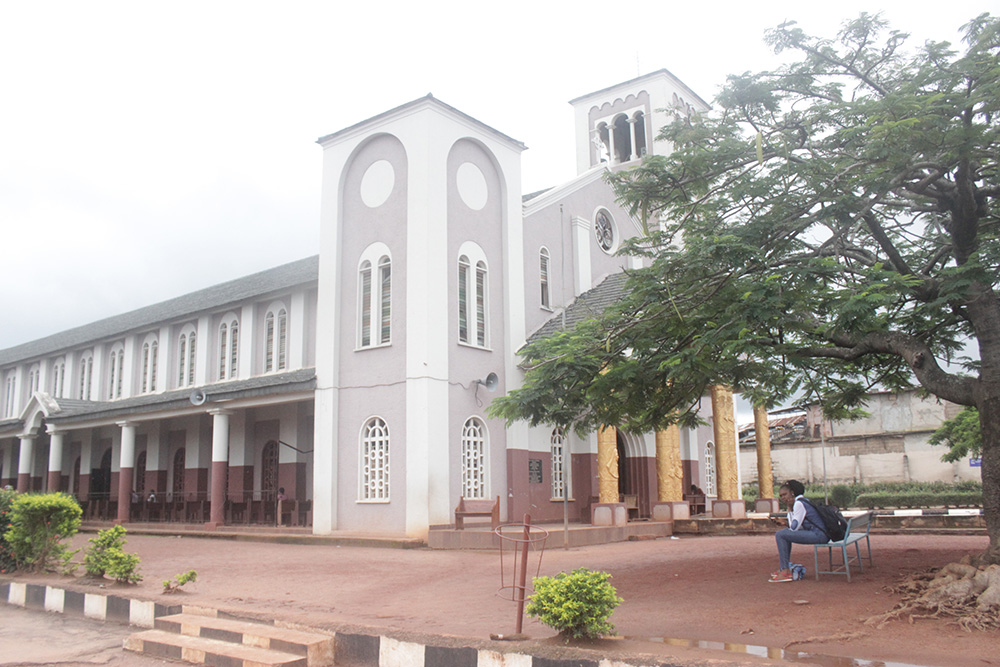 "In this era of technology, the deployment of surveillance devices has become very necessary in our effort to combat these security threats," Onaga said. "The government should formulate policies and enact laws that would checkmate these atrocities that are being meted out on our people, while it should provide counseling and other services to victims of herdsmen attack."

The government of the state where Offu was killed has started taking security measures to end the killings. After the killing was announced and the subsequent protests by the priests, a security meeting was called to review the security situations in the state and adopt best strategies. Security personnel in the state announced that aerial surveillance of the area where Offu was killed would begin.

An anti-kidnapping bill was also sent to lawmakers for review and passage. Similarly, the government announced the establishment of a Forest Guard initiative to patrol the forests in the state and check security threats. The initiative will employ 1,700 guards for takeoff who would form collaborations with the other 5,240 local security personnel already working in the state.

Madueke said there is a motive for the killings and that this will only be addressed when the suspects are arrested and prosecuted.

"Whoever killed the priest has a motive and we don't know why and until we know the motive, the government and the church can't find solutions to the killings because you might be fighting a lost battle. We have insecurity in the country and that is as a result that we do not know the truth," she said.

Fr. Uchenna Ajibo, a communications scholar at the University of Nigeria who was a friend of Offu, said the government is not serious about providing security.

"The killing might be a coincidence and not related to the herdsmen," Ajibo said. "They [government] claim the security situation is all right but that is not true. The government is playing soft with our security and the politicians too, are not acting because they don't want to lose their positions."

Two weeks after Offu's killing, the police said they arrested the suspected killers and they would soon be prosecuted. On Aug. 20, Offu was buried at the priests' cemetery at Holy Ghost Cathedral – the same place Ugwu was buried five months ago.