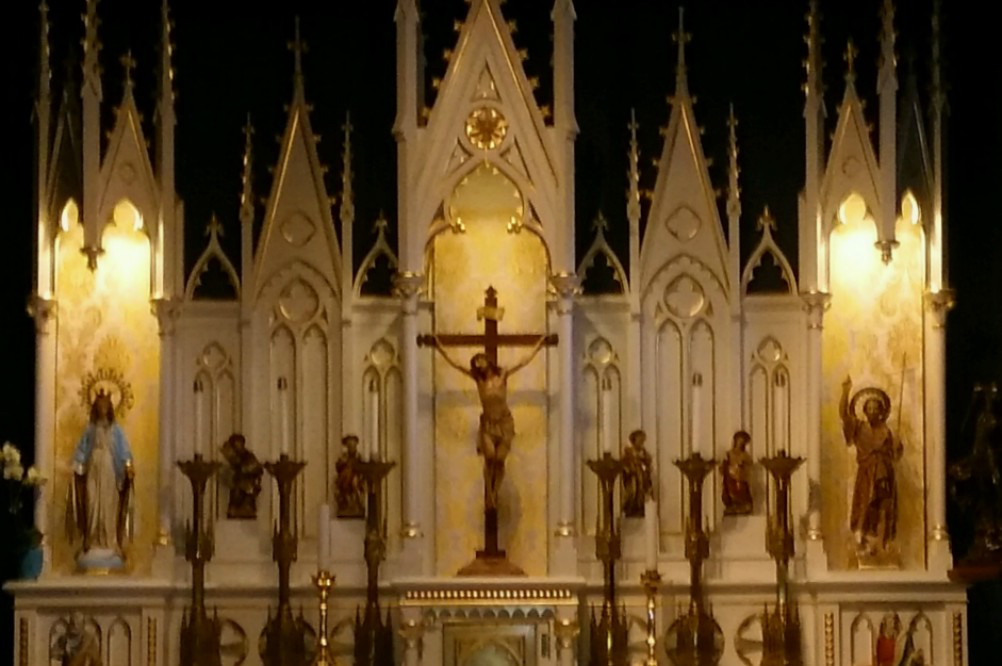 At the door of the studios of Church Militant in this Detroit suburb, visitors face a picture of Michael the Archangel putting the sword to demonic hordes.

Previously a dispenser of catechetical videos, Church Militant has been transformed into a prime player in the Catholic culture wars by president and founder Michael Voris.

Voris, 57, rejects what he calls "the church of nice," a Catholic belief in deference to church hierarchy and a willingness to incorporate those who sometimes fall short of its teachings, particularly regarding sexual morality.

Claiming three million supporters, Church Militant, with a full-time staff of 34, sends out via the internet for $10 a month per premium subscriber a daily newscast, panel discussion, and various other commentaries, seeking a vision of the church in line with what Voris describes as Catholic "orthodoxy." A visitor who uses the labels conservative or traditional is quickly corrected.

Two papal flags fly over Church Militant offices located in a light industrial, non-descript set of two buildings. But the flags could be out of place. In some ways, Church Militant considers itself more Catholic than the pope, at least the current Bishop of Rome.

A stairway in the studio building holds a collection of photographs of the popes, dating through the last two centuries. Absent is Pope Francis, although his image adorns other office spaces.

The sex abuse scandal, which Church Militant in its daily newscasts and discussions says is largely a crisis of homosexual priests permitted to harass teenagers and young men, is proof that Francis is not up to his responsibilities.

"He should resign," Voris tells NCR from his office, strewn with books on history and theology, the floor dominated by a kennel cage for his dog named Rebel.

Voris is careful when discussing his reasons why Francis should resign, lest he stomp on orthodox Catholic views of the papacy.

"In the arena of prudential exercise of his judicial authority, he is helping to erode faith in the church as a divine institution," he said about Francis.

Such unorthodox orthodoxies are the bread-and-butter of the Church Militant commentaries. But it also has experienced blowback. The Detroit Archdiocese, where Church Militant is located, asked the group to drop the Catholic label from its original name, Real Catholic TV, and has kept its ecclesial distance. An attack by Voris on the religious legitimacy of modern Judaism caused the Diocese of Scranton, Pennsylvania, to cancel a Voris speaking engagement there.

Beyond the intra-church skirmishing, much of the Church Militant operation acts like any other news operation. Its staff, especially on the technical end, are largely in their 20s and 30s, monitoring news on the web and pulling together programs. Voris is a former local television news reporter and video producer for General Motors, and at one time attended seminary in Yonkers, New York.

Throughout the Church Militant offices the chatter of Fox News mingles with the sounds of the rosary, prayed by the staff daily. A small chapel is filled with religious icons and statues. A control room is bedecked with the flags of countries that Voris has visited for Church Militant, including the United Kingdom, New Zealand, Belgium, France, Nigeria, the Philippines, Poland and Italy.

A mid-day luncheon discussion is more than the usual workday banter. Included are discussions with a visitor about President Donald Trump's immigration policies (strongly in favor); John Paul II, looked upon in a much better light than his latest successor Francis, and disgraced Cardinal Theodore McCarrick (viewed as a prime example of a homosexual-fueled crisis in the church).

Voris describes Trump as a Constantine figure, a pagan ruler who allows the church deference and freedom. Trump's appointments to the Supreme Court are seen by Church Militant as key to one day overturning Roe v. Wade, a prime political objective.

The daily newscast, presented by Christine Niles, offers a lead piece about German Cardinal Gerhard Müller, attacked by what she calls "pro-gay bishops." Also included: A Hong Kong cardinal opposes a Vatican accord with China; a jailed Pakistani Christian woman hopes to find asylum; Mass attendance drops in the Diocese of Saginaw, Michigan, after a sex abuse scandal.

A description of the Tijuana, Mexico, immigrant caravan echoes much of what is routinely heard via Fox News. The migrants are largely young men seeking work in the United States. There is evidence, says Niles, that disturbing news photos of mothers and children being tear gassed by U.S. border protection agents are setups, intended to garner sympathy for the migrants.

Then comes the daily panel discussion. Voris sets the tone. As is the case of many church news sources, the abuse crisis is at the top of the list. He blames the crisis on "widespread homosexual predation in the clergy, and not just of minors."

The panel talks about sex abuse in seminaries, leading with a petition organized by a Delaware mother demanding that bishops crack down on homosexual activity in priest formation.

"It's pederasty, pederasty, pederasty," says Voris, joined in agreement by his fellow staff, Niles, Simon Rafe and Brad Eli. Much of the discussion focuses on bishops. They go in and out of favor with the panelists. Once castigated, Cardinal Sean Patrick O'Malley of Boston is now praised for his intervention at the November U.S. bishops' conference meeting calling for an end to sexual harassment of adult seminarians. Cardinal Blase Cupich of Chicago is attacked for what the panel describes as indifference to the issue. 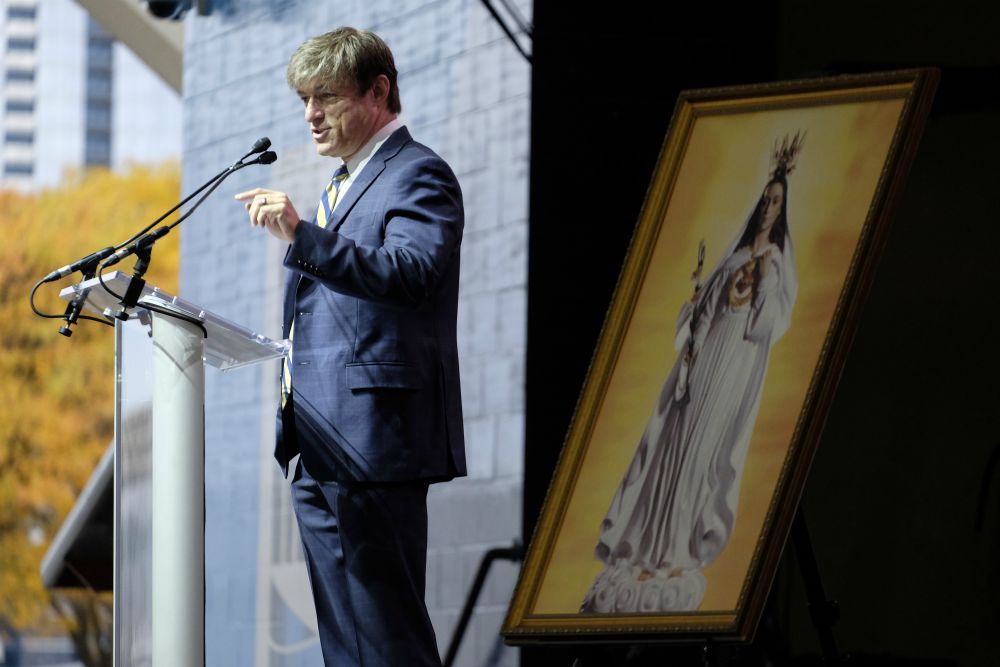 There's a feel of a kind of sports discussion show, where retired football players describe the intricacies of the zone defense. The names of bishops are bandied about, both praised and criticized, most of whom are unknown outside of their home dioceses.

Off air, the discussion wanders into Notre Dame football (both Voris and Niles are Notre Dame grads). Voris also makes a point of describing a gay subculture that he says existed in the 1980s at the New York Archdiocese's seminary in Yonkers. It made him uncomfortable.

Later, during an interview with NCR, Voris describes the work of St. Michael's Media, the parent company of Church Militant. The enterprise is split in two, he says, half a profit center selling religious items, and the other, which seeks donations to support the organization's media work.

Operating expenses are about $2.8 million per year, he says, with most of the revenue going to pay staff, including those on the Michigan headquarters site as well as outside consultants who contribute to the group's website and publications.

"We put the non in non-profit," he says. "At the end of the year we don't have much left over."

Much of the focus of Church Militant's newscasts and commentaries consists of attacks on those who argue for more inclusion of gays in the church. A favorite target is Jesuit Fr. James Martin. 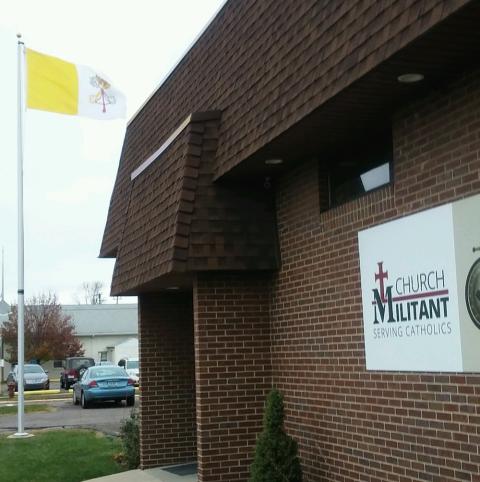 Still, Voris himself acknowledged that he once was involved in homosexual activities, although he now says he is a chaste heterosexual. He rejects the label of gay, arguing it is a construct used to defend sinful behavior.

"I believe there is only one sexuality," he says. "I've chosen to be chaste. This work demands a chastity because of its intensity." He has confessed to his sexual sins.

"I'm done with all that," he says, adding, "What matters is that you don't sin and you advance in holiness."

For Voris, the work of Church Militant is a regular struggle against what he disparages as the church of nice. The group's website describes him as having been raised in a post-Vatican II church "coming apart at the seams and hemorrhaging believers by the millions."

Church Militant remains a counterweight to the widespread consensus that has emerged in much of the Christian world, that the Jesus of the Gospels is one who embraces sinners and is kind about human weakness. It is a perspective often offered by Francis.

Not true, says Voris. There is a narrow gate to salvation, and most will not make it. The great Catholic mystics and the fathers of the church argue that most people are condemned, Voris says.

And, in his interpretation of the Gospels, the words of Jesus “are hard to square with the notion that most are not damned.”