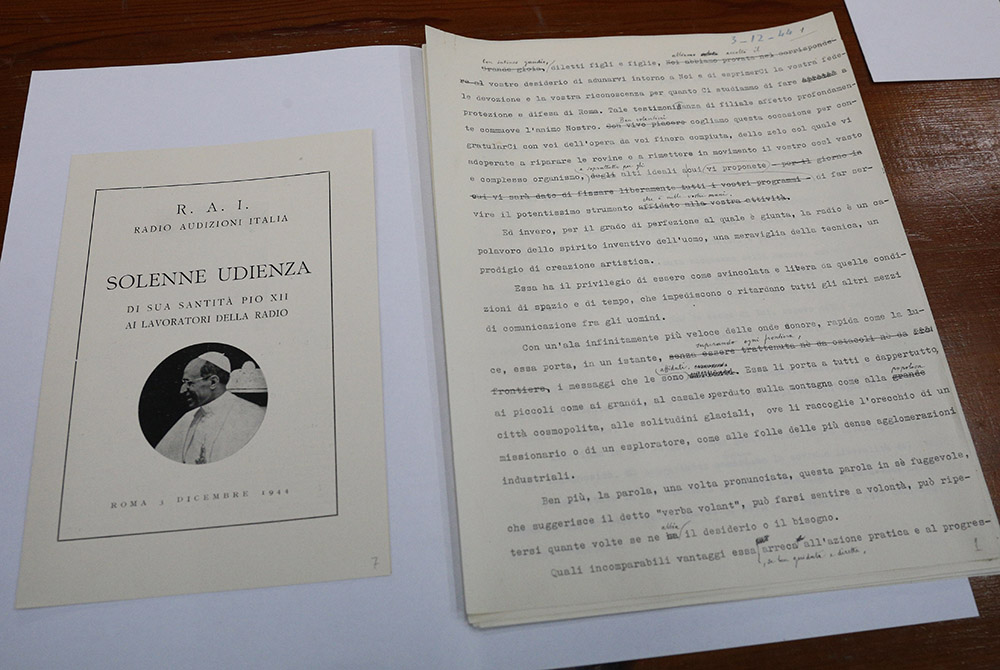 Handwritten corrections by Pope Pius XII are pictured on his text for a Dec. 3, 1944, audience with employees of Italian broadcaster RAI. The text was among materials from his pontificate on display for journalists in the Vatican Apostolic Archives at the Vatican Feb. 27, 2020. (CNS/Paul Haring)

Pope Francis' opening last year of the Vatican's archive of material related to his controversial predecessor Pius XII has provided a sense of hope that the Catholic Church can have open discussions about its past, three researchers who have had access to the archives told a May 5 webinar.

But the researchers, speaking in a discussion hosted by Fordham University, also said it would likely take years to assess the material the Vatican has made available about Pius, who led the global church from 1939-58 and has been under scrutiny in the decades since over his actions during the Holocaust.

As Brown University historian David Kertzer, author of several best-selling books on Vatican and Italian history and one of the researchers, put it: "I do not think there is going to be one smoking gun — in fact, I would despair of any evidence that's actually changing people’s minds these days."

Speaking alongside Kertzer on the panel were Maria Chiara Rioli, a fellow at the universities of Ca’ Foscari in Venice and at Fordham, and Nina Valbousquet, a researcher at the Ecole Française de Rome.

Valbousquet said she felt a sense of hope about Francis' decision to open the archives, which have now been available to researchers since March 2020, but remains cautious of "apologetic tendencies" to overlook questions about Pius' actions during the holocaust in favor of his canonization cause.

Pius was declared venerable by Pope Benedict XVI in 2009, placing the late pontiff effectively two steps away from possible sainthood.

Referring to Francis' promise on opening the archives that the church is "not afraid of history," Valbousquet called that a "good first step" but said that "unfortunately within the church there are other tendencies that are much more reactionary."

Although Kertzer expressed skepticism about finding shocking new evidence about Pius' actions during World War II, he said he expects the archives will provide "a much richer understanding of what [was] going on, even without a smoking gun."

According to the experts, much of what is in the seemingly endless secretive archival records are actually kind of boring — housing documents like requests for money to buy shoes. But scholars predict the vaults will shed light upon the range of opinion within church leadership at the time about how to respond to the reports about treatment of Jews in Nazi Europe.

Rioli described the opinions of bishops on the continent as “a mosaic” that will “give us a more wide view of mid-century church leadership."

Valbousquet said she had recently uncovered Vatican correspondence from shortly after the war that suggested officials had a deep lack of understanding of what had happened during the Holocaust and harbored antisemitic sentiments.

Valbousquet found a 1946 letter from a Vatican official about Jewish refugees performing a hunger strike to be allowed to immigrate to what was then Palestine. In the letter, the official commented that: "I don't believe that the hunger strike will last very long because Jews do not like to suffer and they are not used to suffering."

Kertzer stressed the importance of understanding the length of Pius' tenure, which went well past the war into the era of post-war reconstruction, the founding of Israel, and the theological debates that would eventually lead to the 1962-65 Second Vatican Council.

Understanding the postwar era of his papacy is crucial to understanding what Pius signifies today, said the researcher.

[Julia Morris is a recent graduate of John Carroll University, now serving as the justice outreach coordinator with the U.S. Federation of the Sisters of Saint Joseph.]