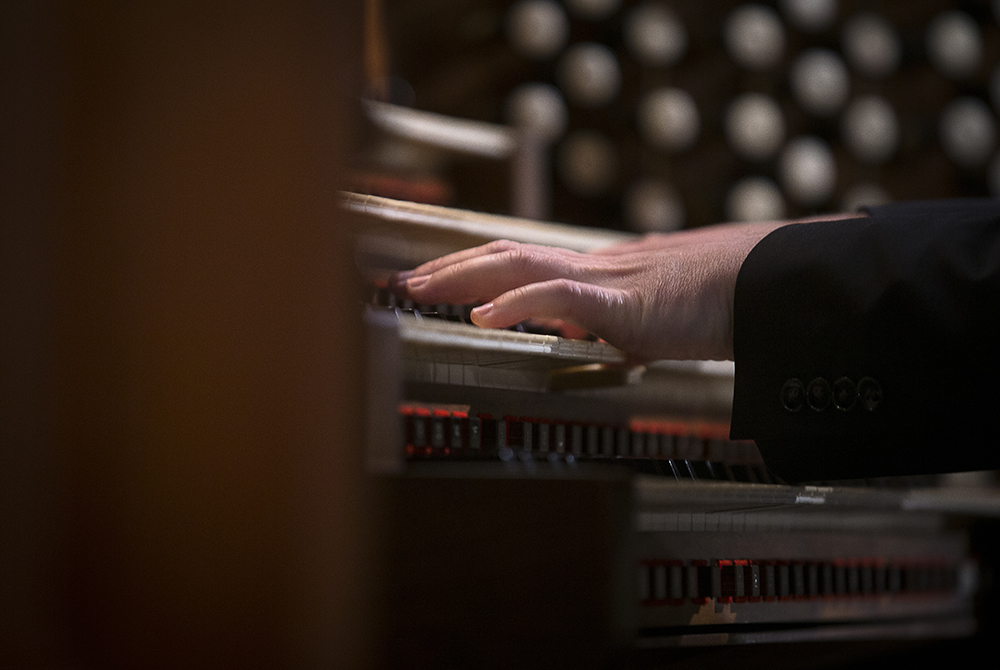 An organist rehearses at the Basilica of the National Shrine of the Immaculate Conception April 25, 2019, in Washington. (CNS/Tyler Orsburn)

Maria Solis is at home with the sprawling, diversity of Catholic liturgical music in the United States. Growing up bilingual in Texas, she saw the eclectic cultural influences of music at Mass, and, as someone who's been doing liturgical music for most of her life, recent guidelines on hymn lyrics from the doctrine committee of the U.S. Conference of Catholic Bishops — first reported in early December — didn't faze her.

"I don't really have a problem with any of them. They're trying to filter out things that probably should have been filtered out a long time ago," Solis, a wife and mother in her early 30s who oversees liturgical music at a small parish in Omaha, told NCR.

The context of the document, however, is a different story. "Catholic Hymnody at the Service of the Church: An Aid for Evaluating Hymn Lyrics," first came to light in early December, amidst a surge in the pandemic and a spate of federal executions. The executions drew a statement from the bishops' conference on Dec. 7, but Solis says the gap in priorities is clear.

"I have a big problem that they didn't go that hard on the federal executions. Because which one is the greater evil?" she said. "I've stopped expecting them to loudly condemn violence against any oppressed group besides the unborn."

The other pushback to the document was the perception that the bishops were trying to establish a blacklist of songs. The document lists six areas where the bishops see hymn lyrics falling short and provided examples from actual hymns currently in use. The inclusion of "All Are Welcome" and "Canticle of the Sun" on this list created an almost instant Pope Francis vs. the bishops optic. Concerns included referring to the Eucharist as merely as bread and wine (wine being especially problematic because the Scriptures and prayers at Mass mostly refer to a cup or chalice), imprecise language in reference to the Trinity and misstatements about the relationship between God and humanity and the role of the Jewish people. The document made no judgment on the title of "All Are Welcome."

"There's a lot of drama when stuff like this gets out," David Anderson, editor-at-large at GIA Publications in Chicago, told NCR. "It's important to realize that they're trying to give the bishops some advice."

Anderson understands the complexities of the ecosystem of liturgical music. This includes composers and hymn text writers who create new hymns, the publishers who include them in hymnals, the bishops (especially those with publishers in their dioceses) who grant approval for their usage, and the musicians and cantors who play these compositions and lead their people in song, all in dialogue with each other at every level. In addition to his role at GIA, Anderson is director of music and an organist at Ascension Parish in Oak Park, Illinois.

"As a publisher, I'm not in charge of all this. I have to work in collaboration with the bishops," he said. "It's not always top-down. There is a lot of collaboration that goes on. There's a lot of respect."

A composer who knows what it is to have his work name-checked for the world to see is Fr. Michael Joncas, whose composition "On Eagle's Wings" received a prominent reference in President-elect Joe Biden's Nov. 7 victory speech. Joncas calls the new document "at best advisory" with a much narrower focus than a bishops' conference document like 2007's "Sing to the Lord: Music in Divine Worship," which was approved by a vote of all the bishops.

"I see it as a positive thing, even though they critique particular hymn texts and, frankly, hymn texts written by my friends," he said, affirming that what is sung at Mass is incredibly important "because it shapes and forms us."

Msgr. Rick Hilgartner, a priest of Baltimore who previously served in the divine worship office of the bishops' conference and later as president of the National Association of Pastoral Musicians, or NPM, does not see the document as leading to a blacklist of hymns. He said it should be viewed as the start of a dialogue. NPM — of which he is still a board member — welcomes this dialogue, he said, because they welcome what he calls the implication of the document: "We recognize the power of what happens in the liturgy. Music in the liturgy isn't just window dressing."

Many challenges face composers and hymn text writers seeking to fulfill the standards of conformity with Catholic doctrine and appropriate words and imagery, which the new document asserts. For one, there's the outright disparity in genre: Song lyrics are poetry.

"The poetry of a hymn text and the academic prose of the catechism just can't be considered similarly," said composer Orin Johnson, who serves as director of music ministries at Sts. Joachim and Ann Parish, near St. Louis. "We ought not have heretical hymn texts, of course, but neither can we expect them to always be literal and complete, unless the suggestion is we move toward singing only Scripture or the catechism verbatim."

"You really can't expect a hymn or a song to encompass an entire teaching all the time," noted Anderson at GIA. He cited the Eucharist as one huge example. A parish that focused too much on lyrics of bread and wine could inadvertently teach people the wrong thing. He suggested "Take and Eat" — with the line "This is my body" — as a countermeasure. 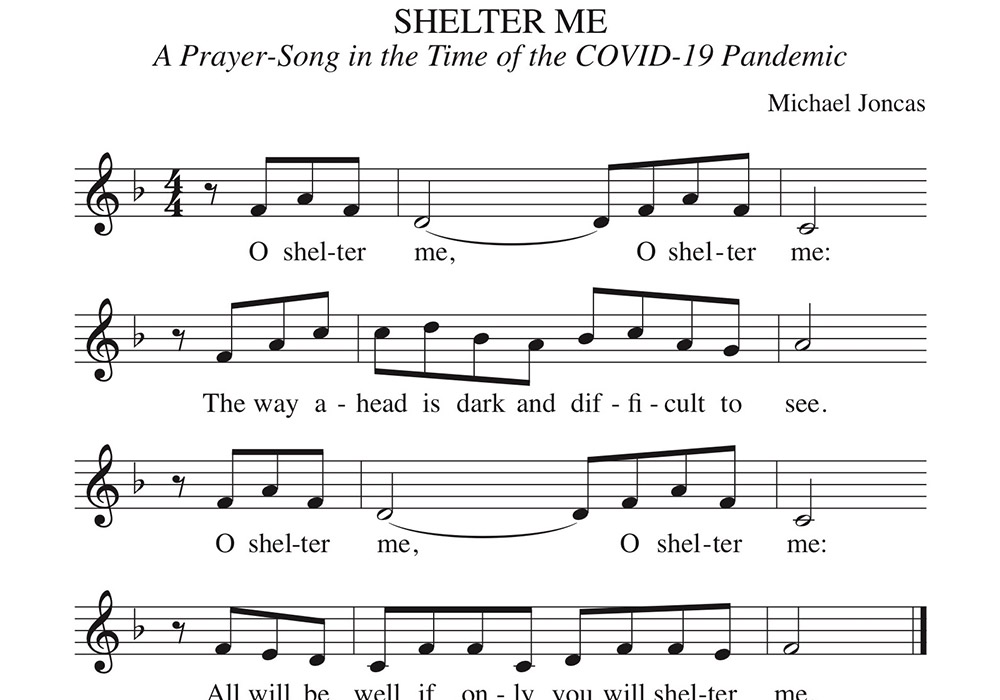 A piece of sheet music is pictured, for a hymn composed by Fr. Michael Joncas for the coronavirus pandemic. Joncas, a priest of the Archdiocese of St. Paul and Minneapolis, said his composition, "Shelter Me," is a paraphrase of the well-known Psalm 23. (CNS/Courtesy of Fr. Michael Joncas)

The standards for what meets Catholic doctrine, however, can be subjective when it comes to assessing lyrics. Linda Reid, director of music and liturgy at St. Thomas Church in Providence, Rhode Island, notes that this framework puts the onus on newer hymns while glossing over the license taken by writers centuries ago.

"If one is going to accept poetic texts in older metrical hymns, then one must be prepared to accept them in contemporary texts as well," she told NCR.

Hilgartner concurred, citing examples even from the songs singled out by the new document that reflect the messiness of tradition. For instance, the reference to wine in "Bread That is Broken" receives criticism, despite being taken from the writings of St. Ignatius of Antioch. "The Communion antiphon from his feast day cites that text!" Hilgartner said. Similarly, with, "Canticle of the Sun," he said, "They're questioning the verse about dear Sister Death," which "is part of the 'Canticle of the Creatures' " by St. Francis of Assisi.

"They did have to think carefully about using examples," James LeGrys, theological adviser for the Secretariat of Doctrine and Canonical Affairs of the bishops' conference, told NCR, noting that the document would have been ineffective in conveying the committee's concerns without specific examples. While the document didn't focus on certain composers or publishers, he acknowledged, "It does kind of put people on notice."

He added, however, that the document was intended for a quiet rollout among bishops for sharing with publishers, composers and liturgy offices. But the calling out of certain texts took everyone by surprise when media got a hold of the story. For those who question the timing and prioritization of the document, LeGrys said the project of addressing hymns languished on the backburner for eight years.

But focusing on that process misses the point, he said.

"This should be looked at as something that's actually looking to the future, as providing a way forward. It's hoping to push things in a different direction," LeGrys said. "A lot of these problems, I don't think it would take an awful lot to fix them."

Alan Hommerding, a composer who has worked in publishing for decades, agreed it's a natural part of the process in reviewing hymn lyrics to say, "This is not correct, but this would be another way to say it that would fall within Catholic doctrine."

"We need to realize that we are starting to have the conversations that we should have been having 30 or 40 years ago," he added.

"This is just going to be an opportunity for the church to foster new music in the vein it wants it, especially written by women and people of color," said Ali Darley, director of music ministry for St. John Church and Student Center, which serves Michigan State University in Lansing. "Guess what — there's a lot of music out there that we're not exposed to."

A version of this story appeared in the Jan 22-Feb 4, 2021 print issue under the headline: Not all lyrics welcome in hymn guidelines.