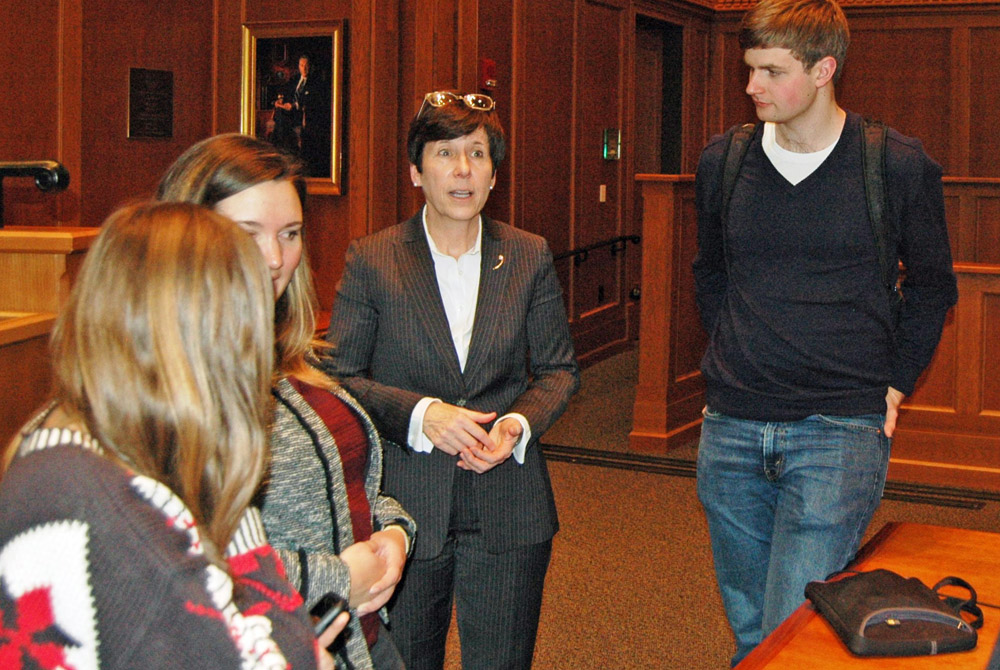 Scarcely a month after U.S. Attorney General William Barr gave a controversial address on religious freedom at the University of Notre Dame Law School, an adjunct professor at the school and Democratic congressional candidate argued that Barr's remarks were "theologically ill-informed" and also "dangerous to the rule of law within our constitutional republic."

Patricia Hackett made her case in McCartan Courtroom, the same cavernous law school auditorium that an invitation-only audience had filled for Barr's Oct. 11 address, which instantly and nationally sparked intense reactions, both positive and negative.

"I was dismayed when I read his remarks," Hackett told NCR in her South Bend law office a few days after her Nov. 12 address. A practicing attorney and a graduate of Notre Dame Law School, she is also now, for the second time, seeking the Democratic nomination to run for Congress in Indiana's 2nd District against a three-term Republican incumbent, Rep. Jackie Walorski.

But it was deeply held values drawn from her education in Catholic theology and the law — not political motivations — that drew her to respond, she said.

"Mr. Barr's analysis of religious freedom, in my judgment, is inconsistent with his duties as the sitting Attorney General of the United States," Hackett explained. "And what he said about the Judeo-Christian tradition was theologically and historically inaccurate. I would go so far to say that I have never read or heard remarks from a government official in the United States that were so inaccurate and disturbing."

Related: Notre Dame had a right to host Barr — but his talk was ridiculously stupid

Hackett, who also holds a master's degree in theology from Notre Dame, also did graduate theology work at the Catholic University of America. The daughter of two attorneys and raised in suburban Detroit, she confessed that after she read Barr's talk, she felt a persistent nudge, a personal responsibility to "correct the record." She titled her talk, "Contempt of Grace: The Theological and Legal Error of William Barr's Understanding of Religious Freedom."

"I believe in Catholic higher education and we are preparing practitioners of the law here," she said. "I felt that Attorney General Barr was so incorrect in his presentation regarding the obligations of the law."

In her own talk, Hackett began by reminding her audience that the duty of any attorney general of the United States is "to defend the religious liberty of all people, Christians and non-Christians, believers and non-believers alike." But Barr, she said, appeared to justify "empowering certain religious institutions over the religious freedom and conscience of all Americans, whether religious or non-religious."

As he began his Oct. 11 address at Notre Dame, Barr stated that religious liberty was an important priority for the Trump administration and for the current Department of Justice, the department he has led since February.

"We have set up," Barr said, "a task force within the [Justice] Department in which all the various components that have equities in this area — the Solicitor General's Office, the Civil Division, the Office of Legal Counsel and other offices — are all represented. We have regular meetings. We keep an eye out for cases or events around the country where states are misapplying the establishment clause in a way that discriminates against people of faith."

After describing the role of the task force, Barr then focused on the development of the Constitution, explaining that it was rooted in the classical Christian tradition. The Founders, he said, "believed that the Judeo-Christian moral system corresponds to the true nature of man." Furthermore, he added, "Judeo-Christian moral standards are the ultimate utilitarian rules for human conduct. … They are like God's instruction manual for the best running of man and the best operation of human society."

Though there were strands of truth in Barr's portrayal of the nation's roots as Christian, Hackett said in her address, the first three presidents were not orthodox Christians, but Deists. Washington, Adams and Jefferson and the other Founding Fathers wanted their young nation to protect the basic rights of all, including the right to worship — or not worship — as they wished. The guiding principle of the newborn government was individual freedom for all. Their goal was to avoid the establishment of a theocracy where the rights of individuals could be curbed or denied.

Hackett said that the task force Barr created to protect religious freedom is too selectively and narrowly focused. "This … force of the law is being implemented to protect and further his brand of Judeo-Christian institutions, not people of all faiths — Muslims and other religious minorities or atheists, which the establishment clause also protect."

The attorney general, Hackett charged, might have his own reasons for "rewriting" American history and locating its roots in the Judeo-Christian construct, rather than in the Enlightenment where most historians say it belongs. The Enlightenment promoted a humanism that included liberty, a clear separation of church and state, and fraternity. 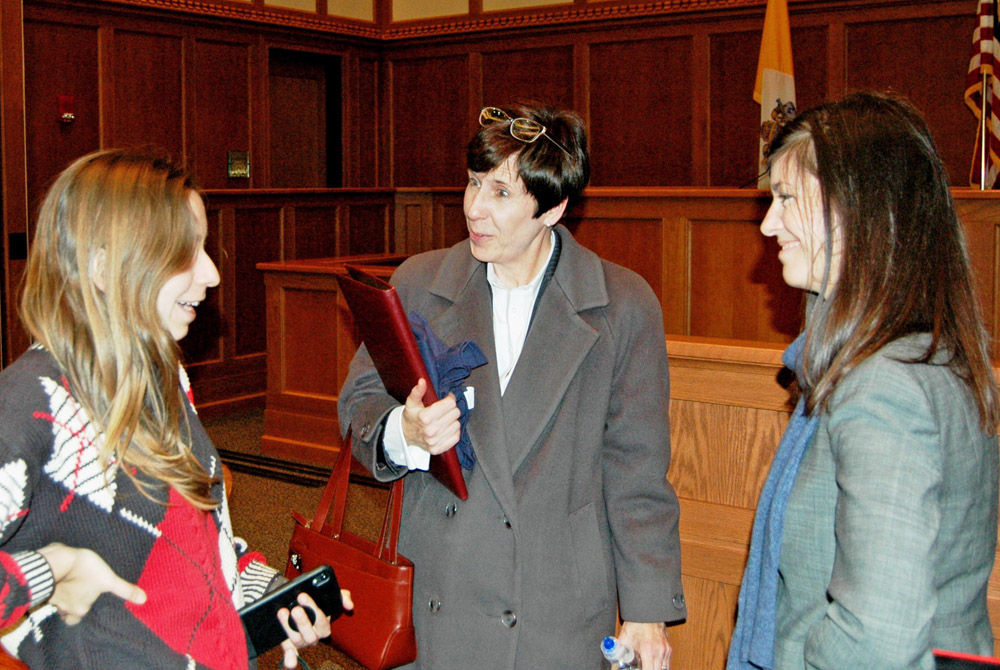 "The Enlightenment and our constitutional republic, which is rooted in enlightenment political theory, entail a fundamental commitment to the dignity of all persons, and their inherent goodness and equality before the law, with which Mr. Barr does not agree," Hackett suggested. This seems to be particularly true, she said, "if such persons are sexual minorities, religious minorities, or women exercising their moral consciences and asserting their right to liberty against the coercive power of the state or patriarchal religious institutions."

Speaking later with NCR, Hackett said some Trump administration policies have attacked the rights of LGBTQ citizens, of ethnic and religious minorities, and of women. "There have also been crimes against humanity at our southern border with people seeking asylum in the United States. Some of the treatment, I think, rises to the level of torture of children when you separate them from their parents."

Though supporting the goal of academic freedom and the university's policy of inviting speakers from diverse viewpoints, Barr seemed to take advantage of his Notre Dame forum, she said. Barr suggested that "his remarks also professed to comport with Catholic Christianity."

Nothing could be further from the truth, said Hackett.

"His positions are inconsistent with the theological anthropology of grace," she argued during her address. "By 'grace,' I mean God's work and presence within Creation, which is essential to Catholicism's commitment to the dignity of all persons, which, within Catholicism, grounds a person's right to religious freedom as a civil right."

On the other hand, the attorney general's "theology of grace" is disfigured, she said. "This appears to cause Mr. Barr to view his role as attorney general to be one of empowering certain religious institutions over the religious freedom and conscience of all Americans, whether religious or non-religious."

And that mindset, she concluded, "appears to explain why Mr. Barr feels licensed to dismiss certain outcomes of the rule of law, such as, for example, marriage equality, which is the result of reason, evidence and science applied within the courts throughout this nation. This disregard for the outcomes and commitments of the rule of law by the sitting attorney general should concern all of us."

Hackett intends to continue to address those concerns herself — as an attorney, law school professor, a person of faith, and perhaps as a representative in Congress for the 2nd Congressional District of Indiana.