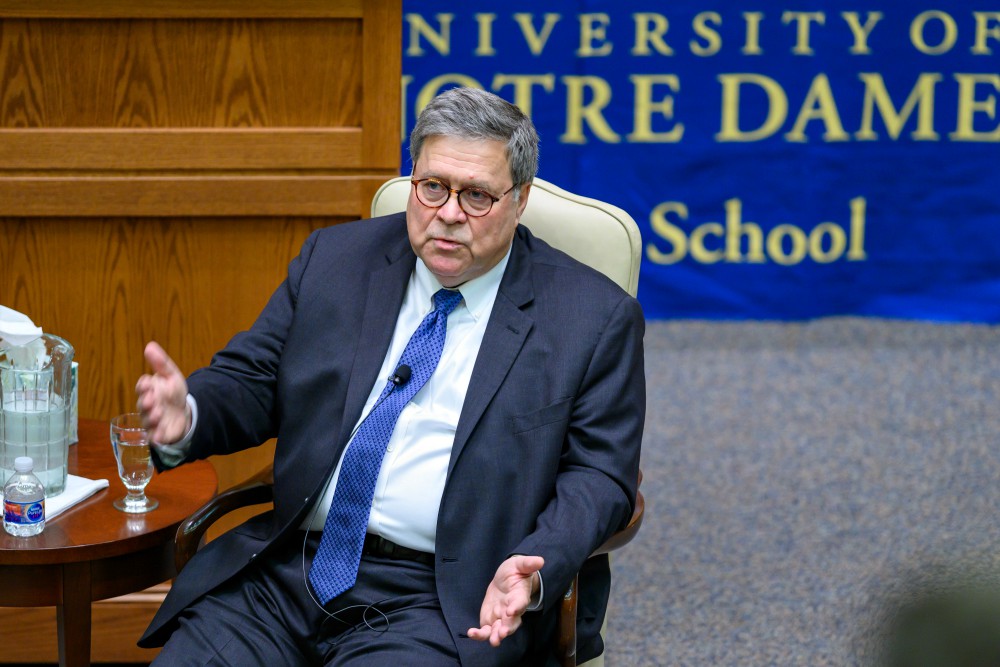 Last week, the attorney general of the United States, William Barr, gave a speech at the University of Notre Dame Law School. The event was co-sponsored by the de Nicola Center for Ethics and Culture. And it was a train wreck.

Some people took to Twitter to complain about Notre Dame even hosting this man, given his apparent willingness to do everything and anything possible to shield the president from legal trouble. Bosh. A major seat of learning should feel free to invite any member of Congress or Cabinet to speak on campus. I dislike the censoriousness that has blossomed improbably on the left. My rule of thumb: Draw the line at Holocaust deniers. Everyone else should be heard. If you do not like what the person has to say, argue with them. That is what universities, and public discourse more generally, should be all about.

In Barr's case, however, the appropriate response to his talk was embarrassment. The man may be brilliant, but his talk was ridiculously stupid.

"From the Founding Era onward, there was strong consensus about the centrality of religious liberty in the United States," Barr explained. "The imperative of protecting religious freedom was not just a nod in the direction of piety. It reflects the Framers' belief that religion was indispensable to sustaining our free system of government." Of course, the Bill of Rights was not applied to the states until the adoption of the 14th Amendment, ratified in 1868, and, in the case of religious liberty, the relevant clauses of the First Amendment were not applied to state and local government until the 1947 Supreme Court decision in Everson v. Board of Education of the Township of Ewing.

"By and large, the Founding generation's view of human nature was drawn from the classical Christian tradition," the attorney general opined. "These practical statesmen understood that individuals, while having the potential for great good, also had the capacity for great evil." I think most historians would argue that the understanding of human nature that animated the Founders was informed more by Hobbes and Locke, by Trenchard and Gordon, than by Bellarmine or any "classical Christian" tradition, a tradition that, in the late 18th century, was still riven between Catholic and Protestant. At least the attorney general could have rendered the noun in the plural as "traditions," recognizing that Aquinas and Calvin had rather different estimations of human nature and human government.

In explaining his understanding of the need for moral self-governance as a prerequisite for democracy, Barr states: "As John Adams put it, 'We have no government armed with the power which is capable of contending with human passions unbridled by morality and religion. Our Constitution was made only for a moral and religious people. It is wholly inadequate for the government of any other.' " If I had been in the audience, I would have asked Barr if Adams was part of that "classical Christian tradition." John Adams was many things but by the time of the Founding, he was no longer a Christian.

Then Barr embarks upon a dystopian account of our country that is Trumpian.

I think we all recognize that over the past 50 years religion has been under increasing attack.

On the one hand, we have seen the steady erosion of our traditional Judeo-Christian moral system and a comprehensive effort to drive it from the public square.

On the other hand, we see the growing ascendancy of secularism and the doctrine of moral relativism.

By any honest assessment, the consequences of this moral upheaval have been grim.

Virtually every measure of social pathology continues to gain ground.

It is interesting that these conservative Catholic public figures like Barr attribute increases in social pathology to "secularism" and "moral relativism," as if the emergence of a full-blown commercial culture, accompanied by spread-eagle capitalism, had nothing to do with the emergence of social pathologies. And as if Americans were not still the most churchy people of any industrialized nation. And as if "traditional morality" did not find ways to ignore racism and sexism and a different set of social and moral pathologies. And as if certain uniquely American social pathologies like gun violence are not largely unknown in very secular countries like Denmark and Norway. Causality is always a complicated thing and the attorney general's blindness to that fact is so obviously a consequence of his political need to fashion an enemy that is also an easy target.

I agree that social developments like the rise in single motherhood and increased drug use bring great misery in their wake. But focusing only on the negative, and attributing that negativity to particular causes in a facile way, is intellectually dishonest.

Barr seems incapable of recognizing any achievements since the 1950s. We did, after all create the Environmental Protection Agency, which cleaned up cities like Los Angeles and Pittsburgh. We did elect the first black president in our nation's history. We did achieve important treaties that limited the expansion of nuclear arsenals. We did witness women become CEOs and senators, though not enough, to be sure. We have cured illnesses and empowered those with disabilities.

And could not a lawyer mention the advances in the scope of the free exercise clause in the past 50 years? Has it all been ruin? By the way, some of my friends who have no faith are among the most moral people I know and the evangelicals cheering President Donald Trump at last week's Values Voter Summit have abandoned some of the most basic Christian moral stances, such as the moral obligation to offer succor to refugees.

"We are told we are living in a post-Christian era. But what has replaced the Judeo-Christian moral system?" Barr asked. "What is it that can fill the spiritual void in the hearts of the individual person? And what is a system of values that can sustain human social life? The fact is that no secular creed has emerged capable of performing the role of religion."

Silly me. I keep forgetting that the "role of religion" is to serve as a prop for Americanism. I thought it had something to do with an empty tomb and "casting the mighty from their thrones." Who is the utilitarian trafficking in relativism?

Alas, Barr gets an "F" when it comes to understanding Catholic morality. He stated, "Christianity teaches a micro-morality. We transform the world by focusing on our own personal morality and transformation."

That may be an accurate description of the spirituality of Opus Dei, to which the attorney general belongs. I have long argued that the checklist spirituality peddled by St. Josemaría Escrivá had a semi-Pelagian quality to it. But the real tradition is that spiritual transformation happens when and because we Christians reach out to the poor and the marginalized, not by "focusing on our own personal morality and transformation." It is the encounter with Jesus in the poor that transforms and evangelizes, not the other way round.

I was not sure if Barr was being ironic or not when he stated, "Those who defy the [secularist, progressivist] creed risk a figurative burning at the stake — social, educational, and professional ostracism and exclusion waged through lawsuits and savage social media campaigns." That may be true in certain academic venues but not at the law school or the de Nicola Center at Notre Dame.

No one should criticize Notre Dame for hosting a public figure who holds an office of consequence and public trust. But I would encourage my friends in South Bend never to ask Barr back. Not because I disagree with his conduct in office but because the lecture he gave last week was filled with nonsense. If this is the face of conservative public Catholicism, then to paraphrase the late Cardinal Francis George, we can say that the conservative Catholic project has exhausted itself.