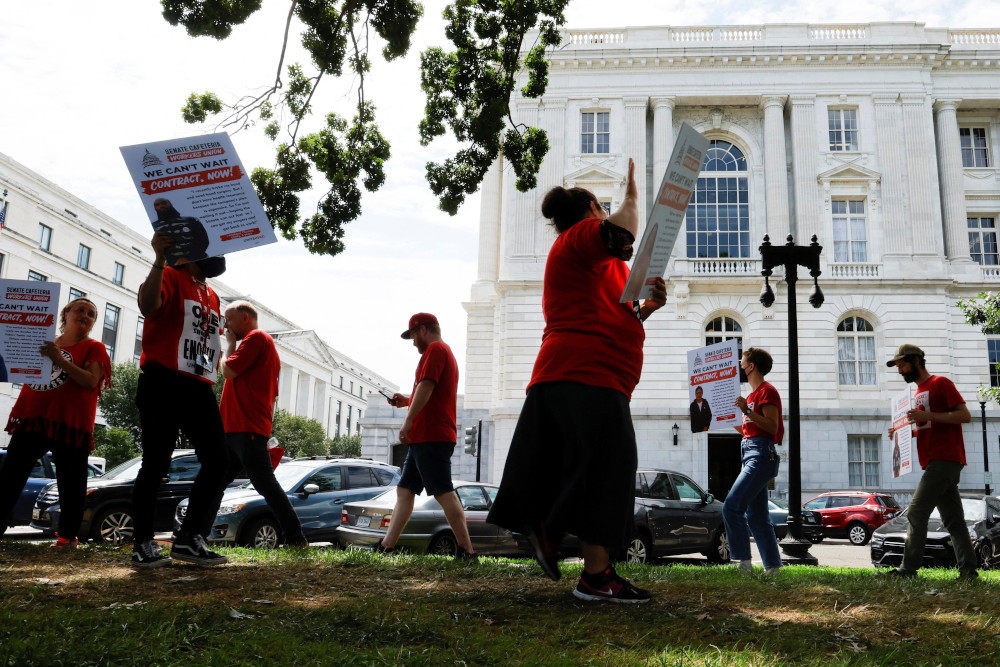 The number of Catholic institutions where at least some of its employees have union representation has grown to more than 600, according to the annual "Gaudium et Spes Labor Report" issued Aug. 24 by the Catholic Labor Network.

The number could be even greater, as most unionized Catholic workplaces have self-reported to the Catholic Labor Network, according to its executive director, Clayton Sinyai.

Most of these workplaces are concentrated in the health care and education fields, according to the report.

"There are more than 600 Catholic institutions in the United States modeling Catholic social teaching through collaborative, mutually rewarding relations of collective bargaining with their direct and indirect (contract) employees," Sinyai said in the report's preface.

The report takes its name from Gaudium et Spes, the Second Vatican Council's Pastoral Constitution on the Church and the Modern World. Approved in 1965, Gaudium et Spes is Latin for "Joy and Hope."

One passage in Gaudium et Spes proclaims: "Among the basic rights of the human person is to be numbered the right of freely founding unions for working people. These should be able truly to represent them and to contribute to the organizing of economic life in the right way. Included is the right of freely taking part in the activity of these unions without risk of reprisal."

"The hospitals alone employ more than 500,000 full-time employees and another 200,000 part-time workers. Tens of thousands of nurses, certified nursing assistants, technical staff, and other employees."

It added: "There are nearly 300 Catholic hospitals and health care institutions in the United States whose employees enjoy the benefits of union representation."

Sinyai, in an Aug. 30 phone interview with Catholic News Service, said the hospital has to be listed as a Catholic hospital in the directory of the Catholic Health Association to be included in the report. A hospital is deemed "Catholic" if it pledges to follow the 72 points in the U.S. bishops' Ethical and Religious Directives for Catholic Health Care Services.

"There are more than 600 Catholic institutions in the United States modeling Catholic social teaching through collaborative, mutually rewarding relations of collective bargaining with their direct and indirect (contract) employees."

In education, there are more unionized faculty at the elementary and high school level than in higher education. Sinyai, though, pointed to greater interest in organizing by adjunct professors at Catholic colleges and universities. One of the most recent of these organizing drives resulted in representation by adjunct faculty at Santa Clara University in California.

The report noted that four Catholic colleges are righting efforts of their adjunct professors to organize: St. Xavier University in Chicago, Manhattan College in New York City, Duquesne University in Pittsburgh, and Seattle University in Seattle.

At the college level, "tenured faculty on the other hand, are considered management employees; although they can and sometimes do form unions, the (National) Labor (Relations) Board will not protect them from retaliation if they do so," the report said.

Educators in Catholic grade schools and high schools face similar challenges. "Because they are directly operated by the church and charged with teaching religious doctrine to Catholic youth, the courts have exempted these schools from the jurisdiction of the National Labor Relations Act, citing the First Amendment's absolute protections of religious freedom," the report noted.

"This exemption does NOT mean that teachers lack the right to form unions and bargain collectively, just that the National Labor Relations Board will not protect them from those that might violate their rights," it added.

"The NLRB's absence does not absolve the pastor, school board or principal from the bishops' injunction that 'all the moral principles that govern the just operation of any economic endeavor apply to the church and its agencies and institutions; indeed the church should be exemplary,'" the report said, quoting the U.S. bishops' 1986 pastoral letter, "Economic Justice for All."

Among the remaining unionized workforces found in the report, a large share belong to Catholic Charities or Catholic Social Services affiliates and Catholic cemetery workers, while other institutions' food service workers or custodial staff have union representation.