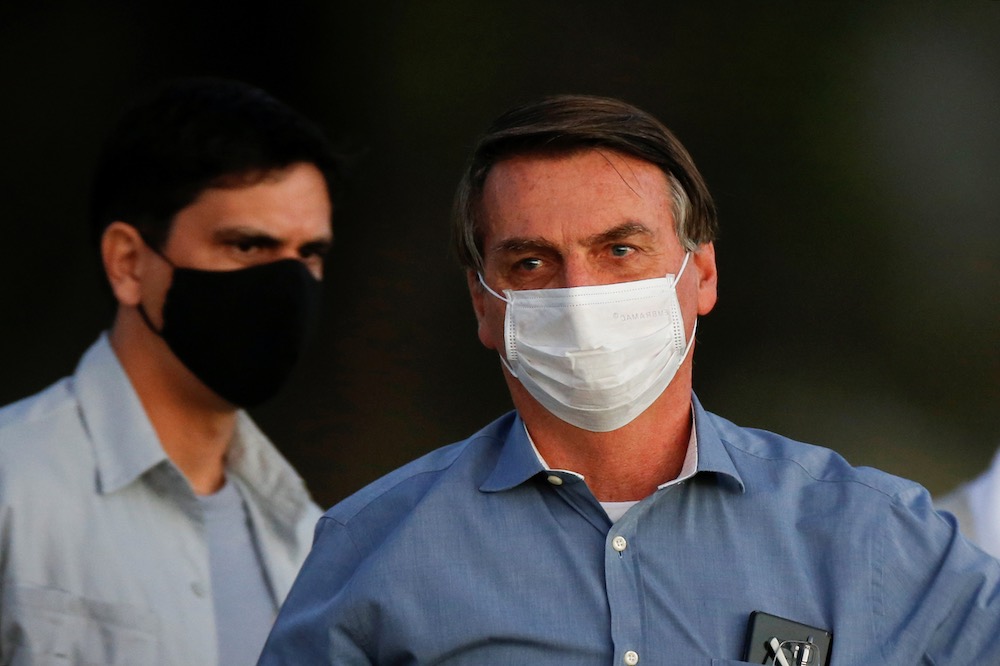 Brazilian President Jair Bolsonaro, wearing a protective mask, during a ceremony of lowering the national flag for the night July 24 at the Alvorada Palace in Brasilia. (CNS/Adriano Machado, Reuters)

A letter signed by 152 Brazilian Catholic bishops harshly criticizing President Jair Bolsonaro's administration and his unsuccessful handling of the COVID-19 pandemic has been spurring intense controversy among the country's Catholics since its release in late July.

As various groups expressed their support or disapproval of the document, backed by about a third of the country's bishops, some in the church began to fear that Brazil's sharp political polarization could be affecting its episcopate.

Titled "Letter to the People of God," a draft of the document was first leaked to the newspaper Folha de S. Paulo on July 26. The letter says Brazil is facing "an unprecedented health care crisis" and a "devastating economic collapse," which are the results of "the Federal Government's inability and incompetence to coordinate its actions."

The document generated strong reactions, especially on social media, but also in the church. "There has been an outraged reaction from some bishops," Fr. Antônio Manzatto, a professor at the Pontifical Catholic University of Sao Paulo, told NCR.

Manzatto is one of the signatories of two letters of support for the 152 bishops, released by a group of more than 1,500 priests. Although a number of members of the clergy expressed their disapproval of the document, there has as yet been no organized reaction from the opponents of the progressive group of bishops.

"The traditionalist wing of the Brazilian episcopate continues to be significant, but I think that the proportion of bishops who support the current administration is lower than 30%, which is roughly the percentage of Brazilians who still approve of Bolsonaro," said Manzatto.

The priests who criticized the letter did it on the internet, "the way Bolsonaro's supporters usually do," said the academic.

Sao Paulo Auxiliary Bishop Devair Araújo da Fonseca said a coordinated reaction from Bolsonaro's supporters among the bishops "would be a disaster."

Da Fonseca, who did not sign the original letter, told NCR he is not worried about further developments, but thinks it is inadvisable to give ammunition to groups that want to exploit division in the Brazilian church.

"The way that group of bishops chose to suggest such a debate was not convenient — as if there was something secret that was leaked," he said, referring to the fact that the bishops transformed their collective reflections into a kind of manifesto, which ended up being disclosed by the press before its official release.

"This [procedure] creates expectations among people, conspiracy theories, and sensationalism in the press," the bishop continued. "That's why the letter displeased the episcopate as a whole."

Da Fonseca said the letter of the progressive bishops could jeopardize the chances for political dialogue among Catholics.

Retired Humaitá Bishop Franz Josef Meinrad Merkel said he hesitated for some time before deciding to sign the letter.

"It doesn't look like a declaration that invites a dialogue," said Merkel, a German-born prelate whose former diocese is in the state of Amazonas. "It's a fierce and clear denouncement, but it doesn't leave an open door."

Merkel said he eventually concluded that it was a good initiative and that the letter had an honest, "even prophetic" tone.

"But I wouldn't like to be the one to shut the door and cut connection with the people who still believe that President Bolsonaro was their best option in the 2018 election," Merkel said. 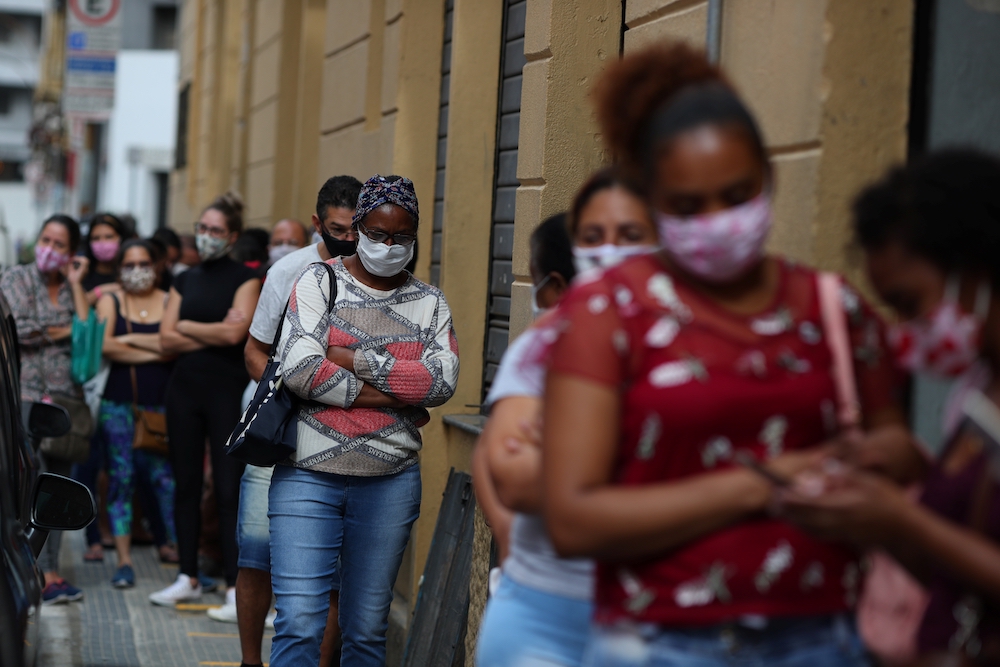 People wait in line to enter a shop June 10 in Sao Paulo during the COVID-19 pandemic. (CNS/Amanda Perobelli, Reuters)

The difficulty of criticizing the government and, at the same time, establishing a fraternal debate with its backers seems to be the result of unprecedented political polarization in the country, intensified since Bolsonaro's 2018 presidential campaign.

The situation has deteriorated in the past few months due to Bolsonaro's controversial approach towards Brazil's legislative and judicial branches of government, said Francisco Borba Ribeiro Neto, director of the Center of Faith and Culture at the Pontifical Catholic University of Sao Paulo.

Ribeiro Neto mentioned a recent article published by the Brazilian magazine Piauí that described how Bolsonaro considered sending troops to the Supreme Court on May 22, because of an inquiry into the president's alleged interference into police matters.

Bolsonaro ended up giving up the idea but discussed it for hours with members of his cabinet, according to Piauí's story.

"The current administration demonstrates inability to solve concrete problems, such as the pandemic and the deforestation in the Amazon," said Ribeiro Neto. "At the same time, it suggests the possibility of a disruption in Brazilian democracy. So, it's almost impossible for society not to react."

The situation poses a complex challenge for the church, given that it includes people from all segments of the political spectrum. "It's obliged to be very cautious," said Ribeiro Neto.

The academic said he thought the progressive group of bishops wanted to have enough support to transform the letter into an official statement of the bishops' conference.

"They failed to gain support from the moderate bishops because the formulations they used identified the letter with the left-wing," Ribeiro Neto argued.

Manzatto said the progressive bishops did not want to dominate the conference but demonstrated that "part of the episcopate is dissatisfied with the effects of Bolsonaro's mishandling of the crisis on the lives of the people of their dioceses." 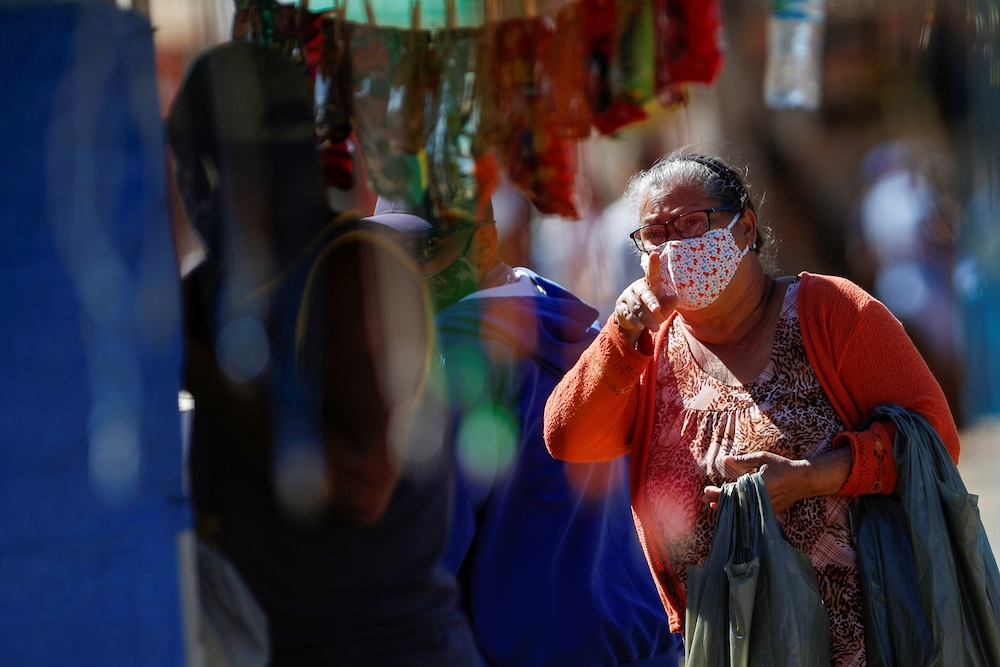 A woman wearing a protective mask gestures on a street in Brasilia, Brazil, July 7 during the COVID-19 pandemic. (CNS/Adriano Machado, Reuters)

"[The letter] has awakened different segments in the church that had been silent, which shows that the conservative wave in politics and in the church isn't dominant and that there is space for different expressions," said Manzatto.

The letter did not intensify the current divisions, said the priest, "but only show that they exist."

One of the signatories of the declaration, retired Blumenau Bishop Angélico Bernardino stressed that the letter dealt with a concrete problem.

"We can't stay with arms crossed with so many deaths," he told NCR. "There's so much disinformation on the pandemic. We need a national coordination to fight it."

Bernardino said the bishops "aren't against the government, but in favor of the people."

"There's much social injustice in the country," he said. "We certainly would have a larger group of bishops signing the letter if it wasn't for the pandemic, which created obstacles for being in touch with the others."

Sao Félix do Araguaia Bishop Adriano Ciocca Vasino, who leads a prelature in the Amazonian state of Mato Grosso, said he thought the Brazilian episcopate has a communion that bridges "different political attitudes and understandings of the social reality."

The Italian-born prelate said that the letter writers never wanted to create a majority among the bishops; the point was just to express their opinions.

"We would release the same letter even if the number of signatories was much lower," said Vasino. "During the military dictatorship [1964-1985], there were statements at times signed by groups of only seven bishops — and nevertheless they were important."

Vasino said the document's terminology had to be more straightforward than typical statements from the bishops' conference, in order to give the text more social and ecclesial impact.

"It had to be a letter that named names," said the bishop. "Considering all the fuss, I think it was successful."

The debate around the letter has touched a wide swath of Brazil's Catholic population, who are not usually so involved in ecclesial discussions. Vasino said that a pastoral council of one of the parishes in his prelature had harshly criticized the letter.

One of the effects of the 152 bishops deciding to release their letter during such a polarized time appears to have been to reinforce people's preexisting biases.

"That was a nonpartisan declaration, based on a concrete situation," said Maria Aparecida Grillo Elou, a progressive member of the National Council of the Laity of Brazil. "I supported it from the beginning."

Eliane Nazaré Silva, who is from the Amazonian State of Rondônia and a member of the ministry of faith and politics of the Catholic Charismatic Renewal movement, said the letter was "absurd."

"Here in my region, liberation theology still is very strong," she said. "Even though Bolsonaro isn't exactly a staunch Christian, the other side [the left-wing opposition] is much worse."

In one thing, however, Elou and Silva agree: Both of them think the bishops are right to manifest their opinion on politics.

"That's why the church in Brazil has a movement of faith and politics," said Elou, referring to one of the committees of the bishops' conference. Said Silva: "We can't wash our hands as Pilate did. We have to engage in politics."

For Vasino, the Brazilian bishops would give an important example to society if they could "establish a public dialogue and, despite the deep differences in their personal views, were able to keep treating each other as brothers."

"I believe Brazil has an urgent need of reopening dialogue in order to overcome its current impasse," said the bishop. "Polarization won't take us anywhere. The situation is becoming unbearable."

A version of this story appeared in the Sept 4-17, 2020 print issue under the headline: Bishops criticize Brazil's president.