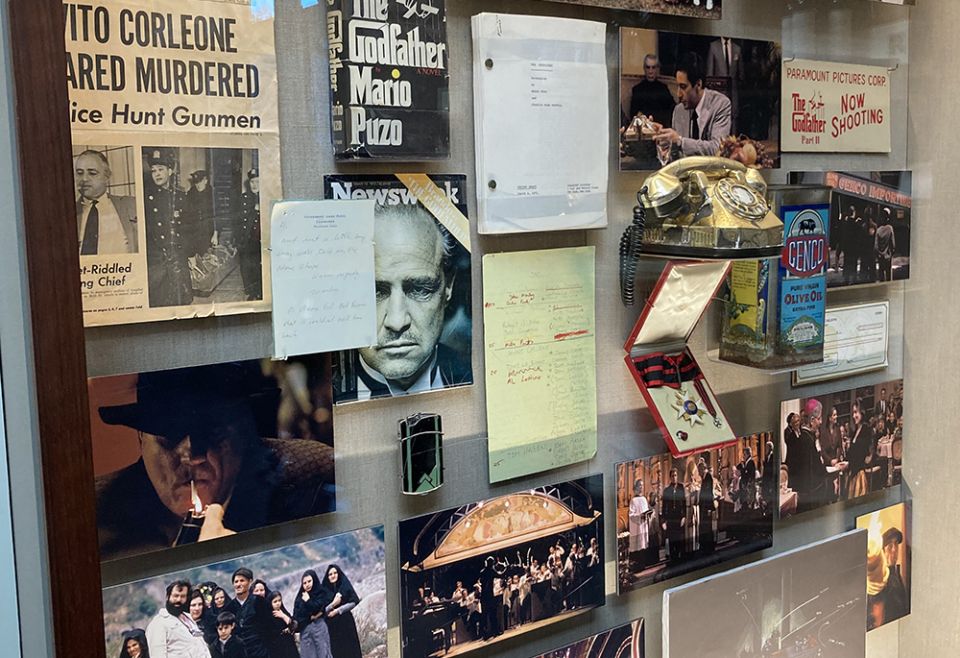 A display of artifacts from "The Godfather" at the Francis Ford Coppola Winery in Sonoma County, California (Courtesy of Sr. Rose Pacatte)

When Francis Ford Coppola was preparing to write the script for his 1972 Oscar-winning "The Godfather," he re-read Mario Puzo's best-selling 1969 novel on which the film is based. Coppola wrote in his 2016 book, The Godfather Notebook, that it revealed "a story that was a metaphor for American capitalism in the tale of a great king with three sons: the oldest was given his passion and aggressiveness, the second his sweet nature and child-like qualities, and the third his intelligence, cunning, and coldness. Suddenly I saw the story as one of succession and power."

This is the thing about "The Godfather," it is an American story, not an Italian or Sicilian story. As my friend Chiara, who lives in Rome, noted on my Facebook post where I asked for comments about the film: "From an Italian perspective, this to me always was the furthest and most exotic representation ever. It's like watching a Chinese saga."

As for the lasting influence of "The Godfather" in popular culture, Michael Danielson, a teacher at the Jesuit Seattle Preparatory School, asked his classes if any of them recognized the film's most famous quote, "I'll make him an offer he can't refuse." They did, he wrote on my Facebook post, but did not know its origin. None of the students had seen the movie or its two sequels, "The Godfather: Part II" in 1974 and "The Godfather: Part III" in 1990.

"The Godfather is one of those occasional, even rare, movies that elevates film as an art form," commented the Rev. Scott Young*. "It does this in several ways. It places us as insiders (silent participants) instead of removed observers. It requires us to look at evil sympathetically, without coercing us to condone the objectionable moral trespasses. Coppola operates as a godfather type (artistic visionary) to produce this magical immigrant crime genre film, that still generates spine chilling awe when screening it again."

Paulist Fr. Frank DeSiano commented on all three of the "Godfather" movies (1972, 1974, 1990) when he posted: "The Godfather Trilogy is one of the greatest parables of the illusion of power, both in what it cannot attain and in what it destroys on its path. This parable can be endlessly applied — into politics, into relationships and even into religion. Once power is its own purpose, it becomes demonic. And power at the service of something important must itself be restrained lest it become self-centered. 'My power is manifest in weakness' defines the opposite vision, one which, paradoxically and ultimately, wins." 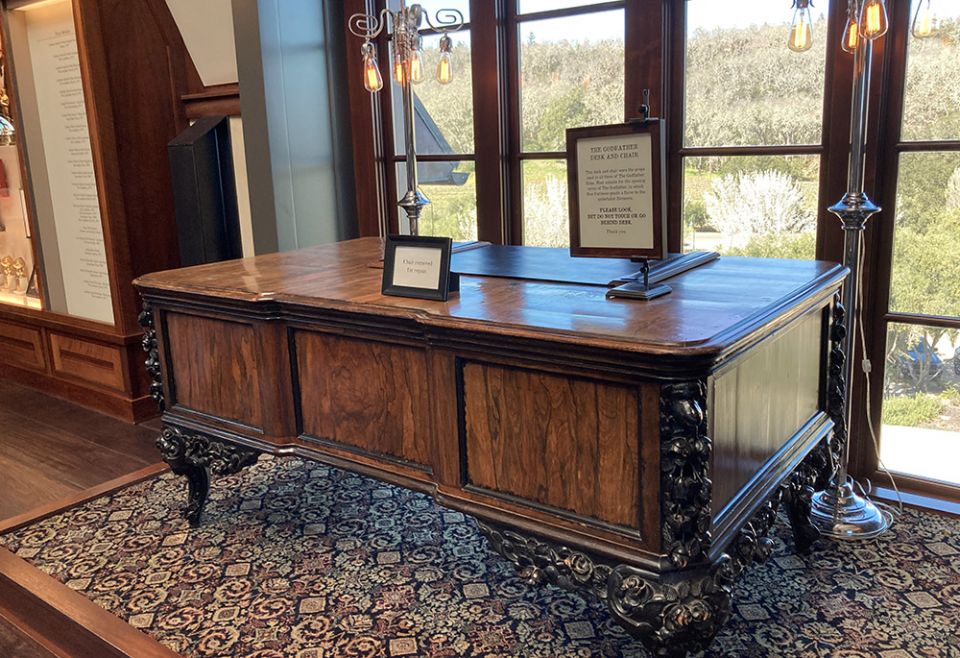 The godfather's desk from "The Godfather" at the Francis Ford Coppola Winery in Sonoma County, California (Courtesy of Sr. Rose Pacatte)

As I was watching the fourth season of "Yellowstone" on Paramount+ a few weeks ago, it occurred to me that the series is a retelling of "The Godfather." But instead of the Catholic iconography of the New York urban immigrant post-war reality, "Yellowstone" is set in Montana, the icon of the American West, of manifest destiny and white privilege.

"Yellowstone" centers on the dysfunctional and crime-committing Dutton family. At its core is patriarch John (Kevin Costner) with two sons, Kayce (Luke Grimes), Jamie (Wes Bentley) and a daughter, Beth (Kelly Reilly) a consigliere/underboss (Rip, played by Cole Hauser) and plenty of "soldiers." The family is in constant tension with Indigenous American tribes who want their land back (and offer an opportunity for repentance and restitution) and greedy, cutthroat corporations about dominance over the land and profit, not unlike the territorial mafia wars waged by the crime families of New York in the 20th century.

What is the legacy of "The Godfather"? Is it the many mafia movies that followed? It would seem like there is nothing like a powerful, violent, multigenerational, male-dominated family saga to entertain us, whether it's the Corleones ("The Godfather"), the Sopranos ("The Sopranos"), the Duttons or even the Roy family on HBO's "Succession."

Through the years and various iterations of the same story, the religious, ecclesial and artistic elements become backdrops and props. By the end of "The Godfather: Part III," religious faith is replaced without a thought to the divine by the oldest essential elements of the secular world: power, land and greed. There is beauty in the city, though it is diminished and marred by crime and human folly. There is the vacuous ritual of family dinners, and what little joy could be gleaned from families in "The Godfather" with the presence and innocence of unsuspecting children ends in violence and tragedy.

By seeking to possess everyone and everything, greed devours everything in its path. Just like power, as DeSiano notes above. The legacy is that in the grab for power, one dies alone, seemingly exterminated by a child playing with insect spray as happened to Vito Corleone.

However, "The Godfather" renewed the 20th century gangster film subgenre about organized crime and the mobs or gangs that ran them. The genre had practically died out due to the restrictions of the 1934-1968 Hays Code that would not approve films that showed killing, that crime pays or disrespect for police and authority figures.

After the establishment of the Motion Picture Association's rating system in 1968 that replaced the Hays Code (much like the U.S. bishops' conference's Office for Film and Broadcasting rating system replaced the Legion of Decency's code around the same time), a "New Hollywood" was born. Crime films like the biographical "Bonnie and Clyde" (1967) were produced and fictional mob films such as "The Godfather" and fact-based movies such as director Martin Scorsese's "Goodfellas" (1990) followed.

If there is one scene in "The Godfather" that everyone remembers, it is the baptism sequence at the end, where Vito's youngest son, Michael Corleone (Al Pacino), says the baptismal promises in church while the film cuts back and forth to his soldiers as they assassinate the competition, the heads of the other crime families. This is blasphemy at its best. By "The Godfather: Part III," Michael is trying to buy into the power of the church with tragic consequences. This third film is much better and more deftly constructed than critics in 1990 were willing to concede.

I think the biggest effect of "The Godfather" is that it spawned many Italian mafia-themed movies in the United States and catapulted the directorial career of Coppola. Perhaps one of the film's most well-known descendants is the HBO series created by David Chase, "The Sopranos." The series, starring the late James Gandolfini, ran from 1999-2007 and brought a gentrified crime family from the New Jersey suburbs straight into our homes over 86 episodes.

Many will say that "The Godfather" created or reinforced stereotypes of Italian Americans. In a 2012 interview with Smithsonian magazine, Tom Santopietro, author of The Godfather Effect, has a more optimistic view. He said that the film "changed Hollywood because it finally changed the way Italians were depicted on film. It made Italians seem like more fully realized people and not stereotypes. It was a film in Hollywood made by Italians about Italians." He also said that the film helped "Italianize American culture" and that other ethnic groups found "common ground" in a shared immigrant experience.

Not everyone agrees. We have two sisters in our U.S. province who were born in Corleone, Sicily, and came to the U.S. after World War II with their family. The now deceased older sister was not embarrassed by "The Godfather" but the younger sister was. She could not even hear the name of the film mentioned because "it makes it look like all Sicilians are criminals." Coming from Corleone didn't help, either.

*This story has been changed to correctly identify the Rev. Scott Young.

'A Wrinkle in Time' has powerful themes, but still underwhelms

On 'Nomadland' and finding a life for yourself in isolation