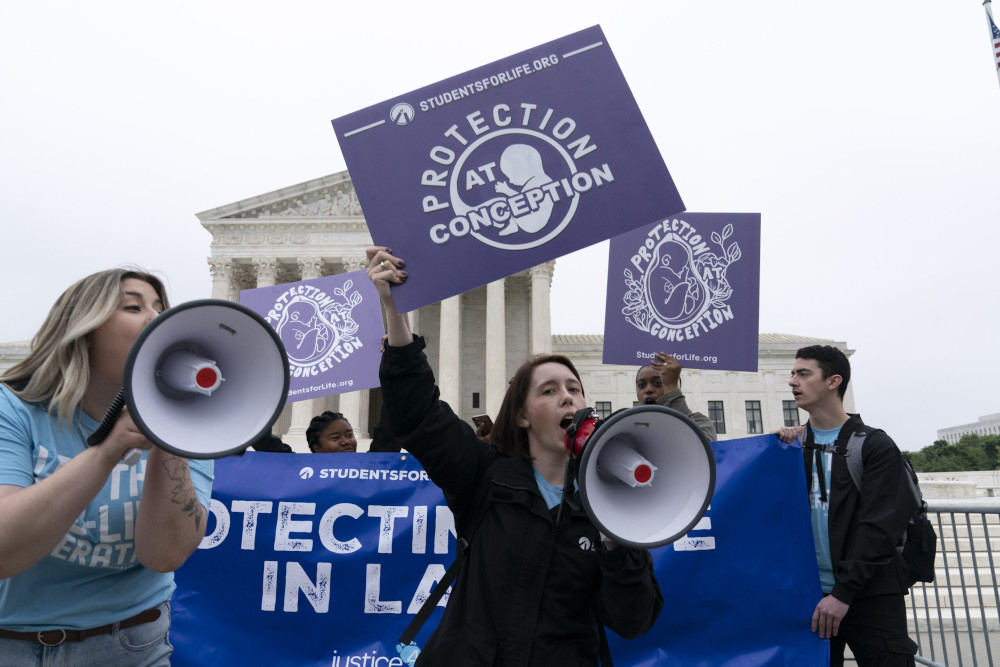 People demonstrate outside of the U.S. Supreme Court May 3 in Washington. (AP/Jose Luis Magana)

Although the American Catholic bishops have traditionally not endorsed political candidates or political parties, many bishops have made their preference for Republicans clear for everyone to see. They have embraced Republicans and shunned Democrats because the former have promised to restrict abortion while the latter have tried to make it easier for women to get abortions.

For many bishops, abortion is the most important issue because, they argue, abortion is a life-or-death issue, and you cannot enjoy any other human right without life.

Catholic bishops will celebrate this victory for which they have worked for decades, but ironically it should lead to a divorce between the bishops and Republicans. The GOP has nothing else to offer them. In fact, except for abortion, its proposals are the opposite of Catholic social teaching. The bishops got what they wanted out of this marriage; it is time to move on.

True, Republicans are also better on religious freedom issues, but here the bishops also got what they wanted. The Supreme Court's unanimous decision on the Boston flag case, Shurtleff v. Boston, shows the court will demand reasonable accommodation by government entities to religious views.

More importantly, the court's decision allowing a Philadelphia Catholic adoption agency to turn down gay couples means Catholic agencies will be free to impose conditions required by the bishops.

There will be national conflicts over abortion and religious freedom in the future, but these will be minor in comparison to these victories. Do the bishops want to stick with Republicans during this mopping-up operation, or do they want to work with Democrats on their other priorities?

Some may want Congress to go the next step and outlaw abortion nationwide. Republicans might try to do that after the midterm elections if they win both houses of Congress, but they would face a high hurdle in the Senate with a filibuster by the Democrats. And if the Republicans waive the filibuster and pass a bill, it would face a veto from President Joe Biden.

And even if Republicans eventually win both houses of Congress and the presidency, any bill they pass would eventually face repeal when the political tides turn and the Democrats return to power.

The Catholic bishops face a choice. Do they wish to maintain their alliance with Republicans and continue trench warfare over abortion, or do they declare victory and move on?

The Catholic bishops face a choice. Do they wish to maintain their alliance with Republicans and continue trench warfare over abortion, or do they declare victory and move on?

They might look to their European brothers for guidance.

In Europe, abortion was legalized through the legislative process or through referendum. It was not done by the courts. When the democratic process legalized limited abortions, the bishops admitted defeat. In Europe, the status quo on abortion is rarely challenged. The American bishops could follow a similar strategy in blue states.

When the expected Supreme Court decision comes down, the bishops can declare victory on abortion and turn their focus to social programs such as health care, day care, education, jobs and child tax credits that help women have and raise children so they are not forced to have abortions.

Or the bishops can continue the never-ending war over abortion.

My guess is they will continue to fight as long as there is no consensus in America on abortion. Consensus on a compromise may come someday, but only after years of trench warfare in the states. This will mean sticking with the Republicans and sacrificing all their other priorities.

Is this a wise choice?