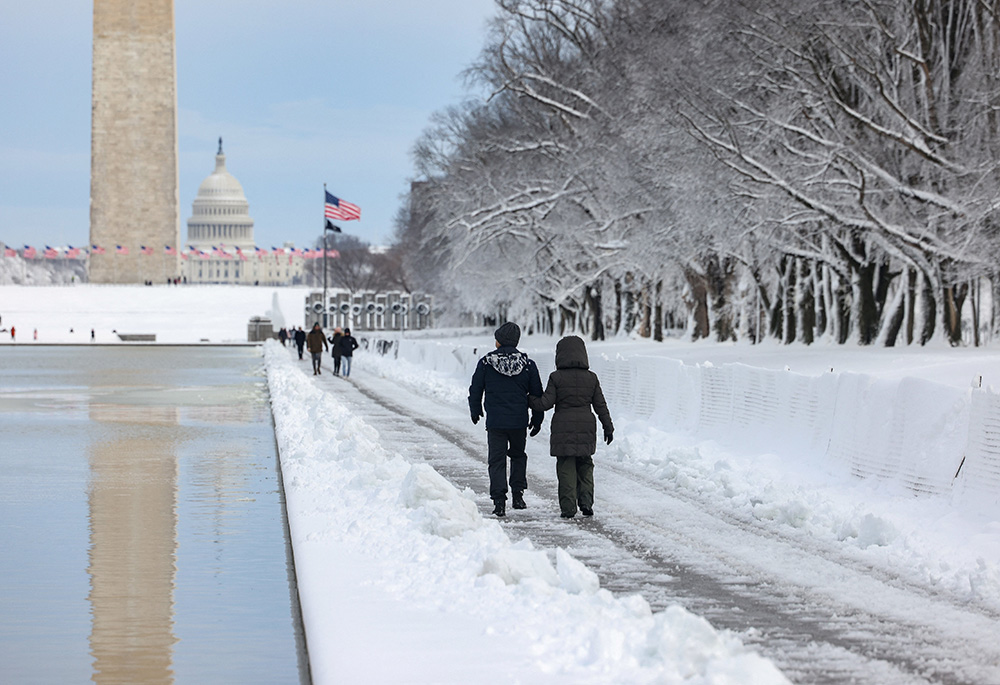 This is a dark hour. We cannot escape a pandemic that has killed hundreds of thousands of Americans. The gravest threat to the American republic since the Civil War — vividly displayed in the Jan. 6, 2021, attack on the Capitol — has not been fully vanquished. Extreme polarization and enmity undermine the common good and any sense of national unity. Rich special interest groups dominate both major political parties. The Supreme Court is filled with ideologues acting like legislators. Outrageous economic inequality continues unabated. And deaths of despair continue to climb. A lingering sense of precarity is omnipresent for what remains of the middle class, while neither social mobility nor basic security seems attainable for most Americans living in poverty.

At a time of widespread dysfunction, death and despair, what is missing is clear: solidarity. As a society, we lack a sense of responsibility for the common good and the well-being of others. We do not have the sense that we are all in this together. And this is what is needed to rebuild our democracy and challenge a throwaway culture that discards the vulnerable.

But if a pandemic could not engender a recognition that our flourishing depends on the flourishing of others, can anything?

Perhaps not. But perhaps the shared vulnerability we have experienced during the pandemic will reverberate and over time slowly undermine the hyperindividualistic culture that has proved so catastrophic.

For those who are not devoted students of Catholic social teaching or immersed in a communitarian culture, where solidarity is a deliberate choice or organically fostered, a key avenue for embracing solidarity is a recognition of our own vulnerability. When we depend on others, when we see how much their decisions affect our own lives, when we see how quickly our lives can be overturned by events completely out of our hands, we have a new opportunity to rethink our assumptions and remove our blinders.

The throwaway culture itself exists because people distract themselves from recognizing and responding to the reality that we are vulnerable. We will all experience sickness, suffering and death. All of our loved ones are vulnerable to disease and disaster. We necessarily depend on others — their care, assistance and mercy.

Instead of recognizing the very nature of our existence, many turn to alcohol or drugs, consumerism, the obsessive pursuit of wealth or material success, the quest for higher status or more sexual partners, and other distractions that can never deliver the communion and security they actually crave. But such distractions allow us to cling to the myth that we can be autonomous, isolated individuals — that we can achieve happiness without relying on anyone else.

Not believing that our lives are woven together or that we have responsibilities toward others, we feel free to use people instrumentally and discard them like inanimate objects. Disregarding our own vulnerability, we ignore that we too may one day be discarded by those who share this mindset.

Ideally we would not need to recognize our own vulnerability to see the value and worth of an Uyghur facing persecution in China, a student threatened by gun violence in their own school, a person with cancer trying to navigate our health care system to get proper treatment without going bankrupt, an unborn child in the womb of a poor single mother or a migrant fleeing gang violence in Central America. We would have a fixed determination to recognize the worth of all, as well as a relentless resolve to do whatever is viable to protect the lives and dignity of all.

But many in our culture, including most Catholics, place their political ideology or partisan allegiance above such principles — or any separate principles at all. Some Christians even try to privatize the Gospel — turning the faith into a watered-down self-help book that lacks vitality. A narrow, sometimes reckless, sense of self-interest shapes their actions, and they embrace libertarian policies that facilitate such selfishness.

So how can solidarity break through in such a culture? Through hot takes on social media? A statement from the U.S. bishops’ conference? A charismatic pope?

Probably not. Pope Francis has provided outstanding global leadership in addressing the throwaway culture. He has directly challenged American indifference. But he has mostly been met with a collective yawn in the U.S. The status quo remains largely unchanged, even during a pandemic.

For those who believe in solidarity, despair is understandable. Tens of millions of Americans won’t even wear a mask for 10 minutes in small, contained places in order to protect the lives of people around them, let alone rise to the challenge of the climate crisis or the country’s democratic backsliding. It is not surprising that many young people, who can see widespread indifference to injustice and suffering (and may very well be the ones suffering), are unwilling to bring children into this world. And it’s also not surprising that many millennials who do have children fear not just for their kids’ physical well-being in the future but their spiritual development in a culture that is so hostile and antithetical to authentic Christianity.

But suffering is not new. And generations in the past have seen progress in various areas stalled or completely reversed. Our choice is to simply give in to despair and give up, or to keep moving forward, building solidarity where we can and persisting even when its absence is acutely felt.

Perhaps the widespread vulnerability we are experiencing in this pandemic, while not immediately overturning the status quo, will provide a wedge that opens the door to real change in the future.

Instead of abandoning or scaling back our ambitions to serve and build the Kingdom, we may have to simply live with more disappointments and smaller wins. We may have to channel more of our ambition into the more intimate spheres of our existence (while never surrendering our commitment to the global common good).

If we are to have a revolution of solidarity, it may begin by spending more time with our kids, helping people who live on our own street or aiding the refugees assisted by our local Catholic Charities. It must begin by living with integrity in our own personal lives — being witnesses to the power of love, joy, virtue, authenticity and solidarity.

But perhaps the widespread vulnerability we are experiencing in this pandemic, while not immediately overturning the status quo, will provide a wedge that opens the door to real change in the future. Maybe conspiracy theories, authoritarian impulses and deadly libertarian policies will end up in retreat at some point, opening the door to a more participatory democracy, greater economic justice and policies that reflect a preferential option for the poor and vulnerable.

By encouraging people to come to terms with their vulnerability and to ponder the nature of loss (something we have all experienced during this pandemic), we can point out the vital link to solidarity. And by emphasizing this connection, we can slowly help to foster worldviews that are more oriented toward communion.

As the planet heats up, autocracy spreads and the problems in American politics seem intractable, embracing the long view seems grim. But chastened idealism is better than nihilistic cynicism. Now is not the time to give up.

A version of this story appeared in the Feb 4-17, 2022 print issue under the headline: Are we all in this together?.